Sitting high above Lhasa, atop the red Hill, lays the famous Potala Palace, one of the most historic sites in Tibet, and the winter palace of the Dalai Lama. Now a Buddhist and Tibetan Museum, and a World Heritage Site, the palace is one of the highlights of any Tibet tour.

The Potala Palace was a place of religious worship and politics and was considered the most important monastery in Tibet until 1965. You will need a permit - ticket to get into the corridors of the palace, however most of the exterior and some of the inner sections are free to the public. If you arrive an hour before closing there is a good chance you can enter for free. There is a large concrete square directly in front of the palace, and behind the palace, you will find prayer wheels and vendors selling yak butter.

History of the Potala Palace

The Potala Palace at Lhasa was founded by the 5th Dalai Lama in 1645, on the site of an ancient fortress built by the Tibetan king, Songtsen Gampo, throughout the seventh century. It is found on the Red hill of Lhasa, Tibet, and was named after the mythical home of the bodhisattva Avalokiteśvara. The 5th Dalai Lama was advised that the site was ideal as a seat of government in Tibet at the time, as it lay in the triangle formed by the old city of Lhasa and the monasteries of Drepung and Sera. To ascertain its design, the Dalai Lama sent lamas around all of Tibet to get some inspiration for the building from natural formations, and two lamas discovered an ideal mountain in the far west of Tibet, which they sketched and took back to Lhasa. This sketch became the main design for the palace. 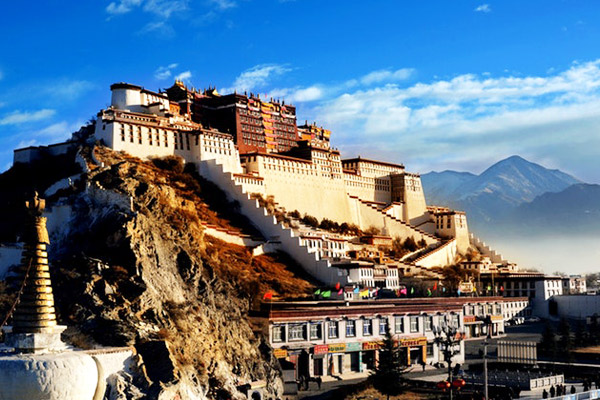 Since its beginnings in 1645, there have been many changes and additions to the palace, with the White Palace being completed in 1694, and the inner Red Palace being added between 1690 and 1694. While the external walls of the palace took just three years to build, despite being almost three meters thick at the base, the rest of the interior of the palace took another 45 years to complete and decorate.

The original fortress on the site had been struck by lightning and ravaged by wars that led to its destruction. After its rebuilding to its current form, it became the political center of Tibet. The Potala Palace has two palaces in it, the Red and the White Palace. The Red Palace signifies faith of the people, while the White palace was seen as the administrative heart of Tibet. This spot is well-known for its elaborate constructions, substantial buildings, and the peaceful atmosphere instead not to mention its stunning artwork.

Potala Palace is listed as the highest palace in the world, and houses artifacts and works of art from throughout Tibetan History, including paintings, murals, and ancient Buddhist artifacts. The palace also contains the gilded burial stupas of the past Dalai Lamas, and below ground lies the ancient meditation cave of the 33rd King of Tibet. In the east chapel sits the two-meter high statue of Tsongkhapa, cast from solid silver, while in the north Chapel lie the statues of the various Dalai Lamas of the last ten centuries, as well as the statue of the medicine Buddha and the image of Sakyamuni Buddha that was brought to Tibet by the Nepali princess, Bhrikuti, at the time of her wedding to Songtsen Gampo.

The White Palace of Potala Palace

The White Palace was the seat of Administrative power in Tibet until the building of the Norbulingka in 1755, after which it became the winter palace of the Dalai Lama. Home to more than ten consecutive Dalai Lama incarnations, the White Palace was the location of the government offices, government assembly halls, official courts, and many other offices for the minor officials of Tibetan governance. 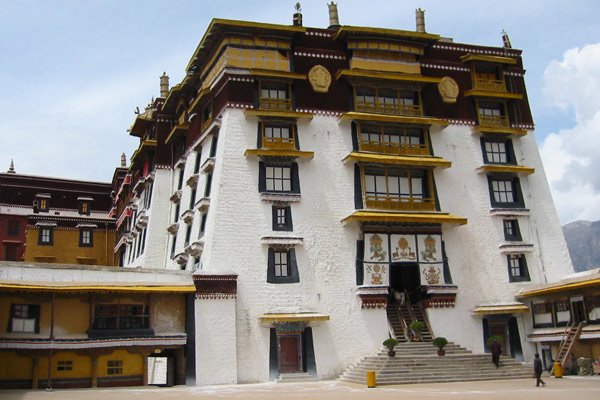 The White Palace of Potala Palace

Known locally as Potrang Karpo, the White Palace also included the living quarters of the Dalai Lama and many of the government officials of the time. It was extended to its present size at during the early 20th century by the thirteenth Dalai Lama, and the yellow-painted courtyard known as the Deyangshar separates the living quarters of the White palace from the Red palace. In this courtyard between palaces sits a large yellow-painted building, which houses the holy Thangkas and other religious paintings and banners that are used to adorn the Potala Palace during the Tibetan New year, Losar.

The Red Palace of Potala Palace

Just as the White Palace is the seat of government, the Red Palace is the home of Buddhism, and is devoted completely to religious study and prayer. Consisting of a complex layout of halls, libraries, and chapels on a multitude of levels, this complicated building is filled with winding passages and small galleries. 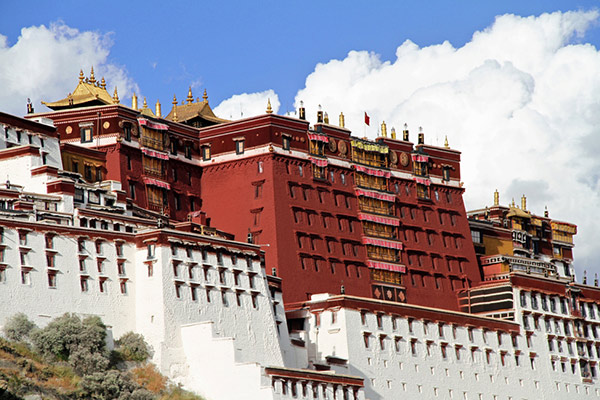 The Red Palace of Potala Palace

The main hall of the Red Palace is known as the Great West Hall, and consists of four chapels devoted to the fifth Dalai Lama. The hall is famous for its Persian-like murals, which depict the events in the life of the fifth Dalai Lama, with the most famous being the scene of his visit to the Shunzhi Emperor in Beijing. The columns and pillars of the hall are also wrapped with special cloths that were imported centuries ago from the fine weavers of Bhutan, famed for its delicate materiel.

The most famous chapel in the palace is known as the Saint’s Chapel, and it is one of the few remaining parts of the ancient fortress built in the 7th century. Below the chapel lies the Dharma cave where Songtsen Gampo was believed to have first studied Buddhism, in anticipation of his second bride’s arrival from China. Inside the cave are painted images of the Tibetan king and his four wives, Bhrikuti, Wencheng, Mi-nyag-bza' Zhyal-mo-btsun (from the Tangut people of northern China), and Ri-thig-man (from Zhangzhung, an ancient kingdom in Northwest Tibet that was conquered by the Tibetan King in the 7th century). The chapel contains a jewel-studded statue of Avalokiteshvara and two of his attending servants.

The Potala Palace is a stunning sight, sitting high above Lhasa on its Red Hill. One of the favorite sites for photography by foreign visitors, there are certain places around the city where you can get the most spectacular views of the palace, making your photography even more splendid. 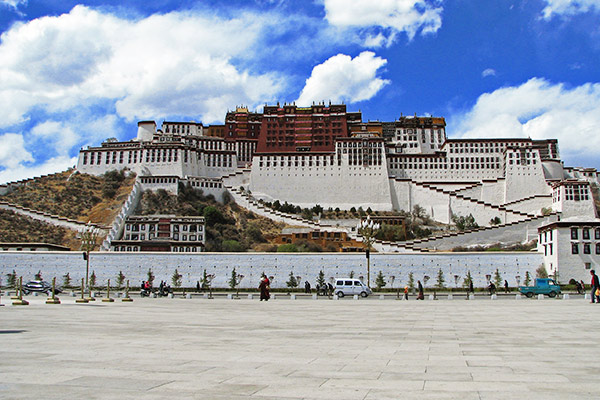 Chagpori Hill, also known as Yaowang Mountain, lies directly opposite Moburi, where the Potala Palace is situated, and on the cliffs around the hill you can find many statues of Buddha, some of which date back over 1,000 years. The top of the hill, facing the Potala Palace, is the best place to get good photos of the palace, and is especially stunning at sunrise and sunset. It is advisable to get up there early in the peak season to get the best spots for the sunrise, as the site can get very crowded with hundreds of people jostling for the best position.

Zongjiao Lukang Park, which lies next to the Potala Palace, is another good place to get great shots of the palace. Literally meaning “the back of the palace”, it is regarded by the locals as the best resort in Lhasa. Bridges, lakes, and delightful gardens full of flowers and trees fill the park, and the lakes are filled with fish. Birds nesting in the trees of the park have delightful songs as the sun rises in the morning, and it ia the perfect accompaniment to taking some great photos of the palace, and of the inverted image of the palace that is reflected in the lake.

One of the most stunning and most famous shots of Potala Palace is often taken from the Potala Palace Square, in front of the palace at the bottom of the red Hill. In the evening, the palace is lit by giant spotlights that shine from its gleaming white walls, and it makes for a stunning shot. Every morning, local Tibetans walk the kora route around the palace, which passes through the square, and the Potala Palace makes a great backdrop for shots of these devout Buddhists as they make their morning circumambulations of the site. However, make sure you get their permission before taking photos of the people, as they may not like being photographed.

The tickets of Potala Palace are often sold out, so it is recommended to buy tickets days in advance.

Tips before You Go

• Limited number of visitors is only 2,300 per day. In addition, for all visitors who take a Lhasa city tour for few days, they can only visit at the specific time printed on the admission ticket, and visits earlier or later than that time are refused.
• A 1-hour time limitation may apply.
• There are many steps at Potala Palace, so walking slowly is advisable to avoid possible altitude discomfort.
• Visitors should respect the rules while visiting. Do not wear hats or revealing clothes and do not step on thresholds.
• It is forbidden to take photos inside the Potala Palace.
• Security control is available at the entrance. Explosives, flammables, knives, cigar lighters and water are not allowed to be brought into the Potala Palace.

0 Comment ON "Fact of Potala Palace in Lhasa Tibet "