Traveling from Beijing to Lhasa is the most popular travel route from mainland China to Tibet. As the top destinations for tourists from all over the world coming to China, Beijing not only offers the heritages of the ancient emperors, but also is a city with fast development. To discover the mysterious life of Chinese ancient emperors in the Forbidden city, wander in the narrow Hutongs to experience the authentic local’s life, have a drink at the fashion bars in Sanlitun, or enjoy a piece of traditional Peking opera in the theater, you will have a clear mind of how China really is now from the capital. And the most famous Beijing to Lhasa train will take you directly to the snow land at the Tibet plateau. There are also flights from Beijing to Lhasa every day. 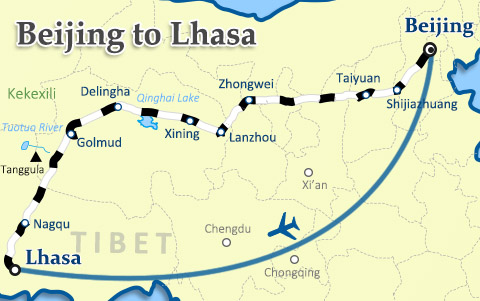 Our Beijing Tibet tour packages offer you the great chance to visit the two different centers together. Also, we select the most popular China Tibet tours starting from Beijing to take you to enjoy a panorama view of this oriental country. All of our Beijing Tibet tours include the transfer to Tibet, either by train or by flight. You can choose your favorite way to go or contact us to customize your own Tibet tour according to your need.

How to get to Tibet from Beijing

Beijing to Tibet by Train

Among all the trains to Tibet, the Beijing Lhasa train is the most popular one. The daily train departs from Beijing West Railway Station and arrives at Lhasa Railway Station on the third day after about 40 hours’ running. And the return train from Lhasa back to Beijing also departs daily from Lhasa railway Station. Since the train from Beijing to Tibet is one of the most popular railways in China, it is hard to get a ticket in the peak season. So if you plan to visit Tibet from Beijing by train in the summer holiday or the first week of October, make your reservation as early as possible.

Beijing to Tibet by Flight

Beijing to Xining and then to Tibet

It is highly recommended to get to Xining from Beijing first and then take the Xining to Lhasa train via the famous Qinghai Tibet railway. In this way, you can have some time to get used to the high altitude at Xining (2000 meters above the sea level) and enjoy the best part of Tibet train in just 24 hours, instead of the long time journey over 40 hours from Beijing to Lhasa. Since Xining is the starting point of Qinghai Tibet railway, you will have more chances to get a Tibet train ticket especially in peak season. 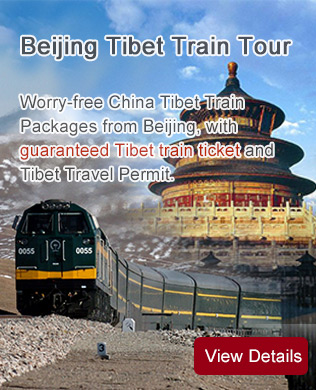