What is Altitude Sickness

For anyone who has ever get to Tibet, altitude sickness can sometimes be a problem. Often known as Acute Mountain Sickness (AMS), altitude sickness is caused by the lower oxygen levels at high altitudes above 1,500 meters, and while often not serious, if not treated properly, can become fatal.

Not everyone experiences altitude sickness when traveling to increased altitudes during his/her Tibet tour, and while it can affect some and not others, there is no guarantee that not having it on one trip will mean you will not get it on the next. Care should always be taken to try and avid altitude sickness as much as possible, and while there are some drugs that can help to treat the symptoms and prevent it altogether, even these dare not a guarantee that you will not experience some or even all of the symptoms.

What is High Altitude Sickness?

High altitude sickness is a series of symptoms that are caused by the lack of oxygen in the blood due to the reduced barometric pressure of the increased altitudes. When traveling to higher altitudes, the human body needs to have time to acclimatize to these new conditions. The body is easily able to adapt to the reduced oxygen content of the air, but it needs the chance to do so, and exertion at high altitude before the body is fully acclimatized can lead to severe AMS.

Acclimatization of the body to higher altitudes means that the chances of altitude sickness are reduced, but not removed altogether. The acclimatization process adjusts the body’s requirements for oxygen by increasing the concentration of oxygen in the blood, allowing travelers to breathe more easily in the increased altitude. However, every time you increase the altitude by more than 900 meters, you should spend some time acclimatizing to the increased elevation before continuing to travel higher, as the risk of AMS increases the higher you get.

The susceptibility of people to AMS differs from person to person, and can occur at any time, usually depending on the individual in question, as well as the conditions in which they are traveling. Altitude sickness symptoms can occur as low as 1,500 meters, although most people do not see any symptoms until they are above around 2,400 meters. Headaches are normally the first sign that there may be some symptoms of altitude sickness, and if the headache occurs with any of the other major symptoms, then there is a chance that altitude sickness is present.

The main symptoms of altitude sickness are:
-Headaches
-Loss of appetite, nausea, and/or vomiting; excessive flatulence
-Swelling of the hands, feet, and face
-Fatigue or weakness, dizziness and lightheadedness; mild to severe insomnia
-Nosebleeds; shortness of breath on mild exertion
-A persistent and rapid pulse
-Pins and needles feeling in the extremities (hands, feet, face) and a general feeling of malaise

There are also more severe symptoms that can indicate either a High Altitude Pulmonary Edema (HAPE) or a High Altitude Cerebral Edema (HACE), which can mean the altitude sickness is more serious and potentially life threatening. Such symptoms, if discovered, must be treated immediately, and the patient moved to a greatly reduced altitude.

How Does Altitude Sickness Occur?

Altitude sickness is caused by the lower oxygen levels at higher altitudes. With less oxygen in the air, it makes it harder to breath in the required amount to sustain the body at its optimum efficiency, which causes the first symptoms of AMS. 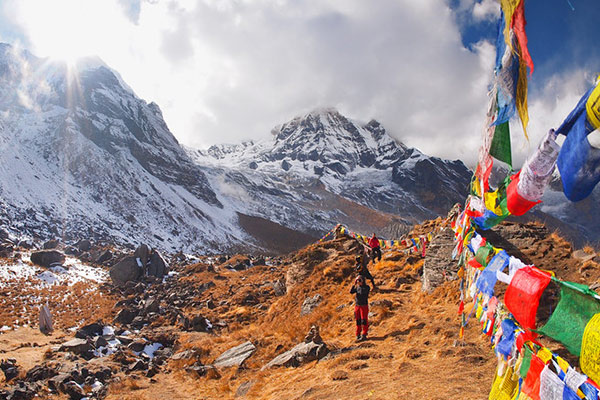 Altitude sickness is caused by the lower oxygen levels at higher altitudes.

As you ascend, the barometric pressure of the atmosphere decreases, which means the oxygen molecules are more spread out in the air, and each breath draws in less oxygen, which decreases more the higher you travel. This means that you have to breathe harder and faster to obtain the same amount of oxygen as at lower altitudes, and this is particularly noticeable with exertion, such as walking uphill. This is normal and as long as the breathing can decrease with rest, it should not pose much of a problem.

The rate of ascent, amount of exertion, and the level of altitude attained all have a major effect in the symptoms of altitude sickness, and the higher or faster you ascend, the more increased is the risk of developing the symptoms. The usual main cause of altitude sickness is a rapid ascent to an altitude above 2,400 meters from an altitude below 1,500 meters, such as traveling quickly from Kathmandu to Gyirong Town, or when disembarking from a pressurized aircraft at Lhasa Gonggar International Airport.

How to Prevent Altitude Sickness?

In most cases, the symptoms of AMS are temporary, and once the body can acclimatize to the increased altitude, they will abate quickly. However, it is important that you acclimatize properly, at the correct altitude levels, for the symptoms to reduce and disappear. Failing to properly acclimatize can result in more severe symptoms, which are potentially fatal. 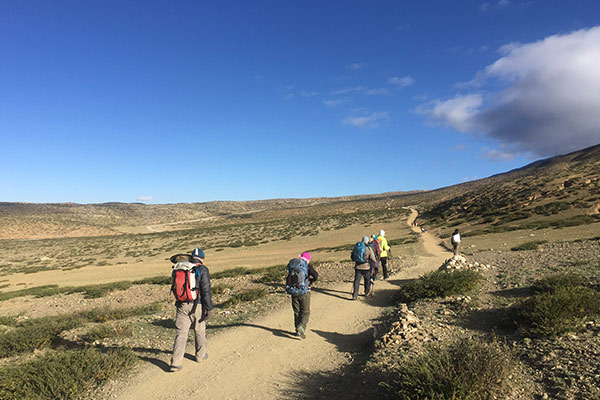 Ascend slowly once you are at altitudes of above 3,000 meters.

Acclimatization is the process of the body adjusting to the decreased availability of oxygen at high altitudes. It is a slow process, taking place over a period from just a few days to several weeks. The best way to prevent altitude sickness is to ascend slowly once at altitudes of above 3,000 meters. It normally only takes a day or two for the body to acclimatize to the increase in altitude, although in some cases it has been known to take longer. This often depends on the physical condition of the traveler, as well as other factors such as alcohol consumption, dehydration, and smoking.

The best ways to prevent altitude sickness when traveling to higher altitude in Tibet are to follow a few simple precautions, which can help stave of the risk of AMS. Avoid flying direct to high altitude areas of above 3,000 meters of possible, as the sudden change in pressure from the pressurized aircraft cabin to the low-pressure of Lhasa can be detrimental. You should also take at least 2-3 days before traveling to higher altitudes above 3,000-3,500 meters.

Prevention before Your Tibet Tour

If you are planning to travel to the increased altitude of Tibet, then there are some precautions that will reduce your chances of experiencing the symptoms of AMS. While it is recognized that fitness is no bar to altitude sickness, those who are physically fit do tend to have a better chance of resilience to the symptoms of AMS. It is also essential to get yourself checked out by your doctor prior to travel, especially if you have any ongoing medical conditions. Simple illnesses such as sinus infections, colds, flu, bronchitis, and even urinary tract infections can be at greater risk of developing AMS. If medications can be provided to help prevent AMS at high altitudes, your doctor can prescribe them for you. 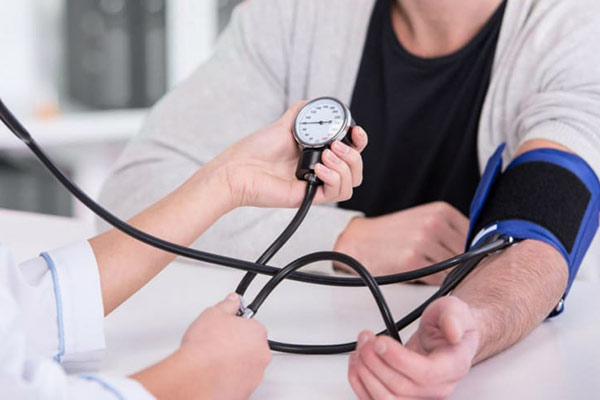 Get yourself checked out by your doctor before your Tibet tour.

Hydration is a key factor of AMS, and one of the main reasons people develop the symptoms is due to dehydration from the long travel to Tibet. Caffeine and alcohol ingestion are major reasons for dehydration, and should be avoided for at least 3-4 days before travel. 2-3 liters of water per day is recommended for several days before travel, to over-hydrate the body to aid in preventing dehydration when traveling, and keeping plenty of water with you to drink on your journey to Tibet is essential.

Rest is a key element in the prevention of AMS, and sleep or rest schedules are often disrupted by long air travel, leaving you more susceptible to developing AMS. Arriving tired at high-altitude destinations means your body is not at its best to counter and acclimatize to the increased elevation. If you are traveling to Tibet from far away, then it is best to take a couple of days rest in your hotel in either Nepal or China before making the trip to Lhasa.

Education is the best way to avoid AMS in Tibet. Knowing how and when to ascend, the symptoms of AMS, HAPE, and HACE, and the various treatment methods is one of the best ways to avoid the illnesses. Ensure you are knowledgeable on the causes, symptoms, and treatments of AMS and follow the guidelines, and it can help to reduce your risk of developing the symptoms. Many people who develop AMS either do not have the basic knowledge of altitude sickness, ignore the first symptoms, or fail to understand how to treat the early signs.

Prevention During Your Tibet Tour

Resting on your arrival in Lhasa is one of the first ways to help reduce the risk of AMS whilst in Tibet. Many people think that because they do not have the symptoms immediately they arrive, that they will not get it. However, symptoms can show as much as 48 hours after arrival, if not acclimatized properly, or maybe even not at all, but it is not worth the risk. Resting for the first few days, and not doing any strenuous exercise can help to reduce the risk of developing the symptoms of altitude sickness and help the body to acclimatize better.

Climbing or ascending more than 500 meters per day should be avoided if possible, and one should take at least a one-day rest after ascending more than 900 meters. Hydration is very important in preventing AMS, as the lower pressure of the atmosphere can cause dehydration of the lungs. Alcohol and smoking should be avoided while at higher altitudes, and you should avoid strenuous exercise for at least the first 24-48 hours.

Diet can help with the prevention of AMS as well, and your meals for the first few days should consist of foods that are high in proteins and calories, but low in carbohydrates, as these have a detrimental effect on the digestive system at high altitudes. Plenty of vegetables is recommended, as is high-protein/low carb meat such as chicken and fish. Meals should also be small and regular, to avoid overeating which can cause discomfort and stress, which in turn can increase the risk of altitude sickness.

The drugs, Acetazolamide and Dexamethasone, have been known to have some success with preventing the symptoms of AMS, and are widely believed to help acclimatization to the increased altitude more quickly. However, even when taking the drugs, it is still recommended that you follow the same ascension procedures when traveling to higher altitudes, and you should always seek the advice of your own doctor before taking the any drugs for AMS.