World Records of the Qinghai-Tibet Railway

In northwest China, in the province of Qinghai is the city of Xining. The capital of Qinghai Province, Xining is a city of around 2.2 million inhabitants, and has several tourist attractions of its own, including the Ta’er Monastery of the Gelug sect and the Dongguan Mosque, one of the most famous mosques in the northwest region of China.

However, in more recent years, Xining has become famous for something other than its heritage and religious temples - Qinghai-Tibet Railway. This unique railway was built as the first railway to connect China with Tibet Autonomous Region, and is now a major route for both tourists and goods to the region on the plateau. In 1959, Xining was connected to China’s main rail network with the Lanzhou-Xining Railway. The railway was later extended into the Qaidam area to Golmud, near Qinghai Lake, and in 2006 the unique railway line connecting Golmud to Lhasa, in Tibet, was finally opened.

The Qinghai-Tibet Railway from Xining to Lhasa was finally opened on July 1st, 2006, after many years of construction in some of the most hostile environments in the world. It runs for 1,956 kilometers from Xining to Lhasa, and majority of the line lies on the Qinghai-Tibet Plateau. The railway ended Tibet’s history with no rail transport, and paved the way for an increase in tourism in this high-altitude region, often known as the “Roof of the World”. 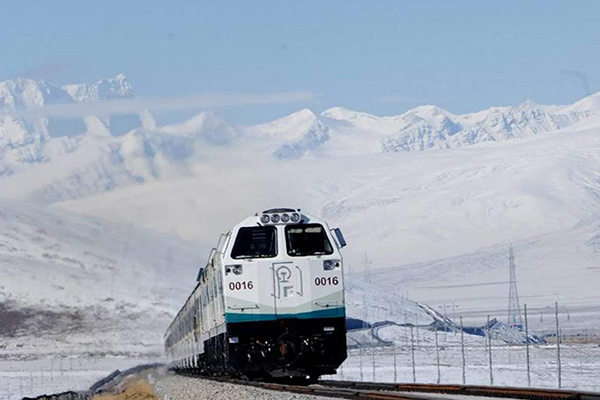 Qinghai-Tibet Railway running on the roof of the world

Many experts around the world said that it would be impossible to extend a railway across such an inhospitable region, and no amount of technical engineering could conquer such a difficult task. However, the entire world was shocked when the Chinese government announced the completion and opening of the Qinghai-Tibet Railway, also known as the Qingzang Railway. Since it first opened, it has become one of the busiest railway lines in Asia, transporting millions of passengers a year to the heady heights of Lhasa, and the plateau. Tourists come from all over the world to experience the unique lifestyle and culture of the Tibetan people, and to see the wondrous sights that exist in this amazing land of snows.

The railway that runs from Xining to Lhasa is unique in many ways. Often known as the “Sky Road”, this railway has more entries in the Guinness Book of Records than any other single structure in history. And it is likely to be continuing that tradition, with the extension that is currently, albeit slowly, being built to connect Lhasa with Kathmandu, in Nepal. The extension has already reached as far as Shigatse, a prefecture-level city in Eastern Tibet. Opened to the public on August 15, 2014, this extension line reaches altitudes of around 4,000 meters, and runs for a total of 248km across the Qinghai-Tibet Plateau. 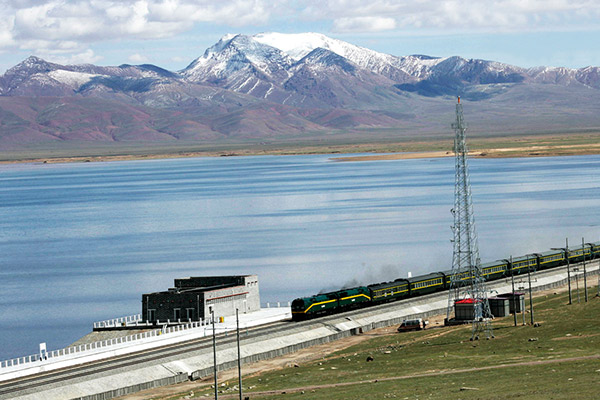 In 2015, China announced its plans to further extend the Lhasa-Shigatse line on into Nepal, finally linking Kathmandu with Beijing. And again in 2016, it was stated that the much-needed link between China and Nepal could be completed as soon as 2020. And this is something that the Nepalese people would welcome, as it would increase tourism to Tibet through Nepal, as well as bringing much needed trade to the country.

With the completion of the Qinghai-Tibet Railway, it became the highest railway in the world, with more than 960 kilometers of the track at altitudes above 4,000 meters, and with its highest point reaching 5,072 meters at the Tanggula Mountain Pass. This broke the record of the previous highest railroad, which is in Peru, and runs across the Andes from Lima to Huancayo, at an altitude of 4,829 meters. 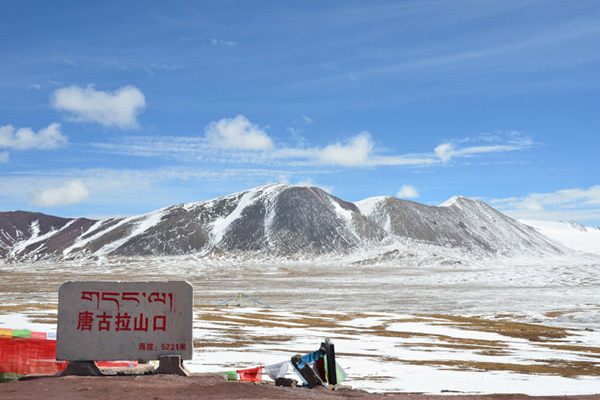 The Qinghai-Tibet Railway is the longest “plateau” railway in the world, with a total distance of 1,956 kilometers. Ideally, a plateau is defined as an area of high land that usually consists of a relatively flat terrain. The Tibetan Plateau is the largest in the world, with an area of 2.5 million square kilometers, giving it an advantage over other similar plateau railways. The only plateau that extends for more than 1,000 kilometers in diameter is the Antarctic Plateau, which includes the South Pole. 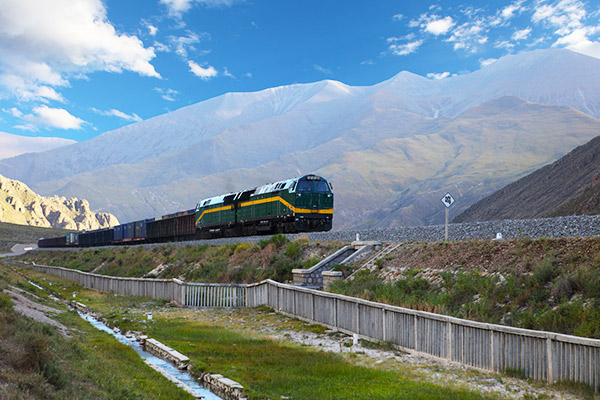 Qinghai-Tibet Railway is the longest “plateau” railway in the world

Tanggula Station, also known as Dangla Station, is the world’s highest railway station, at an altitude of 5,068 meters above sea level. This is more than 230 meters higher than the previous record station at Ticlio, in Peru. The station is unstaffed, due to the extreme temperatures and altitude, as well as the fact that it is seldom used, although there are local Tibetan people who live in the area. It is also 1.25km long and covers an area of 77,002 square meters. The location of the station at Tanggula was chosen specifically for its spectacular views from the station platform. 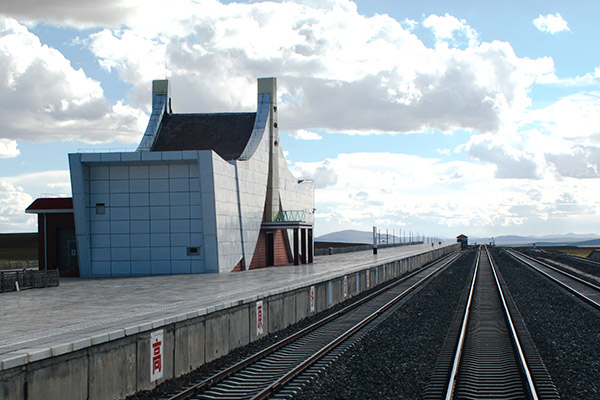 Sitting at an average elevation of 4,905 meters, the Fenghuoshan Tunnel is the highest railway tunnel in the world. It is 1,338 meters long, and is located in the sparsely populated Zadoi County of Qinghai, at the eastern edge of the Hoh Xil Mountains. Moreover, the entire tunnel runs through permafrost, which is ground that is permanently frozen at temperatures of -0℃ or lower all year round. "Fenghuoshan" is Chinese for "Wind Volcano". 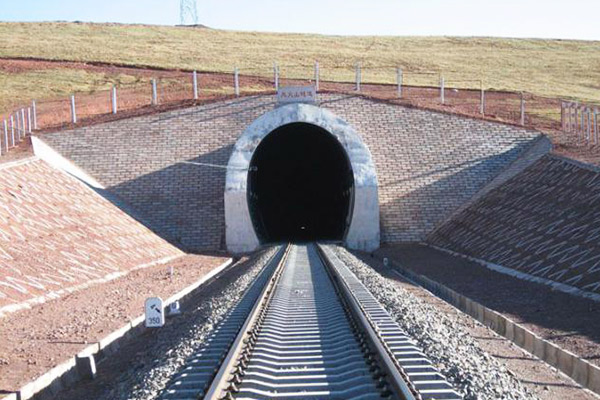 The Kunlun Tunnel, with a total length of 1,686 meters, is the longest tunnel in the world built through frozen earth. The tunnel goes through the Kunlun Mountains at 4,095 meters above sea level, making it one of the highest tunnels in the world, giving the Qinghai-Tibet Railway two of the world’s highest tunnels in one stretch of track. The Kunlun Mountains are one of the longest mountain chains in Asia, extending more than 3,000 km. In the broadest sense, it forms the northern edge of the Tibetan Plateau to the south of the Tarim Basin and the Gansu Corridor, and continues east, on the south side of the Wei River to end at the North China Plain. 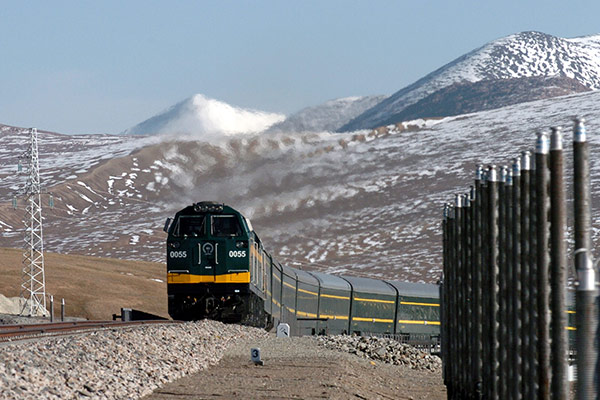 Qinghai-Tibet railway running on the frozen ground in Kunlun Range

While it may not be one of the things that people think is record-worthy, having a construction site at an elevation of 4,704 meters is a feat in itself. Amdo Construction Site is the highest railway construction base in the world, and was a major factor in the completion of the Qinghai-Tibet Railway. The site was a storage and distribution center for most of the construction equipment and materials that were used in the building of this amazing railroad. 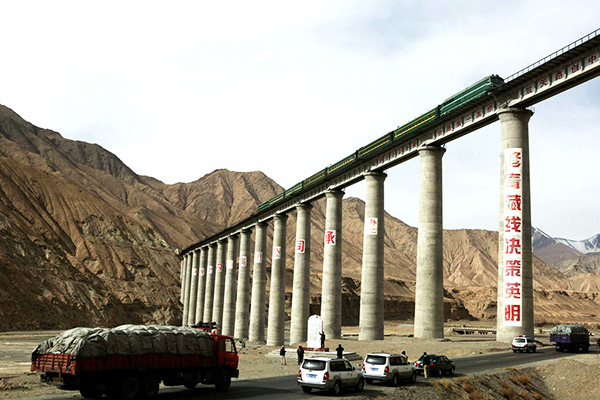 Qingzang Railway has a construction site at an elevation of 4,704 meters

That is six world records for the Qinghai-Tibet Railway, more than any other single structure in history. And when it comes to world records, Tibet does not stop there. Apart from being half-home to the world’s highest mountain, it also boasts: 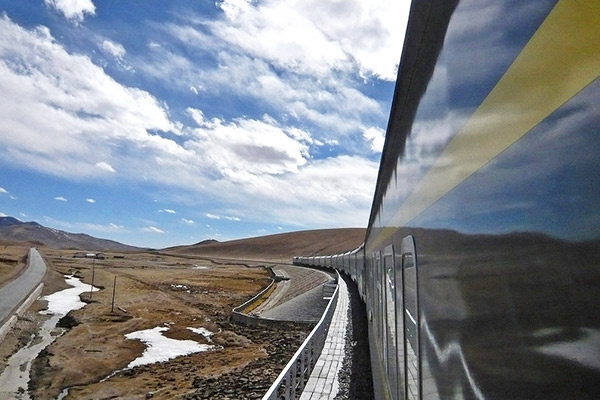 1. The highest trail in the world, which is an eight-mile long section between Khaleb and Xinji-fu, in Tibet. There are two parts of the trail that exceed 6,096 meters.
2. The world’s highest settlement, at 6,035 meters, is a small village on the T'e-li-mo trail, in southern Tibet.
3. Wenzhuan, in Tibet, is the world’s highest town, at 5,100 meters above sea level. It was founded in 1955 and is on the Qinghai-Tibet Highway just north of the Tangla Road.
4. The Yarlung Zangbo Valley, according to the Guinness Book of Records, is the world’s deepest valley. At a point between the peaks of Namche Barwa (7,783 meters) and Jala Peri (7,281 meters), which are 13 miles apart, it has been recorded as being 5,075 meters deep.
5. Just outside Lhasa is the airport, known as the Lhasa Gonggar Airport, which stands at 4,366 meters above sea level, and is rated as the highest airport in the world.