The Qinghai Tibet Railway, which runs from Xining in Qinghai Province to Lhasa in the Tibet Autonomous Region (TAR), is the world’s highest railway and the main train route to Lhasa from mainland China. Stretching for 1,956 kilometers across the vast Qinghai Tibet Plateau, this unique railway is a massive feat of engineering and an amazing way to experience a Tibet tour of the region.

The elevation along the railway line changes constantly and it is this constant change in altitude that provides travelers with some of the most outstanding landscapes and scenery of any train journey anywhere in the world. This amazing scenery along the route of the Qinghai Tibet train is the major highlight of the entire trip by train to Lhasa, and even this can change from season to season. 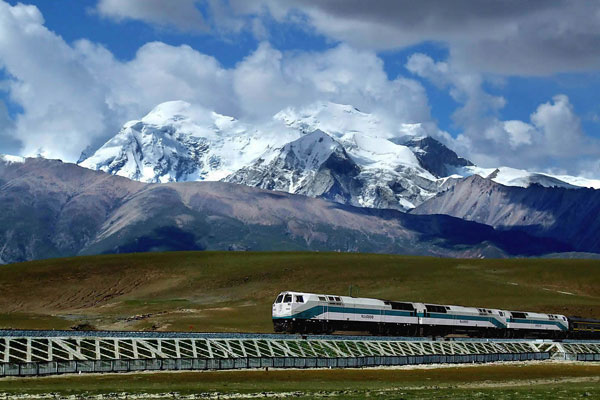 The scenery can be divided into three main sections, all of which are different and have their own individual qualities and highlights. The three main sections are from Xining to Golmud, from Golmud to Nagqu, and from Nagqu to Lhasa.

The first part of the trip to Lhasa from Xining is the stretch that runs to Golmud, where the train starts its steep climb up to the higher altitudes of the Tibetan plateau and the high mountain ranges that fringe the northern boundaries of Tibet Autonomous Region. While these views may not be as amazing as those from Golmud onwards, with their spectacular plateau landscapes, there are plenty of things to see from the windows of the trains between Xining and Golmud.

After departing from Xining, the first of the amazing sights you will be greeted with is the awesome Qinghai Lake, the largest lake in China. Just 150km outside Xining the lake comes into view as the train nears it, and passes alongside this vast body of salt water at an altitude of around 3,260 meters above sea level.

The lake stretches for miles in both directions, and the stunning blue waters of this beautiful lake are backed by the distant snow-clad mountains that lie to the south of the Gobi desert.

Yardang Landform on the Qinghai-Tibet Railway

Another of the most visually impacting sights along the route to Golmud is the Yardang Landform that lies just outside this small Qinghai town. Caused by wind erosion and wear from dust particles in the air, these small hills are sloping rock formations that are like waves in the landscape, strung out in lines and waves along the area close by Nanbaxian Village, just outside Golmud.

However, these are not the only amazing sights along this stretch of the railway line. After the amazing sight of the Qinghai Lake, comes the astounding Qarhan Salt Lake, known locally as the “Sky Mirror” because of the way the lake perfectly and clearly reflects the blue cloud-dotted skies above. Stretching for more than 160km from east to west, this vast lake is the repository of almost all of the salt sold in China. 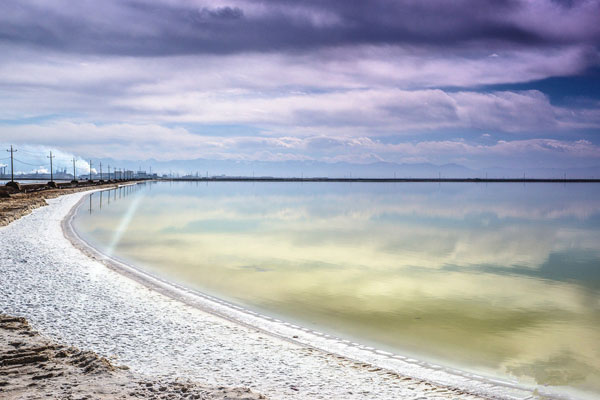 It is estimated that this single lake alone could provide enough salt for the entire population of the planet for around 1,000 years. Part of the railway line to Golmud from Xining actually sits on the lake itself, built on the salt deposits of the lake, so you get an awesome view of the lake and the salt it provides as you pass by.

Tips:
One of the disadvantages of this route is that the train departs from Xining at around 2:00pm and arrives in Golmud at 8:53pm, when it is already dark.

This means that the trip from Delingha to Golmud, which passes by Qarhan Salt Lake and two of the most beautiful small twin lakes in Qinghai, dubbed the “lover lakes”, is done in darkness so these beautiful lakes are often missed.

The section of the journey from Golmud to Lhasa is the most breathtaking in terms of landscapes and scenery, and is one of the most exciting stretches of the journey. The train takes its route from the Qaidam Basin in Qinghai to the snowy mountains that stretch along the plateau to the north of the TAR.

While it may be dark for most of this stretch of the route from Golmud to Nagqu, as the sun rises in the east, the train speeds over the famous Tanggula Pass and into the TAR for its journey to Nagqu.

After departing from Golmud, the train starts its steep climb but into the Kunlun Mountains, which form part of the Transhimalaya that stretches across the north of the plateau region. 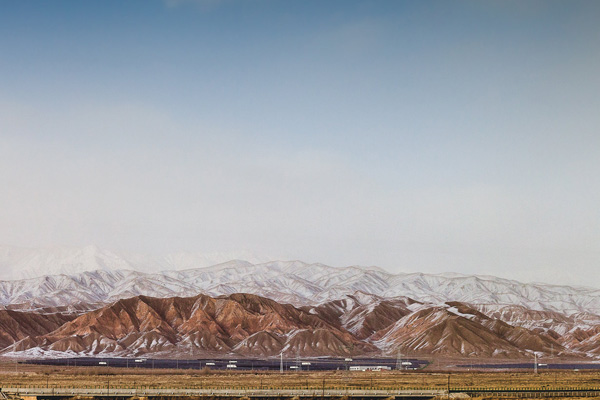 Crossing the Kunlun Mountains - where you may be able to make out the Yuzhu Peak (4,160m), the highest peak in the range - the train drops down the other side to enter the famous Kekexili (Hoh Xil) National Nature Reserve, which stretches out between the Kunlun Mountains and the Tanggula Mountains. The least populated and most isolated region in the northwest of the plateau, this amazing area is home to dozens of species of protected wildlife, including the Tibetan antelopes, wild yaks, Tibetan wild donkeys, and many more.

Tips:
1.) As the altitude rises, the air becomes thinner and thinner. The train started to bump oxygen to the train coaches and the outlets hung on the corridors and in the sleep cabins are available to use when the train approaches to Kunlun Mountain Pass.

2.) Breath smoothly on the train and never get too excited or too worried about the altitude. Drink plenty of water and use the oxygen supply outlets if high altitude sickness appears.

3.) Turn to the medical staff on the train for help if symptoms of the high altitude sickness have not been smoothened.

Enjoying the Expansive Scenery at Tuotuo He River Station

Crossing the vast expanse of the reserve, the train stops at the Tuotuo He River Station, which gives you a chance to alight for a few minutes to get an amazing view of the expansive natural scenery of the plains and the beautiful, wide river that feeds this isolated landscape.

Then it is on to the boundary between Qinghai and Tibet, the Tanggula Mountains. The train stops briefly at the Tanggula Railway Station, the world’s highest railway station at 5,072 meters above sea level. From here, the highest point of the railway line, you cross the pass and head down into Tibet. 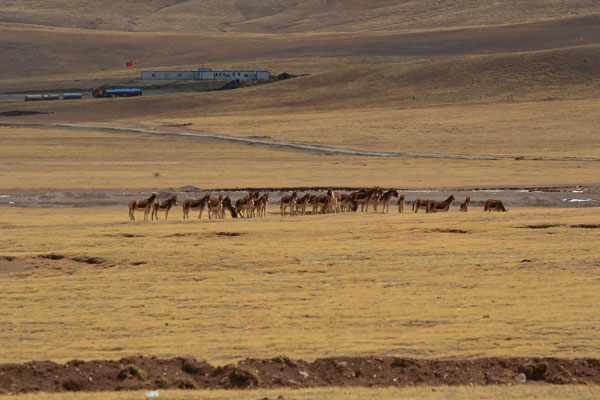 After Tanggula, the train passes alongside the beautiful Tsonag Lake (4,650m), also known as Cona Lake in China, the lakeshore lying just 20 meters from the tracks. One of the highest freshwater lakes in China, the still waters reflects the distant mountains perfectly, as the train steams on to the vast Changtang Prairie and down to Nagqu.

From Nagqu, the train starts its slow descent to Lhasa, as the railway line crosses the vast Changtang Prairie and the yak pastures of the north of the region. From here, daylight is present and the amazing scenery of the plateau region is striking out of the windows of the train.

The vast Changtang Grasslands are a frigid region of Tibet that lies between the Tanggula Mountains and the Nyenchen Tanglha Mountains in northern Tibet. Lying at more than 4,400 meters above sea level, these vast grasslands are the home to thousands of nomadic herders and their families, as well as a huge number of yaks. An immense open prairie that stretches as far as the eye can see in all directions, this is one of the most impressive sights along the route of the railway. 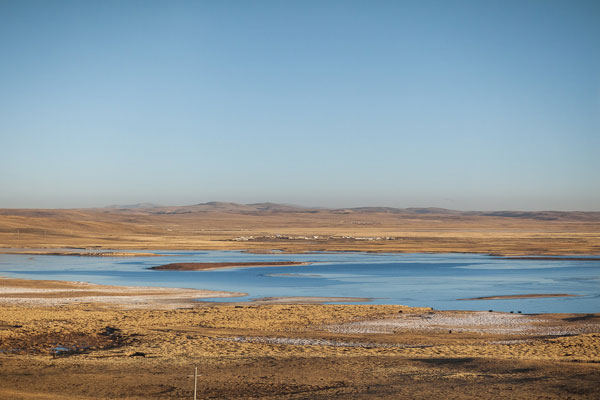 Views on the route heading for Lhasa in Changtang areas

As the train heads south, it passes alongside the famous Nyenchen Tanglha Mountains, a 1,000-kilometer sub-range of the Transhimalaya and the closest high mountains to the city of Lhasa. The highest peak of this huge range in the middle of the plateau is Mount Nyenchen Tanglha, also known as Nyainqêntanglha Feng, which sits at an altitude of 7,162 meters above sea level.

Arriving in Lhasa after Passing by the Namtso Lake

The train travels down alongside the mountain range, with Namtso Lake lying on the other side, just out of sight. As the train travels southwards, it passes by the famous Yangpachen Hot Springs, one of the few hot springs in Tibet that is popular with tourists. It is also the site of one of China’s largest geothermal fields for power production. The geothermal vents have been harnessed to provide an electrical supply to Lhasa. 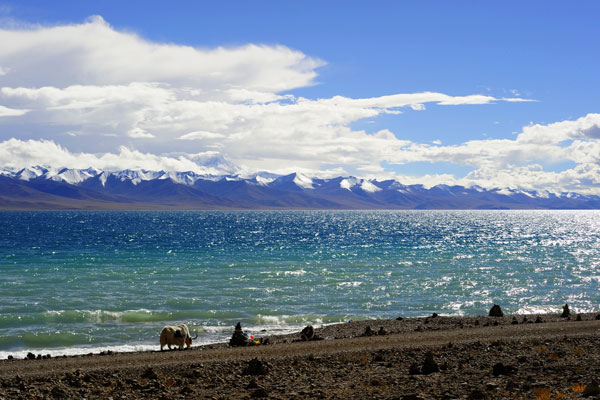 Finally, as the train heads towards your final destination of Lhasa, the tracks cross the Lhasa River over the modern railway bridge. The train finally pulls into the railway station in Lhasa, just a short distance from the city center, and the start of your main tour of Tibet.

Tips:
Lhasa River is one of the life-sources for many of the wildfowl that inhabit this area of the plateau, as well as the migratory birds that fly south in the winter from their northern Tibetan feeding grounds.

While parts of the route from Golmud to Nagqu are traveled at night, this is still the best option for traveling to Lhasa to make the most of the stunning landscapes and scenery of the plateau. Once you pass Nagqu, the rest of the journey is done in daylight, and you have the opportunity to get some amazing views of parts of Tibet that you will not get to visit on a normal tour of the region.

For the best way to view this amazing scenery, there are decent sized windows in the soft sleeper cars or the hard seat carriages, but the best views are always had from the small fold-down seats in the corridors, which have big windows beside them for viewing the scenery, or from the dining car, which also has large windows.

And as long as you have something to eat or drink in front of you, the dining car is the best way to see the landscape as the train steams past on the way to the Tibetan capital and the adventure of a lifetime.