The following are the Qinghai Tibet railway maps. The first Tibet train map is of the new railway starting at Xining and ending in Lhasa. Extensions of the Tibet railway will be made for Nyingchi, and eventually to Bangledash, India, and Nepal. The extension from Lhasa to Shigatse was put into use on August, 2014.

Extensions of the Tibet railway for Shigatse has already opened in 2014, and will be made for Nyingchi, and eventually to Bangledash, India, and Nepal.

The above map shows you the train route from Lhasa to Shigatse.

Railway Maps of Tibet Trains from China to Lhasa

There are nine major railways to Lhasa from other major cities of China and Tibet. You can know more from the following detailed railway map of each line.

The major cities (shown on the map) offers trains to Lhasa, Tibet.

The railway from Xining to Lhasa is the world famous Qinghai-Tibet Railway. It is the quickest and most convenient railway to Lhasa. Since every train to Lhasa stop over at Xining railway station, it is easier to book a Tibet train ticket from Xining instead of Beijing or Shanghai. 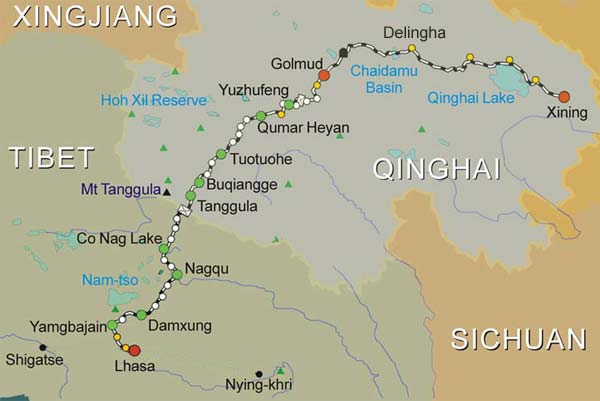 The distance of the railway from Xining to Lhasa is 1960 km.

From the very east to the west, the Shanghai-Lhasa railway is about 4,373 kilometers’ long, through which you are able to cross the mainland China and experience the varied topography.

Chengdu, the major gateway to the west of China, has easy access to Tibet by both flight and train. The scheduled Chengdu-Lhasa train departs every other day from Chengdu Railway Station and arrives at Lhasa on the third day evening.

The total length of the trip is 41 hours and 31 minutes and covers approximately 3,070 km.

The total duration of this trip is 52 hours 41 minutes.

The above map shows you the train route to Tibet from Chongqing.

The railway from Lanzhou to Lhasa is 2,188 km. Besides the train Z917 starts directly from Lanzhou, there are also five trains to Tibet stop over at Lanzhou railway. So you can try to buy Tibet train ticket from Lanzhou instead of the popular Beijing-Lhasa and Shanghai-Lhasa route.

It takes about 23 to 24 hours to take a train from Lanzhou to Lhasa.

The railway from Xi ’an to Lhasa is 2,864 km. There are three trains to Lhasa from other cities stop over at Xi’an railway station. Since there is no direct train departs from Xian to Lhasa, it is more difficult to buy train tickets from Xi’an to Lhasa.

The Railway from Golmud to Lhasa covers the most attractive sightseeing along the Qinghai-Tibet railway. From the map above, you can have a clear mind about what you may see during the train journey to Lhasa. See more Golmud-Lhasa train schedules to pick up your favorite Tibet with the most amazing sceneries en route. 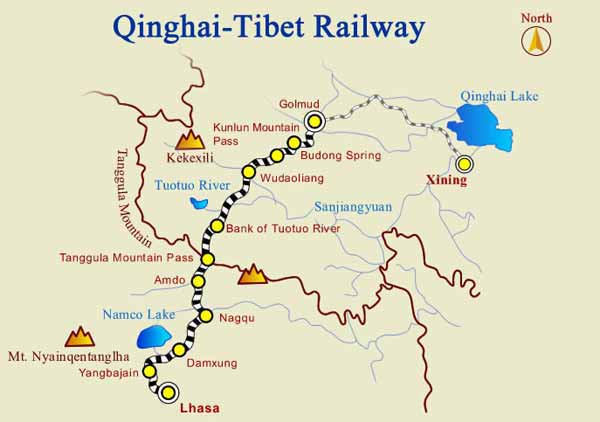 The detailed Map of the Railway from Golmud to Lhasa with the main stations and attractions en route.