Get to Lhasa by Air

Recently, there are dozens of flights to Tibet from major cities in China every day. Nothing is more convenient than taking a direct flight to Tibet from Beijing, Xian, Chongqing or Chengdu, which takes about 2 to 4 hours. And there are also flights from Shanghai, Guangzhou to Lhasa which stopover in Xian or Chongqing. Even in the low season of Tibet tourism, there are still lots of flights flying to Tibet every day. Check the flights to Lhasa as follows.

How to Get to Lhasa by Air?

Tourists can choose from a series of departure cities to take a flight to Lhasa, depending on your travel route.

Beijing to Lhasa by Air

The direct flight service from Beijing to Lhasa has operated from 2006, by Air China. Previously the flight will have a stop in Chengdu, but now one can fly directly from Beijing to Lhasa. The non-stop flight from Beijing to Lhasa takes about four hours and 35 minutes, which is quite short compared to 40 hours of Tibet train ride. The flights use A319 airplane, a larger aircraft to accommodate the huge demand for flights to Tibet.

Shanghai to Lhasa by Air

There is no direct flight from Shanghai to Lhasa. All flights from Shanghai will stop over at Xi’an, Chongqing, or Chengdu. The 3,250-km air route takes 7-8 hours. Passenger planes will take off at 6:45 a.m. from Shanghai and land at Lhasa at 14:35 p.m., with the stopover at Xi'an lasting for one hour and 35 minutes. And the other flight leaves at 14:45 and will stop in Chengdu on the way.

Chengdu to Lhasa by Air

Chongqing to Lhasa by Air

Xi’an to Lhasa by Air

One can fly to Lhasa from Xi’an, the ancient capital city located in the north of central China. The flights leave every day for three times per day, and take about 3 hours and 30 minutes to reach the plateau.

Guangzhou to Lhasa by Air

One can fly to Lhasa from Guangzhou, the capital city of south China's Guangdong Province with a stopover in Chongqing. The air route is operated by the China Southern Airlines which offers return flights every day between the two cities.

Kathmandu to Lhasa by Air

Both China Airlines and Sichuan Airlines operate direct flights from Kathmandu, Nepal to Lhasa, Tibet. It is the only one international flight to Lhasa and takes about 1 hour and a half.

By taking the flight to Lhasa, one can save much time on the way. Even the most prolonged direct flight, which is from Shanghai to Lhasa, will take no more than 8 hours. While the Tibet trains will spend from 22 hours to 50 hours, from the nearest Xining to the farthest Guangzhou city. 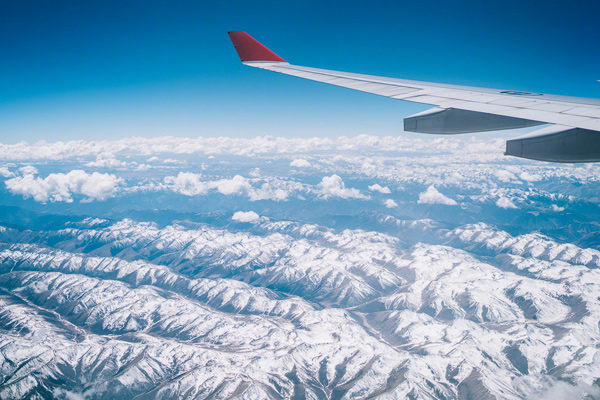 But accordingly, the flight to Tibet will cost higher than the train, in terms of the same departure city. Take Beijing for example, the harder sleeper ticket price for Beijing to Lhasa train is $105, and soft sleeper ticket being $167 (considering no extra fees). While the flight from Beijing to Lhasa will cost from $476 for an economy class ticket.

On the other hand, taking the train to Lhasa can let someone gradually adapt to the high altitude, so as to reduce the chance to suffer from severe altitude sickness. While the flight will let someone rise from low altitude of a few meters to more than 3000 meters in a short time. It will be more challenging to take a flight for those travelling to the Tibet plateau for the first time.

Tips on Getting to Lhasa by Air

1. Try to avoid taking the flight during the peak season of Tibet tour, which is from April to June and September to October. During these periods, the flight price will be much higher and there are many tourists travelling to Tibet.

2. Try to book some connecting flight to Lhasa if you want to save the cost on the price. For some departure cities, there are many connecting flights available except for the direct ones. And some flights will only stop on the way for a short period, like one to two hours, but they will cost much cheaper. E.g. the connecting flight from Beijing to Lhasa will be low to $160.

3. Before getting to Lhasa by air, one need to get the Tibet Travel Permit. In order to make it smoothly to take your flight, you are recommended to contact us ahead of time to help you get the Tibet Travel Permit. You just need to mail your copies of Chinese Visa and passport to us about two weeks before your departure date to Tibet. Then we will help to apply for the permit and then hand it to your hands after it is issued. Your permit will be checked at the airport before you board the flight.

Getting to Lhasa can be realized by different ways, and the flight will be more convenient and timesaving. One can take a flight to Lhasa from major cities in mainland China, including Beijing, Shanghai, Xi’an, Chengdu, Chongqing, Guangzhou etc. Also, international flight from Kathmandu to Lhasa will depart every day. If you still have any other questions about flights to Tibet, just contact us for inquires.