All Airports in Tibet

Tibet is known for its scenic beauty and religious sites. It is also the home for various ethnic groups, which still hold the richness of the culture even today. This region has five main airports that cater to civil airline travel across various regions. In this article, you will get to know the airports in Tibet to get well informed for your planned flight journey to this region.

Known to be part of the list of the world's highest airports, the Lhasa Gonggar Airport is located in Tibet's Shannan's Gonggar County. This airport is elevated at 11,710 feet or 3,570 meters and was constructed in 1965. In 2004, the terminals of this airport were upgraded to cater to new facilities. 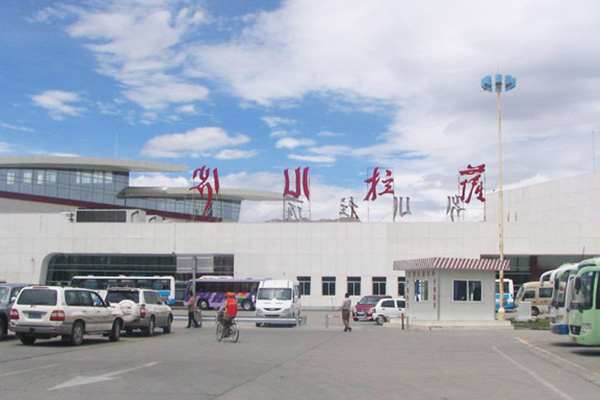 This airport is located in a zone, which was once considered forbidden for air travel. However, after a lot of trial and errors and hard work, this region got its first airport and is not the Tibetan Plateau's biggest connecting domestic hub for different airports and destinations. This airport surpassed all the challenges the came with the location before it could be easily accessed by road and air.

Now it is convenient to transfer between the airport and downtown Lhasa. There is the Lhasa Airport expressway and a tunnel that can take you directly to the airport. And for international tourists who have joined an organized tour with us, you will receive free airport shuttle service by our local guide.

Airlines and destinations that fly to Lhasa Gonggar Airport

Among all the destinations, there are several cities offer daily direct flights to Lhasa Gonggar Airport, including Beijing, Shanghai, Chengdu, Chongqing, Xi’an, Guangzhou, Kunming, Kathmandu. And Chengdu is the city that offers the most frequent flights to Tibet. And some destinations only have seasonal flights for choice, like Hong Kong.

Shigatse Peace Airport is located 41.5 km away from downtown of Shigatse, and is a 4C class military-civilian joint-use regional airport, sitting at an altitude of 3,800 meters. Since now, Shigatse Peace Airport has one terminal building with a floor area of 4,502 square meters, a runway of 5,000 meters long and 45 meters wide. 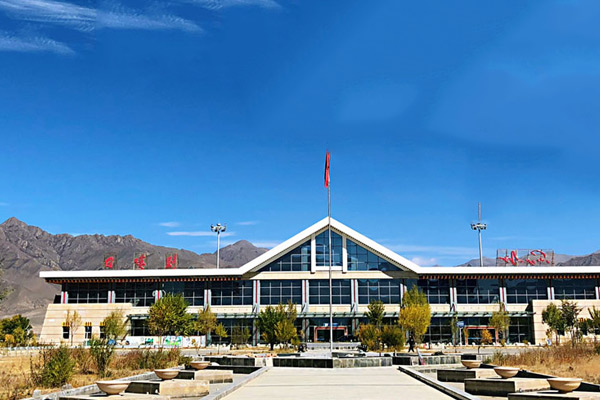 Airport transfer can be realized in two ways. One can take the airport bus which is waiting outside the terminal of the airport, and then head to the downtown. The ticket price for the airport bus is RMB 30 one-way. Besides, one can drive from the airport to the city center, following the newly-opened Shigatse expressway that is specially used for airport shuttle. It takes about 50 minutes by car ride.

Airlines and destinations that fly to Shigatse Peace Airport:

Among the connecting cities, Chengdu, Chongqing, and Xi’an offer direct flights to Shigatse. While other will fly with a stop on the way. For tourists who have limited time yet want to pay a direct visit to the Everest Base Camp, one can fly directly to Shigatse Peace airport. But do pay attention to the high altitude sickness.

Also known as Nyingchi Mainling Airport, it is known to be one of the most challenging airports to reach. This is because this airport is located on a winding valley. Known to be the third largest Tibetan airport, the construction of this airport costed the government around USD $39.18 million or 780 million Yuan. For the investment of this particular airport, even the CAAC or General Administration of Civil Aviation of China contributed a certain amount. 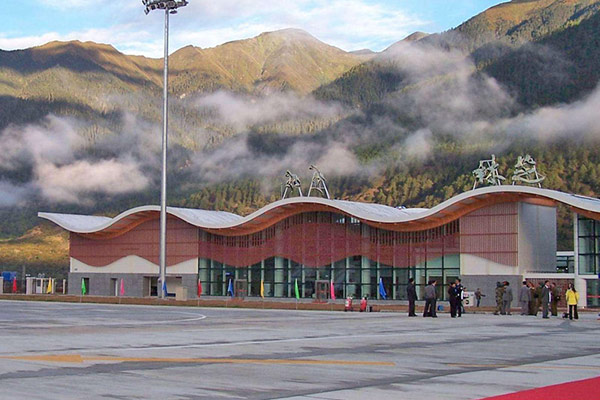 Located above the sea level of 2,949 meters, this airport caters to 120,000 passengers annually. This airport is located in the Yarlung Tsangpo River Valley, which is on the Southeast direction to the Tibet-Qinghai Plateau. It is surrounded by mountains on the ground and when in the air, the planes have the challenge of fog and clouds all year round, which reduces the visibility.

Along with that, another challenge is the fact that in order to reach the airport, Airplanes have to pass through a winding and narrow river valley. This airport per the data derived by meteorologists gives only around 100 days for operation under suitable conditions every year.

Airlines and destinations that fly to Nyingchi Mailing Airport

Among the destinations, Chengdu, Chongqing, Kunming provides non-stop flights to Nyingchi every day. Guangzhou and Shenzhen offer direct flights to Nyingchi. For tourists who worry about the altitude sickness, one can choose to fly to Nyingchi first and then head to tour Lhasa and other regions.

This dual use airport caters to civil as well as military requirements. It is located is Ngari Prefecture's Shiquanhe town which is located in the Tibet Autonomous Region Southwest of China that is located close to the Indian border. This forth-civil airport started operating from 1 July 2010 and is considered the world's fourth highest airport since it is situation 14,022 feet or 4,274 meters above sea level. 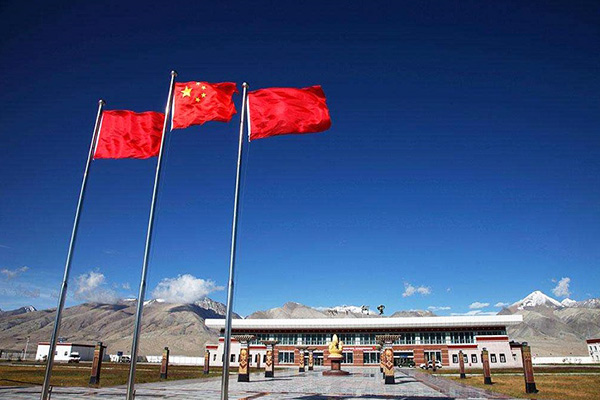 Else known as Gunsa airport, the runway in this airport is 4,500 meters in length. By 2020, the authorities of this airport plan to handle at least 120,000 civilian aircrafts. The construction of the airport started in May 2007 and costed the government USD$ 1.65 million or 1.65 billion Yuan. This airport is also an ideal choice for pilgrims who want to visit the holy and scenic site of the region. This is because there are various religious places for Jains, Bonpa, Buddhists, and Hindus that is located on places like Mount Kailash and Lake Manasarovar.

The destinations and airlines that fly to this region are as follows:

Located the Bangda's Bamda village, the Changdu Bangda Airport AKA Qamdo Bamda Airport once held the record of being the world's highest airport since it was located 14,219 feet or 4,334 m above sea level. This record was then handed over to Daocheng Yading Airport, as it is located at an elevation of 14,472 feet or 4,411 meters officially in 2013 during the month of September. Although this airport lost its world record, it still holds the world record for the longest publicly runway that is used at 3.4 mi or 5.5 km. 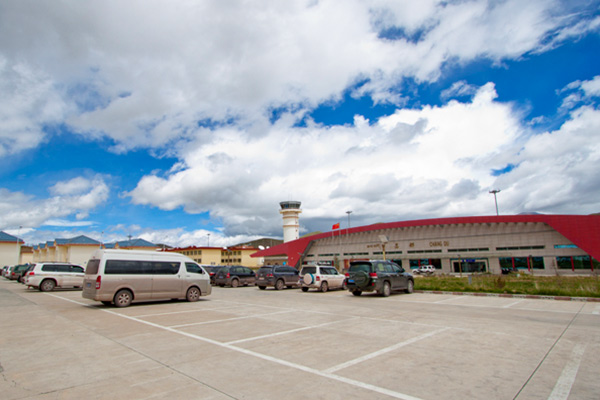 The reason behind such a runway is due to the requirements of airplanes since it is located at such an altitude. Aircrafts that land on this airport require a higher speed of lift off for which they need a long runway. If you are staying at Qamdo, then it will take you around 2.5 hours to reach the airport. The reason behind this is the lack of flat land available to construct an airport. Before passengers leave the plane, they are informed to move slowly since they may experience dizziness or light-headedness due to thin air.

Considering the various geological problems and high altitude weather, the authorities of the airport have started the repair work for the runway first in 2007 and then 2013. The construction work or the second runway, which is said to be 4000 meters in length, is said to be completed by 2018.

Among all airports, Lhasa Gonggar airport is mostly used by tourists for flight journey to Tibet. While you can also fly directly to Nyingchi or Shigatse, based on your itinerary. When planning your trip to Tibet, ensure that you make the booking in advance and reach the relevant airport ahead of time.

You also need to keep in the mind the various challenges you may face while you are travelling to the airport. Therefore, it is recommended to do the relevant research that can easily help you out. If you still have questions about airports in Tibet or flights to Tibet, please feel free to contact us for inquiry.