Kathmandu in Nepal is the only international city in the world that has direct access for flights to Lhasa, the capital of Tibet Autonomous Region. One of the two routes to get to Tibet, the other being through mainland China, the short flights to Lhasa Gonggar International Airport from Kathmandu’s Tribhuvan International Airport are popular with foreign tourists. The Lhasa-Kathmandu flight takes just 90 minutes to cross the Himalayas and the Tibetan Plateau, and are relatively inexpensive, being only a little more than the cost of flights from Beijing or Shanghai.

Kathmandu, the capital of Nepal, offers travelers the opportunity to enter Tibet without going through China, and in terms of visas, means that you do not have to apply for a Chinese Entry Visa before you travel, since your tour operator applies for the Group Tourist Visa on your behalf when you get to Kathmandu.

Considered to be one of the most stunning and spectacular air route in the world, the flights travel low over the Himalayas, although “low” is a fairly relative term, and all flights are actually at an altitude of around 10,000 meters, or around 32,000 feet. The views from the aircraft are amazing, and if the weather is on your side when you fly, you can get a great aerial view of Mount Everest as the plane flies over it on its way to the Tibetan capital.

The average economy ticket for a flight from Kathmandu to Lhasa costs around 400 US dollars in the peak season, although flights can be cheaper depending on the time of year. In less busy months, the flights can be as low as around 200 US dollars each way. Flights leave daily during most of the year, and there can often be up to four flights a day. However, in the winter months, there are often only a few flights per week, and you will need to check the weather in the Himalayas as flights can sometimes be cancelled due to inclement weather conditions across the mountains.

Where is Kathmandu Tribhuvan International Airport

Kathmandu Tribhuvan International Airport lies in the Kathmandu Valley, around six kilometers from the city center, and is the only international airport in Nepal. The airport has been running since 1949, and is easily accessed from the city by shuttle buses, regular local buses, local taxis, and pre-booked hotel taxis, and prices can vary depending on the mode of transport used. Most foreign tourists tend to use the pre-booked taxis, as they are a little safer than the local taxis, and have a pre-set fare, while the local taxis can charge heavily if the fare is not agreed to with the driver in advance. The cheapest transport method to the airport is the local bus, though it does not stop at the terminals, rather dropping passengers at the entrance gate to the airport. 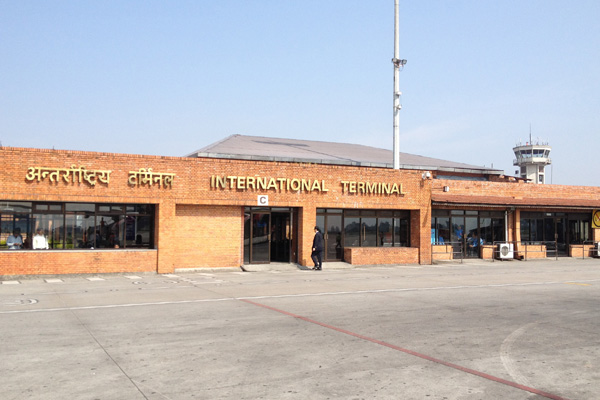 How to Find Cheap Flight from Kathmandu to Lhassa

Unfortunately, there are very few options for making the cost of the flights from Kathmandu to Lhasa any cheaper than those advertized online. Some internet sites can offer cheaper flights than others, and it pays to search around for the best online price for your flight, and return flights are often cheaper than two single flights when arranged through a travel agent online. The many budget airlines available around the world do not operate flights to Lhasa, so the only options are to find the cheapest flight available from the carriers that operate the route.

One way to reduce the cost of your flight to Lhasa is to visit Tibet during the off-peak months, as there are sometimes additional discounts that can be used or special offers and promotion codes that you can avail of to make the flights less costly. Booking direct with the airline after you have found the flight price is not always the cheapest option either, as some travel agencies have special discounts that you cannot get when booking direct.

It should be noted, however, that if you are traveling as part of a join-in group tour that starts in Lhasa, with all members of the party traveling from Kathmandu as a group on the Group Tourist Visa, you will not be able to book your own flight as all party members must enter and exit Tibet at the same time and through the same port of entry or exit.

Travel Documents for Taking the Flight from Kathmandu to Lhasa

The first thing to know about traveling to Tibet from Kathmandu is that you will not need to waste time getting a Chinese Entry Visa. All travelers to Tibet from Nepal are required to have a Group Tourist Visa, issued by the Embassy of the People’s Republic of China in Kathmandu. This replaces the Chinese Entry Visa, but cannot be applied for individually. All applications for the Group Tourist Visa must be made through a registered Tibet tour operator. The visa does not actually require you to be in a group, and can be obtained for a solo traveler, although these rules are often subject to change with no notice, so it is important to liaise with your tour operator on the rules that are currently in force at the time of travel. 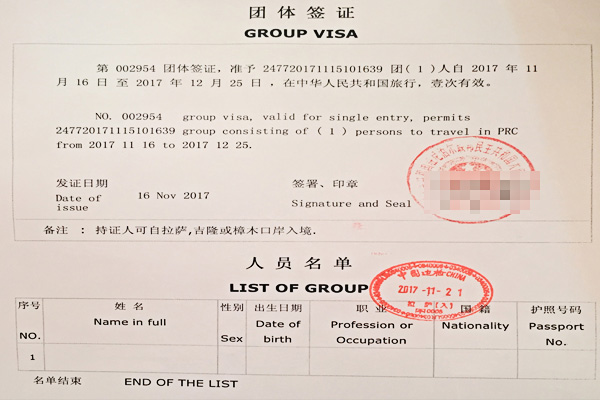 In order to obtain the visa, you will need to be in Kathmandu at least five working days before your expected date of travel, and have provided the tour operator with your passport copy in order to allow them to apply for your Tibet Travel Visa beforehand. Once you arrive, the tour operator’s agent will meet you at your hotel and obtain your passport, photos, and fee, and will make the application for the visa on your behalf using the Tibet Travel Permit, letter of invitation, and itinerary that they have already obtained. Processing takes three working days, and an application submitted on Monday morning will be available for collection before lunch on Wednesday.

The Tibet Travel Permit, as mentioned previously, is applied for by the tour operator once you have booked your pre-arranged tour with them, and takes around 15-20 days to process and be received by the tour operator. It is then forwarded to the agent in Nepal, who will use it to apply for the visa, and then give it to you for your trip into Tibet. The Tibet Travel Permit is needed to get into Tibet, and to travel around in the area of Lhasa. Without this, you cannot even board the flight to Lhasa, so it is important to keep it safe and on your person at all times. It will also be used at the various checkpoints around Tibet and at your hotels for checking in. 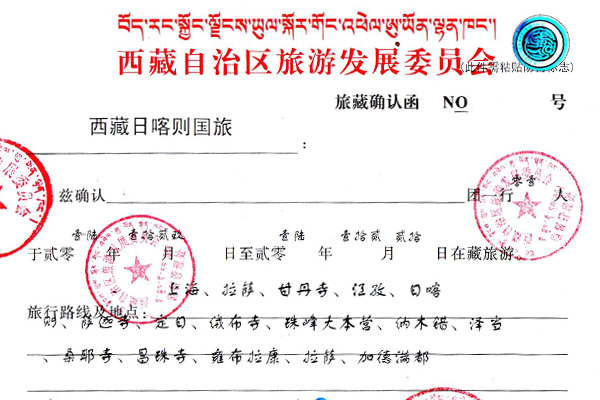 While you will be flying across the border into Tibet, landing at Lhasa Gonggar International Airport, you will still need to have the Frontier Pass that is required for travelers entering the border areas of Tibet with Nepal or India. You will also need the Alien’s Travel Permit for travel to areas outside Lhasa, and the Military Permit for travel to military sensitive areas that have restricted access, such as Mount Everest, which the plane flies over en route to Lhasa.

All of these documents are obtained by your tour operator or agent before you leave Kathmandu, and the permits are included in the cost of most tours to Tibet. Applications can be done easily and quickly, and usually only require your passport and Tibet Travel Permit to make the applications.

Alternative Ways to Get to Tibet from Kathmandu

There is another way to get to Tibet from Kathmandu that only recently reopened, allowing foreign tourists to once again take the overland route across the Sino-Nepal border. Since the earthquake in 2015 destroyed the crossing and parts of the Friendship Bridge at Zhangmu, travel across the border was closed to foreign tourists for more than 2 years. In August 2017, the border was reopened using a different crossing point, at Gyirong Port in Shigatse Prefecture. The crossing point lies on the Resuo Bridge across the Trishuli River between Rasuwagadhi Fort in Nepal and Gyirong Port in Tibet.

The overland tours from Kathmandu to Lhasa run the same as the normal Tibet tours, except that you start at the Sino-Nepal border, and follow the route backwards, finishing in Lhasa for the last few days, taking in the amazing sights and attractions of the Tibetan capital.