The trains to Tibet are one of a kind, since they have to travel along the highest railway in the world. In an environment where the oxygen content is the lowest on the planet, thousands of passengers every year take this high-altitude express from China to Lhasa, crossing the Qinghai-Tibet Plateau at altitudes of more than 4,000 meters.

Built in Pennsylvania by the American company, GE, the train engines have been specially designed and adapted to run well on the high-altitude of the plateau. Moreover, the carriages, manufactured by Canada's Bombardier Inc, which makes small planes, are specially designed to carry passengers in an oxygen-deficient atmosphere, where the average oxygen content is lower than anywhere else in the world. In order to do this, the train cars have to be pressurized, to ensure that all of the passengers do not finish their journey with severe cases of altitude sickness. 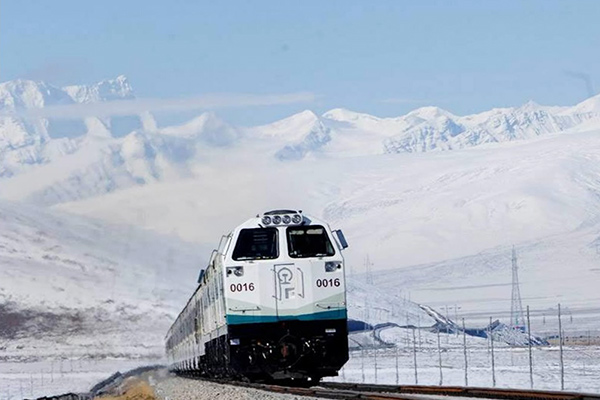 These specially designed cars, pressurized like aircraft, with filtered, sealed windows to protect passengers from ultraviolet rays and oxygen supplies to prevent passengers from getting altitude sickness and help them with the thin air.

Oxygen delivery systems on the train

There are two kinds of oxygen supply system on Tibet trains to help you overcome the lack of oxygen. One is the main system, which employs the air-control system to spread oxygen to the train to keep the oxygen content on the train to a certain standard. Another is the oxygen port equipped for each passenger to use when they feel that they lack oxygen. 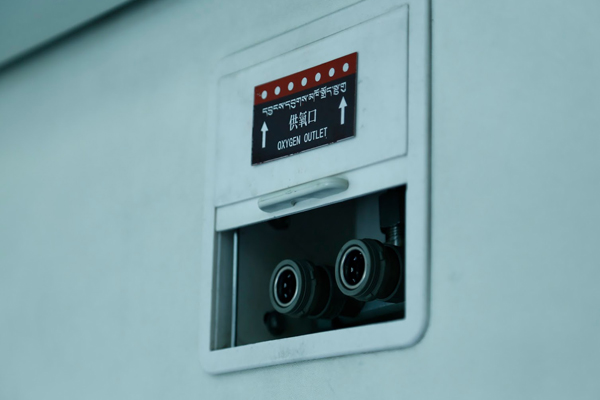 The oxygen control system does not work for the entire trip to Tibet. From all of the stations in China, the train runs as a normal train, and the air that you breathe is the same as the air outside. However, after the train passes the station at Golmud, at 2,809 meters above sea level, the oxygen delivery system is switched on, delivering fresh and refreshing oxygen into the air of the train. And when the oxygen supply systems are working, smoking is forbidden in all the carriages.

The ‘dispersion-mode’ oxygen supply system is set into the train walls above the windows of every carriage. It spreads oxygen made by the oxygen generator to the train’s air through the air-conditioning system and keeps the oxygen content of the air about 23%.

The other system is “distribution-mode” oxygen supply system which can be directly used by passengers through an independent port. You can easily find them below each seat in the Hard Seats Carriages, and near every berth in each cabin of Soft Sleeper Carriage and on the train wall in Hard Sleeper Carriage. 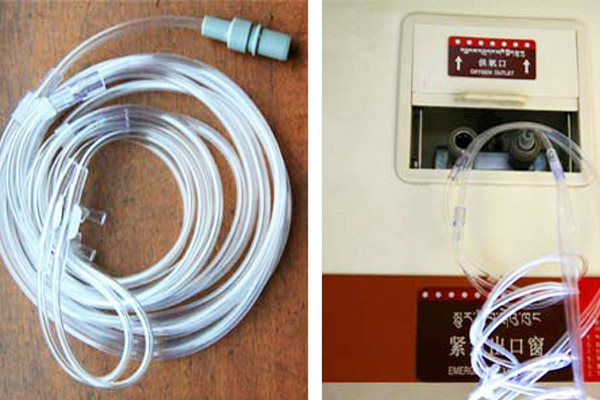 The train conductors will distribute the disposable pipes to passenger usually before arriving in Golmud. If not, you can ask for it when the high altitude sickness (such as headache, breathing difficulties, etc) occurs. Connect the disposable pipe to the oxygen outlet first; put the other end of the pipe into your nostrils then and you can breathe the oxygen freely. There are also oxygen supply tubes and masks in each cabin in case of emergencies. For the benefit of all the passengers, the individual oxygen outlets are almost everywhere in the Tibet train.

In the train corridor, oxygen supply outlets are on the train wall. In the cabins, they near the beds and can be used while lying on the bed. You can easily locate these wall outlets as they have dark red covers which have “OXYGEN OUTLET” written on them. If you are traveling in normal seats, the oxygen supply connectors are located beneath the seats. They are not red and there is no “Oxygen Outlet” text on them, but they can easily be located.

How the altitude changes along the way?

When traveling from China to Tibet, you are going from an altitude just a little above sea level to an elevation of 3,490 meters at Lhasa. However, while this might not seem like a huge increase, the train passes over the highest railway pass in the world, the Tanggula Pass, at an elevation of 5,072 meters. At this elevation, the symptoms of altitude sickness can easily start to show. 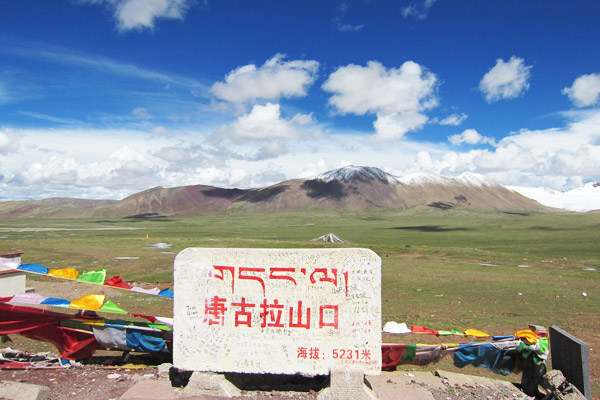 From Xining, you will start at an elevation of 2,275 meters, which increases sharply once the train passes Golmud, at 2,809 meters. From Golmud, the journey to the Kunlun Mountain Pass, at 4,800 meters, takes just a few hours, which is an exceedingly fast ascent in terms of high altitudes. Without the dispersion oxygen system, many passengers would feel the effects of altitude sickness by the time the train reached the pass.

For some time, the train then travels on a level track, as it continues its journey to the next high point. The highest point on the Tibet line, Tanggula Pass sits at 5,072 meters, and is the highest point that the train reaches on its epic journey to Lhasa. After Tanggula, the train descends gradually as it crosses the Hoh Xil, or Kekexili area of Yushu Prefecture, at an average elevation of around 4,600 meters. Over the next few hours, the altitude drops by over 1,000 meters, before reaching Lhasa, at an elevation of 3,490 meters.

Does it mean I will not experience the altitude sickness with the help of oxygen supply system?

Despite being pumped full of oxygen for the trip over the plateau, there is no guarantee that you will not experience some mild symptoms of altitude sickness. Altitude sickness can occur when you travel to a high altitude too quickly, and your breathing becomes difficult because you are not able to take in as much oxygen.

Altitude sickness, also called acute mountain sickness (AMS), can become a medical emergency if ignored, and age, sex or physical fitness have no bearing on your likelihood of getting altitude sickness. Moreover, just because you have not had it before doesn't mean you will not develop it on another trip.

Every train to Tibet is equipped with one doctor and one nurse. Therefore, you do not need to worry too much about the high altitude. If you get serious altitude sickness or some other physical problem, call the doctor or ask the train staff for help immediately. Serious altitude sickness can be life-threatening, and you will need to be moved to a lower elevation immediately.