Although the very beginning of Tibet train lies in Xining, for the tourists you don’t necessarily have to fly to Xining to begin your Tibet train journey. The massive rail system across China makes it very easy for you to hop on a train from any major provincial city to Tibet. Currently, first-timers to China can board direct trains to Lhasa from Beijing, Shanghai, Guangzhou, Chengdu, Chongqing, Lanzhou and Xining. You may also choose the connecting trains to Tibet from Xi’an, Golumd, etc. Check following trains to Tibet with real time train schedule, ticket price and useful train journey map.

Here you will find numerous maps that depict the train route to Lhasa. The Qinghai-Tibet train route starts at Xining and ends in Lhasa. This route is also known as the "Qingzang Railway" or “Qinghai-Tibet railway”.

Currently, seven cities in mainland China offer direct trains to Lhasa. They are Beijing, Shanghai, Guangzhou, Chengdu, Chongqing, Xining and Lanzhou. But it does not indicate that you can board a train to Tibet only in these cities. Trains to Tibet pass through many important cities in China, like Nanjing, Zhengzhou, Xian, Changsha and Taiyuan. Whichever city you board, all trains pass through the Qinghai-Tibet Railway, from Xining to Lhasa. 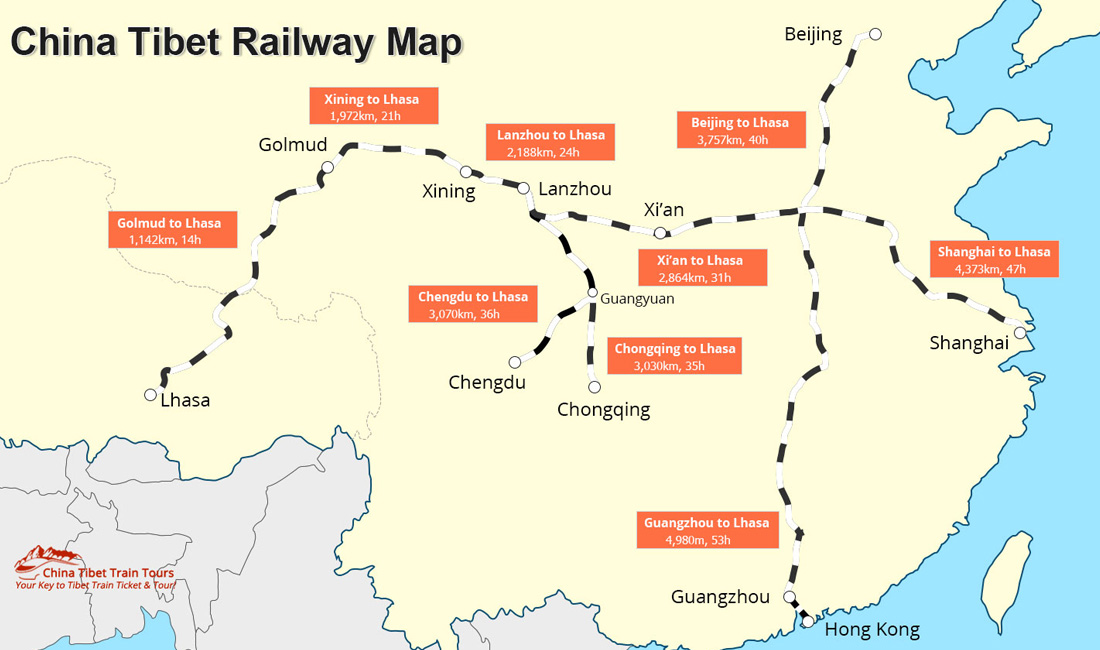 Just tell us your travel plan, including your preferred travel date, train route, your group size and the things you want to experience during your Tibet train tour, our professional China Tibet train tour advisor will offer you useful information according to your needs within 24 hours.

1Which is better, train in or out of Tibet?

How to choose the Tibet railway route? To take a train to Tibet or out of Tibet? This may be a question for some travelers while planning their first Tibet Tour by train.

Most tourists choose to take a train to Tibet, for it is a good way to adapt to the high altitude during the train journey from lower places to the Tibet plateau. The Tibet train journey from mainland China takes over 24 hours, and the longest journey from Guangzhou to Lhasa even takes about 50 hours. You can have enough time to get used to the raising of the altitude gradually. And the featured oxygen supply system onboard makes it more comfortable on the train.

That’s why most travelers think taking a train to Tibet is the best choice. However, you can think about taking a train from Tibet if you meet the following situation:

Can’t get a train ticket to Tibet!
It may happen during the peak season, usually from July to August, and the first week of October. Not only international tourists, but also many domestic tourists choose to travel to Tibet in summer holiday, it is hard to get a Tibet train ticket from Beijing, as well as some other popular gateway cities for China Tour, like Shanghai and Chengdu. For those who really want to experience a Tibet train journey and can’t get a ticket to Tibet, it is suggested to take a flight to Tibet and take the Lhasa express train from Lhasa after your Tibet tour.

2Which is the best city to take a train to Tibet?

There is no doubt that Xining is the best city to take a train to Tibet. Since all the Tibet train passes through this city as the starting point of the Qinghai-Tibet railway, it is easier to get a Tibet train ticket in Xining, especially during the peak season. But for its location, in the far northwest of mainland China, it is not convenient for international tourists arrive in Xining from their home countries. So it is suggested to get to Beijing, Shanghai, Guangzhou or some other major ports in mainland China and then transfer to Xining to take a train to Tibet.

If you travel to Tibet in low season during winter, it is alright to take a train to Lhasa from Beijing, Shanghai or other cities directly, for there are fewer travelers so that you can easily get a train tickets from these popular gateway cities.

3Is there any train route between Lhasa and Kathmandu?

Recently, there is NO train route between Lhasa and Kathmandu. The Tibet-Nepal railway is still under construction. The first section from Lhasa to Shigatse was finished and opened to the public in 2014. There are three trains running between Lhasa and Shigatse every day. Once the whole Tibet-Nepal railway is opened, both the locals and tourists can travel Tibet and Nepal by train.

Welcome to China Tibet Train. We offer China Tibet train tickets booking service and China tibet tour service. Please tell us your travel plan by completing the form below and we will get back to you via email within 24 hours.