Traveling overland to Tibet is one of the most amazing adventures on the planet. Not only is it the best way to explore the depth of the plateau’s rich culture and stunning landscapes, but with five different routes into Tibet from mainland China or Nepal, you are spoilt for choice in which route to use. You can either travel from Kathmandu in Nepal, crossing the border into China, or take one of the highways from Xinjiang, Sichuan, Qinghai, or Yunnan to get to Tibet from mainland China.

Overland to Lhasa from Kathmandu

The most popular route for people traveling overland to Lhasa is from Kathmandu in Nepal, a journey of 1,155 kilometers (718 miles), taking around 7-8 days to complete. With altitudes ranging from 1500 meters to as high as more than 5,000 meters above sea level, you will travel on amazing highways and gravel and dirt mountain roads, cross vast deserts and prairies, and cross mountain passes that provide excellent views of the mighty Himalayas in all their glory.

Starting in the exotic Nepali capital of Kathmandu, you will travel by car or local bus to the border with China at Rasuwa Gadhi and cross over into Tibet to Gyirong Port, the new border checkpoint into China from Nepal. After meeting your tour guide and driver, you will then take the short trip to Gyirong Town, through the beautiful Gyirong Valley, where you will stop for acclimatization for the day. Then it is on to Saga, the last decent town for those heading north to Mount Kailash and Lake Manasarovar.

After leaving Saga, you will head east along the G318 Friendship Highway to Lhatse and Shigatse. For most travelers, they will spend one night at the Everest Base Camp from Tingri before they arrive in Shigatse. Different from the view in the base camp in Nepal, the view of the peak of Mount Everest could be more amazing from the base camp in Tibetan side.

>> Join in Our Popular Kathmandu to Lhasa Overland Tour via Everest Base Camp.

Then you will keep going to Shigatse, where you will get to visit the Tashilhunpo Monastery, the seat of the Panchen Lama, Tibet’s second highest Buddhist incarnation.

Then it is on to Gyantse, a small town with a large monastery. Inside the Pelkor Chode Monastery lies the largest stupa in Tibet, Standing 32 meters high and containing 108 chapels with small statues and murals depicting the life of Buddha.

After Gyantse, you will continue on towards Lhasa, stopping by the stunning Lake Yamdrok along the way to get a great view of the beautiful lake that is said to be the life-blood of Tibet.

Once in Lhasa, you can spend a few days touring the city and seeing the sights, including the sacred Jokhang Temple, the most revered Buddhist temple in Tibet, the Potala Palace, now the winter palace of the Dalai Lama, and the amazing Gelug monasteries that are dotted around the city.

Best Time to Travel Overland to Lhasa from Kathmandu

The best time to take a Kathmandu to Lhasa Overland tour is from April to October, when the weather is at its best for traveling. In the spring and autumn, the weather is clear and crisp, with blue skies and little rain.

However, even though summer is the monsoon period in Tibet, with little rain and most of it falling in the evenings, there is no problem taking the overland tour from June to August either.

Overland to Lhasa from Chengdu

One of the most popular routes to Tibet from mainland China, the Chengdu to Lhasa overland route is around 2,049 kilometers (1,273 miles) across some of the most beautiful terrain on the plateau. You can also experience the amazing ethnic cultures that reside in the different areas of the plateau along the routes to Lhasa, the great Tibetan capital.

This route is actually rated as one of the most dangerous roads in the world, and it is not for the faint hearted. International travelers will require a driver and guide to take this route into Tibet, and the best time to take a Chengdu to Lhasa overland tour is in the spring and autumn, from April to May and September to October, when the weather is at its best for driving.

Starting at the Sichuan city of Chengdu, the Chengdu to Lhasa overland route takes you along one of two routes, either north along the G317 National Road through Nagqu to drop down to Lhasa, or along the southern route, which runs through Nyingchi along the actual G318 Sichuan Tibet Highway. On average, the trip can take around 13-15 days to complete, visiting many of the great sights along the way.

The main route from Chengdu to Lhasa is the southern route, which starts from Chengdu and heads out through Ya’an and Kangding to the famous bridge at Xinduqiao, the most popular place in Sichuan for photographers. Then it is on to Litang, the site of the famous Litang Grasslands, which stretch for miles on the southern slopes of the plateau. After passing through Markam, you enter the Tibet Autonomous Region, and head west through the mountain areas for Bangda, Basu, and Bome, before reaching the city of Nyingchi. One of the lowest cities in Tibet, Nyingchi is classes as the Swiss Alps of Tibet, and is a stunning area of beautiful natural alpine landscapes that are absolutely breathtaking.

As you roll out of Nyingchi along the new expressway, you will pass by some of the stunning mountains that lie on the boundary of Nyingchi and Lhoka, close to the famous Yarlung Tsangpo Grand Canyon. The route of the road follows the Yarlung Tsangpo River Valley for many miles, eventually turning to pass along the northern foothills of the lower Nyenchen Tanglha Mountains before reaching the Tibetan capital of Lhasa.

Overland to Lhasa from Kunming via Lijiang and Shangri-la 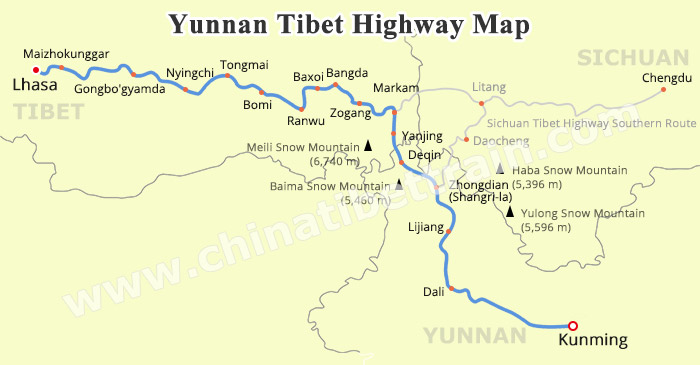 If you are coming from Yunnan Province, the route to Lhasa starts in Kunming, the capital of the province, and is a distance of around 2,227 kilometers (1,384 miles). A Yunnan to Tibet overland tour generally takes around 2 weeks to complete, traveling through some of the most outstanding mountain landscapes in southwest China.

Departing from Kunming, the Yunnan Tibet highway route follows the local roads as far as Dali, where it starts the G214 National Road, part of the Yunnan Tibet Highway to Lhasa. From there, the route heads north through Zhongdian, now known as Shangri-La after the famous novel Lost Horizons, and on up to Deqen ad Yanjing, before entering Tibet just before you reach Markam, on the G318. From Markam, the route to Lhasa follows the road known as the G318 Sichuan Tibet Highway, traveling the rest of the way long the same route through Ranwu, Bome, and Nyingchi to reach the Tibetan capital.

Best Time to Travel Overland to Lhasa from Yunnan

The route is best traveled in the spring and autumn months, as the weather in summer can leave the roads wet and dangerous, as the area is prone to landslides in the monsoon season.

In winter, after the end of November, much of the route from Yunnan to Markam is under heavy snow, especially in the higher mountain areas and passes, which makes it impossible to drive safely until April comes around again.

Overland to Lhasa from Kashgar 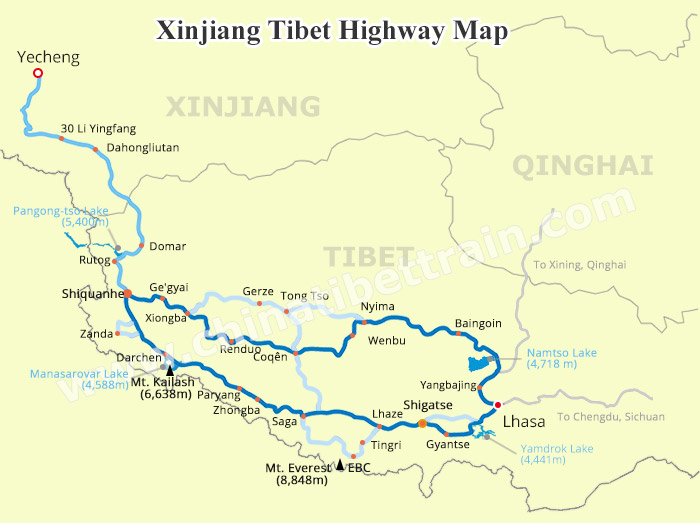 The overland route from Kashgar in the Xinjiang Uyghur Autonomous Prefecture to the north of Tibet is deemed to be one of the most remote roads in the world, not to mention the highest. As a journey that covers a vast distance of 2,844 kilometers (1,767 miles), this epic Xinjiang to Lhasa overland tour can take from 18 to 21 days, depending on your route and stops.

The road from Kashgar heads south to the town of Shiquanhe, the seat of the Ngari Prefecture in Tibet. From there, you can take the northern route through Coqen and Baingoin, heading past Lake Namtso and Yangpachen and then dropping down to Lhasa.

Alternatively, you can continue south to Saga, passing the stunning Lake Manasarovar and the sacred Mount Kailash long the way. One of the reasons the trip can take longer is that some people like to stop at Mount Kailash and take the three-day kora trek around the mountain, one of the best treks in Tibet.

From Saga, the road follows the Friendship Highway through Shigatse and Gyantse to Lhasa, passing the beautiful Lake Yamdrok along the way.

Best Time to Take Overland to Lhasa from Xinjiang

This is a trip that you do not want to do in the winter months, as the cold in the north of Tibet can freeze the fuel in your vehicle and leave you stranded. You will also cross the vast desert of northern Ngari, which sees low temperatures of around -30°C in the winter. April to October is the best time, when the weather is warmer, and with little rain, even in the monsoon period.

Overland to Lhasa from Xining 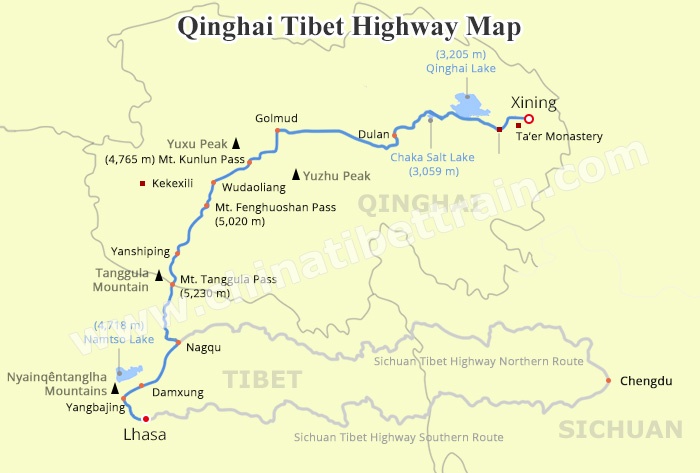 Previously the only way to get into Tibet from mainland China, the Qinghai Tibet Highway - which runs for 1,916 kilometers (1,190 miles) from Qinghai Province to the Tibetan capital - is the shortest of the routes from mainland China to Lhasa.

Starting in Xining, the capital of Qinghai Province, the road runs west past the Qinghai Lake, the largest lake in China, and the Chaka Salt Lake, famous for its vast salt deposits that are exported across the country.

After passing through Dulan, the road heads to Golmud, on the edge of the higher part of the Tibetan plateau, and climbs almost 2,000 meters to the Mount Kunlun Pass, at 4,765 meters above sea level. From there, after crossing the Kunlun Mountains through the Mount Fenghuoshan Pass at 5,020 meters, the route continues through the vast Kekexili National Nature Reserve, a huge prairie on the edge of the plateau that sites between the Kunlun and Tanggula Mountains.

The road crosses the high Tanggula Mountains into Tibet Autonomous Region across the famous Tanggula Pass, which sits at an elevation of 5,230 meters and is the world’s highest road pass. Once across the Tanggula Mountains, the route heads south, crossing the vast Changtang Grasslands of Nagqu and winding past the Nyenchen Tanglha Mountains, through Damxung County, the location of the sacred Lake Namtso, and ending finally in Lhasa.

Best Time to Take Overland to Lhasa from Xining

The best time to take this overland journey from Xining to Tibet is from May to October, as the area around northern Tibet, especially in Nagqu, is frozen over in the winter months, and some of the passes will not be clear of snow until at least May.

>> Check the Detailed Itinerary about our 11 Days Xining to Lhasa Overland Tour.

Five major highways lead overland to Tibet, and whether you take the road from Kathmandu, or one of the four roads from Kashgar, Chengdu, Xining, or Kunming, this is one of the most epic adventures you could possibly imagine.

With almost all of the routes crossing the vast mountain ranges of the Himalayas and Transhimalaya, you are guaranteed to have some of the world’s best views of the high Tibetan mountains, stunning natural lakes, and get the chance to see some of the amazing species of animals that still run wild across the plains and prairies of Tibet.