You are browsing the site archives by month.
31Mar 2014

Holy Mountain and Lake in Ngari

Located in west Tibet, Ngari Prefecture borders India, Nepal and Kashmir. As world’s least populous prefecture, it covers 300,000 square kilometers at an average of 4,500 meters above sea- level. Intersection for Gangdise Mountains and Karakoran Mountains, Ngari is also the birthplace of a couple of major domestic and international rivers. It is therefore dubbed “ancestry of all rivers” and “origin of all springs” Rolling mountain peaks and meandering rivers overlook myriads of lakes unfold themselves through boundless prairie.

Among the numerous majestic mountains in Ngari, Mt. Kailash in Purang County is the best known holy mountain to the world as recognized as the center of this planet in Tibetan Buddhism, Hinduism and Bonism (the original religion in Tibet). The highest peak in Gangdise Mountain range, Mt. Kailash zigzags into a pyramid shape, averaging 6,656 meters above sea-level. In Tibetan language, Kailash means “mountain of gods and goddesses”.

Twenty kilometers onwards from Mt. Kangrinpoche lies another engaging spot-Lake Manassarovar. A freshwater lake averages 4,588 meters above sea-level with 412 square kilometers of coverage and 70 meters of depth. It is world’s highest fresh water lake. When the day clears up, the water appears transparently blue with ripples on the lake surface and reflected images of the clouds and the sky.

The Yamdroktso Lake in southwest China’s Tibet Autonomous Region has recently been listed into the State’s pilot project on ecological environmental protection of 100 good lakes.

The Yamdroktso Lake is the second holy lake in Tibet to be listed in the project after the Namtso Lake. And related preliminary work was conducted last year.

Boasting beautiful and charming natural landscapes, the lakes in Tibet including Yamdroktso Lake attract a great number of tourists at home and abroad every year.

In order to resolve the hidden danger of household garbage brought by tourism development, the environmental department of Tibet has taken measures to strengthen the management and ecotourism tourism publicity at key scenic spots. 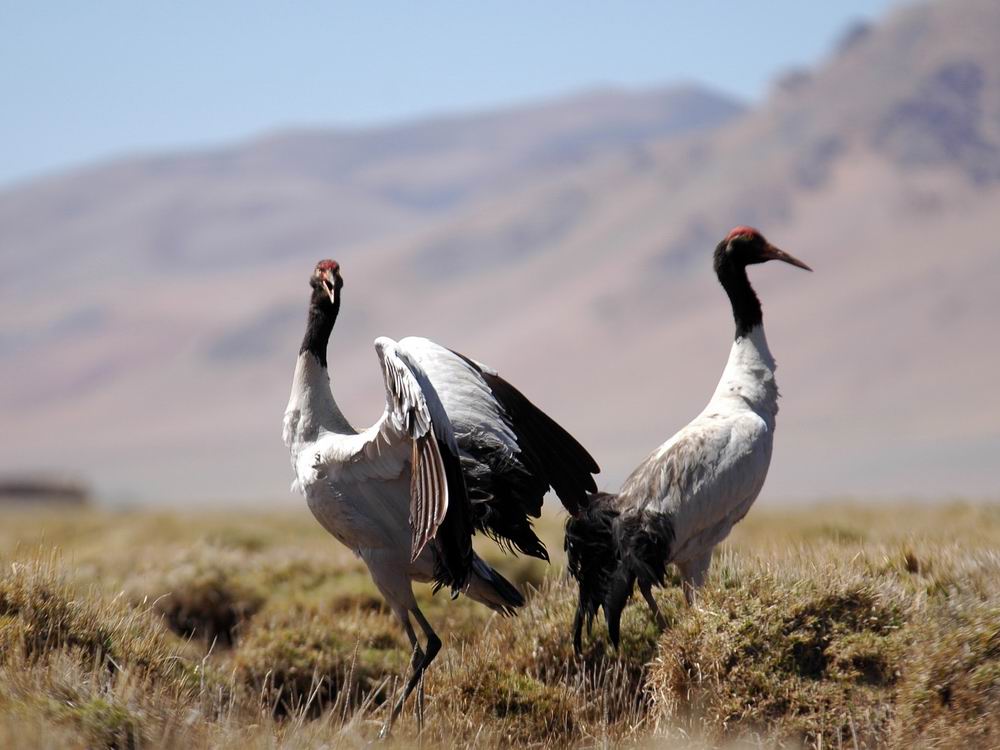 According to the Forest Department of Tibet, there appears a recovery growth in the number of protected animals in the region.

At present, 45 out of 141 kinds of protected animals are under national first class protection level.

The picture shows the villagers take part in the games at a sports meeting held in Gachang Village, Lhunzhub County of Lhasa. It is a sports meeting full of rural fun, which includes traditional Tibetan tug-of-war, race with sandbag as well as other games.

More than one hundred mountaineering professionals have taken part in the training program which is aimed at promoting mountain climbing in Tibet internationally.

Experts from Tibet Foreign Affairs Office and Tibet Frontier Corps give lectures on etiquette of international and cross-cultural exchanges.

Jan. 15 of the Tibetan calendar, which falls on Mar. 16, 2014, is the “starting ploughing festival”. The production modes are advanced with the times with traditions and custom of Tibetan styled farming culture inherited.

In the early morning of the day, villagers wearing their holiday costumes and best jewelries of Chuphu Village, Chushur County in Lhasa, gathered in the most fertile farmland of the village to start the year’s ploughing,.

On 10:45 of the day, a sacred white stone considered as the “embodiment of dragon’s daughter” was placed in the farmland as part of the sacrificial ritual. Zanba (roasted highland barley flour) and highland barley wine were offered to the stone, with aromatic plants burnt and sacred songs being sung. Tibetan farmers hoped the holy stone could protect crops from hailstones, worms and birds, and bring good weather and harvest in the year.

Mani stone piles can be seen everywhere in Tibet in mountain-passes and on river banks.

Mani stone refers to the stones engraved with the six-syllable prayer word “om mani padme hum”. Tibetans often describe one’s loyal heart as firm as the invariant carvings on stones, which can be traced in the heroic stories of King Gesar where his foot-print and his horse’s foot-print left in places of historical interest are revered by Tibetans.

Mani stones piles can be used as road signs, sacrifice to holy spirits, and tokens of worship and prayer, among which the latter two meanings are still popular in Tibet and Tibetan inhabited areas.

To further protect wetland resources and improve its protection system, the Mansarowar wetland and Midikha wetland have applied to be promoted as national natural reserves from local natural reserves, according to Forestry Department of the Tibet Autonomous Region.

It is the first time to make areas where wild yaks and Tibetan antelopes breed and calve into the key protection areas.

At present, Tibet has established 47 natural reserves, 9 of which are under state–level protection, 14 are under autonomous region protection and 24 are at city and county levels. The protection areas in Tibet have reached 413,700 kilometers, accounting for 33.9 percent of the total land area and ranking the first in China.

Tibetan Buddhist monks and believers attend the Butter Sculpture Festival in Jampaling Monastery, Chamdo, east Tibet, on March 16. The festival is hailed on Jan. 15th of the Tibetan calendar every year, to commemorate Sakyamuni’s triumph over other Buddhism sects on sutra debating. Jampaling Monastery is the biggest Monastery of Gelug sect of the Tibetan Buddhism in eastern Tibet. Butter sculptures are colored monuments built of yak butter mixed with fat and wax commemorating various traditional stories and fables.

Inside the Jampaling Monastery in Chamdo Town of Chamdo Prefecture of Tibet Autonomous Region, monks are enjoying sutra debates over Buddhist scriptures on March 13.

The Jampaling Monastery is under the administration of the Gelug Sect of the Tibetan Buddhism. The monastery was founded during the Ming Dynasty (1368－1644 A.D.) after founder Tsongkapa’s religious reform in Tibet.

The sutra debate is a special religious practice for monks to better understand the Buddhist scriptures, which usually takes place in a shady clearing on the courtyard inside a Buddhist monastery.