How Many High Roads to Tibet

Lying on the high-altitude plateau of the Himalayas, Tibet is a land that has been isolated for centuries from the outside world until recently. China’s border with Nepal and India, Tibet was once an inaccessible place that would take weekss of trekking with horses and yaks to reach, and then weeks again to get out of the region.

Nowadays, it is a lot easier to get to Tibet, with new roads, a railway, and five airports that receive flights from across China, one of them being an international airport that also receives flights from Nepal. Of all the ways to get to Tibet, there are four major highways that lead from different parts of China to Tibet, as well as one that runs from the border with Nepal to the Tibetan capital of Lhasa.

Driving to Tibet is no longer just a dream, and with these new roads, traveling overland to Tibet has become a popular way to get to the plateau, as it allows for more exploration and is appealing to those hardy adventurers who want to experience the long, hard, dusty drive to the roof of the world.

The main road into Tibet, and the oldest of all the highways that branch out from Lhasa like a spider’s web, the Qinghai Tibet Highway, or the G109 National Highway as it is officially known, is just one end of a road that connects Lhasa with Beijing in eastern China. The total distance of the highway from Beijing to Lhasa is around 3,901 kilometers, although the last part from the Qinghai Province capital of Xining is just 1,917 kilometers, which is a little less than half of the total distance.

The road from Xining to Golmud was originally fairly dismal, with many gravel sections, until it was updated to a full asphalt road in 1985, and is now in good condition the entire distance to Lhasa. Dubbed the “Lifeline of Tibet”, the road has seen almost US$ 362 million in major overhauls since it was opened. 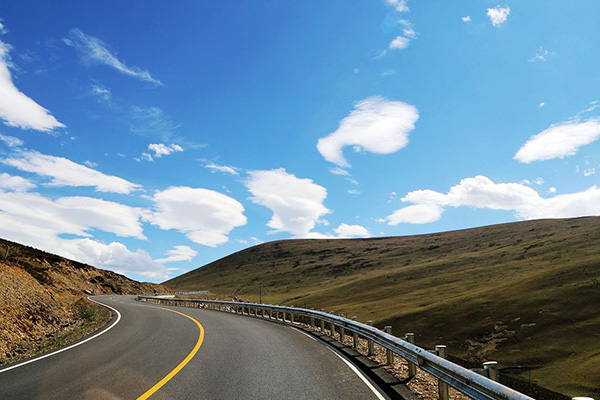 Highway from Qinghai to Tibet

The route of the highway travels from Xining to Lhasa, in an arc that loops up over the Kunlun Mountains and Tanggula Mountains. From Xining it passes the stunning sight of the Qinghai Lake, the largest lake in China, and the largest saltwater lake as well. The road continues on to Golmud, where it starts to climb up to the mountain ranges and the high-altitude Tibetan plateau, climbing over the Kunlun Mountains and along the Tanggula Mountains to the highest mountain in the range, crossing it at the Tanggula Pass, some 5,231 meters above sea level.

From Golmud to Amdo, the road covers a distance of around 700 kilometers across the mountains, dropping slightly to the northern plains of Tibet after crossing the Tanggula Mountains. From Amdo, it is a drive of around 80 kilometers to Nagqu, on the Qiangtang Grasslands. The grasslands, which are the storehouse of Nagqu Prefecture’s ecological diversity, are a huge nature reserve that is the home to many rare and endangered animals. After Nagqu, the road heads south towards Lhasa, passing by the stunning Lake Namtso, one of Tibet’s sacred lakes, past Damxung and Yangpachen hot springs, and finally to the Tibetan capital.

Another great road that is one of the most popular overland adventures for Tibet tours, the Sichuan Tibet Highway runs from Chengdu to Lhasa, running almost directly west to the Tibetan capital from Sichuan Province, a total distance of around 2,144 kilometers.

From Chengdu, the road runs out of the Sichuan Basin and into the lower mountains of Garze Tibetan autonomous Prefecture, passing through the Hengduan Mountains and towns such as Kangding, the gateway to the Yala Jokul Scenic Area and Minya Konka. Xinduqiao, further along the route, is a delightfully picturesque town that is a photographer’s paradise for the stunning plateau pasture scenery, mountains, and traditional Tibetan houses. 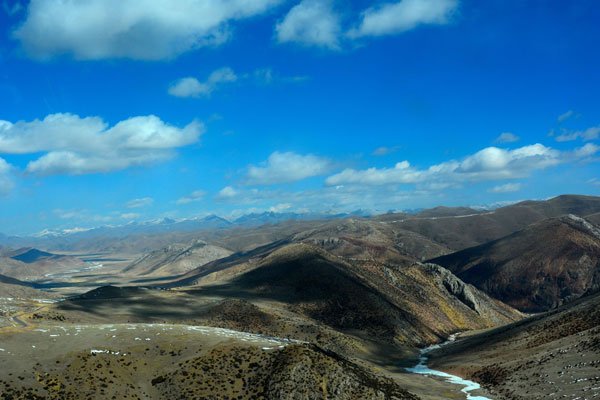 Highway from Sichuan to Tibet

After Xinduqiao, the road conditions are not the best, and there are many dirt and gravel sections of road that can be dangerous to drive along for an inexperienced driver. Through Litang and Batang, and across the boundary of Tibet to Markam, the road is patchy at best, and care should be taken. However, from Markam onwards, there are few patches of poor road, and the majority has an asphalt surface all the way to Lhasa.

Traveling through Nyingchi Prefecture, known as the Switzerland of Tibet, the mountains and valleys are lush and green, with peach trees dotted all along the sides of the road as far as the eye can see in places. Great for traveling in spring, the peach blossoms are stunning to see, and are the subject of the biggest festival in the area in April and May.

Starting at Kunming in Yunnan Province of Southeast China, the Yunnan Tibet Highway is actually only half of the highway that runs north from Kunming, known as the G214 National Highway. The whole highway runs from Qinghai to Yunnan, but the Yunnan Tibet Highway only runs from Kunming to Markam, where it joins the G318 national highway, to continue on to the Tibetan capital of Lhasa.

The road runs from Kunming to Markam, a distance of around 1,023 kilometers that runs up through the Hengduan Mountains, some of the most stunning mountains in southwest China. The road crosses through some of the most spectacular landscapes as it winds its way north, passing through primeval forests and lush green valleys that lie between the many high mountain passes. 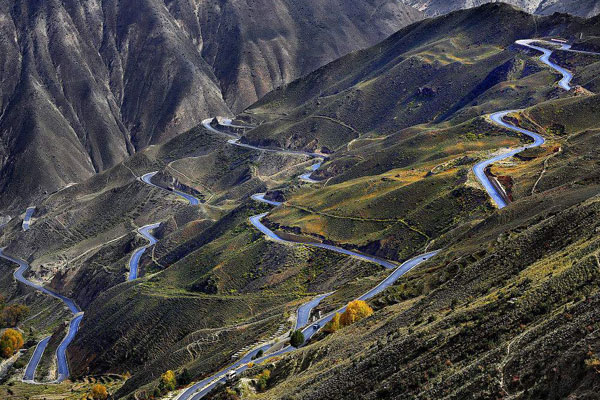 Highway from Yunnan to Tibet

The road passes through many beautiful Tibetan towns and villages along its route, where you can experience some of the traditional Tibetan ways of life, the most famous being at Shangri-La. The town was renamed in an effort to improve tourism to the area. Shangri-La is a beautiful city that is the home to the Pudacuo National Park, which is part of the UNESCO World Heritage Site of the Three Parallel Rivers of Yunnan.

Also known as the G219 National Highway, the Xinjiang Tibet Highway runs from Xinjiang Uyghur Autonomous Region to Lhatse in Tibet, where it joins the G318 Friendship Highway for the rest of the journey to Lhasa.

Starting in Kargilik in Kashgar, the road runs southeast in a winding arc for 2,095 kilometers until it reaches the Friendship Highway at Lhatse. One of the highest roads in the world, the route south runs through the stunning Rutok County, which is rated as one of the most inhospitable places on the planet. Although the road was originally made of gravel when it was first built in 1957, it was fully paved with asphalt in 2013, and is now one of the best laid roads in Tibet.

The route south also passes through the area of Aksai Chin, which has been a disputed area for decades, owned and administrated by China, but with India still claiming ownership. After Aksai Chin, the road passes into Tibet, and Ngari Prefecture, where it heads south to one of the most popular tourist sites in the area, Mount Kailash. The road passes just to the south of the holy mountain, and is the main route for tours to Kailash for both tourists and pilgrims. To the south of the road lies the holy Lake Manasarovar, one of the Great Three Holy Lakes in Tibet.

From Mount Kailash, it is then another 797 kilometers to the G318 Friendship Highway, passing by lakes and mountains as the road makes its way south and east. Apart from the stunning scenery and amazing Himalayan views, there is little in the way of tourist attractions between Kailash and Lhatse, so it is a chance to get some amazing landscape photos of a part of Tibet where people are rarely seen. From Lhatse, the G318 heads through Tingri and Shigatse to Lhasa, a distance of around 430 kilometers.

The single most famous road in Tibet, the international highway from Lhasa to Kathmandu is part of the massive G318 National Highway that starts in Shanghai in eastern China and ends at Zhangmu on the border with Nepal. The road is in good condition for the entire length, and has been paved with asphalt from Lhasa to Zhangmu. Every year, there are thousands of travelers choose to take a Lhasa Kathmandu overland tour through this road to enjoy the marvelous landscape and Tibetan culture from the central to the southern and western Tibet.

Leaving Lhasa, there are many things to see along the Friendship Highway, and it first follows the Yarlung Valley as far as Shigatse, passing through the heartland of Tibet, and one of the most beautiful areas in the region. From Shigatse, the road continues west, running parallel to the Yarlung Valley to Lhatse, where the fork for the G219 continues to follow the river valley, while the Friendship Highway turns southwest towards Gyatso Pass, at 5,260 meters, which is the highest pass on the entire road. From there it descends over 1,000 meters towards the border, and the former crossing point at the Friendship Bridge.