How to travel from Hong Kong to Lhasa by train

Traveling to the roof of the world can be a challenging trip. Whether flying to Xining and taking the train to Lhasa, or going by train from any of the other six cities in China that run a direct train to Lhasa, the journey is long and rigorous. So for those coming from Hong Kong, the trip is just arduous. There are four main ways to travel from Hong Kong to Lhasa, and they can take between 6 hours and almost three days.

One of the major reasons foreigners travel to Lhasa from Hong Kong is the lack of international restrictions. Hong Kong does not require a visa from most countries in the world and is an easily accessible gateway to mainland China. There are scheduled flights from all of the major international airports in the world direct to Hong Kong, and there is plenty to do and see there while waiting for your connecting flight or train.

English is one of the main languages spoken in Hong Kong, and the culture is still very British, after being a British overseas colony for almost 100 years. Now a part of China again, Hong Kong SAR incorporates the best of British culture mixed with Chinese foods, religions, beliefs and people. 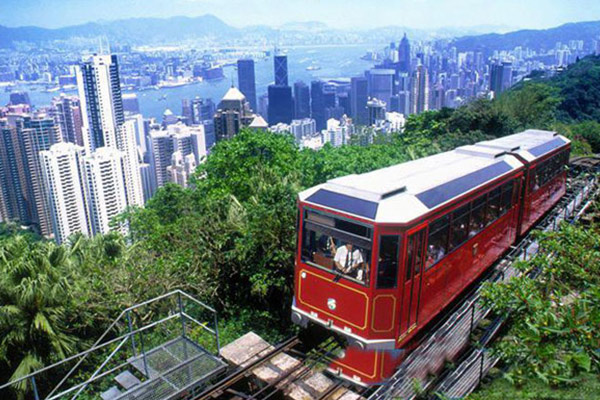 Ride the tram to the top of Victoria Peak

For those who have a few days to spare before their Tibet tours, it is highly recommended to tour the island and take in some of the best sights. Visit the Wong Tai Sin Temple in Kowloon, and then take in the last night market in Hong Kong at Kowloon’s Temple Street. You can easily ride the tram to the top of Victoria Peak - named after the former British Queen - or see the 34-meter-high statue of Buddha, which sits on the top of the Po Lin Monastery on Lantau Island.

After you are done seeing the amazing sights of Hong Kong, you can take your trip to Lhasa, and see the even more amazing sights of Tibet Autonomous Region, like the Lake Manasarovar, holy Mt. Kailash, or even Mt. Everest. At the moment, there is no direct train or flight from Hong Kong to Lhasa, so you will need to get into mainland China first. While many major Chinese cities have flights to Lhasa, the best choice is Chengdu, as it has a better selection of scheduled flights and the cost is less.

Different Ways to Travel from Hong Kong to Lhasa

The fastest way to get to Lhasa from Hong Kong is to fly to Chengdu, and then transfer to a flight to Lhasa. Although the cost is higher, the travel time is less than six hours, excluding transfers. Flights leave from Hong Kong International Airport for Chengdu Shuangliu International Airport five times a day, and the flight journey is only 2 hours and 40 minutes. Connecting flights to Lhasa from Chengdu are not a problem here, as there are over eleven flights every day, and there would be very little waiting time between connections.

The flight from Chengdu to Lhasa is the time-saving one taking only 2 hours and 25 minutes, making the total trip very short. Lhasa Gonggar Airport is situated about 60 kilometers southwest of Lhasa city, so there will be a short van ride into the city. It should be noted that this route, while faster, has major disadvantage as there is no chance to acclimatize to the high altitude, and travelers using this route are more likely to end up with mild altitude sickness.

If you love to travel to Tibet by train, then this is definitely the route for you. The train from Hong Kong to Guangzhou leaves from Kowloon Station, and crosses into mainland China, taking only two hours to get to the city of Guangzhou, which sits on the Pearl River, 120km north-northwest of Hong Kong. From there you will change trains for the direct trip to Lhasa. 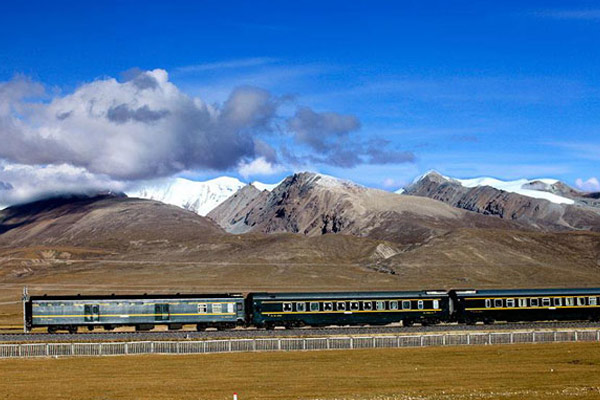 Travel from Hong Kong to Tibet by train

The Guangzhou-Lhasa train departs daily at 11.45 am and the trip takes around 53 hours. You will arrive in Lhasa in the late afternoon of the third day. The route passes by Wuhan, Xi’an, and Xining, before climbing up to the Qinghai-Tibetan plateau, and on to Lhasa. While this is a lovely and relaxing way to travel, it is not recommended for children and the elderly, due to the length of the trip and the lack of things to do on the train for kids. The tickets cost ¥865 for the hard sleeper berths, which accommodate 6 passengers, and are open to the rest of the train. The soft sleeper berths, on the other hand, cost ¥1,468 per person and can accommodate 4 passengers, with a lockable door and television showing local programs.

Taking a flight from Hong Kong to Chengdu and then a Tibet train to Lhasa, this journey is one of around 36 hours, excluding transfers, and is faster than the train from Guangzhou. The cost is not too high, unlike the direct flight route, and it takes in some of the most wondrous sights on the 3,000km train ride. 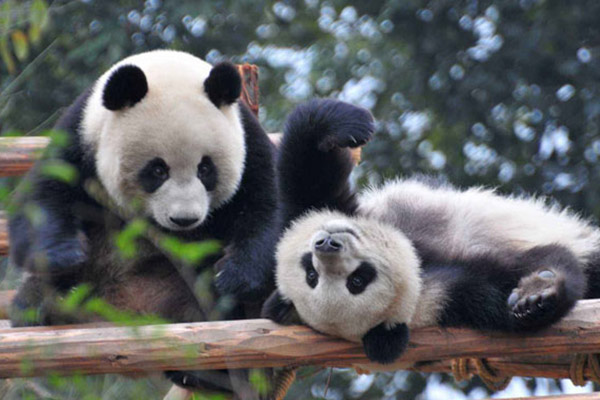 Visit Chengdu Panda Research Base during your stay in Chengdu

The Chengdu to Lhasa train (No.322) departs from Chengdu Railway Station, on Renmin North Road, and costs ¥627.5 for herd sleeper and ¥997.5 for soft sleeper. The route from Chengdu runs through Lanzhou and Xining on its way to Lhasa, and takes around 36 hours.

By flying from Hong Kong to Chengdu, then taking a connecting flight to the train at Xining, you can make this journey in only around 28 hours, excluding transfers. The train from Xining to Lhasa offers the fastest overland route, taking less than 24 hours. Xining is the start of the Qinghai-Tibet railway, and the best city to take a train to Tibet. You still get the chance to visit the Chengdu Panda Research Base if you wish, before your flight to Xining. And while in Xining you can see some of the sights of the capital of Qinghai Province, such as the Dongguan Mosque and Ta'er Monastery. 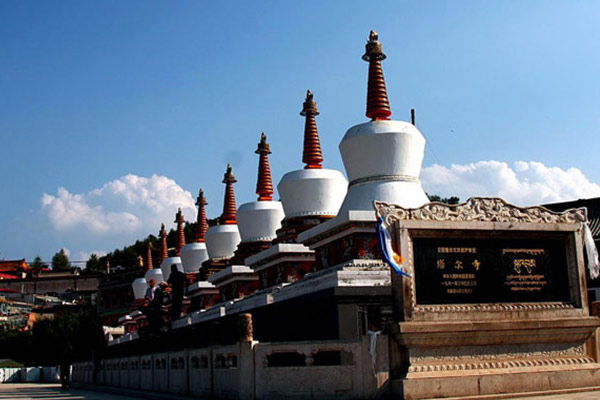 Ta'er Monastery is a must-see in Xining.

The main advantage of traveling by train from Xining is the benefit of being able to acclimatize to a higher elevation while in Xining, before continuing up to the heady heights of Lhasa, on the plateau. At an elevation of 2,275 meters, Xining is halfway to the altitude of Lhasa, and a great place to stop for a day and acclimatize to prevent altitude sickness on the journey up. It normally takes just one day at a higher-than-normal elevation to prevent altitude sickness. Xining also has the most frequent trains running to Lhasa and can accommodate more passengers, so there is a better chance of getting tickets than on the other routes. Ticket cost is only ¥495 for the hard sleeper berths and ¥781 for the soft sleeper berths, making this the lowest cost train to Tibet.

How to Buy Tibet Train Tickets in Hong Kong

Besides, for foreign tourists taking a Tibet train to Lhasa, you need to first obtain the Tibet Travel Permit for check before boarding. The permit can only be applied through a local Tibet travel agency and usually takes two weeks to get issued. In this occasion, we offer an easy and hassle-free solution for you to book your Tibet train ticket online as well as getting the Tibet Travel Permit. Please feel free to contact us for more details.

Except taking flights or Tibet trains to Lhasa via some gateway cities, tourists can also enjoy a high speed train journey to mainland China firstly. Owing to the opening of the Guangzhou-Shenzhen-Hong Kong high speed railway, tourists are able to take a high speed train from Hong Kong to mainland China, reaching 17 major cities, including Beijing, Shanghai and Chengdu, which are both popular tourists destinations and important gateways to Tibet. 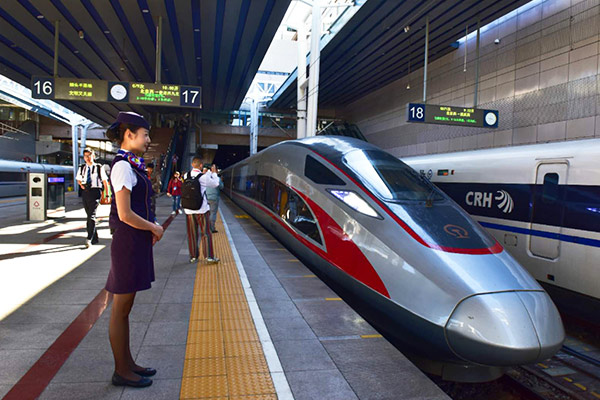 The high speed train from Hong Kong to Beijing runs in a direct way with no transfer en route, and only takes 8 hours and 30 minutes to arrive in the capital city, saving nearly 15 hours compared to the Z97 train as a regular route taking more than 24 hours between the two cities. Travelling from Hong Kong to Shanghai by high speed train also becomes much time-saving, only requiring 8 hours and 17 minutes, while the regular Shanghai–Kowloon through train takes around 20 hours for the whole train journey.

Although Chengdu cannot be directly reached from Hong Kong by high speed train at the moment, it is still very convenient to transfer between the two cities. Tourists can first take a high speed train to Guangzhou, and then change to the bullet train from Guangzhou to Chengdu. It only takes one hour for the short ride from Hong Kong to Guangzhou, while the bullet train from Guangzhou leaves several times every day and takes as low as 9 hours to reach Chengdu.

As a matter of fact, taking a Hong Kong high speed train to mainland China before your trip to Tibet is time-saving and meaningful. You will not only experience an extraordinary high speed train journey, but also can spare more time to tour some other popular destinations in China. Therefore, it is an ideal choice for tourists looking forward to enjoy a China Tibet tour from Hong Kong with a high speed train experience.

More Insider Tips on Travelling from Hong Kong to Tibet

It is recommended that you take some things on the train with you, for this extremely long journey. While there is a television in the soft sleeper berths, it is only local channels, so something for entertainment would be of benefit. Books or tour guides can help to pass the time, when not looking at the scenery through the large windows. And some music on your phone or mp3 player is a good idea too.

Food is available on all trains to Lhasa, and consists mainly of Chinese dishes, with a few Tibetan ones for the more adventurous traveler. However, it is best to take some food with you if you are not familiar with Chinese or Tibetan food. Pot noodles, packet meals and such are a good choice, as there is boiling water available on the train. Snacks and drinks - tea or coffee sachets - will help for those times when you just want something quick. Drinking water is also available on the train. There are washing facilities as well, although you will not be able to shower. Take toiletries with you, as you will be on the train for almost 3 days.

The trains are all air-conditioned to keep the temperature constantly comfortable throughout the trip, so comfortable clothes and light shoes are suggested, instead of the heavy boots and thick clothes you will need when you get up to the plateau.

Whichever route you choose, you will enjoy a wonderful Hong Kong Tibet tour which is filled with amazing sights and wondrous experiences, and the journey of a lifetime.