When is the Best Time to Take a Tibet Train Tour?

Tibet train tour is the most popular and spectacular way to visit Tibet. The scenic, high-elevation Qinghai-Tibet railway (also known as Qingzang railway) enables passengers to travel by rail from Beijing, Shanghai, Chengdu, and other main Chinese cities all the way to Lhasa, the ancient capital of Tibet.

Usually, April to November is the best time to take a Tibet train for a Tibet tour. Periods spanning from April to May and from August to October feature less rain and moderate temperatures, which are conditions ideal for traveling in Tibet Plateau.

The scenery of Tibet between April and November is quite beautiful. Although the nights tend to be cold, you will benefit from the high-altitude sun during daytime activities. And it is also the best time to enjoy a clear view of the peak of Mount Everest at the base camp.

Summer is also a good time to visit Tibet. However, for a Tibet train journey, it is the busiest time during the year. In summer holidays, the Tibet train is in the high demand, rendering tickets more expensive than usual and difficult to buy. If it is the only time you can plan a trip to Tibet by train, secure train tickets well in advance.

Winter in Tibet is harsh, as you would expect, and trek to Mount Kailash and trips to Namtso Lake would be unavailable for the road is blocked due to the heavy snow. But Lhasa city and around is also available to visit. And in winter, you can easily get the Tibet train ticket with fewer crowds onboard.

Here we are going to tell you more details about when is the best time to visit Tibet by train.

Spring and Autumn: The Best Time for Admiring Landscapes of your Tibet Train Tour

The period from April to May and from September to October is also the best time to visit Tibet, as well as take an Everest Base Camp tour for the clear weather offers a great chance to see the peak of Mount Everest. 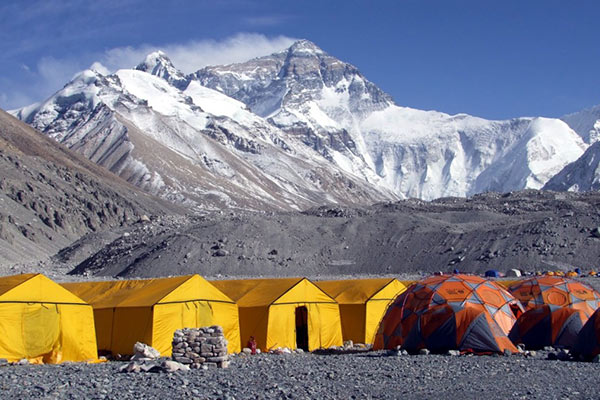 Weather Condition of Tibet in Spring

Traveling by Tibet train across the Tibet Plateau in spring is a special treat for every visitor. Along the way, you will witness a change of scenery that encompasses distant snow-capped mountains, blossoming trees, green fields and calm lakes whose surfaces reflect all of that, and more.

Air temperatures in March and April typically fluctuate from a few degrees below freezing to around 10°C (50°F) in March and up to 20°C (68°F) in April. May is the best time of spring to come to Tibet since low temperatures remain around 5°C (41°F) while the highs rise over 25°C (77°F). Rainfall is low throughout spring, and virtually non-existent at higher altitudes in May.

Weather Condition of Tibet in Autumn

Autumn is a magical time to witness the beauty of Tibet on board a train. You will unavoidably spot herds of various wildlife species (yaks, antelopes, and donkeys) roaming vast plains, while vultures and other birds fly overhead. The sight of high mountains framing grasslands and valleys is something you won't forget any time soon.

Autumn in Tibet corresponds to September and October while winter weather starts to manifest itself already in November. Both autumn months feature low rainfall, but September is warmer than October and a better month for outdoor activities. Air temperatures in September range from around 5°C (41°F) to 20°C (68°F), sometimes even up to 25°C (77°F). October is pretty cooler, with temperatures occasionally dropping below 0°C (32°F) and rising up to around 15°C (59°F).

Summer: The Peak Season for Tibet Train Tours, but Hard to Get a Train Ticket

Summer is absolutely a good time to enjoy the beautiful plateau landscape. The countryside looks almost serene along the route of Tibet train during summer. Verdant environment contrasts with snows on mountain peaks and clear, blue sky. Occasionally, you will spot white clouds adding a bit of contrast to distant brown hills, and herds of wildlife grazing on the green fields.

Weather Condition of Tibet in Summer

Summer is the warmest season in the Tibetan Plateau, with a tendency to get hot at times. June and July are warmer than August, with average temperatures fluctuating from around 5°C (41°F) to around 25°C (77°F). August features high temperatures between 20°C (50°F) to 25°C (77°F), while lows almost tip freezing point. While most of June is dry, more or less, July and August are rainy months. With the accumulation of rainfall exceeding 130 mm (5 in), August is the rainiest month in Tibet throughout the year.

However, summer is the time when many Chinese and foreigners travel to Tibet, which renders the train ticket very difficult to get. Besides dealing with such difficulty, the cost of the Tibet train cost significantly increase due to the peak tourist season.

If you decide to take a Tibet tour by train during the summer holiday, secure the train ticket as early as possible, even months before the scheduled trip. Moreover, many travelers visit Tibet in August because of the famous Shoton Festival, which is a major Tibetan festival to experience the unique Buddhist culture and alpine scenery in Tibet.

Winter: The Best Time for a Quiet Train Tour

In winter, Tibet receives fewer visitors than during other seasons, which corresponds to low demand for Tibet train tickets, standard fares, and empty trains. By taking your Tibet train tour from November to February, you can observe vast snowfields and withered pastures from your train. Along the way, you will see frozen rivers, mountains clad in white and, sometimes, occasional donkey and antelope herds. All in all, the Tibetan countryside in winter is less vivid and more monotonous compared to spring, summer, and autumn. 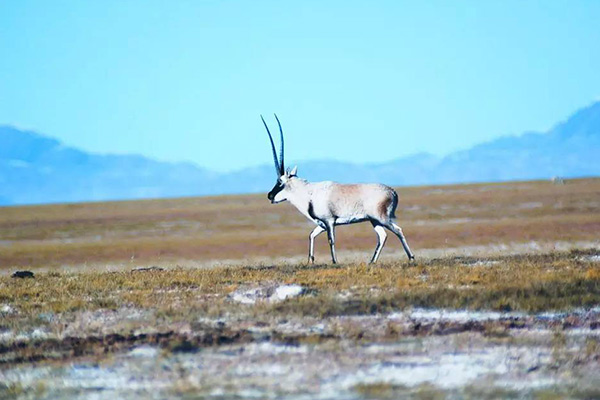 See the Kekexili area in winter from the Tibet Train

Weather Condition of Tibet in Winter

Air temperatures vary to a large extent in Tibet in winter depending on the region. However, temperatures around Lhasa, which receives most travelers in winter, commonly vary from -10°C (14°F) to around 10°C (50°F). Thanks to the location of Lhasa, precipitation levels (both rainfall and snowfall) are surprisingly low here, much lower than in other areas of the Tibetan Plateau. More so, the high-altitude sun and its sunlight may surprise you during dry months of December and January, warming you up while you are in the countryside.

In winter, many remote tourist hotspots in Tibet don't operate, but you can still visit Tibet in winter to enjoy trips to Lhasa, Shigatse and Everest Base Camp. Moreover, you can still take trekking routes to explore the area around Lhasa. Wear warm clothing and a sturdy winter coat so you can concentrate on enjoying the Tibet winter in its whole beauty.

Another great advantage of a Tibet winter tour by train that escapes most foreign travelers is Losar, the Tibetan New Year. Losar is the most important Tibet festival by far. Pilgrims and visitors arrive in Lhasa from many parts of Tibet to attend the festival, allowing you to see joyful Tibetans of all ages. As the Chinese New Year, this is a great occasion for the family reunions and many prayer activities.

Tibetan New Year is the grandest in Lhasa, featuring a jolly atmosphere, singing and dancing shows, and firecrackers. Celebrations of Losar traditionally last 15 days, but the first three days are the most important.

Tibet is a popular destination among the Chinese as well as among foreigners. If planning to visit Tibet and take a Tibet train tour, avoid Chinese national holidays and the summer season. On these occasions, many Chinese residents visit the Tibetan Plateau and various businesses tend to close. Besides having difficulties in finding reasonably-priced tours and hotel rooms, you may have issues finding an open shop in Lhasa, the capital of Tibet. More so, finding tickets for Tibet train during these times, even with inflated prices, is extremely likely to present a challenge.

Q: Which Tibet Train should I take for the best part at the best time?

Once you have decided when to take a train to Tibet, you may think about which train is the best one to take for the most beautiful scenery. In fact, all trains run from Xining to Lhasa during daytime offer a great view of the most essential part of Qinghai-Tibet railway. 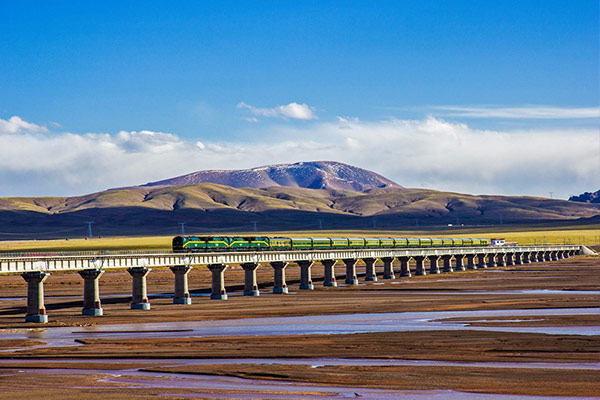 For trains leaving Xining in the early afternoon, such as Beijing Lhasa train, Chengdu Lhasa train, and Chongqing Lhasa train, you’re able to see the highland grassland views of Nagqu to Lhasa part, which is the essence of Xining-Lahsa section.

Later trains leaving Xining when it’s dark, on the other hand, will allow you to see the pristine beauty of Hoh Xil apart from Nagqu-Lhasa part. Examples of these trains are those departing from Shanghai and Guangzhou.

Taking a Tibet train tour has its merits regardless of the season. When planning a trip to Tibet, you have some options to choose from.

Spring and Autumn, from April to May and from September to October, are the best time to go for the standard train fares, ideal weather in Tibet, incredible countryside along the way and fewer travelers onboard than in summer.

Summer, when many domestic Chinese tourists visit Tibet, is also a good time to enjoy the beautiful landscape, but at a higher journey cost. And it is really difficult to book a Tibet train ticket from Beijing, Xining and some other popular gateway cities during the summer holiday.

Winter may be not an ideal season for amazing landscape, but for taking a train to Tibet, you can take the standard fare with fewer travelers onboard than in any other seasons.

No matter when you plan to start your Tibet train tour, the best train to Tibet with the best landscape is the trains that run from Xining to Lhasa during the daytime.

To make an early reservation, especially when you plan to go in the summer, is important to secure you got a Tibet train ticket. Moreover, a reputable travel agency, like us, can help you make your dreams come true and have an unforgettable trip to Tibet.

For a more worry-free trip to Tibet, you can browse our Tibet train group tour packages, which covers the most essential itineraries in Tibet with frequent departure dates during the whole year and include a guaranteed train ticket to Tibet.

0 Comment ON "When is the Best Time to Take a Tibet Train Tour?"