There are many routes to get into Tibet. Tourists can get in through different ways from Mainland China. There are flights from various major cities of China to Lhasa. Shanghai, Beijing, Guangzhou and Chengdu all have flights to Lhasa. While flights may be the quickest option to travelling to Tibet, they are also the most expensive and also the least interesting. A better alternative would be taking the train to Lhasa. It is comfortable, cheap and the route to Tibet is extremely scenic. While it does take longer than flights, it is recommended that travellers not miss this unique opportunity to see the Chinese countryside en route to Tibet. For those travelling first time to Tibet, it is recommended they take the Beijing-Lhasa train via Xi’an. This article will further elaborate on the reasons as well as comparing the best route to Tibet.

The primary train route to Tibet is called the Qinghai-Tibet Railway. It is an engineering marvel at 1,956 km and at many points it is known to be the world’s highest railway line. It connects Xining in the Qinghai province to Lhasa. It connects the central of China to Lhasa. This route is especially scenic as it passes through mountains, tunnels and mountain passes. It goes at an approximate altitude of 4000m. The scenery is breathtaking on the way. Passengers can board the train at Xining and watch the train climb the Tibetan plateau.

Booking tickets for this train has to be done months in advance since this is a very popular route. It has to be done only through tour agencies and operators. Tickets generally cost around¥781 (USD 113) per person for the soft sleeper. The travel time takes around 22 hours from Xining to Lhasa. It is recommended that tourists book their tickets well in advance as preference is given to those who book early. 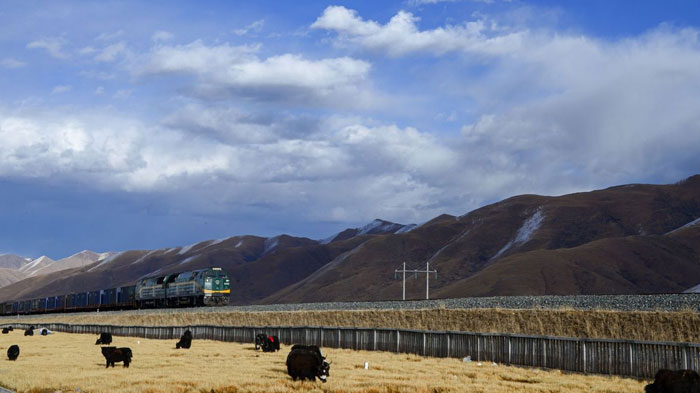 The train route starts at Xining and goes through various cities in the TIbetan plateau like Golmud, Amdo, etc. It also passes through the large and scenic Qinghai lake. It is recommended that travellers take the train from Xining instead of other cities because the slightly higher altitude at Xining will help travellers adjust to the height and low oxygen levels of Lhasa. It does not become a shock on the body. The train passes through the majestic Kunlun Mountain pass, which is a must see for anyone travelling to Tibet. The traveller will also be passing through numerous rivers and mountains.

Another route option to Lhasa would be the Beijing to Lhasa train. It starts from Beijing and goes 3757 km through 8 provinces to reach Lhasa. It takes approximately 42 hours to reach Lhasa from Beijing. This train passes through very important and culturally significant cities like Xi’an and Xining. This train route is recommended for first time travellers because it starts at the Chinese capital city of Beijing. It connects the North of China to Lhasa.

The few reasons why this route is recommended over others is that it allows the traveller to arrive into the international airport at Beijing. Also Beijing itself should be included as a must see on anyone’s itinerary. It has numerous attractions and being the capital city it is also better organized and more tourist friendly that the other provincial cities like Xi’an or Xining.

Secondly, Beijing has more trains so travellers can choose the timings based on their convenience. Also since the trains go through 8 provinces, travellers can get an idea of what to see in the provinces. It is like a mini China tour!

The train passes through Xi’an which is a very historical city. It was located on the silk route and was one of the entry routes into Tibet. It is a beautiful city with lots of lovely pagodas and caves. Travellers can get a glimpse of this city as they pass through. Once the train crosses Xining to enter the Tibetan plateau, the sights are absolutely breathtaking. The train passes through the Kekexili Protection Area which is a national park for Tibetan fauna and flora. One can see wild yaks, antelopes, brown bears, etc. The area is populated by beautiful apricot, poplar and oak trees. 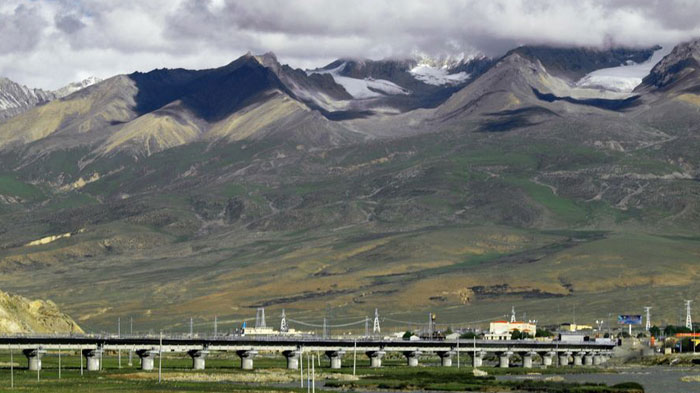 Then as the train climbs steadily higher, travellers will pass through the precarious Tanggula pass (5072m) and enjoy the wonderful mountain scenery. While this trip is much longer and costs more (about USD166 per person, for soft sleeper), it is definitely worthwhile because of the sheer amount of things once can see on the way to Lhasa from Beijing.

Third in our article we have the Shanghai to Lhasa route. This is one of the longest train routes to take. It covers 8 provinces too, like the Beijing to Lhasa train. It is approximately 4373 km long and it takes about 48 hours to complete. It connects the East of China to Lhasa. 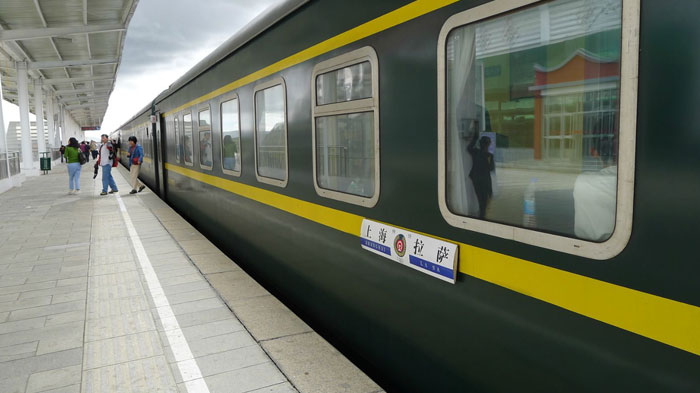 The train passes through major cities like Wuxi, Nanjing, Xining and Golmud. Nanjing is one of those must see cities because of its historical significance during the world war 2. It is an interesting and cultural place to visit. Passing through Nanjing allows travellers to get a glimpse of this city.

Once the train reaches Xining, the views are the same as those mentioned above. The mountain passes, the Gobi desert, ascent into the Tibetan plateau, etc. It is a fascinating ride. As this is a fairly long route, the time taken to reach Lhasa is longer (almost 3 days) and the cost is also higher (about USD 185 per person for soft sleeper).

The train goes to Lhasa via Xi’an, just like the Beijing to Lhasa train. It passes through many different provinces like Henan, Hunan and Wuhan. It gives a glimpse of the Chinese provinces and the route is quite scenic. Finally it passes through Xining and enters the Tibetan plateau. 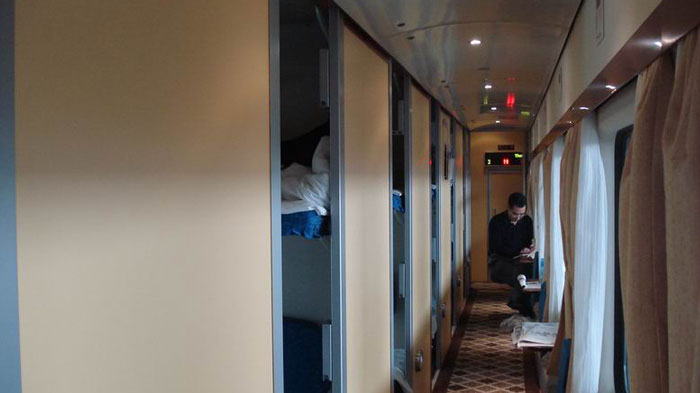 Inside the Train carriage

This route is quite long, although fairly comfortable like the rest of the trains to Lhasa. It is recommended travellers choose the soft sleeper berth.which although more expensive is comfortable and practical for the long journey. The cost of a soft sleeper from Guangzhou to Lhasa costs around USD 215 per person.

The last but not least in our list is the Chengdu to Lhasa train. It runs around 3070 km and takes almost two days to reach from Chengdu to Lhasa. It connects the south-central of China to Lhasa.

Chengdu is a popular destination because not only is the route shorter and cheaper, Chengdu is famous for its Giant Pandas! Tourists find meeting the pandas of Chengdu a very interesting experience. 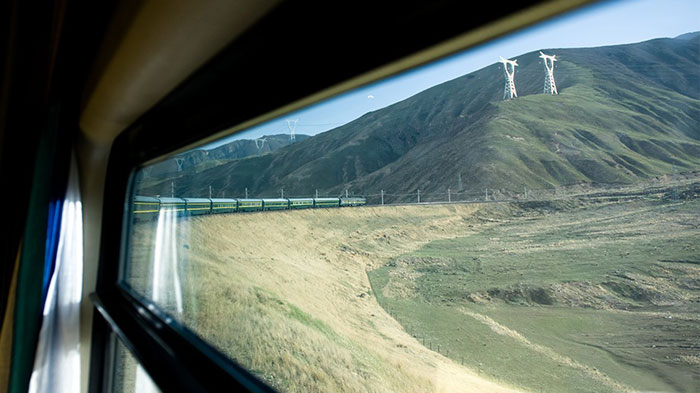 Enjoy scenery on the train

Travellers often choose this route because it is short and costs around USD 155 for the soft sleeper. The train runs only once a day every day so travellers need to plan their trips to be in time for the train.

There are different routes to Lhasa from different parts of China. Depending on where the traveller is coming from, he or she can choose their nearest station of boarding. It is recommended that first time visitors to Tibet should take the train from Beijing to Lhasa because the train travels through the length of China and travellers can see the Chinese countryside in its varying forms.

Also Beijing being the capital of China offers tourists plenty of resources to get around due to the many tourist centres found there. First time travellers would find it more reassuring to go through Beijing as it is fairly tourist friendly compared other smaller cities. 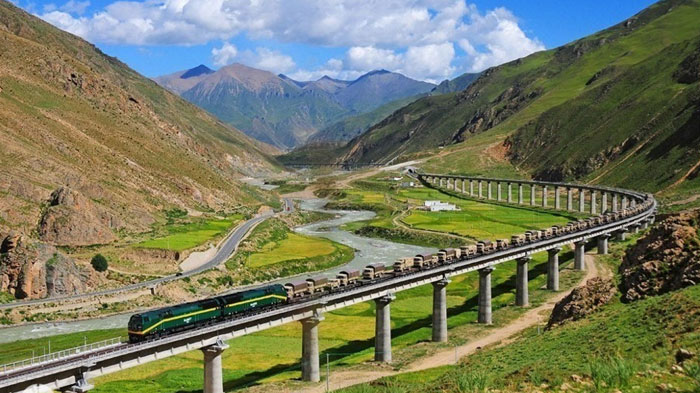 Landscape on the Qinghai-Tibet Railway

Compared to other modes of transport to Tibet like flight or road, the train is by far the most comfortable and memorable. The traveller can experience Chinese countryside as well as Tibetan countryside, beautiful scenery and see the local life at stations and through towns.

Travel Tips: Due to the reshuffle of Tibet train route, currently direct Beijing to Xi'an train is not available. You may take Beijing-Xi'an train to tour the ancient capital of China and then take Xi'an--Lhasa train to reach Tibet.