Rated as “Asia’s Best Destination in Winter” by CNN Travel and “China’s Top 12 Destinations in Winter” by Global Travel, the winter in Tibet has attracted the attention of tourists from all over the world. Here are 8 must-do things if you travel Tibet in winter:

1. Enjoy the Sunlight in Lhasa

Lhasa’s altitude of 3,656 meters above sea level means that it gets more sunlight throughout the year than most places around the world. From December to February, the Tibetan capital sees less than one day of rainfall a month, and an average of 10-11 hours of daylight every day. 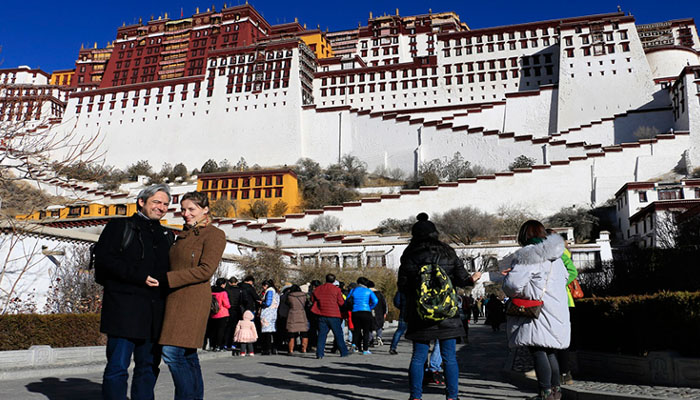 Peaceful Potala Palace in the warm sunlight in winter

With sunlight hours per day averaging around 8.1-8.3, Lhasa has a higher-than-average amount of sunshine from December to February. Clear blue skies prevail for almost every day, and the dry crisp air of the winter months, which are still a little cold, mean you can see all the way to the far mountains of the Himalayas, on the southern edge of the plateau.

Without the hurrying crowded tourists in summer, you can enjoy the warm sunlight during our Lhasa city tour in a way as ease as you like.

Summer in Lhasa can be a mind-boggling swamp of thousands of tourists trying to all get into the same tourist attraction at the same time. In this crush of bodies, it is easy to get stressed, and the last thing you want when enjoying a serene Buddhist monastery or spectacular palace is stress. Millions of tourists from different countries in the world travel to Tibet every year, with the bulk traveling in summer from May to September. 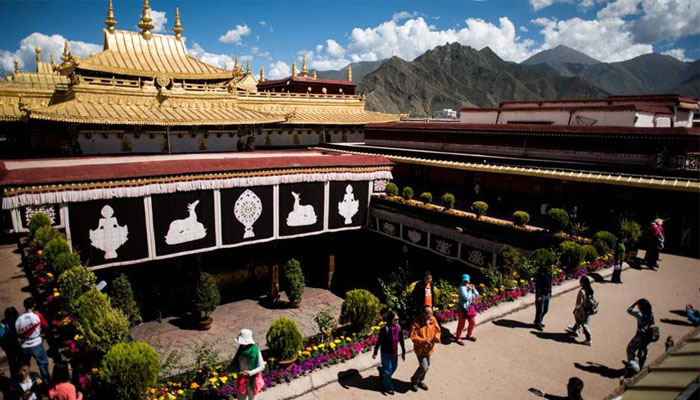 Winter in Lhasa means a lot fewer tourists and less people trying to crowd into the Potala Palace and Jokhang Temple all at once. This gives you a better opportunity to take a more leisurely stroll around the major attractions of the Tibetan capital, taking your time in experiencing some of the most outstanding Buddhist structures on the planet.

The Tsongkhapa Butter Lamp Festival, also known as the Gaden Ngachen Chenmo Festival, is held across Tibet to commemorate the death of the founder of the Gelug School of Tibetan Buddhism, Je Tsongkhapa. Held on the 25th day of the tenth month in the Tibetan Buddhist calendar, the festival is an amazing experience in Lhasa, with butter lamps lining the streets of Barkhor, in every window and doorway, and even along the edges of the roofs. 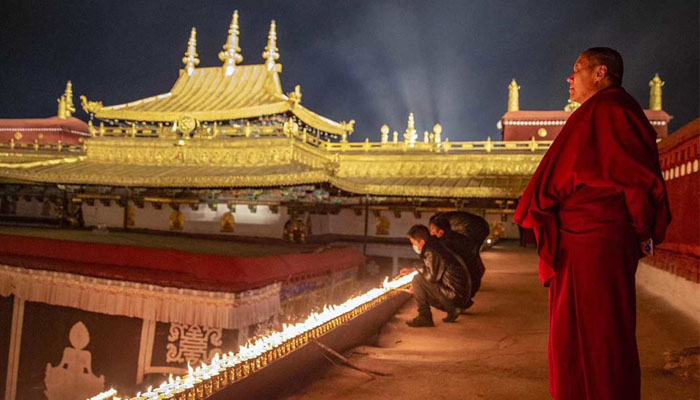 Every year, crowds of Buddhists and tourists come to the Jokhang Temple to celebrate the Tsongkhapa Butter Lamp Festival. Accompanied by the sound of the Tibetan suona, the butter-sculpted lamps are lit all around the temple and in the square in front. Waves of lit candles also spread out across the city, as people light them on their rooftops. And the sparkling lights of the butter lamps on the roof of the Jokhang Temple itself are a sight you should never miss.

You can also celebrate the Tibetan New Year with Tibetans in Lhasa. The biggest festival on the plateau, Losar, as it is known here, is a huge celebration that lasts for around 15 days in February or March.

4. Have a Clear View of Mt. Everest

Known as Chomolungma in Tibetan, Mount Everest is the most popular destination for international tourists to Tibet. And in the winter months, contrary to most opinions, it is still possible to travel across the plateau to the base camp at the foot of the northern slopes of the world’s highest mountain. 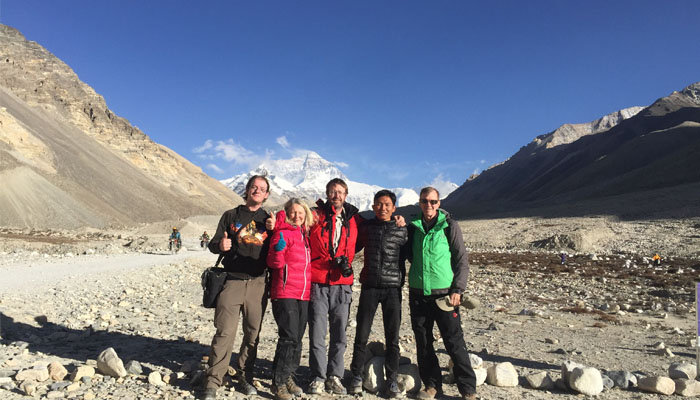 One of the major advantages of visiting the Everest Base Camp (EBC) in the winter is the clear, cloudless skies, which allow a much better view of the peak of the mountain. The base camp is located around 12 kilometers from the line of the summit, but the sheer size of the mountain means it can be clearly seen from the base camp, which has the best views of the mountain from anywhere in the world.

While it may be a freshwater lake, Lake Yamdrok, also known as Yamdrok Tso, does not freeze in the winter months, and the waters are clear and crystalline, changing from its usual turquoise-blue to a lighter blue-green as it gets colder. At 4,441 meters, it is the largest inland lake in the northern Himalayas, and spreads out for more than 130 kilometers from east to west. 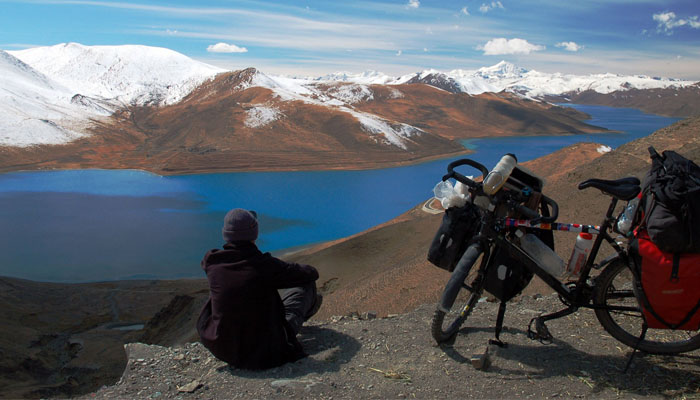 Lake Yamdrok is one of the places where you are likely to see snow in central Tibet, as it is surrounded by mountains and at a high elevation. The snowy shores contrast beautifully with the blue-green waters of the lake, and often last until well into spring. You can also get a great view of the surrounding mountain peaks in the winter months, with the crisp clear skies, dotted with wispy white clouds during our Yamdrok Lake winter tour.

Tibet plays host to millions of species of plants and trees, and is one of the showcase areas for most of the plant life in mainland Southeast Asia. And no place is more like a natural plant museum than the Lulang Forest in Nyingchi Prefecture in the east of Tibet. A vast area of natural forests at an altitude of around 3,700 meters, the forests are one of the most beautiful locations on the planet. 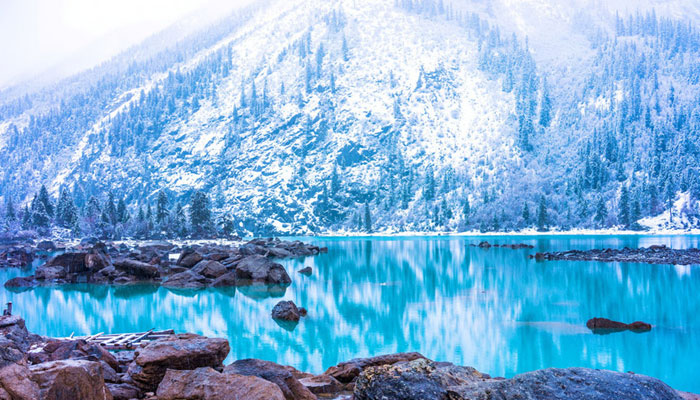 The green forest decorated with white snow in winter

And winter is an even better time to join the Lhasa to Nyingchi tour to visit the stunning Lulang Forest. As the cold descends on the eastern areas of Tibet, the snow begins to fall on the trees, covering the tops with a white dusting. Frost in the morning turn the snow into a myriad of sparkling colors as the sun rises over the forests, and the whole area turns into a winter wonderland, as if from some fantastic fairytale.

Winter is also a good time to visit this area, as the forest stretches around the famous Mount Namche Barwa, the gateway to the Yarlung Tsangpo Grand Canyon and the highest peak in Nyingchi at 7,782 meters.

Built in the 7th century on the site of the meditation caves of the Indian Buddhist saint, Padmasambhava, the Terdrom Nunnery is well known for its famous hot springs. And there is nothing better than a winter dip in a relaxing hot spring to ease away the aches of a long trek or several days of driving. 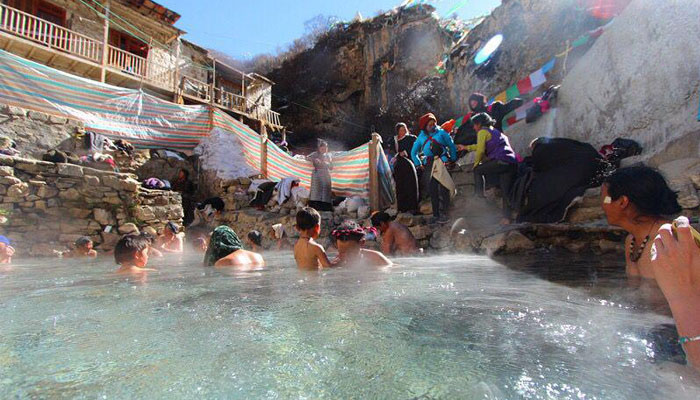 The hot springs at Terdrom are still relatively undeveloped, and include separate pools for men and women, with a natural creek at the bottom that is popular for bathing in. Located in the Drigung Valley to the east of Lhasa, the hot spring is a popular place for locals, and its natural healing powers are believed to heal any illness.

A medium-sized crane that is indigenous to Asia and breeds only on the Tibetan plateau, the Black-Necked Crane is classed as “vulnerable’ in conservation, and is revered in many Buddhist traditions. Found in several places on the plateau, the best place for viewing these beautiful birds is in Linzhou County of Lhasa, to the northeast of the city itself. The Hutoushan Reservoir has become one of the main winter feeding grounds for these amazing creatures, who migrate thousands of miles across the plateau between summer breeding areas and their milder winter homes.

The graceful black-necked cranes gather in Lhasa to overwinter

Flying down from the Changtang Grasslands in northern Tibet every year in October, the cranes spend the winter foraging in the area of the reservoir and nesting for the winter months in the reeds that line its shores. Tibet is home to more than 10,000 birds at present who stay until it warms up in around late March.

Besides enjoying the splendid scenery, you can get close to Tibetan people, culture, and nature in winter. If you want to know more about the Tibetan people, understand a little more about the unique Tibetan culture, and explore its devout Buddhist religion, winter is a great time to visit Tibet for an even better plateau experience. Do not hesitate to contact us if you hope to join our Tibet winter tours.