Situated on the roof of the world and influenced by the special geography, Tibet has formed a unique weather in winter. The weather in Tibet in winter can change from area to area, while one county is snow, the other is bright and sunny. However, the weather in winter is still warm enough in many places to allow a visit.

The winter in Tibet is not as cold as you think, and for many people, winter can be a great time to travel to Tibet. The weather in Lhasa is actually warmer than that in Beijing in the winter months from November to February.

Temperatures in Tibet vary from area to area, with the higher altitude areas of the plateau often being much colder than those at lower altitudes. On average, the temperatures range from a balmy 8-13 degrees throughout the winter in Nyingchi, the lower area of Tibet, to as low as -12 to -17 degrees at the Everest Base Camp. 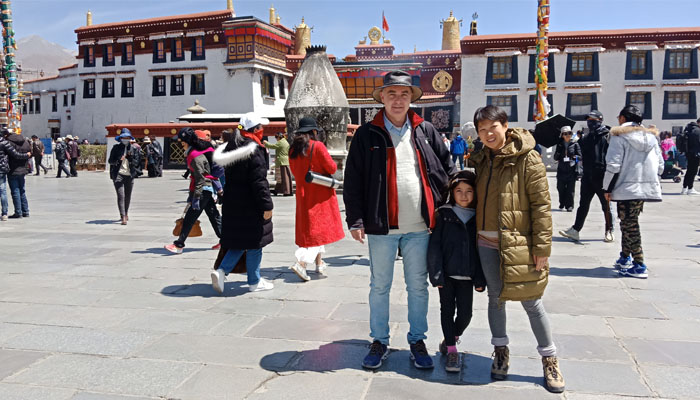 Our clients enjoying the bright sunlight around Jokhang Temple in winter

Tibet is also a region that has a huge difference in the temperatures from day to night. While the days can be warm and sunny, the nights are often cold, in many places well below freezing. This large temperature differential can be found as a common factor all across the plateau, with an average difference of around 13-20 degrees Celsius.

One of the benefits of this high-altitude region of China is the high number of daylight and sunshine hours the plateau experiences throughout the year. Lying at around 28° north, Tibet has less hours of daylight in winter than in summer. On average, the plateau sees around 10 to 11 hours of daylight per day in the winter months from November to February, with an average of around 8.35 hours of bright sunshine per day. While Lhasa, which enjoys abundant sunshine all the year around, is known as the City of Sunshine.

Humidity on the plateau depends on the season, and through the winter months, while there is little rain, humidity normally averages around 28 percent through any given month. Humidity can also depend on the region of the plateau, with higher humidity in the east of the region, and much lower humidity in the northwest.

Rainfall is common in Tibet, despite ideas that it is always snowing there. However, in the winter months, there is actually very little rain across the whole plateau. From November to February, the average rainfall in Tibet is around 1.1mm per month.

Snowfall does not actually happen all over the plateau region, as many parts of the plateau are low enough in altitude to not get the harsher winter conditions. Most of the snow in Tibet falls in the north, west, and south of the region, in the areas around Nagqu, Ngari, western Shigatse, and Shannan. Lhasa sees snow rarely, and in Nyingchi and Chamdo, even in the depths of winter, the only show is normally on the top of the mountains.

Tips: Situated 54 miles from Kathmandu Airport, the actual temperature in Gyirong Town varies a bit from that of Kathmandu.

Winter runs from November to February, and in Lhasa, the weather is mostly dry and windy, with plenty of sunshine throughout the day. Sunshine in winter is often high and bright, and the city rarely sees cold winter, though it can get a little chilly at night. It is still a good idea to pack a couple of sweaters and jackets, as well as the sun block, moisturizer, and lip balm. 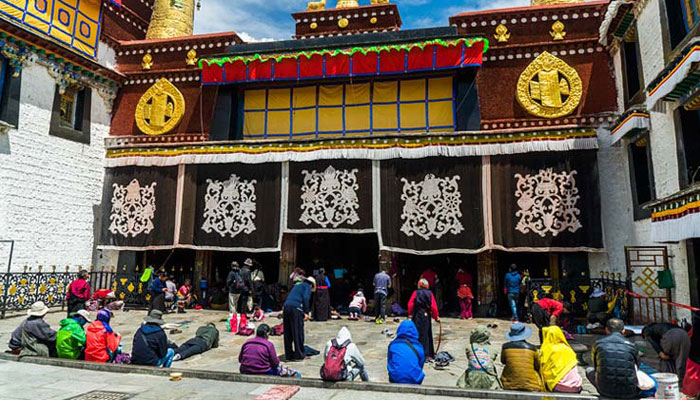 Winter is the season of pilgrimage in Lhasa, Tibet

Winter in Shigatse is similar to Lhasa, albeit a little colder and harsher than in the Tibetan capital. Temperatures are a lot colder during the day, and the day/night difference is higher, as well as being hit with biting winds from the western Himalayas throughout the winter months. 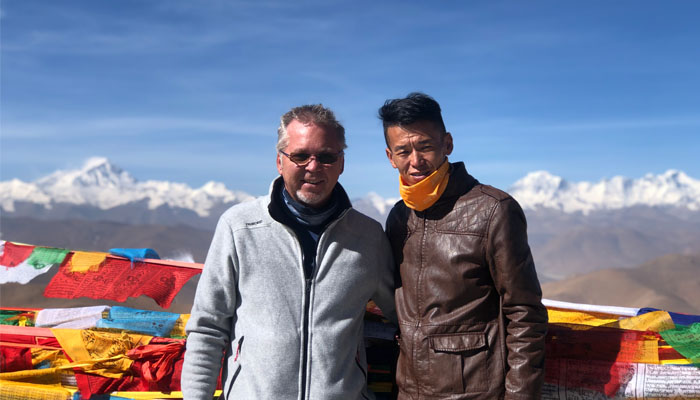 Capturing the panoramic view of the Himalays in winter at Gawu Mountain Pass, Shigatse

Even at the altitude of the base camp, the climate of EBC is still that of a typical plateau monsoon climate, and while the winter is normally fairly dry, there is often rain each month throughout the winter. The temperature differential is also the highest on the plateau, and has been known to drop as low as -28°C in the coldest month of the year. 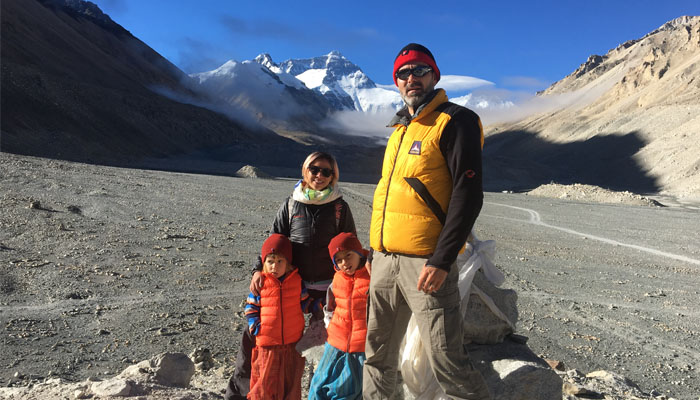 Enjoying the clear view of Mount Everest in winter

Covering a vast area, the average temperature in Gyirong County differs greatly from that of Kathmandu. However, the Gyirong Town we visit is only 54 miles from Kathmandu Airport and has very similar temperature to it. Winter in Gyirong Town and Kathmandu in Nepal is a lot warmer than most summer temperatures in Tibet, thanks to its low altitude, the effects of the Southwest Indian Monsoon, and the barrier of the mountains that stops the colder Northeast Monsoon air from Siberia spreading down from the plateau. Even at its lowest winter temperatures, these two places are warm and comfortable, although rain is also found throughout most of the year in smaller amounts. 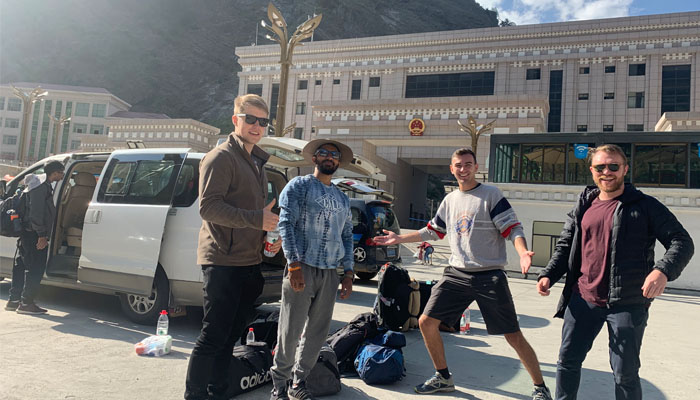 Winter in Gyirong Town is warmer than Tibet

Namtso Lake lies at an altitude of 4,718 meters, and has a colder climate than Lhasa or Shigatse, often seeing snow covering the mountains and the mountain pass to the lake from Damxung County from December to March. The lake is also prone to freezing in the depths of winter, and it can be hard to get there with the roads to the lake blocked for several months. Strong winds vie with strong sunshine to reduce the temperatures, which can drop as low as -10°C during the coldest months of the year.

Ngari lies in the far northwest of Tibet, and is one of the coldest and harshest areas of the region. Temperatures drop well below freezing every night, even in the height of summer, and in the depths of winter, it is almost impossible to travel to the area for the heavy frost and snow that blocks the roads over the mountain passes. Daytime temperatures in winter range from around 1°C to as low as -5°C, with nights dropping as low as -18°C.

Under the brilliant sunshine, our clients are hanging Tibetan prayer flags at Lake Manasarovar

Nyingchi winters are normally a mild affair in the areas that are lower, but on the mountains and slopes, harsh conditions still prevails, especially at the altitudes above 4,500 meters. Snow is a common factor in Nyingchi winters, and can be found across most of the area, except in the lowest valleys. Winter temperatures, however, average from 8°C - 13°C, with even the coldest nights only reaching down to around -4°C at most.

Located in northern Tibet, Nagqu is one of the areas of Tibet that has the worst climate conditions on the plateau. Nagqu experiences a typical sub-arctic climate, with icy-cold winds, lack of oxygen, and vast temperature differences from day to night. The dry arid land become drought-ridden through the winter, and temperatures at night can drop as low as -21°C, with daytime temperatures that barely reach above freezing from December to the end of February.

The prices of hotels and tours are often more economic in winter, and it is easier to book flights and train tickets, as well as get the Tibet Travel Permit. With fewer tourists entering the region in the winter months, it is a great time for touring with less crowds and more time and space to enjoy the various attractions.

Pilgrims are also more prevalent in winter, taking the time to make their long journeys across the plateau to Lhasa, to pray and prostrate in front of the Jokhang Temple and perform the ritual kora around Barkhor Street. Many important festivals fall in winter, such as Tsongkhapa Butter Lamp Festival and Tibetan New Year, making winter a good time to experience more authentic Tibetan culture and traditions.

Aside from Lhasa, tourists can also visit Lake Yamdrok, Nyingchi, and even Everest Base Camp in the winter months, as the well-paved road makes travel easier and much less problematic. Snows are rarely seen on the passes along the Friendship Highway, and the trip is made more pleasant by the clearer skies and amazing winter views.

Winter is a great time to watch black-necked crane and take amazing photos. For those with a love of relaxation,the Terdrom Hot Spring is one of the best places to visit in winter, and the relaxing, healing waters of this ancient spring, located right next to a Buddhist nunnery, are a welcome change from trekking, walking, and climbing everywhere.

The weather in winter is not as cold as many people think, while there are places that are well below freezing in the daytime, most of the major tourist destinations in Tibet are still open for visitors. without the frequent rain, the huge crowds of summer, toursits can have a great time to visit Tibet in winter.