As we all know, April to October is the prime time to visit Tibet because the weather during this period is better, warmer and more pleasant for traveling. Every year, tens of thousands of tourists from all over the world gather in Tibet and visit the attractions from dawn until dark. However, in recent years, the propensity for winter travel to Tibet has increased, more and more of our tourists now choose to travel to the high plateau between November and February. Here are the top 9 reasons why they do so.

Tibet is Not Very Cold in Winter

The winter in Tibet is not as cold as you think. At a latitude of 29° North, Lhasa is a much warmer place to visit than many of the northern cities of China in the winter months, and has become a popular place for winter tours. The temperatures in Lhasa in the winter, from December to February, range from 7°C to 9°C during the daytime, though it can get as low as around -10°C at night. Monthly temperature averages in Lhasa range from 3°C in November to around -1°C in January, the coldest month of the year. 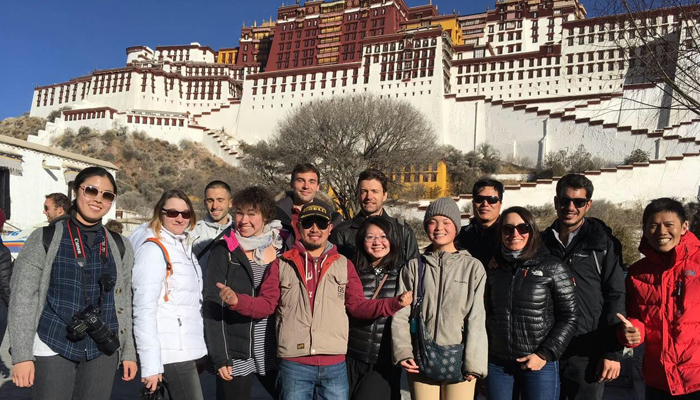 Tibet is also a lot sunnier than many of the areas of China in the winter months, as its high altitude reduces the amount of winter rain and the thinner atmosphere allows the bright sun to warm the plateau more. For the four months from November to February, around 90-95 percent of the days in each month are sunny, with just a few occasional wispy clouds floating across the clear blue skies. And with 8-9 hours of bright sunshine a day, Tibet is a stunning place to be in the winter.

The average hours of daylight on the plateau are also longer in the winter than you might expect. While it may be the winter months, Tibet’s lower latitude compared to many western countries means it has a longer period of daylight than places such as England, France, Germany, and the northern United States. On average, Lhasa sees between 10 and 11 hours of daylight per day from November through February.

The Oxygen Content in Winter is Not Less than Summer

One of the common misconceptions of people outside Tibet is that the oxygen content goes down in the winter. However, this is not strictly true. While the oxygen content in certain areas of the plateau with high density forests can increase slightly in the summer months, this is actually a negligible increase in terms of the entire plateau, and overall, the general oxygen levels in Tibet remain the same throughout the year.

Winter is the Best Season to View Mountains

If you are traveling to Tibet to view the mountains of the Himalayas, which most people do, then you are more likely to get a better view of the peaks of the world's highest mountains in winter than in summer. Summer is the monsoon season in Tibet, besides the damp air which is not good for far-viewing, there is often plenty of cloud cover, which tends to hang around the mountain peaks and cover them from view a lot. 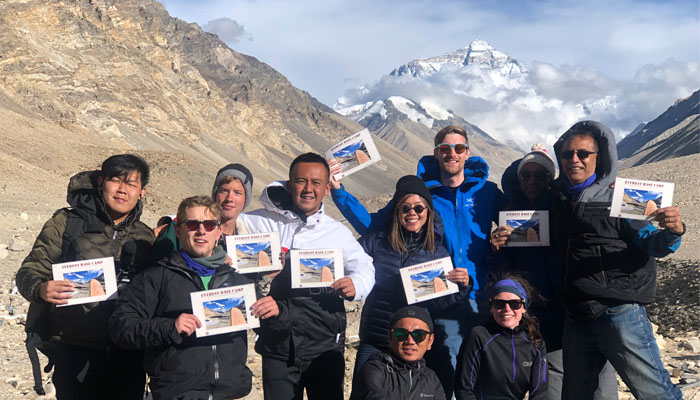 You are more likely to see the mysterious "Flag Clouds" around Mt. Everest in winter

In winter, this is not a problem, as there is almost no rain in Tibet from November to February, hence very few clouds that cover the peaks of the mountains. The air in winter is dry and clean, and increases visibility over long distances as there are also less water droplets in the atmosphere. Views of Mount Everest are almost completely unrestricted. Join our 8 day Lhasa EBC group tour to appreciate the clear view of Mt. Everest summit.

Traveling to Tibet in winter also means fewer tourists, which is a real blessing when traveling to the larger cities such as Lhasa and Shigatse. In the summer months, millions of tourists enter the region and travel to the major tourist attractions, including the Jokhang Temple, Potala Palace, and Barkhor Street, to name a few. However, in the winter, the number of tourists entering the region is lower, which means you can visit the attractions without the crushing crowds of summer, and spend a more relaxing time touring the ancient sites of Tibet. 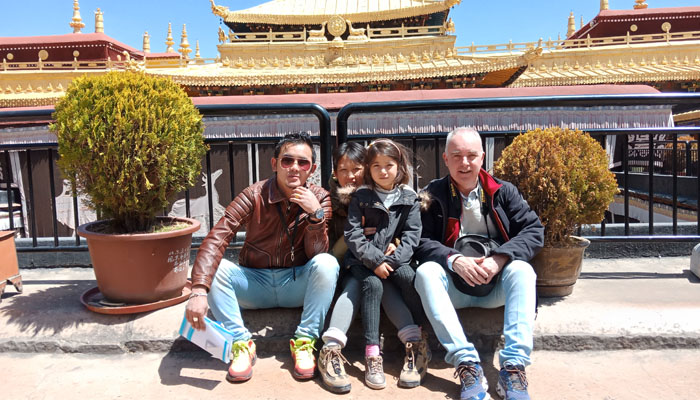 Winter is also a time of pilgrimage for Tibetan Buddhists, who use this quiet time of year to travel across the plateau to the major pilgrimage sites of Tibet, the most popular of which is the City of Lhasa, the Tibetan capital. In the winter, thousands of Tibetans come to Lhasa to pray and prostrate at the gates of the Jokhang Temple, the most sacred temple in Tibet. Having often traveled from remote regions of Tibet, they come also to give offerings inside the temple at the statue of the Jowo Rinpoche, and perform the ritual kora around the temple, which follows the roads of Barkhor Street. For those looking for a more authentic Tibetan experience, there is no better time to come than when the pilgrims are making their pilgrimage to the Jokhang Temple. Join our 4 days Lhasa tour to explore the essence of "City of Sunshine".

Celebrate Festivals with Tibetans in Winter

Tibetans love festivals, and winter is the time of two of the most important festivals in Tibet, Tsongkhapa Butter Lamp Festival and Losar.

Also known as the Gaden Ngachen Chenmo Festival, Tsongkhapa Butter Lamp Festival is an important festival in Tibet, which commemorates the Parinirvana (death) of the founder of the Gelug School of Tibetan Buddhism, Je Tsongkhapa. Held on the 25th day of the 10th month of the Tibetan calendar, the festival is a time when the famous Butter Lamps are lit in reverence of the Buddhist master. 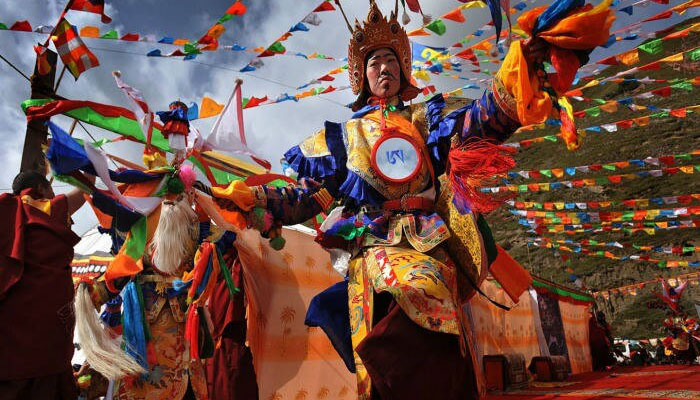 Various activities are held to celebrate the Tibetan New Year

Hot springs can be found in several places on the Tibetan plateau, and there is no better time to dive in to the hot volcanic waters than in the cold winter months. There are actually more than 1,000 hot springs spread across Tibet, with the four most popular ones being Yangpachen hot springs and Terdrom Hot Spring in Lhasa, Xiqian hot springs in Lhatse, and Tirthapuri hot springs near mount Kailash. 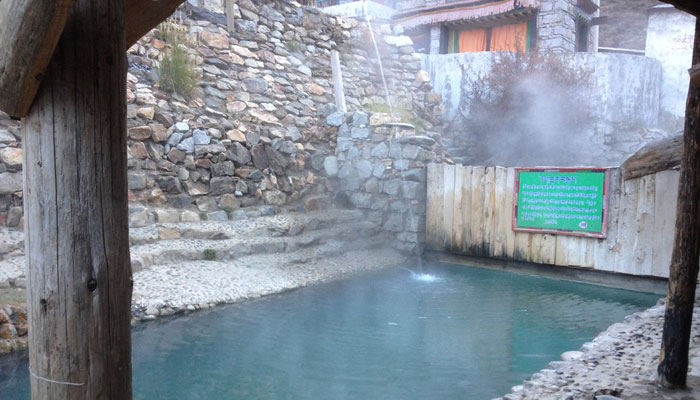 Black-necked cranes are one of the indigenous species of water birds that reside in northern Tibet, in areas where even people will often not live. As an endangered creature in Asia, this magnificent bird can be seen in the more southerly areas of Tibet in the winter months, especially around the Lhasa River, the Lalu Wetlands in western Lhasa, and the Hutoushan Reservoir in Lhünzhub County of Lhasa. These amazing birds migrate south for the winter to their feeding grounds, and are best seen in the morning and evening, as they leave and return from foraging for food. 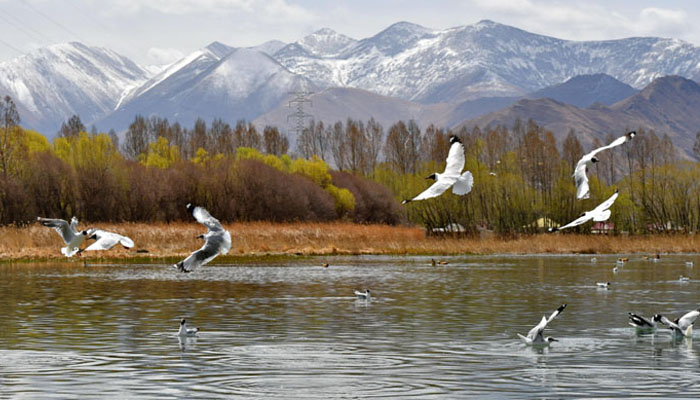 Travel Tibet in a More economical but Comfortable Way in Winter

Travel in Tibet is actually a lot more economical in the winter months, while still being just as comfortable as it is possible to be. Hotels are often a lot cheaper in the winter months, offering reduced rates for rooms to get the business, as there are fewer tourists around looking for accommodation.

Flights are also cheaper in the winter months except for Spring Festival period. Carriers to Lhasa can often offer up to 10 percent off the cost of flights. Train tickets are similarly cheaper in winter, as they drop from the higher inflated prices of summer after the bulk of the tourists are no longer using them. Both kinds of tickets are easier to buy in winter, it is even possible to get the tickets just a week before your trip.

You can also find that the entrance fees to some of the attractions on your tour are reduced, which is a way to attract more visitors in a time when there are fewer people around to visit.

It is More Convenient to Travel Tibet in Winter

Convenience is always a big concern when traveling, and the more convenient it is for something, the better. One thing that is more convenient in winter is the processing period for the Tibet Travel Permit. Processing in the peak season normally takes from 15-20 days, so travelers are required to book far in advance of their trips. In the winter, this is a lot faster, with fewer permits to process in the small office of the Tibet Tourism Bureau in Lhasa. While it is still not “next-day”, it is a much reduced time for processing.

Besides the warm sunlight and clear air, you can visit attractions and celebrate festivals, experience Tibetan hot springs, view black-necked cranes in winter, and enjoy the splendid high plateau scenery leisurely and economically in winter. Contact us to customize your Tibet winter tours now.

0 Comment ON "Top 9 Reasons to Travel Tibet in Winter"