Yamdrok Lake or Namtso Lake: Just Choosing One is Enough for Your Tibet Tour?

Tibet is a land that is filled with lakes, and across the entire region there are hundreds of large and small lakes to see, some more accessible than others. Two of the most popular for tourists, however, are Lake Yamdrok and Lake Namtso. Both of these lakes are holy lakes in Tibet and are known as two of the Great Three Holy Lakes of Tibet, the third being Lake Manasarovar, near the sacred mount Kailash.

Tours of Tibet often include one of these great lakes, and on many tours to the west, a stop by Lake Yamdrok along the way is part and parcel of the tour itinerary, since you will drive right past it heading for Shigatse. The main question is, should you visit both Yamdrok Lake and Namtso Lake, or is one enough for one tour?

The answer to that is simply, NO. These stunning lakes may both be holy lakes, but each has its own unique features and sights and traveling to one does not mean you do not need to see the other. So, if you have time in your Tibet tour, it is a good idea to visit both, since you will then get twice as much pleasure from your trip.

If you are planning on visiting both lakes together on your tour of Tibet, then there is a recommended route that you can take to get the best of both lakes, as well as including all the other amazing and popular sights of the Tibetan plateau. The average trip to cover just the two lakes takes around 6-7 days, although this would be much longer if you are continuing on to other parts of Tibet or overland into Nepal. 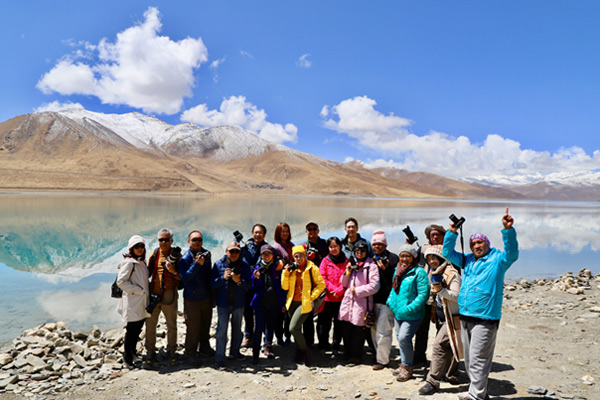 One can visit both Yamdrok and Namtso Lakes togther in one Tibet tour within 6-7 days.

From the start if the tour in Lhasa, it is best to visit Lake Namtso first, as it is a trip to the north and then back to Lhasa, usually done overnight to give you the best experience of the lake. You can also visit the hot springs and geothermal pools at Yangpachen on the way back, which are good for relaxing the body, as well as the soul. After getting back to Lhasa, then you can head out to see Lake Yamdrok, which is on the road to Gyantse.

After visiting Lake Yamdrok, you can choose whether to head back to Lhasa, or continue on to visit Shigatse, Tibet’s second city, and the famous Mount Everest, and even head further into the remote areas of Tibet, to visit the sacred Mount Kailash. You also have the option of traveling onwards to Nepal, to tour Kathmandu after leaving Tibet through the Gyirong Port border crossing with Nepal.

For those that are limited to choosing one or the other due to time restriction, then there are two great choices for tours that are offered, which give you the best of each of the lakes, and include other locations that you can visit along the way.

This six-day Lhasa and surrounding tour takes you to the stunning Lake Namtso, after a two-day stay in Lhasa, acclimatizing and visiting the amazing monasteries, temples, and sights of this City of Sunshine. The highlight of this tour, the visit to Lake Namtso, is a two-day excursion from Lhasa, leaving early in the morning to get the most out of the trip, since it is a 5 to 6-hour drive to the lake. You will stay overnight at the lakeside, where you can watch the sunset over the lake, and see the stars in all their stunning glory. Then, waking early to watch the sun come up over the eastern end of the lake, shining on its surface, you will have most of the day to trek around parts of the lake, visit the monastery on the Tashi Dor peninsula, and explore the area more, before driving back to Lhasa.

The general Lhasa and Yamdrok Lake tour takes about 5 days in total. After the first two days in Lhasa, acclimatizing and seeing the sights of the monasteries, Jokhang temple, and Potala Palace, you will head out overland towards Gyantse, along the S307 Provincial Road, which passes by Lake Yamdrok. The trip takes around 3-4 hours each way, and the first view of the lake comes as you reach the top of the Gampala Pass. As you crest the pass, the lake is laid out before you in the basin below, stretching as far as the eye can see. Surrounded by many snow-covered mountains, in the distance you get a great view of the holy mountain, Mount Nyenchen Khangsar, the closest holy mountain to Lhasa. You will get to drive down to the lakeside and spend the day there, exploring the area and getting photos taken with yaks and Tibetan mastiffs, before heading back to the Tibetan capital for the last night in Tibet.

Lying to the south of Lhasa, Lake Yamdrok is simply one of the most stunning sights you will see in Tibet. The lake covers a huge area of land, with its arms stretching out in all directions. Many say that the lake closely resembles a fan, although in reality, it looks more like a Chinese character, as if someone had written something on the surface of the plateau and it got filled with water.

This stunning lake has water that has a slightly turquoise tinge to it, making it a great lake for photography, as the light shines well off the surface and often causes the water to change color slightly, depending on the angle of the light. The surrounding mountains make a good backdrop for photos, covered in snow and reflected off the lake’s shimmering waters. You can also find many local animals around the lakeshore, such as yaks and Tibetan mastiffs, that are owned by local people and dressed up for tourists to photograph. You can even get a photo while riding on the back of one of the dressed yaks. 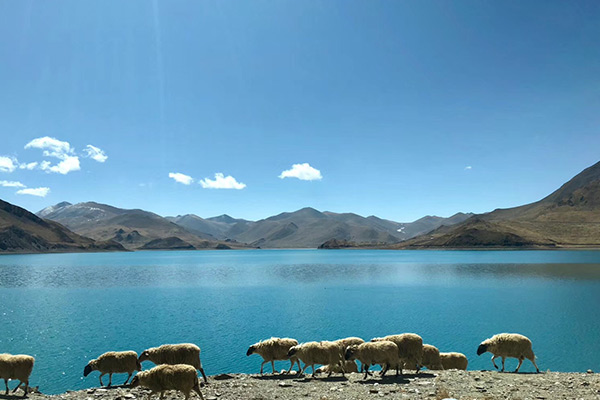 Yamdrok Lake is perfect for photographying for its amazing sight with the surroundings.

Lake Yamdrok also has a number of small islets that are the perfect habitats for many of the migratory birds that travel thousands of miles to Tibet, and in autumn hundreds of thousands of white birds can be seen flocking around the islets and flying over the lake. And, despite Tibetans rarely eating fish, the lake has also become a popular place for fish supply to restaurants in Lhasa. Fish farms have opened up there to provide the restaurants with a steady supply for their foreign guests.

Where is Yamdrok Lake

Lying amongst the mountains that cover the area, Lake Yamdrok lies around 100 kilometers southwest of Lhasa, and about 90 kilometers to the east of Gyantse, the home of the Pelkor Chode Monastery and the giant stupa of the Gyantse Kumbum. Sitting just inside Shannan Prefecture, the lake lies at an altitude of 4,441 meters and is best viewed from the pass just before you get to the road that follows the lakeshore towards Gyantse. To get there, you can take the S307 Provincial Road from either Lhasa or Gyantse, which runs alongside the shore of the lake for many kilometers.

For most people visiting Lake Yamdrok, the best time to travel is from May to June and September to around mid-November. The temperatures are milder than in summer, and much warmer than in winter, and the skies are bright and clear, making for the best photos. While there is very little rain at these times in this part of Tibet, it is best to bring a raincoat just in case, and a warm jacket as it can get colder in the evenings.

Another of the holy lakes of Tibet, Lake Namtso is a saltwater lake, and the largest on the Tibetan plateau. One of the holiest lakes in Tibetan Buddhism, the lake is known as the “Heavenly Lake”, as a direct translation from the original Tibetan name. 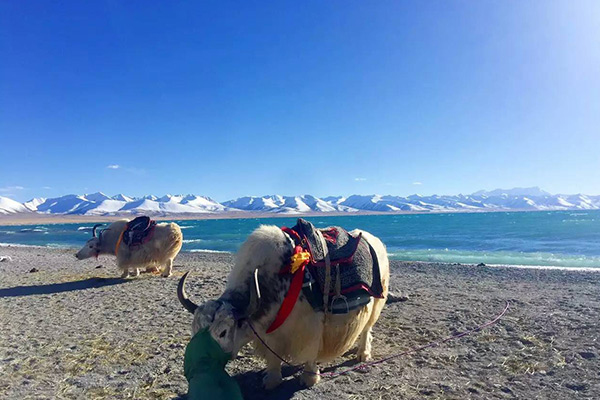 Namtso Lake is a heavenly lake and a great place for trekking around.

One of the traditions of Tibetan Buddhists is to perform the ritual kora around holy and sacred sites, and at Lake Namtso you can often see the pilgrims walking around the lake, often prostrating themselves in worship as they travel. The lake makes a great place to hike or even cycle as well. At around 70km long and 30km wide, the circuit around Lake Namtso takes around 6 days to complete, and many pilgrims do this, carrying everything they need with them. For trekkers, you can trek around the lake, staying at the various campsites and monasteries that offer guesthouses for trekkers and pilgrims. The trek takes you over some high passes and across some of the most beautiful grasslands in Tibet, which are filled with nomadic herders in the summer months.

There are also cycling tours that take you from Lhasa to Lake Namtso and back, circling the lake by bike once you are there. The cycling tours are normally around 6 days long, and the route to the lake is exceptionally beautiful, passing along the famous Qinghai Tibet Highway as you travel north to Damxung County. The route does require a lot of stamina, but is worth it for the amazing views and the ability to stop whenever you feel like it.

Where is Namtso Lake

Lake Namtso lies to the north of Lhasa, and can be reached by driving the 112 kilometers, which takes around 5 hours. The route from Lhasa to Lake Namtso is good, with a well paved road for the whole distance. Following the Qinghai Tibet Highway, it takes you through some beautiful countryside, and alongside the spectacular Nyenchen Tanglha Mountain Range.

The best time to visit the lake is from June to late October, when the weather is at its best. The weather is warmer at that time of year, and while the summer may see rain and cloudy skies at Lake Yamdrok, at Namtso there is less rain in the monsoon season, and the skies are clear for most of the day.

Summer and early autumn are also the best times to camp out at the lakeside, and a great time to view the stunning vista of the stars in the night sky. Nights at Lake Namtso are extremely dark, thanks to very little light pollution from towns and cities, as there are none close by. This gives you a great view of the billions of stars that can be seen in the sky at night, which includes a view of the opposing arm of the Milky Way, our own galaxy. Staying overnight also means you get to see the sunset and sunrise on the lake, which are spectacular and well worth the overnight stay.

The winter months and early spring see the lake covered in ice and often surrounded by snow, making travel from the highway to the lakeshore almost impossible. Oxygen content is higher in the summer in Tibet, and Lake Namtso lies at an average altitude of around 4,718 meters above sea level.

0 Comment ON "Yamdrok Lake or Namtso Lake: Just Choosing One is Enough for Your Tibet Tour?"