What to do in Tibet in 7 Days? Best Itineraries for a One-week Tibet Tour

Seven days is an ideal travel length for first-time travelers to get the best of Tibet, no matter you are interested in historical landmarks, gems of nature, or the Himalayan peaks. How to arrange a one-week trip in Tibet? What is the best itinerary in 7 days in Tibet? Our experiences Tibet local travel experts are going to share the most useful Tibet travel ideas with you to help you arrange your 7-day trip in Tibet.

The 7 days Lhasa to Kathmandu overland tour is the most popular land journey through the Himalaya region from Tibet to Nepal. During this epic overland journey, you will visit monumental landmarks and ancient Buddhist structures like Potala Palace, Jokhang Temple, Tashilunpo Monastery, appreciate the holy Yamdrok Lake and Mount Everest, and experience the local culture in the local towns and villages along the way.

During the first 3 days, you will stay in Lhasa city to get used to the high altitude and explore the holy city. When you arrive in the world's highest capital, rest during the remainder of the day to accommodate to high elevation. Heed recommendations your travel agent gives you to the letter. 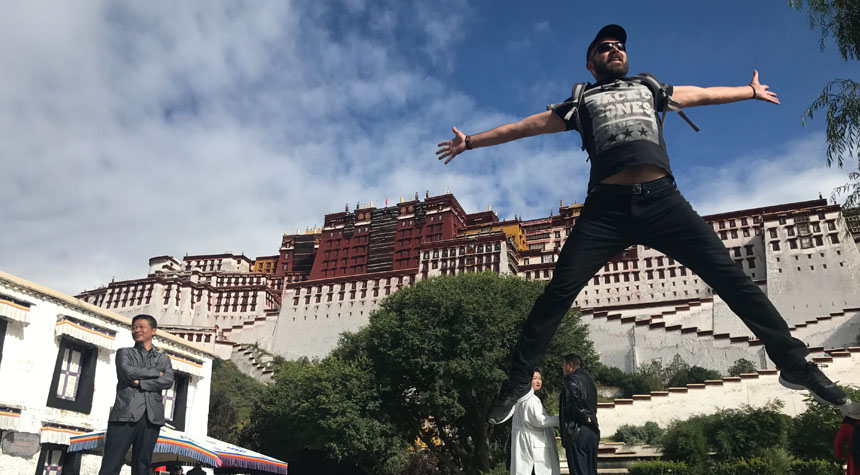 Generally, it takes one day to visit the unmissable attractions in Lhasa, including Potala Palace, Jokhang Temple and Barkhor Street. On the next day, you can visit Drepung Monastery and Sera Monasteries, two of the Three Great Monasteries of Lhasa. Located on the outskirts of Lhasa, Drepung is the largest Tibetan monastery, while Sera is famous for monk debates taking place in the afternoon.

The fourth day of your one-week Tibet-Nepal overland tour sees you on the road to Shigatse, the second-largest city of Tibetan Plateau. Along the way, you will see Yamdrok Lake, one of the holy lakes, Karola Glacier, and Simila Mountain Pass. Gyangtse Fortress and Perklor Monastery are other highlights along the route.

Before going to Everest Base Camp (EBC) on the fifth day, you will visit Tashilhunpo Monastery in Shigatse. There resides Panchen Lama, the second most important spiritual authority of Tibet.

On your way to EBC, you will increase the altitude at a fast pace. From Shigatse, which sits at 3,900m elevation, you will get to the height of 5,200m above sea level when you arrive. Get your cameras ready to take photos of several Himalayan peaks once you reach Kyawula Pass.

Weather permitting, you will enjoy extraordinary views of Mount Everest in the evening on the fifth and around sunrise on the sixth day of your Tibet itinerary. Before proceeding further, visit Rongbuk, the world's highest monastery. 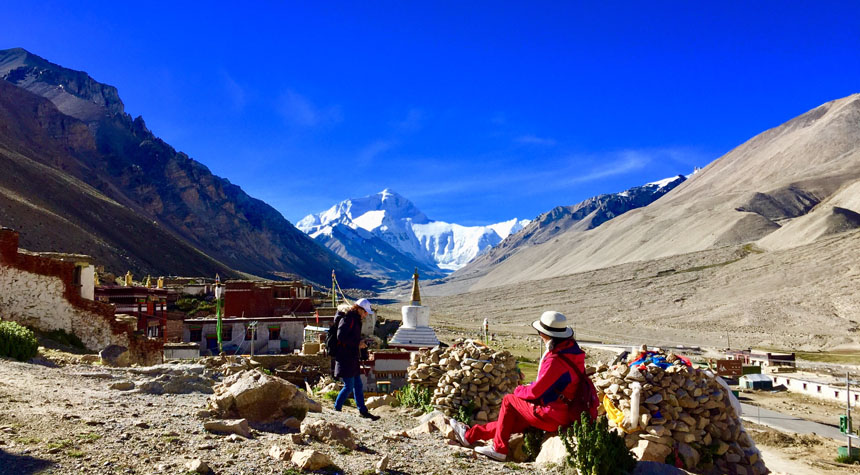 During the remainder of the sixth day, you travel to Gyirong, the last stop of your overland tour in Tibet. From harsh and barren Himalayas, you will get to the lush countryside of Gyirong County. On the last day of your seven-day experience, cross the Chinese-Nepali border, and continue to Kathmandu.

Everest Base Camp, with views of Mount Everest, is the ultimate highlight of this seven-day overland tour of Tibet and the Himalayas. Except in summer (monsoon) months, the chances of seeing the world's highest summit are good. 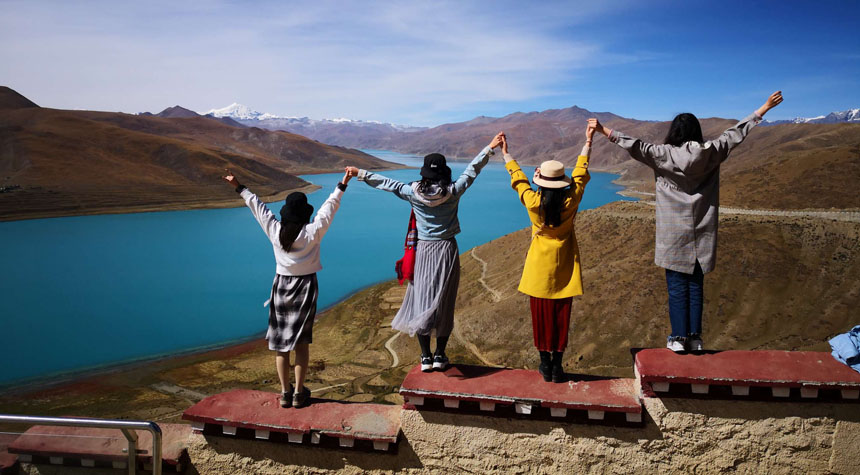 Yamdrok is a scenic lake whose blue waters contrast to brown, green, or white hills, depending on the season. Mountains with snow-covered peaks surround the lake while various birds inhabit its islands.

Shigatse, dominated by Shigatse Dzong reminiscent of Potala Palace in Lhasa, is a sprawling city. Historic Tashilhunpo Monastery is its top attraction, but you may wish to see the nearby summer palace of Panchen Lamas if you have time.

Sino-Nepal Friendship Highway is a modern road connecting the capital cities of Tibet and Nepal. Tibetan section is passable most of the year, traversing plateaux, mountains, and valleys.

Since you will gain in altitude until you get to EBC, please pay attention to suggestions of your tour guide. That way, you will avoid severe altitude sickness symptoms.

To get the Chinese Visa and necessary permits for your seven-day Tibet to Nepal overland tour, you need to apply Tibet Travel Permit in advance. However, you can obtain the Nepal Visa at the Gyirong Port border crossing. To do so, prepare visa photos and cash (about 30 dollars) to pay for visa fees.

If you are a fan of Tibetan culture, 7 days is quite enough for you to experience the culture and the REAL life of the Tibetans in Lhasa and Central Tibet. Also, you will have time to take a train to Tibet through the famous Qinghai-Tibet railway.

Why Central Tibet? It is the Cradle of Tibetan Civilization.

Nowadays, Lhasa acts as a cultural hub of Tibetan Plateau. However, Shigatse and Tsedang played a crucial role in the development of the local culture in the past. 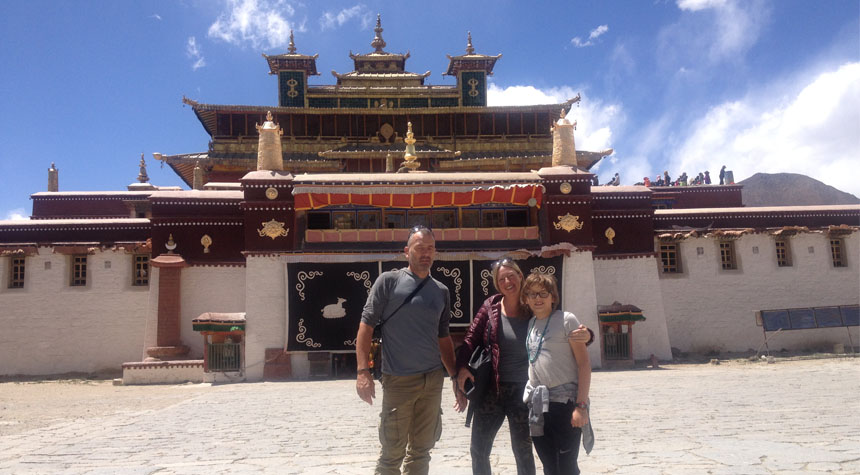 The name of the second-largest Tibetan city means "the fertile land," which underlines its economic and, consequently, cultural importance. Located near Tsedang, Samye Monastery is the first monastery and university of Tibet.

Visit Lhasa and Shigatse in 5 Days

Just like all Tibet tours, the first three days in Tibet are always the time for you to visit Lhasa city and adapt to the high altitude of Tibet plateau. 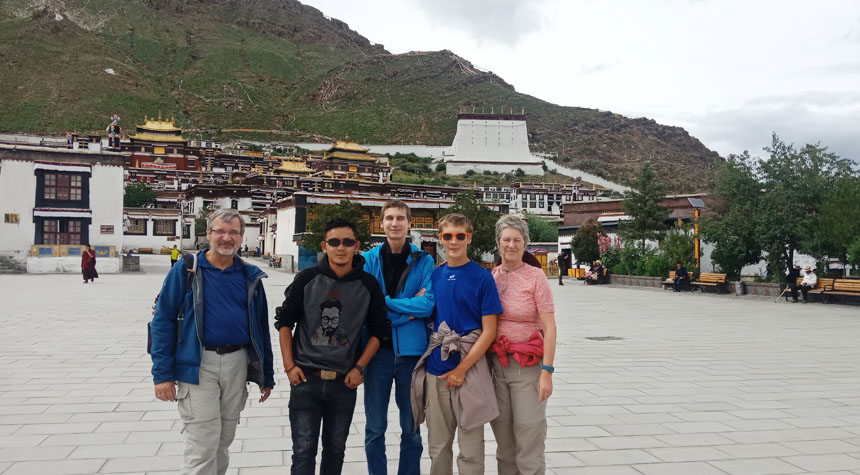 A family tour to visit Tashilhunpo Monastery in Shigatse

On the fourth day, you can hit the road from Lhasa to Shigatse via Gyantse. Along the way, you will see Yamdrok and Manak Dam lakes, Gyantse Town, and Karola Glacier among other attractions. In Shigatse, you will tour Tashilhunpo Monastery, the seat of Panchen Lamas and the main monastery of the Gelug sect of Tibetan Buddhism.

On the fifth day, you will get back to Lhasa. On your way back to the capital of the Roof of the World, you traverse Yalong Valley. The valley abounds with relics of the ancient Tibetan culture, including religious, artistic, and cultural artifacts.

Visit Lhasa and Tsedang in 6 Days

During the first 3 days in Tibet, you will adapt to the altitude difference and visit the main tourist hotspots in and around the capital of Tibet. 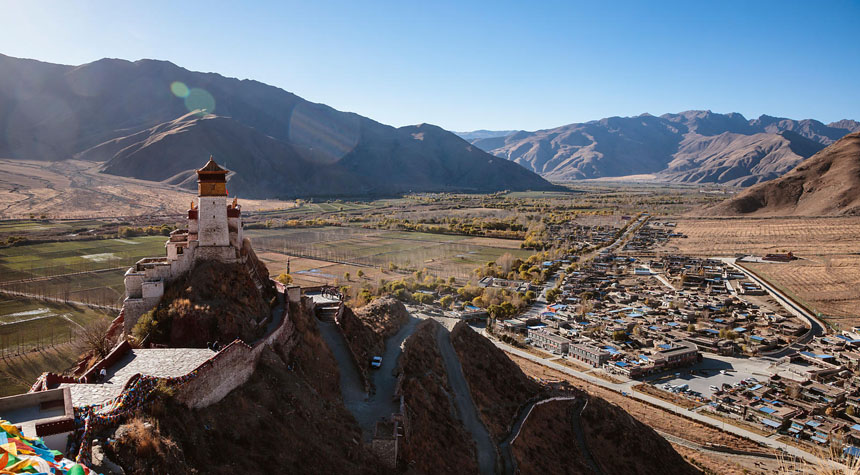 On the morning of the fourth day of your culture tour in Tibet, you will travel to Tsedang. During the day, you will visit Yungbulakang, the palace complex assuming the top of the hill that is the oldest structure in Tibet. Touring of Trandruk, which is one of the oldest Tibetan temples, is also part of the sightseeing itinerary.

Before you return to Lhasa, explore Samye Monastery and appreciate its grand and puzzling design. Use the rest of the day for the Yalong River trek and the journey back to Lhasa, where you conclude the Tibetan cultural experience.

It is highly recommended to take a Xining to Lhasa train before or after your central Tibet culture tour. As the starting point of the Qinghai-Tibet railway, Xining is around 2,275m above sea level, which offers the most frequent trains to Tibet. The 22-hour Tibet train journey covers the most essential parts of the railway to Tibet. If you only have 7 days in Tibet and looking for a chance to get close to the locals, it is the best choice for you.

It is suggested to book Tibet train ticket in advance, especially for summer or Golden Week (October) tours, during which there are lots of domestic travellers taking trains to Tibet. 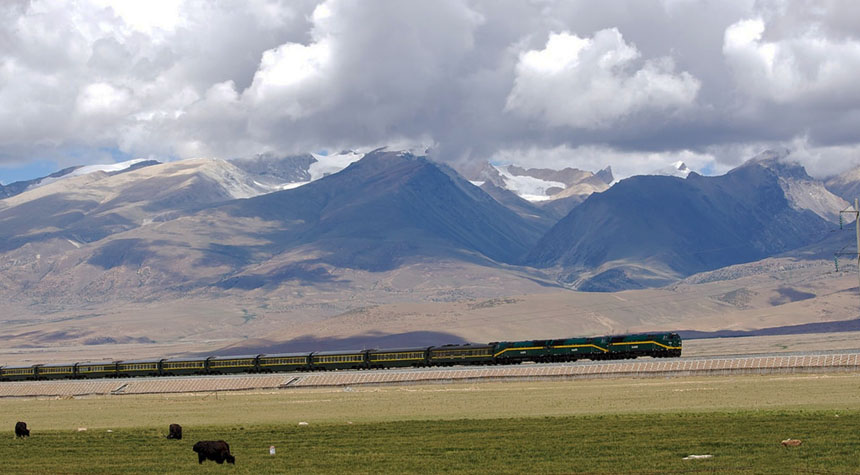 Qinghai-Tibet railway get to Lhasa

When you visit monasteries in Tibet, please walk in the clockwise direction and don't take photos during prayers. Also, be silent, ask for permission to photograph monks, and observe Tibetans if you are unsure what to do.

Up to several hours by car from Lhasa, you will find various natural marvels of Tibet. Sacred lakes of Namtso and Yamdrok and the Nyingchi Prefecture are the crown jewels of Tibet region.

Namtso, also known as "Heavenly Lake," is one of the highest saltwater lakes in the world. Mountains dominate the skyline around the sacred lake, and yaks from nearby pastures come to its shores. Yamdrok is a freshwater lake famous for its beauty and rich fauna (fish and birds). You can appreciate the best of these holy lakes together with the holy city Lhasa in 7 days. 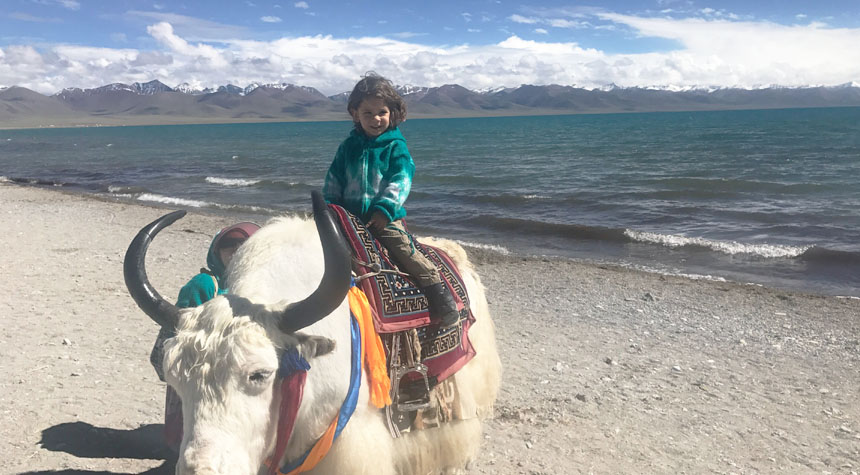 - Day 1 to Day 3: Arrive in Lhasa and visit the best of Lhasa city, like Potala Palace, Jokhang Temple, Barkhor Street, Drepung Monastery and Sera Monastery.
- Day 4: Lhasa to Yamdrok Lake and back to Lhasa
- Day 5: Lhasa to Namtso Lake and stay overnight by Namtso Lake
- Day 6: Back to Lhasa via Yamgpachen
- Day 7: Depart from Lhasa

The 7 days Lhasa and Nyingchi tour is especially rewarding for nature enthusiasts. First, you will spend a few days in Lhasa and visit its top tourist attractions. Former winter (Potala) and summer (Norbulingka) residences of Dalai Lamas, Jokhang Temple, and Drepung Monastery will be some of them. 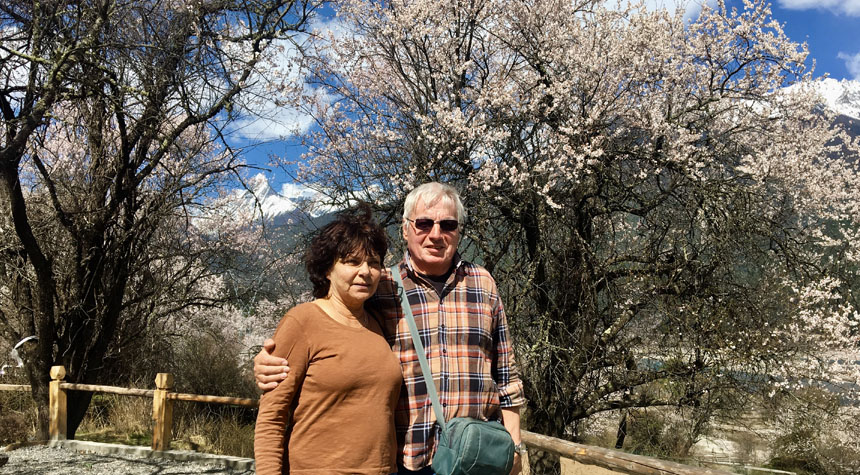 The best time to visit Tibet is from April to May and from September to October. If you want to visit Lhasa and Nyingchi, the eastern Tibet together, it is recommended to travel in early April, during Nyingchi Peach Blossom Festival.

What to Pack for Seven Days in Tibet?

Regardless of the season, you should pack layered clothing for a one-week trip to the Land of Snows. You may have warm weather during the day and low temperatures at night, even in Lhasa, the capital of the autonomous province.

Sunblock, sunglasses, and hats are also mandatory equipment for protection from the sun. Getting sunburns is all too easy in Tibet if you aren't careful. Also, bring medicaments that will ease altitude sickness symptoms, such as nausea and headache.

Conclusion of Spengding 7 Days in Tibet

Every time of the year is OK for a one-week tour of Tibetan Plateau. Albeit the region features "the Land of Snows" epithet, the truth is that most areas are accessible even in winter. Plus, air temperatures are above the freezing point in Lhasa most of the time.

For 7 days in Tibet, you can experience the epic overland journey from Lhasa to Kathmandu through the Mount Everest area, or take an in-depth cultural exploration in Lhasa and central Tibet. Also, you can enjoy the beauty of eastern Tibet in one week. Some short Tibet tours with a Tibet train journey could be a different choice for you. No matter what you are looking for in Tibet, 7 days is absolutely the best travel length for your first Tibet tour.

0 Comment ON "What to do in Tibet in 7 Days? Best Itineraries for a One-week Tibet Tour"