Visiting Tibet as A Foreigner: 7 Things to Help You Quickly Integrate into Local Tibetan Life

Traveling to Tibet is an amazing experience and one that should not be missed. This unique land on the Roof of the World is one of the most alien environments on the planet for most people, and the culture and customs of the Tibetan people are just as unique as their plateau landscape.

Integrating oneself into this unique way of life can be a challenge for most tourists to the region. However, with a few handy hints and tips, you can soon be living “like a local” and enjoying the whole experience more for it.

Greeting people in Tibet is yet another unique custom that is found only in this high region of the world.

The classic Tibetan greeting of “Tashi Delek” is one that you can hear all over the region.

While the direct translation of “Tashi” means “auspicious” and “Delek” means “fine” or “well”, it is usually roughly translated to mean greetings, congratulations, and good luck or good wishes.

It is normally used for first greetings of friends and family, as well as for those visiting the home, and for foreign visitors, is often used in conjunction with the gifting of “hada”, the long white Tibetan scarves. 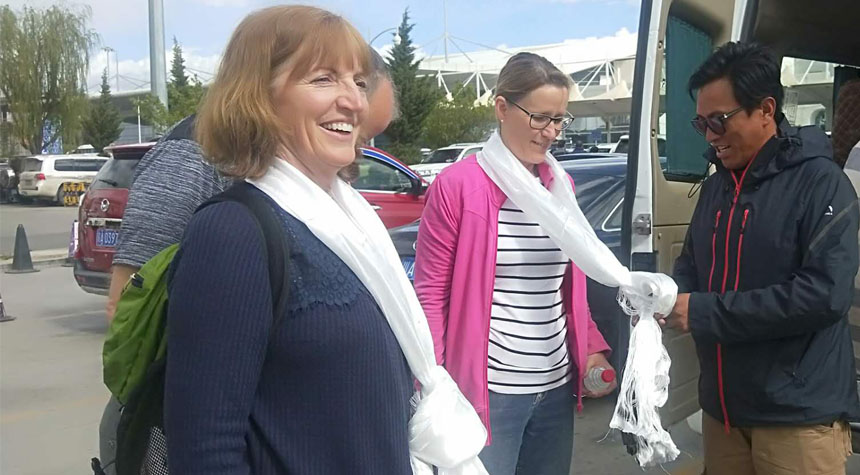 Our Tibetan travel guide greet our customers with a Hada.

The giving of “hada” is another common gesture in Tibet, and they are often given to tourists traveling to Tibet.

The tradition of giving hada dates back a couple of thousand years to the time of the Mongolian king, Kublai Khan, and is given as a traditional way of showing respect and hospitality.

Another common way of greeting in Tibet could be considered rude elsewhere in the world.

Tibetans customarily poke their tongues out when greeting each other, which is not as rude as it may sound.

The reasoning behind this is that in Buddhism, demons typically have a black tongue. Tibetans poke out their tongues when they meet to show that they are not demons.

Dress up in Traditional Tibetan Clothes

Traditionally, Tibetan clothes are normally made from cotton, yak wool, and sheep wool, with some use of silk and satin.

Traditional Tibetan clothes have changed greatly over the centuries, from the original animal skins to more refined and custom-made fabrics. However, the style of clothing has not changed at all, and this unique style of clothing still dominates the highland plateau.

The traditional dress of Tibet is known as the Chupa, and while the name is used for both male and female versions, the styles are very different. 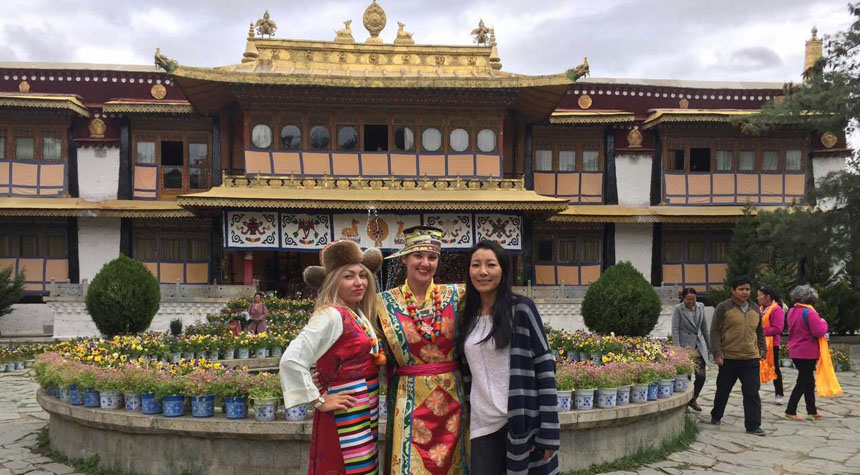 If you are looking for traditional clothes to wear on your Tibet Tour then you can find a variety of shops in Lhasa that both sell and rent these stunning warm garments for tourists.

Most of these clothing shops can be found along Barkhor Street and the area surrounding the Jokhang Temple, and also provide a photo service so you have some memories of your experience of traditional Tibetan dress.

For our clients who want to try Tibetan traditional clothes, we offer a full clothing rental service

For our clients who want to spend their Tibet trip dressed in local clothing, we offer a full clothing rental service, including the clothing rentals, a complete photo and video service for posterity, and all as a part of your complete Tibet tour package.

Tea is the popular drink of Tibet, and whether you like it sweet and milky or salty with butter, you can find hundreds of tea houses in Lhasa and across the region to enjoy a nice cup of Tibetan tea.

Local Tibetans drink tea in much the same way as Americans drink coffee. Tea is drunk throughout the day and is considered to be more than just a refreshing hot drink. And while it may not have originated on the plateau, tea has been adopted as a major part of Tibetan culture. 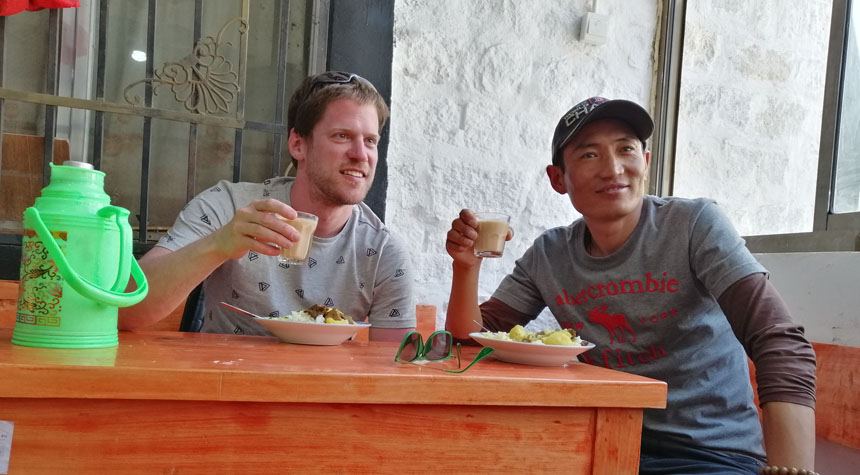 Have a cup of tea in a Tibetan Teahouse in Lhasa

Tibetan Teahouses can be found almost everywhere you go and are just as important in Tibet as the tea itself.

Teahouses are frequented by locals throughout the day, and well into the evening, and are part of the Tibetan culture, almost as much as Buddhism.

Tibetans will gather in teahouses to drink tea, discuss their days, and talk about topics of interest, from politics and religion to harvests, work, and family. They are also a popular place for youngsters to play board games or play “xui”, a traditional dice game in Tibet.

Local Tibetan teahouses also provide a pleasant place to rest for pilgrims, and they can rest and drink tea to prepare for the next leg of their devout pilgrimage.

Lhasa has a huge number of teahouses dotted across the city. You can visit any of the teahouses you find, but the best ones, in our opinions, include the Langsai Antique City, where you can get a good view of the Potala Palace; the Guangming Gangqiongtian Tea House, a popular destination with tea drinkers in Lhasa, and the perfect place to get all the local gossip; and the Cang Gu Si Tian ChaGuan, a teahouse inside a nunnery, which is not large but has an endearing atmosphere and tea made by the local nuns.

Visit Jokhang Temple and Do the Barkhor Kora

Renowned as being the most sacred temple in Tibet, the Jokhang Temple is one of the oldest monasteries in Tibet, dating back to the 7th century.

It was built by the Tibetan king, Songtsen Gampo, as a major Buddhist temple in the new capital of the Tubo Kingdom in what is now Lhasa. 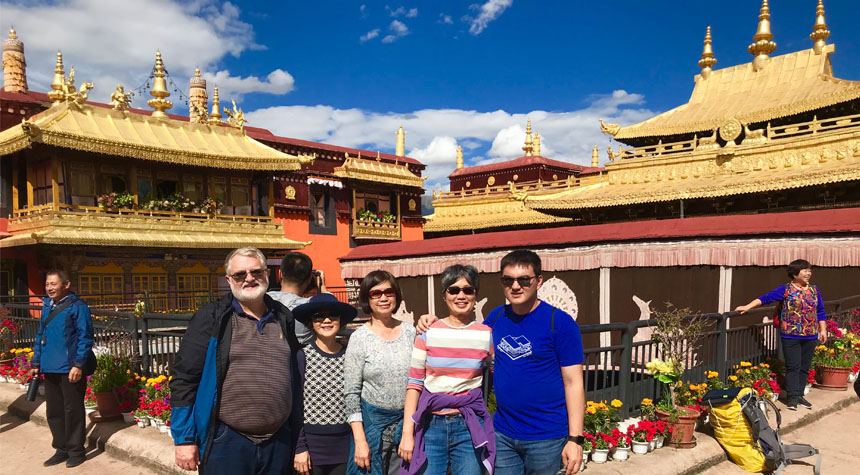 Visit the most sacred Jokhang Temple in Tibet

Originally constructed to hold the state of Buddha brought to Tibet by the king’s Nepali wife, the Jokhang Temple now houses the Jowo Rinpoche, an ancient statue of Buddha at the age of 12, and possibly the oldest remaining statue of Buddha in the world, which is said that the statue was actually blessed by Buddha himself.

The Jokhang Temple is an important part of Tibetan religious culture and is the most revered pilgrimage destination in Tibet.

Thousands of Tibetan pilgrims come to the temple from all across the plateau to prostrate themselves in front of the temple, pray at the statues of Buddha inside, and walk the kora around the temple.

The Jokhang kora is possibly the most important pilgrimage around a man-made structure on the planet, and for Tibetans, it is a journey of enlightenment and merit.

You can join the pilgrims to walk the kora around the temple, following the roads of Barkhor Street as they encircle the temple in a 5-kilometer walk.

The kora is always done in a clockwise direction, as is the way in Tibetan Buddhism, and the route is lined with prayer wheels.

Prayer wheels and prayer flags are an integral part of Tibetan religious culture and can be found all over the region.

Prayer wheels come in a variety of sizes, from the giant wheels you can find in many of the monasteries across Tibet, to the small, hand-held prayer wheels of the pilgrims, which are spun in their hands as they walk their pilgrimage and pray. 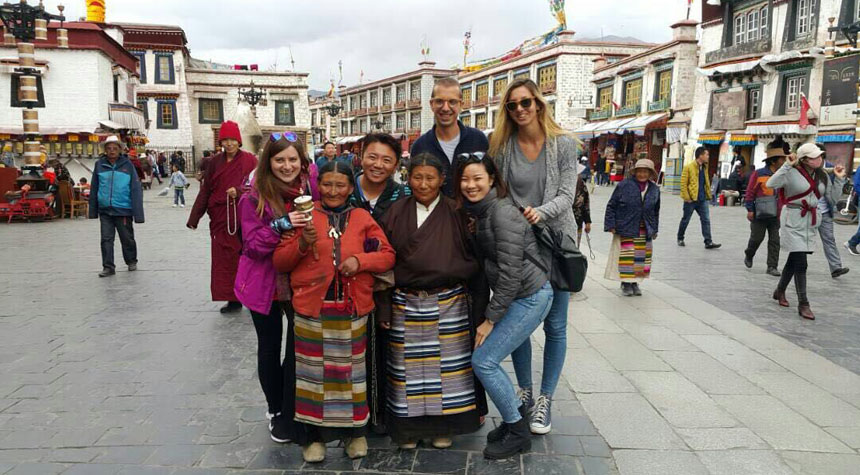 You can find a number of places in Lhasa, around Barkhor Street, where you can buy these beautiful prayer wheels to take home as souvenirs after your Lhasa city tour.

Prayer flags are also a common sight in Tibet and are made of colored cloth with printed prayers, each different color representing a different element in Tibetan Buddhism.

Believed to have originated from the hand of Buddha, who wrote prayers on the battle flags of the devas, they are traditionally hung today to allow the wind to pass the blessings of the prayer on the flags around the entire world.

Join the Guozhuang Dance with the Locals

Guozhuang in Tibet means to sing and dance in a circle, and has its origins in the way ancient Tibetans would sing and dance around the campfires at night, to ward off evil spirits and demons. These forms of dances have been passed on down through history to become the Guozhuang Dance that we know today. 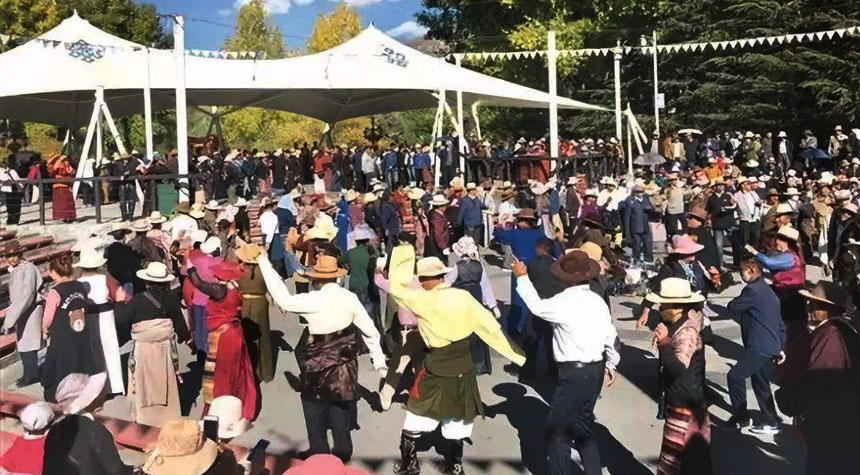 Join the Guozhuang Dance with the locals in Tibet

There are three kinds of Guozhuang Dance – the Temple, Farm, and Pastoral dances – which vary only slightly in their form as the size of the dance gets bigger.

These popular forms of dances are often found in local fairs and folk shows, and can be seen in several of the local parks around the major cities of Tibet in the afternoons.

Popular with locals and tourists alike, they are an integral part of Tibetan customs, and families often take part in the dances together.

Sunny days and Tibet festivals always inspire the local Tibetans to take part in the “linka”, a form of local style picnic. 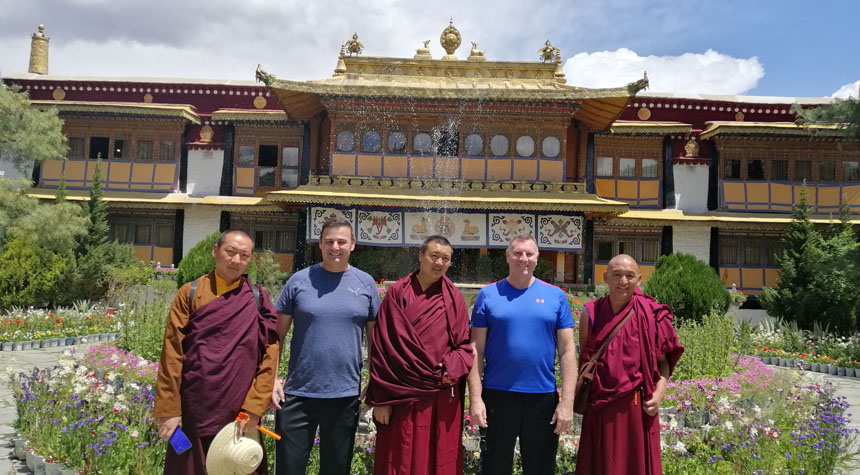 Picnics are a popular pastime in Tibet for families, and it is common to see families gathering in the parks and on the riverbanks to enjoy the nature and spend time with one another.

A custom that is very family-oriented, linka are often held in the parks in Lhasa, and the famous Linka Festival is held every year in the beautiful gardens of Norbulingka, the summer palace of the Dalai Lama.

While you may be foreign to the region of Tibet and the plateau itself, it does not mean that you cannot enjoy life there the same way as the locals do.

A tour of Tibet is not all cameras and palaces and museums, and if you stop for just a minute and take a moment to appreciate the beauty of Tibet, you will find your experience heightened.

Touring around the region like a local is possible, and with a few small changes to the normal itinerary, you can enjoy all the things the local people in Tibet enjoy, including drinking tea whenever you want.

0 Comment ON "Visiting Tibet as A Foreigner: 7 Things to Help You Quickly Integrate into Local Tibetan Life"