Is it Too Cold to Visit Tibet in Winter?

Tibet is a land of mystery and myth, and one of those myths is that Tibet is too cold to visit Tibet in winter. While there may be some areas of Tibet that experience arctic-like weather, there are also many areas that have a more normal winter, similar to some of the northern areas of Europe and Canada. Tibet is often referred to as “The Land of Snows” and the “Third Pole”, but that does not mean it is completely uninhabitable during winter. After all, the Tibetan people live there all year round.

Admittedly, Tibet does experience cold weather in the winter, and even in the mildest places during winter, nighttime temperatures can reach well below freezing. And there are also places where the summer temperature drops to around freezing at night. Just as if you were going skiing in Switzerland in January, having the right equipment and clothing is all part and parcel of a winter trip to Tibet. With the right clothes and gear, you can really enjoy Tibet in the winter, and not feel as if you were on an expedition to the South Pole.

Winter Temperature and Climate in Tibet

The temperature and weather of Tibet in the winter varies from area to area, as the irregular geography of the region has a major effect on the climate. In the southeast of the region, the winter is mild in majority of the area, especially in the lower-lying valleys, and there is little chance of snow, with temperatures of around 10-15 degrees. The heights of the mountains can see heavy snow, and can be quite cold, but this is down to the altitude of the peaks rather than the fact that it is winter.

In the far northwest and north of Tibet, it can get very cold in winter, and the weather is harsher than in other areas of Tibet, with more snow than anywhere else. Temperatures are low, averaging around 3-5 degrees during the daytime, and dropping to around minus 15 at night. However, these areas are the ones that are less visited by tourists, and the indigenous population is spread fairly thin.

In the central and western regions of Tibet, the winter is less harsh than most people think, and it is even possible to visit the border areas with Nepal in the winter without too much trouble. There can be snow on the ground in Late December and January in the western areas, but it is not heavy and can still be traveled across to get to the border and to places like Mount Everest. Temperatures are low at night, reaching minus 10-15 degrees, but during the daytime, the temperatures reach the same levels on the other side of zero, and winter days can be as warm as 12-13 degrees. The clear skies and thinner atmosphere allow the sun to shine through stronger, and this gives a warmer temperature during the day, with a massive difference in temperatures at night.

At an altitude of 3,656 meters above sea level, Lhasa is not the highest point in Tibet, but it is high enough to make it relatively cold in the winter, especially at night. Located in the eastern part of the country, where the winters are milder, Lhasa only has snow on rare occasions in winter, and for most of the year, the climate is amicable and comfortable for foreign tourists. Temperatures in Lhasa during the winter months can get as low as minus ten degrees at night, but conversely, the daytime temperatures can be just as warm, reaching a balmy 8-10 degrees in the daytime in January, the coldest month of the year. 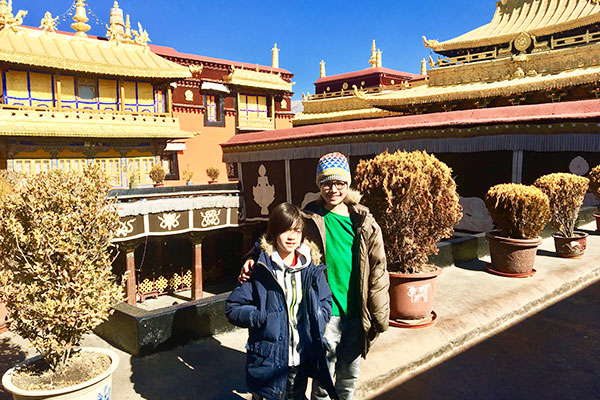 There is very little rainfall in Lhasa during the winter, and in fact the sunshine prevails throughout much of the year, with majority of the year’s rain falling in July and August. The winter sun is warming, and can make it feel a lot warmer than it really is. With a thin atmosphere, the sun’s UV radiation gets through more, making the sunshine stronger, but head into the shade, and you will feel the chill of the real temperature, as the atmosphere neither blocks nor holds in the heat of the sun.

Lhasa is an amazing place to visit in winter, made even more delightful for the fewer tourists that take the risk of a tour in the winter months. Unlike in the summer, the city is less busy, with fewer tourists crowding into the temples and monasteries, and an easier walk around places like the Potala Palace. There are also other benefits to take a Lhasa tour in winter. Hotels, guest houses, attractions, and even the trains, have a drop in prices during the winter months, much the same as you will see in most other countries with a tourism industry. Winter is the low season, and many places have lower prices to attract the few people that are still visiting.

Visit Everest Base Camp in Winter

Everest Base Camp (EBC) in Tibet is the northern of the two base camps, the southern one being in Nepal. At an altitude of 5,200 meters, the base camp has a perfect view of the peak of the mountain, and is one of the most popular places for tourists to visit in Tibet. While summer is not a good time to visit, due to the cloud cover that obscures the summit of the mountain, the rest of the year is almost perfect for visiting, even the winter months. The clear skies and bright sunshine make for some great photos, and an amazing experience. 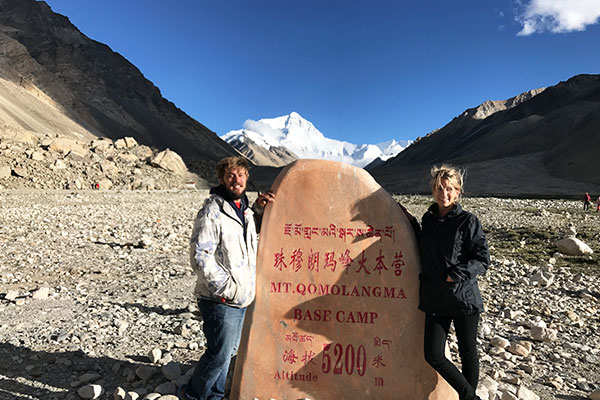 Visit Everest Base Camp in Winter

Many people tend to travel to Tibet for Mount Everest in the spring and autumn months, but one of the best times of the year to visit Everest Base Camp is during the early part of winter. November and December in EBC is a time when there is little chance of snow, and there are less people as well. The temperature is starting to drop a little, but the bright sunshine makes it feel warm enough, and the added benefit of things being cheaper without the intense cold is ideal for an adventurous tourist.

Why Can't You Visit Lake Namtso in Winter?

Due to the heavy snowfalls and icy roads in the mountain areas along the way, the trip from Lhasa to Lake Namtso may be closed in winter. Lying hundreds of kilometers north of Lhasa, the journey to the lake was along the Qinghai Tibet Highway, which previously was not the best stretch of road in Tibet. And at an altitude of 4,718 meters above sea level, the lake is prone to extremes of temperatures, especially at night. The winter cold and frequent snow can also leave the lake frozen throughout the winter months, though this is indeed an amazing sight to see.

Traveling to Tibet in winter is a great idea for tourists, and there are huge benefits to traveling in winter in Tibet. And with a little care in your packing, you could soon be enjoying the delights of a Tibetan winter, and exploring the Tibetan plateau at one of the most beautiful times of year.

Winter is a time of less tourists, which means the areas you visit are not crowded, and often the entrance fees are greatly reduced for those places, sometimes by as much as fifty percent. Hotels and tours also cost less in winter, yet you get the same great service and reliability for the lower cost as those that travel in the more expensive summer period.

Traveling to the plateau is also much easier in the winter months, with fewer people taking flights and riding the trains to Tibet, which means tickets often can be bought without pre-booking them months in advance. Flights and trains still run throughout the winter months, and there is the added advantage that, with less people applying for permits to visit Tibet, the processing time can be as short as under 10 days.

While the foreign visitors to the Jokhang Temple have all disappeared, and many people think it is too cold to visit, the pilgrims from all across the region are descending on Lhasa to pray at the temple and walk the kora route around it. As winter is the time of no harvests and little farm work, devout Buddhist pilgrims from all over Tibet make the long journey to Lhasa to prostrate themselves before the sacred Jokhang Temple, which is an absolutely amazing sight to see.

While there is no doubt it is colder in Tibet in winter, it is not so cold that you would need arctic survival gear to stay warm. Simpler methods of staying warm in winter include having multiple layers, which trap the body heat better keeping you warmer and a good insulated head covering to reduce heat loss through the top of the head, the point of maximum heat loss in people as there is no fat layer to keep the heat in. Extremities should also be kept warmer too, so good thick socks and boots and a good pair of thermal gloves is necessary. With these few things, you can manage to stay as warm as you like, without the need for looking like you are about to climb Everest!

0 Comment ON "Is it Too Cold to Visit Tibet in Winter?"