Tibet lies on the roof of the world, on the highest plateau in the world with an average elevation above 4,500 meters. On this high-altitude plateau, tourism has fast become one of the major industries, and hundreds of thousands of people now visit this largest region of China every year. And while the peak season for tourism in Tibet is in the summer months from June to August, by the time September arrives, the multitudes of Chinese tourists are long gone, and the region is the ideal place to travel to for an autumn break.

After the rainy season has gone, and the weather has once again become clear and a bright, comes the autumn season in Tibet, one of the best seasons to visit Tibet of the year for many foreign tourists. Autumn in Tibet normally runs from Septa tour are in September and October, when the weather is still warm and the skies are clear with very little rain. Often considered to be a “shoulder” season for Tibetan tourism, autumn is one of the best times of the year to visit Tibet, and the sights of the plateau landscape covered in dying leaves and a carpet of autumn-hued color are something you should not miss.

September is the start of autumn in Tibet, and the time when the monsoon rains relinquish their hold on the region in favor of warm, yet dry weather. In the outlying regions of Tibet, to the west and north, September is an ideal time to visit Tibet, as there is very little rain, yet the weather is still warm enough to not need to much warm clothing. The dry air is coming down from the northeast, bringing with it the start of the colder air from northern Europe and the far north of Asia and the Russian steppes. 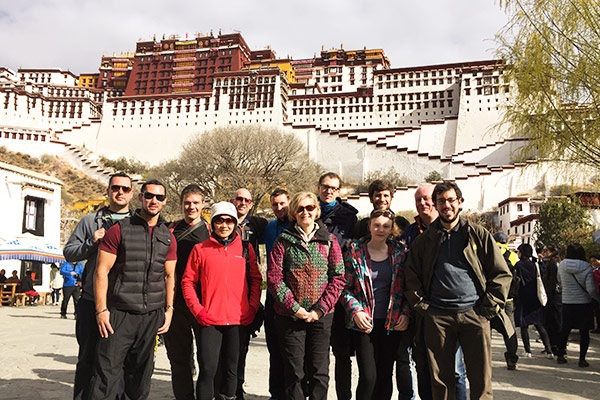 In Lhasa, one of the lower altitude areas of Tibet, the weather is balmy, with temperatures averaging around 20 degrees during the daytime, and dropping to just 6 degrees at night. Maximum temperatures can actually reach as high as 23-25 degrees in the heat of the autumn sun, as it burns through the thin atmosphere.

Out in the west, around the areas of Everest and Mount Kailash, the few rains there are have subsided, and the treks and hiking trails are open again, allowing tourists to once more trek the routes from Old Tingri to Everest Base Camp (EBC) and walk the route of the kora around Mount Kailash. The autumn weather means the trees in the valleys and on the hillsides are shedding their leaves, covering the ground with a carpet of burnished orange and brown.

As October comes around the trees are starting to look bare across the plateau, as they prepare for their winter hibernation, and the weather of Tibet is starting to cool down more, with average temperatures across the region reaching just 17 degrees, and with the nighttime low getting down to 2 degrees in the eastern areas and below freezing in the west.

In Lhasa, while the temperature is starting to drop, the weather is still mild enough to be comfortable, with maximum highs of around 19 degrees, and only a few days of rain in total throughout the month. Days are generally sunny and bright, and warm enough to allow tourists in the region’s capital to wear t-shirts and light pants without the need for thermals.

Further afield, in the areas around Shigatse and Mount Everest, the weather is starting to get colder, although it is still not too cold to trek around the region. The base camp is dry and sunny all day, with clear views of the mountain’s famous peak, and is a great time for photographs of the world’s highest mountain. Mount Kailash tours are still ongoing, and while the trek around the kora route is still possible, it is getting harder as the colder weather starts to creep in. Temperatures in the area drop to below freezing at night in the area of the sacred mountain, and the pass at Dolma La is windy and frigid with the incoming air from the north.

Autumn is a lovely time of year in all kinds of areas that have a four-season climate, and in Tibet it is no different, with possibly the exception of the colder weather. Leaves turning to red and orange and brown on the trees and then falling to cover the ground in a delightful pastel blanket is an amazing sight, and one of the many wonders of nature’s cycle of life. In Tibet, touring in the autumn is one of the most spectacular times of the year, and is especially good for the amateur photographer in all of us, for those once-in-a-lifetime shots.

Autumn actually sees the largest inflow of tourists to Lhasa itself, for both locals and foreigners alike. The forests that surround the river valley in which the city lies are turning brown and the leaves are falling to the ground, making the scene one of the most beautiful in the entire year. The weather in Lhasa is cool enough to not get too hot, but warm enough to not need too much clothing, except at night and in the early morning, although it is still not as cold as the spring and winter nights. 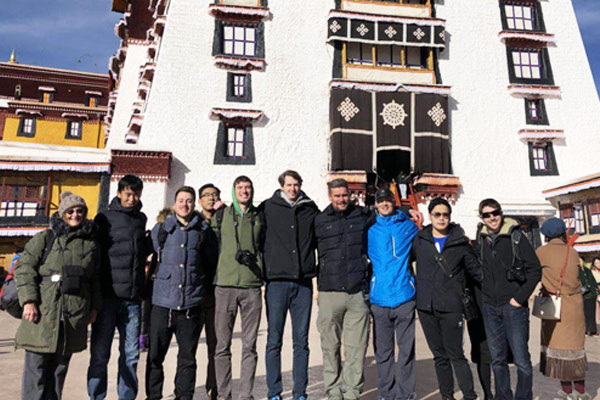 Tickets for the flights and trains to Tibet should be pre-booked at this time of year, as the busy period tends to be sold out fast and hotels and guesthouses can also be filled very quickly with the large number of tourists. There is also nothing that you cannot do or see in Lhasa in the autumn, and every attraction is open, although often filled to the brim with tourists.

Everest Base Camp tour from Lhasa via Shigatse

Extending your Lhasa tour to other areas of the region is ideal for the autumn season, as the weather is still warm enough to make the trip, but not too hot, humid or wet to make it uncomfortable. Hiking tours from Tingri to EBC are a popular activity at this time of year, and the highway from Lhasa to Shigatse and beyond is often flowing with plenty of traffic, despite it being such a long road. 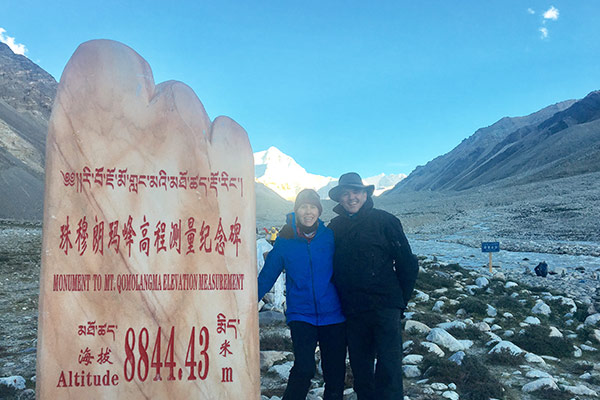 Autumn is ideal to take an Everest Base Camp tour.

Touring out to EBC from Lhasa takes you past the holy Lake Yamdrok, one of the Great Three lakes of Tibet, and through Gyantse, with its famous Kumbum stupa standing tall in the middle of the city. From Shigatse, it is just a short drive to Old Tingri, the gateway to the Mount Everest region, and a stop at the highest monastery in the world, Rongbuk Monastery gives you the perfect preview of Mount Everest before you head to the base camp to get the best photos of your life.

The Mount Kailash tour is one of the most stunning and spiritual tours you can take in Tibet. Lying far out in the northwest of Tibet, in the remote Ngari Prefecture, the sacred mountain stands tall above its companions in the Gangdise Mountain Range of the Transhimalaya.

The kora route itself is one of the best treks in Tibet, and in the autumn it is made even better by the changing colors of the landscape as the trees prepare themselves for their winter hibernation. The weather is a little cold in this remote part of Tibet, but for those trekking around the mountain on the same route used by devout pilgrims from all around the world, you will hardly notice the cooler weather while trekking along the arduous trail. 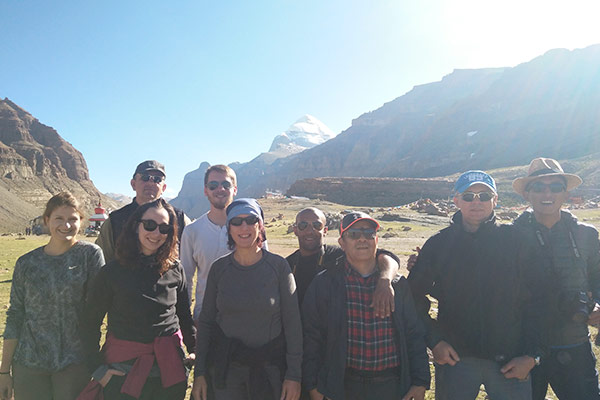 This three-day trek is one of the hardest in Tibet, and reaches an altitude of over 5,000 meters at its highest point, the Dolma-La Pass, which you will climb up to on your second day of trekking, and where the views of the surrounding area are awe-inspiring and breathtaking. After the pass, it is down to the lush green valley for the last stretches of the trek, following beautiful flowing rivers that meander along the valley without a care in the world, much as you will feel as you walk beside them.

Trekking the Kailash kora is not just a hike through gorgeous landscapes, it is also a spiritual journey, even for those that are not religious. Mount Kailash is a sacred mountain in four religions in Asia, and for the Hindus, Buddhists, Jains, and Bons that come to visit this sacred place, it is considered to be the center of the universe and the home of the mightiest of the gods. Even though you may not share the beliefs of the pilgrims you see along the trail, you can almost feel the aura of importance that the mountain holds to them in their prayers and prostrations as they make their way slowly or very quickly around the sacred mountain in their quest for enlightenment.

Travel Tips for Visiting Tibet in September and October

While the weather in autumn is relatively mild for the high altitudes of the plateau, the temperature difference between day and night is high, and you may need warmer clothes at night and in the early morning.

The sun is still strong in the autumn weather, and can burn you unlike you have ever known in any other autumn climate. Care should be taken to use sun cream and a hat when out in the fierce, high-altitude sunlight.

The weather is dry and chaffing in the autumn, with winds that can damage lips and skin. Use moisturizers to keep your hands and face from getting chaffed, and lip balm for chapped lips.

If you are traveling to the more outlying areas such as Nagqu and Ngari, then a good down jacket might come in handy for times when you are not on the move. When you stop, the chill can take over quite quickly.

If you are traveling in September and the beginning of October, it is best to book travel tickets well in advance, as the start of October is National Day in China, and there are thousands of Chinese tourists that travel to Tibet for the week-long holiday.