Trekking in Tibet is one of the most enjoyable ways to discover more about the landscape, the scenery, and the culture of this high-altitude plateau. From the mountain trails that cross high passes and dip into deep, lush valleys, to the sacred pilgrimage routes of the Tibetan Buddhists, there are many places to trek in Tibet.

From the most leisurely trek around the Tibetan regional capital to the toughest trek on the plateau, there are a wide variety of treks covering all experience levels that can make your trekking holiday in Tibet the experience of a lifetime.

From April to May and from September to November is always best time for Tibet trekking, no matter where in the world you go, and in Tibet this is normally in the spring and autumn. Spring, which runs from April to the end of May, is one of the loveliest times of year in Tibet, with spring blooms opening up across the plateau and the fresh clean air giving you a feeling of revitalization. Autumn, from September to November, is another great time, and is often the most popular, due to the falling leaves. As the year heads towards the end, the leaves on the deciduous trees turn yellow, then red, and finally brown, falling to the ground and covering the forest floors with a carpet of color.

Weather Condition of Tibet in Spring and Autumn

Tibet has a unique weather condition, which can change a little from one end of the region to the other. However, across the region, the spring and autumn seasons are the best for trekking in Tibet. Spring is the time of new growth and increasingly warmer weather, and while it is much warmer during the daytime, it can get cold at night. Daytime temperatures in may can even reach as high as 12 degrees, with temperatures at night dropping to a little below freezing.

From September to November in Tibet is the autumn season, when the leaves start to turn to reds and yellows and fall off the trees. A classic scene for those that love the autumn, the forested areas of the plateau are especially beautiful at this time of year. Feeling a little like a fairytale world, the sunny weather and lush green plains make for a great time for trekking in Tibet. Temperatures range from 8-10 degrees in September to as low as 2-3 degrees in November, although the warm sunshine makes it feel less cold. Nights can get much colder at this time of year, with the nighttime temperature dropping well below zero in much of the plateau by the end of October.

Everest Base Camp is the one place that most people visiting Tibet want to head to, and for those that want to trek there, as many people do in Nepal, there is a nice four-day trek from Old Tingri that gives you a stunning experience of the Tibetan landscape and scenery around the Everest National Park. 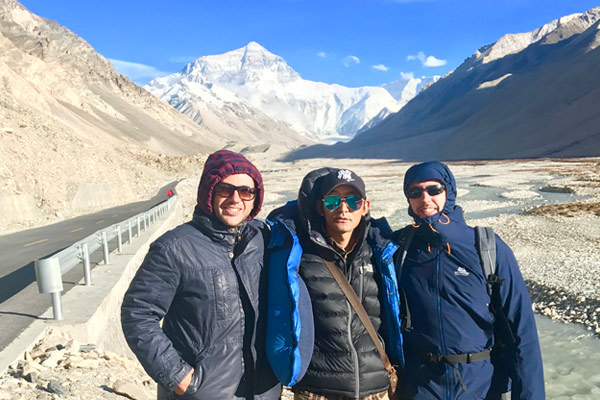 Autumn and Spring are good seasons for a nice Everest Base Camp trek tour.

Covering a distance of 70 kilometers, this average trek takes you across the stunning countryside that surrounds Mount Everest, through spectacular river valleys and over high passes that exceed 5,000 meters. The route covers a variety of terrain, from the relaxing trek through the gently descending river valleys to the hard climbs up to some of the high passes. Nights are spent camping in tents, so it is a good idea to have a good arctic-rated sleeping bag as it can still get quite chilly at night.

Mount Kailash, in Ngari Prefecture of Tibet, is one of the most popular places for people that want to trek in Tibet. While the trekking route is only 52 kilometers long and takes just three days, the climbs to the top of the passes are very hard, and at altitudes that are not found elsewhere in Tibetan trekking. The trekking route follows the route of the ritual kora performed by Tibetan pilgrims around the mountain itself and is one of the most spiritual experiences in Asia. 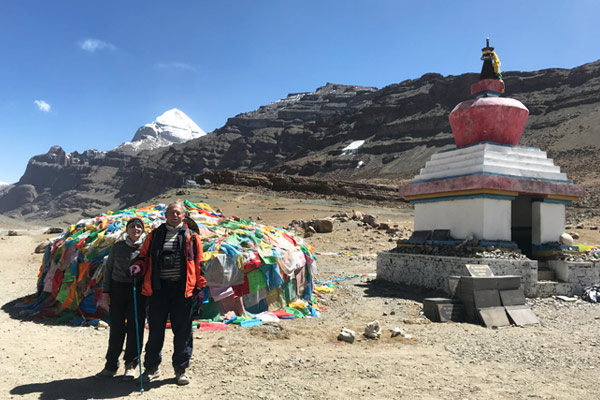 The 3-day Kailash kora can be done during April to May and September to November.

Starting at the small village of Darchen, the trek takes you along stunning valleys to ancient Buddhist monasteries that lie around the mountain. The highest and hardest climb is that of the Dolma La pass, which takes you up to an elevation of 5,630 meters. The view from the pass is one of the most amazing in Tibet, and the top of the pass is covered with prayer flags where pilgrims have left them for additional merits and to pass their prayer blessings to the rest of the world from this highly auspicious place. Most trekkers get to stay in the monastery guesthouses for the two nights, though you should be prepared to camp out if the monasteries are full.

Trekking in Tibet in Summer (June to August)

Summer in Tibet is the monsoon period, and while this is normally a time of heavy rains and sudden downpours across most of Asia, in Tibet it merely means there might be some rain in the evenings and overnight. However, while the rain may not be as bad as in some lowland areas of Asia, it can cause some severe problems in certain parts of Tibet, with mudslides being a major possibility.

Weather Condition of Tibet in Summer

The summer months are from June to August, and the bulk of the rain normally falls from mid-July to the end of August. However, in the far west of the region, there is very little rain at all, thanks to the shadow effect caused by the high mountains that border with Nepal. Most of the rain is found in the southeast of Tibet, where the altitudes are lower and the mountains do not protect the land as much.

The weather of Tibet during the summer is warm and pleasant and can even get quite hot in the southeast of the region, especially around Lhasa and Nyingchi. The air has a higher oxygen content in the summer months, which makes it easier to acclimatize. In those places that do have monsoon rains, the majority only come in at night or in the late afternoon and evening, leaving the days free to explore the beauty of Tibet in Summer.

Mount Kailash trek around the pilgrim’s kora route is one of the best treks in Tibet, and one which can be done just as well in summer as in spring and autumn. Starting at the small town of Darchen, this three-day trek covers a total distance of just 52 kilometers but is one of the toughest treks on the plateau. The first day and a half of the trekking is mostly ascending, with small descents as you pass through valleys until you get to the highest point of the trek. 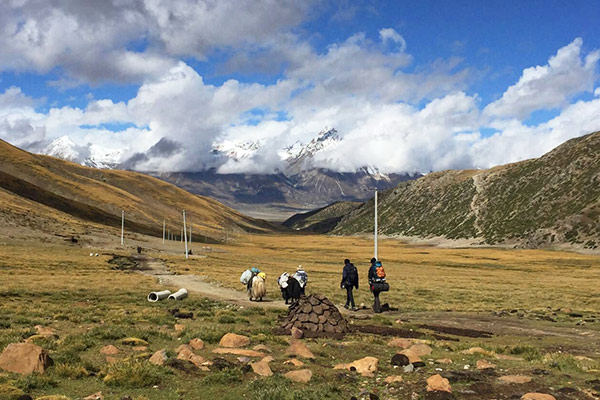 A short trek from Tsurphu to Yangpachen is perefect in summertime.

For those that do not want to head out to the higher altitudes of Mount Everest and Mount Kailash for trekking, there are some amazing sights to be seen on a short trek around the area of Lhasa. The popular short trek around Lhasa include the trek from Tsurohu to Yangpachen, the classic Ganden to Samye trek, the trek from Nyenchen Tanglha to Lake Namtso, and so on. Please feel free to contact us and tell us your interests, our experienced travel consultant will help you arrange your own trekking tour in Tibet to experience the best of Tibet in summer.

Trekking in Tibet in Winter (December to February)

Winter in Tibet is not really as cold as many people think. Despite the region being on the highest plateau in the world and close to the Himalayas, the winter climate in Tibet can be mild enough in December and January to allow tours and even treks in some places.

Weather Condition of Tibet in Winter

Winter is a predominantly dry period on the plateau, with colder weather than in spring and autumn, which can get as low as freezing during the day in some western parts of the region. Nighttime temperatures in February are the coldest of the year, and touring is not the best option at this time, although for foreign tourists the region is closed for February and March.

In the east of the region, around Lhasa and Nyingchi, the winters are milder, with daytime temperatures of around 6-8 degrees, which seem warmer with the bright sunshine. As you progress further west and north, the weather is colder and a little harsher, and there is a higher chance of snow in the north and far west of the region.

Is There any Suitable Trekking Route for a Tibet Winter Tour?

Despite many parts of Tibet being colder in the winter months, there is no reason not to come for some great trekking adventures. The route along the hermitage trail around Lhasa is one of the best trekking trips for one-day trekking and can be done at any time of the year. 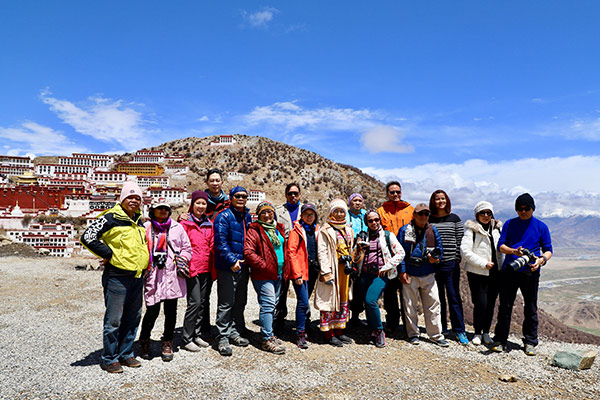 Tourists can try the trek from Ganden to Samye Monastery during winter season.

The trek from Ganden Monastery in Lhasa to Samye Monastery in Shannan Prefecture, is also a good winter trek, as the weather in the south of the region is a little milder than in Lhasa and Shigatse. The trek also gives you a chance to see the famous Samye Monastery, the first Buddhist monastery in Tibet, built in 762 AD.

Whenever you go trekking in Tibet, making sure that you have all that you need for trekking in Tibet is of utmost importance. You do not want to get caught out in the cold at night without enough clothes to keep you warm, or a decent sleeping bag for the chilly nights. Nor do you want to try trekking up to 80 kilometers in rubber shoes or trainers. Good trekking equipment is vital not only for your comfort, but for your survival as well.

A good trekking kit includes sturdy hiking boots, plenty of thinner clothes to layer to keep out the cold, and warm pants, made of waterproofed material is best. Socks should be woolen and thick enough to pad the feet against blisters, and gloves to keep your hands warm. Always bring a hat, not only for keeping your head warm, but also to keep the UV rays off your scalp, as you will be out under the sun for long hours during the day.

A good warm jacket to put on when you stop is essential, as it can get very cold when you stop trekking for the day. You need to make sure that your backpack is not too large and comfortable as well, as you will be carrying it over rough terrain for many kilometers. Chest straps between the shoulder straps help to keep the backpack in place and not moving around on your back, as this can cause sores and abrasions.

For many treks, it is a good idea to use a walking stick, as there are some parts of the trails that are rough and rugged, with large stones to scramble over, and the stick helps to keep your balance. Bring a good water bottle with you that you can use while walking, and refill when you stop to rest, as plastic bottles are not ideal when trekking. You can also pack some energy bars or high-energy foods such as dried fruit, nuts, chocolate, biscuits, etc., which you can snack on as you travel, to keep your energy up in the high altitudes.

0 Comment ON "Tibet Trekking Season: Find the Best Time to Trek the Best Place in Tibet"