Tibet Mountain Monastery: Why Many Tibetan Monasteries are on Mountains and the Best 5 to Visit

All across Tibet, monasteries abound. At the last count, there were some 1,700 monasteries in Tibet, from the simplest lamasery to the stunning and sacred Jokhang Temple. Many of the monasteries are built on the tops of mountains and hills, or on the cliffsides of the highest mountains. Wherever you go, these mountain monasteries tower over the land below from their elevated perches in the sky.

Buddhism is the predominant religion in Tibet and has become so important to the Tibetan people that it is now a part of their daily lives. For most Tibetans, Buddhism has become a part of the culture of the people and is practiced in just about everything they do. From the simple rituals of waking in the morning to the complex rituals associated with gathering the harvest, Buddhism has a place in it all.

Why Many Tibetan Monasteries are on Mountains?

But why place the monasteries, which are popular places for Tibetans to travel to for worship and pilgrimage, on high mountains and in remote areas? There are many reasons why monasteries are built in certain places, such as the tops of mountains and beside remote high-altitude lakes. The most prevalent reason for this is the site itself.

In Tibetan Buddhism, mountains are believed to be where the earth meets the heavens, and it is believed that deities reside on these mountains, making them holy places for worship. It is also thought that those who have reached nirvana, or enlightenment, and come back to guide those still on earth along the right path, dwell on these sacred mountains.

Both mountains and lakes are held to be sacred in Tibet, and the monasteries on the tops of mountains are believed to be closer to the heavens, and therefore more spiritual. In addition, these remote locations mean that pilgrims have to travel for long distances to get there, often facing many challenges along the way, which makes them more worthy to worship at the sacred sites.

When you plan your Tibet tour, Tibet monasteries are the places you must go. And here are the top 5 monasteries on mountains in Tibet, where you can not only explore the sacred religious culture, but also enjoy a marvelous landscape on the vast plateau.

Potala Palace, located on the top of Moburi (the Red Hill), looks down on the city of Lhasa like an immense protector, its red and white walls guiding travelers to the site from far away, as it can be seen for miles across the area. 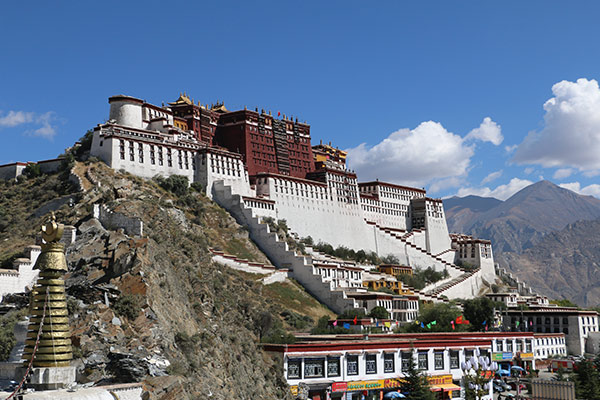 Potala Palace is a landmark and must-see for tourists when touring Tibet.

Over 300 meters above the city, Potala Palace lies on the site of one of the temple fortresses of the ancient Tibetan king, Songtsen Gampo. Very little of that original structure remains and that is now incorporated into the palace itself.

Constructed in the 17th century by the fifth Dalai Lama, the palace was once the seat of Tibetan governance until it was moved to Norbulingka Palace in 1755. Getting to the palace itself involves climbing several flights of steps that wind their way up the side of the hill. The climb is not an easy one, and in the high altitude of Lhasa, foreign tourists often need to take a rest at several points along this huge climb.

The highest “ancient palace” in the world, its highest point reaches a staggering 3,750 meters above sea level and includes over 1,000 rooms on 13 floors, with stunning gilded roofs. Built in two parts, the Red Palace and the White Palace, this monument of ancient Tibetan architecture has stood for centuries as a monument of Tibetan Buddhism.

The Palace is open seven days a week from 9:30am to 3:00pm, and tickets are booked by tour operators in advance. Each ticket has an entry time stamped on it, and you will need to be at the entrance at that time in order to get in. As huge as the palace is, it has a limit of one hour for visitors, to allow more people to visit without damaging the ancient structure.

Located at the foot of Mount Gambo Utse some five kilometers to the west of the center of Lhasa, Drepung Monastery is one of the Great Three monasteries of the Gelugpa School of Tibetan Buddhism. It is known as the most important monastery of the Gelugpa School and its grandiose white construction closely resembles a pile of rice. This gave rise to its name, as the word “drepung” translates from Tibetan to English as “collecting rice”. 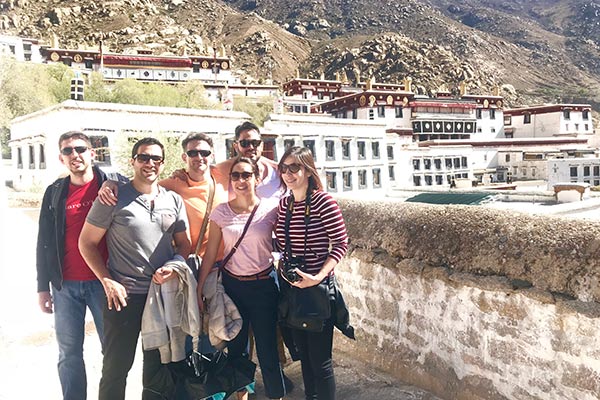 Drepung Monastery is famous for the thangka display during Shoton Festival.

Established by the disciple of Tsongkhapa in the 15th century, Drepung is famous for its massive thangka display during the annual Shoton Festival. As part of the ceremony of the Shoton Festival, also known as the Yogurt Festival, a thangka more than 100 meters high is unveiled on a giant frame on the side of the hill behind the monastery, and thousands of Buddhists gather there during the ceremony to pray and throw hada onto the painting.

The monastery is open from 9:00am to 4:00pm daily, and costs around 60 CNY to enter. You should prepare around three hours for visiting the monastery, as there is a lot to see. 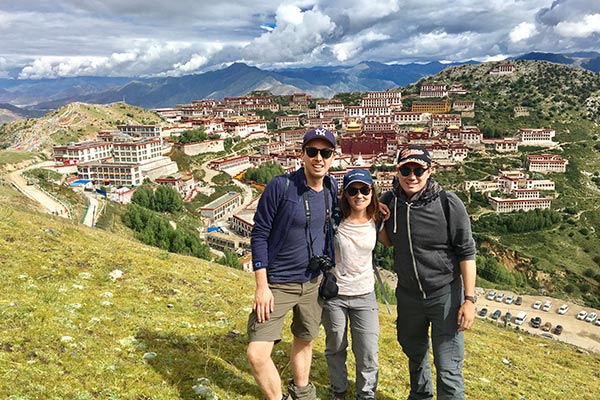 From Ganden Monastery, tourists can trek along a classic route to the Samye Monastery.

For many visitors to Ganden monastery, it is the start of one of Tibet’s most popular treks, from Ganden Monastery to Samye Monastery, the first monastery ever built in Tibet. Regarded as one of the best hiking routes in the world, the Ganden to Samye trekking trail covers a distance of 80 kilometers and takes 4-5 days to complete. It is not considered to be an easy trek, though the stunning scenery along the route does make it worthwhile. The highest point of the trek is the Shogu La Pass, which stands around 5,250 meters above sea level.

Tickets for the entrance to Ganden Monastery cost around 40 CNY, and the monastery is open from 9:am to 4:00pm daily. At least two to three hours is needed to tour the monastery properly, but with its distance from Lhasa, it can make a great day tour.

Believed to be the first palace in Tibetan history, Yumbulakang Palace lies on the top of the Zhaxici Hill to the south od Tsedang Town in Shannan Prefecture. Lying in the area of what is thought to be the cradle of Tibetan civilization, the palace is believed to have been built by Bon religious followers for the first Tibetan king, Nyatri Tsenpo. 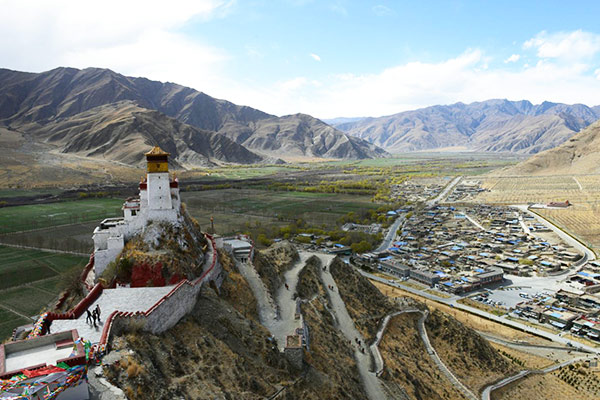 Yumbulakang Palace is belived to the first palace in Tibetan history.

The palace actually served as the royal palace for the Tibetan kings until it was moved to Lhasa by the 33rd king of Tibet, Songtsen Gampo. The palace was later transformed into a temple and monastery, and it is said that the king and his wife, Princess Wencheng, spent the summer at Yumbulakang after their marriage in 641 AD.

The murals in the monastery tell the story of the first Tibetan king and how he descended from heaven and was taken as king to the Tibetan people of the period. Believed to be immortal, the first king ascended to heaven on the cord that first lowered him to the earth instead of dying.

Yumbulakang Palace is open from 9:00am to 6:00pm daily, and visiting is limited to one hours per person. Entry costs around 60 CNY per person.

Founded in 1179, Drigung Til Monastery is one of the oldest monasteries in Tibet and has been the main seat of the Kagyu School of Tibetan Buddhism since it was constructed. Located in Maizhokunggar County, around 132 kilometers east-northeast of the Tibetan capital, the monastery is said to have the best sky-burial ceremony in Tibetan Buddhism. Sitting at an altitude of 4,465 meters above sea level, it is said that the bodies of the dead here will not fall down to the three bad regions after the ceremony. 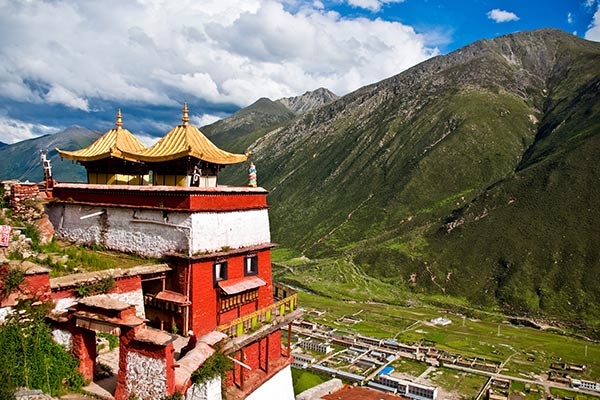 Drigung Til Monastery is one of the oldest monasteries in Tibet at an altitude of 4465 m.

While the idea of seeing a sky-burial may be to some people’s liking, viewing of the actual ceremony by visitors is forbidden, and the area where the sky burials take place is fenced off and surrounded by a multitude of prayer flags.

The monastery complex at Drigung Til consists of more than fifty buildings, and the main hall of the monastery stands on a pedestal of solid stone that stands about 20 meters high. Ancient legends state that the site was chosen by the founder of the monastery, Jigten Sumgon, after he flowed a female yak, known as a “dri”, and the site was where the dri lay down. The preserved horns in the main hall are said to be the horns of the yak that Jigten Sumgon followed. The monastery is open from 6:00am to 6:00pm daily, and admission is around 45 CNY.

0 Comment ON "Tibet Mountain Monastery: Why Many Tibetan Monasteries are on Mountains and the Best 5 to Visit"