Tibet is a land of mountains and lakes and has been a major Buddhist location for thousands of years. Anyone planning a tour of Tibet will find that there are more places of sacred status in Tibet than anywhere else in the world. Sand if you want to visit some of the most sacred sites in this stunning region, here is a list of the most sacred of all the Tibetan Buddhist destinations on the Roof of the World.

The Jokhang Temple is considered to be the most sacred temple in Tibetan Buddhism, and houses one of the oldest statues of Buddha in existence, known as the Jowo Rinpoche. The temple was built on the site of a former lake, which drained to allow the building of the temple on the site. 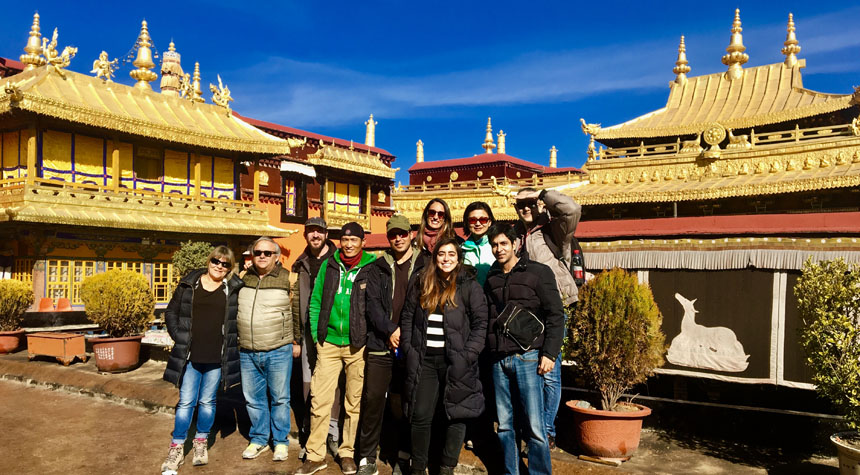 Jokhang Temple is the most sacred temple in Tibetan Buddhism

The temple itself is a beautiful combination of architectural styles from Tibet, India, and Nepal, and the front of the temple, outside the main entrance, is an important site for pilgrims prostrating themselves in front of the temple. As you walk around the inside, you can find numerous chapels and cloisters, many of which will contain monks in prayer and the sacred statue of Shakyamuni Buddha at the age of 12.

As one of the most historic and culturally important monasteries in Tibet, the Tashilhunpo Monastery in Shigatse is the traditional seat of the Panchen Lama, the second-highest incarnation in Tibetan Buddhism. The largest statue of Buddha in Tibet also resides here, a Maitreya statue that stands 26.2 meters tall. 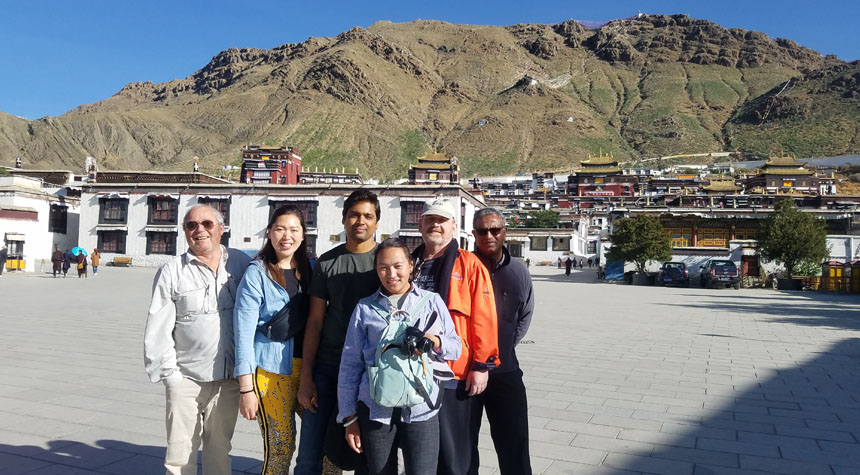 Built in 1447 by the first Dalai Lama, the monastery is one of the Six Major Monasteries of the Gelug Sect, and is known as the “Heap of Glory”. As well as the grand Palace of the Panchen Lama and the Kelsang Temple site, one of the oldest buildings at the monastery, the site is filled with wall paintings in a variety of unusual shapes and resplendent colors.

Once the largest monastery in the world, Drepung Monastery had more than 10,000 monks at its height. Now a major monastic university, the monastery is still the site of the opening ceremonies of several festivals, including the famous Shoton Festival. 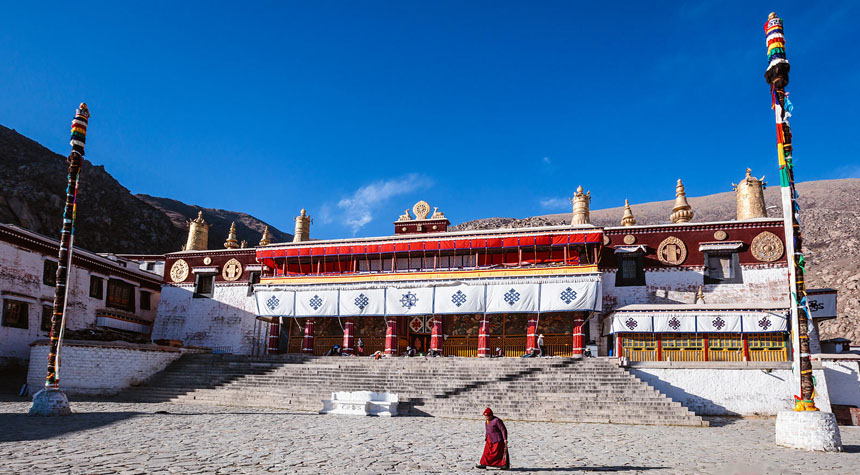 Drepung Monastery, one of the "great three" Gelug monasteries) of Tibet

The Shoton Festival is one of Tibet’s most important festivals, and celebrates the end of the 100 days of fasting of the monks with yogurt, hence it is also known as the Yogurt Festival. Drepung holds the opening ceremonies of this festival, including the viewing of a giant thangka that is unfurled outside the monastery in the first light of the day.

Sera Monastery is located just north of the city of Lhasa, and was named for the wildflowers that grew on the hillside where the monastery now lies. A major university monastery of the Gelug tradition, Sera is also the parent monastery to a number of nunneries and hermitage sites around the outskirts of Lhasa. 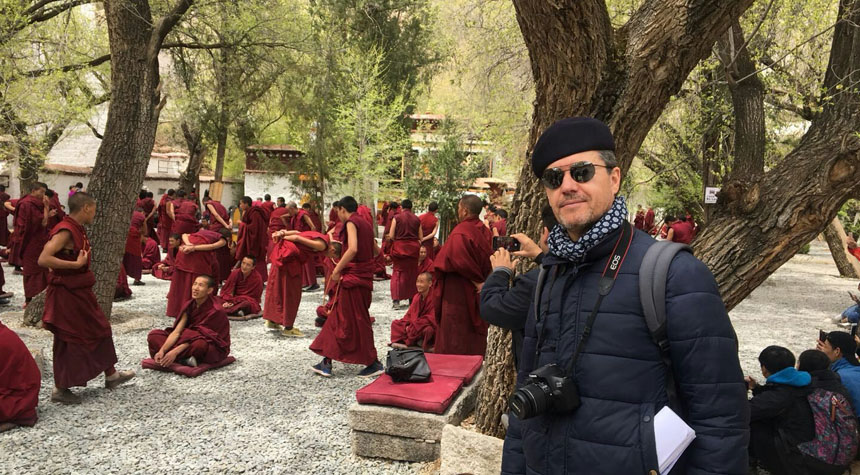 Watching monks debate is one of the highlights during your Tibet tour.

With over 3,000 monks in residence, the most popular aspect of Sera Monastery is the debating session that is held daily in the debating courtyard at 15:00. The debates are loud and vociferous, with shouts and exclamation as well as a variety of extravagant movements and plenty of clapping and stamping. It is also a highlight of every Lhasa tour for tourists experience the unique Tibetan culture and religion.

Known as the “Heavenly Lake”, Lake Namtso lies at an altitude of 4,718 meters above sea level and is the largest lake in Tibet. Also the highest saltwater lake in the world, Lake Namtso lies between the stunning Nyenchen Tanglha Mountains and the vast open Changtang Grasslands on the boundary between Lhasa and Nagchu. 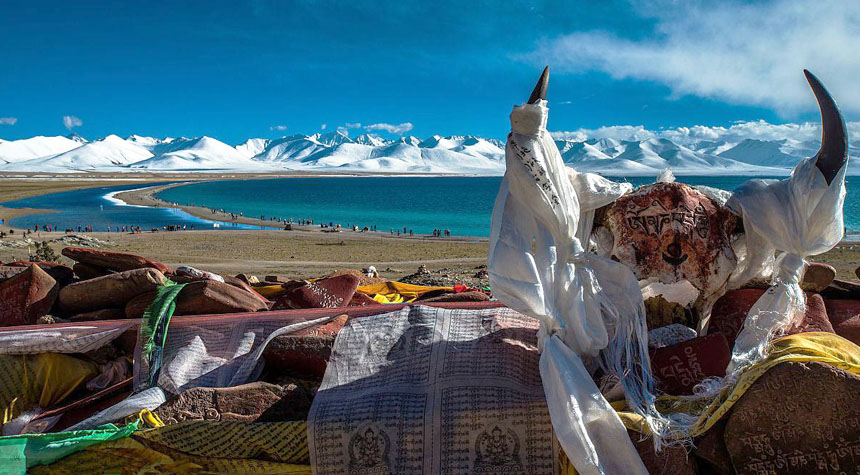 The lake can be easily reached from Lhasa in around four hours, and the new road across the Nyenchen Tanglha Mountains has made travel to the lake even easier. Best visited from April to October, there is no hotel at the lake, but you do have a campsite you can stay in to watch the stars at night.

Namtso lake can be easily reached from Lhasa in around four hours, and the new road across the Nyenchen Tanglha Mountains has made a trip to Namtso Lake even easier.

The best time to visit Namtso Lake is from April to October. It is recommended to stay one night at the lake side to enjoy the amazing starry night and sunrise by the holy lake.

Besides the classic sightseeing around Namtso Lake, you can also join in the local pilgrims to do the Namtso Kora. The kora route around Namtso Lake is long and tough, and it is believed that, if you walk the kora in the year of the sheep, you will be blessed with health, knowledge, and good fortune.

Surrounded by the dull grey mountains, Lake Yamdrok shines in the sunlight as one of the most beautiful lakes in Tibet. One of the Great Three Sacred Lakes of Tibet, this long and widespread freshwater lake is a popular tourist destination. 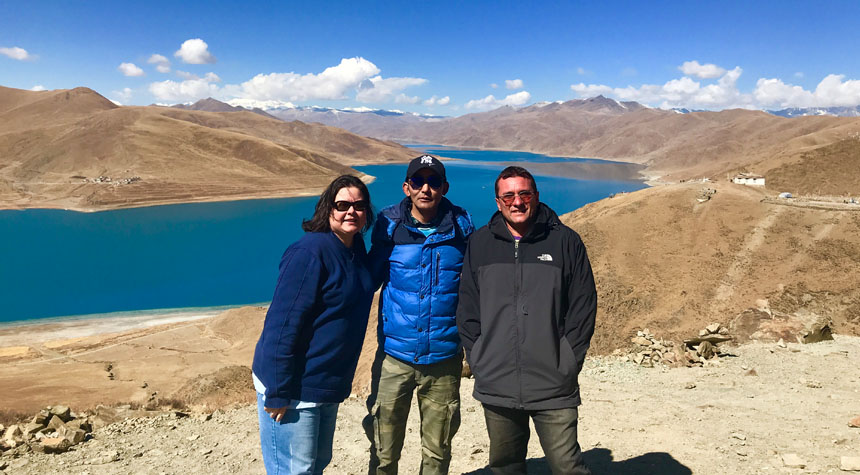 Associated with the Guru Padmasambhava, who is credited with introducing Buddhism to Tibet, Lake Yamdrok is also renowned for being part of the life-blood of Tibet. It is believed that if the lake ever dries up, Tibet will no longer be habitable. Best visited from April to October, the lake Yamdrok is normally a stopover on the way to Gyantse and Shigatse.

Noted for being the holiest lake in Tibet in Buddhism, Lake Manasarovar in Ngari Prefecture in northwest Tibet is also sacred to Hindus. The local Tibetans believe the lake was created in the mind of Lord Brahma and manifested on earth, and that to bathe in or drink the waters you can wash away the sins of a lifetime. 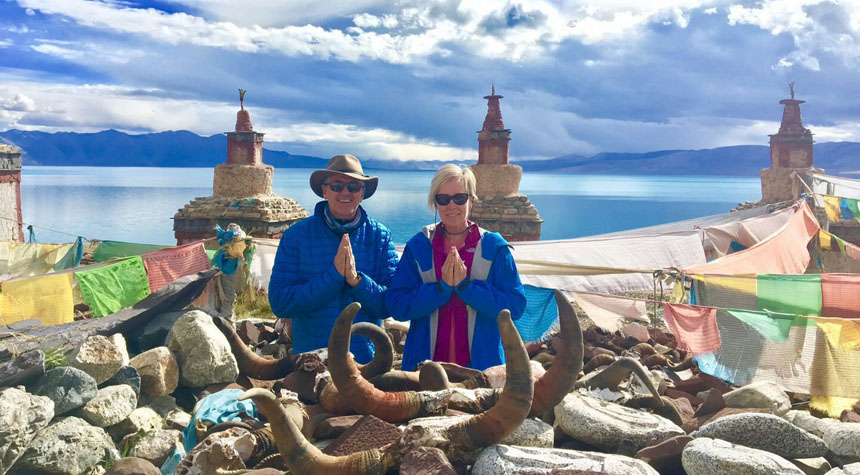 Our clients visited the sacred Manasarovar Lake in Tibet.

A major pilgrimage destination for Buddhists, Hindus, Jains, and Bon, in Buddhism, it is believed to have been the location where Maya Devi is believed to have conceived Buddha. The best time to visit Mount Kailash and Mansarovar Lake is from April to October, especially during the Saga Dawa Festival in the summertime.

The most sacred mountain in the world, Kailash is believed to be the earthly representation of Mount Meru, the mountain of the gods at the center of the universe. Held as sacred in four religions, the mountain is reached by road from Lhasa to Darchen, and can only be done on an organized tour. 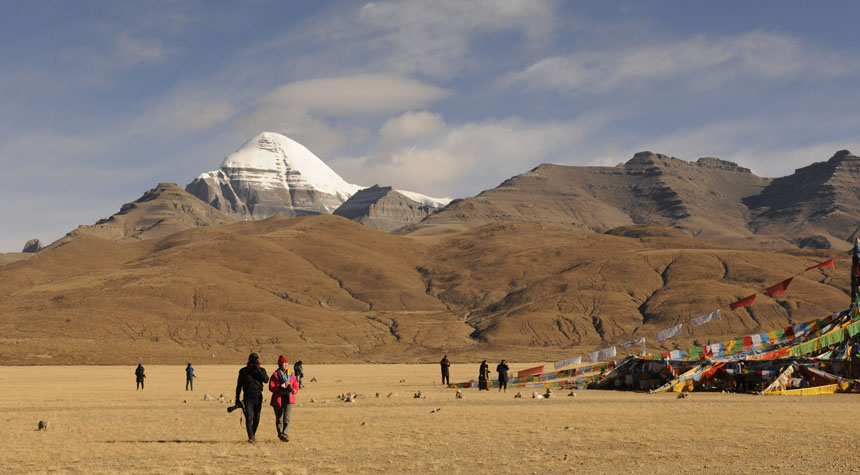 Mount Kailash is believed the most sacred mountain in the world.

Located in northwest Tibet’s Ngari Prefecture, most tourists take a 15 days Mount Kailash tour from Lhasa, which includes a classic 3-day Kailash Kora and covers the most essential parts from Lhasa to Ngari via Mount Everest region. Best visited in spring and autumn in Tibet, this sacred mountain’s slopes have never felt the tread of mortal feet.

Known locally as “the spear piercing the sky”, Namjagbarwa is a sacred mountain in the ancient Bon religion that pre-dates Buddhism in Tibet. The sacred mountain has never been climbed, and its virgin peak lies at an altitude of 7,782 meters. Located at the entrance to the Yarlung Tsangpo Grand Canyon in Nyingchi Prefecture, the mountain is best viewed from the Sejila Mountain Pass, as it is not possible to drive to the mountain itself. Nyingchi ca be easily reached from Lhasa by either road or flight, and soon by rail as well. 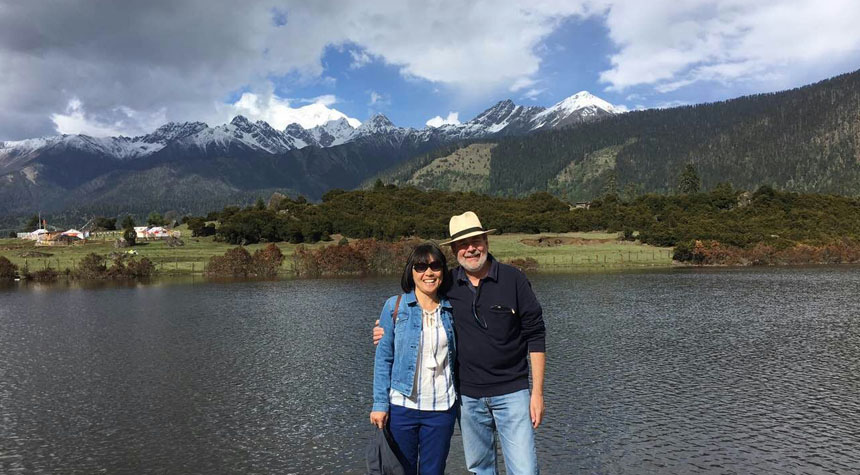 How to Arrange a Tibet Tour to those Holy Places

Pick up your favourite travel route

We offer a number of dedicated Tibet travel packages on pre-designed routes as the most classic Tibet small group tours that covering the best highlights of Tibet. You can choose your favourite travel route and time and travel with like-minded travellers from all over the world.

Also, you can customize your own Tibet tour according to your own requirements and needs. Just tell our professional Tibet travel experts what you are looking for in Tibet and your personal interests, like biking, hiking and culture experience, our experienced local travel expert will help you arrange the best Tibet tour for you.

Choose your time to visit

The best time to visit Tibet is when you are ready. But there are times when it is better for certain things. Summer is best for the cultural activities such as the major festivals, from May to October. And for those that want to go trekking in Tibet, April to May and September to October are the best options.

All foreign tourists to Tibet are required to have the important Tibet Travel Permit in order to enter the region and travel around. This permit is only available to tourists that are booked on pre-arranged tours of Tibet with a registered travel agency, and we can offer the perfect hassle-free service to get you your permit without any problems. We can also easily get all the other permits you will need, in time for your tour of the Roof of the World. 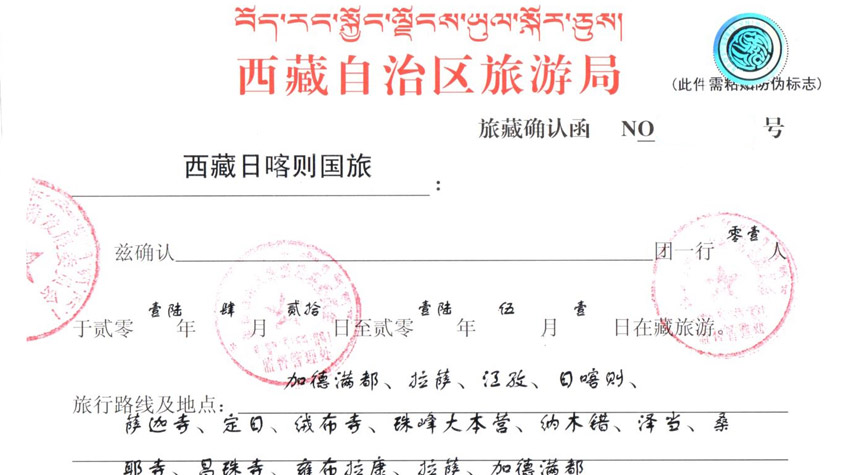 Dos and Don’ts when visit the holy places in Tibet

While visiting the sacred places in Tibet, there are something you need to pay attention to:
1. When you are walking around a temple, monastery, or Stupa, always do it in a clockwise direction.
2. Tibetans are very sensitive about their religion and beliefs. Please do not disrespect them and their religious beliefs and sites.
3. Women should always be covered when visiting temples and holy sites, Shoulders and arms should be covered, and a long skirt or long pants used to cover the legs.
4. Do not point the soles of your feet at the sacred objects and altars in temples and at holy sites, as this is considered to be rude.

Tibet has a number of sacred sites, many of which are natural sites such as mountains and lakes, as well as the usual temples and monasteries. In fact, every mountain and lake in Tibet is holy in some way or other, which means that no matter where you go, there is a holy site for Buddhists to pray at. For the holiest sites in Tibet, it is an amazing experience to visit such sacred places and learn more about the wonders of Tibetan Buddhism there.