What is the Elevation in Tibet?

Tibet has an average elevation of around 4,800 meters, and even reaches as high as almost 6,000 meters in places. Angling downwards from the northwest to southeast, Ngari and Nagqu are the highest prefectures in the region, each averaging around 4,500 meters above sea level. In the far southeast of the region, Nyingchi Prefecture is the lowest in elevation on the plateau, averaging around 3,100 meters, though some of the higher areas are as high as 4,500 meters above sea level.

Many of the areas with higher altitude in Tibet are rarely visited by foreign travelers, and majority stick to the lower prefectures of Lhasa, Shigatse, Shannan, and Nyingchi. The area of Nagqu and Ngari is arid and dry, with very little in the way of civilization, and there are even some parts of the region that are completely uninhabitable except by wild animals due to their extreme elevations.

The capital city of Tibet Autonomous region, Lhasa lies in Lhasa Prefecture, in central Tibet, with an elevation of 3,656 meters. Lhasa Prefecture lies at an average of around 3,650 meters above sea level, and is one of the most popular places to visit in Tibet. Filled with amazing sights of the temples, monasteries, and landscapes, Lhasa is a beautiful part of the region, and the home to some of Tibetan Buddhism’s most sacred sites, such as the Jokhang Temple and Lake Namtso. 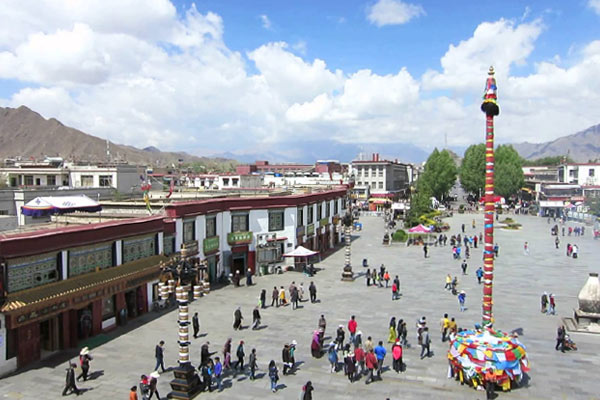 While the altitude of Lhasa is as high as much of the plateau area, at 3,650 meters it is high enough to cause high altitude sickness in Tibet if not properly acclimatized, and as the first place you come to when visiting Tibet, it is the most important place for acclimatization. Many travelers to Tibet come in through the international airport, flying in on planes that have pressurized cabins. AS such, the drastic change in barometric pressure can easily cause altitude sickness, so it is important to rest and acclimatize properly for the first few days to prevent altitude sickness. Also, you can take a Tibet train to Lhasa to get used to the altitude raising during the train journey.

To the west of Lhasa lies Shigatse Prefecture, with an average elevation of around 3,800 meters. While Shigatse is not much higher than Lhasa, on average, it is in certain areas, and places like Tingri (4,300 meters), Rongbuk (5,100 meters), and Everest Base Camp (5,200 meters) are some of the highest parts of the Prefecture. Shigatse is the second city of Tibet, and is also a popular place for tourism in the region, with thousands of visitors to the city daily in the peak season.

With very little in the way of altitude difference between Lhasa and Shigatse, the need for long acclimatization no longer exists, as long as you do not exert yourself too much. Strenuous activity should be avoided at first, and with most of the attractions in the area at an even elevation, the change in altitude can be easily overcome.

Altitude of Everest Base Camp

Everest Base Camp (EBC) lies at an elevation of 5,200 meters, and is one of the highest places you will visit on a normal tour of Tibet. At a much higher elevation than both Shigatse and Lhasa, the risk of Acute Mountain Sickness (AMS) or altitude sickness is much greater, especially since it is an area where strenuous activity is often done. 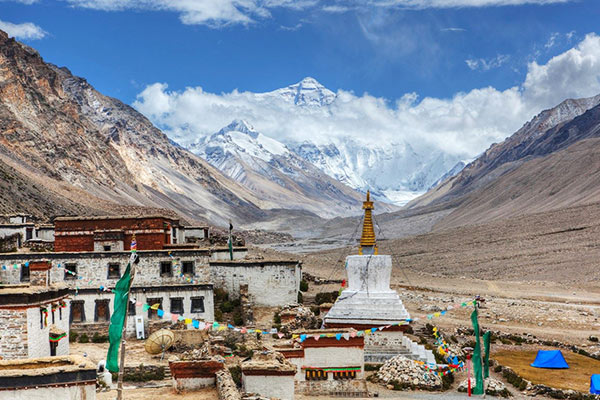 When travelling to Everest Base Camp, the risk of Acute Mountain Sickness is much greater.

Majority of Everest Base Camp tours that head to the base camp through Shigatse, and then on to Tingri at 4,300 meters, and Rongbuk Monastery, the highest monastery in the world at 5,100 meters. Rongbuk makes a great stopping point for the day to acclimatize oneself with the increase in altitude, before heading to Mount Everest’s tourist base camp to view and photograph the world’s tallest mountain. While at Rongbuk, it is essential not to perform any strenuous exercise while your body adjusts to the increased altitude. You should get plenty of rest and properly hydrate whilst there to help reduce the risk of AMS.

As Rongbuk is only a short distance from EBC, people often want to make the hike to get there, and if you are not in your best condition, or are suffering from altitude sickness already, then this should be avoided. Shuttles run to the base camp, to save you from the hike, and should be used for those not up to making the trek. While at the base camp, strenuous exercise should be avoided, and plenty of water taken to avoid dehydration at this increased altitude.

Far to the north of Mount Everest, in Ngari Prefecture, lies the holiest mountain in the world, Mount Kailash. This sacred mountain is revered in four separate religions, and the town at its base, Darchen, lies at an altitude of around 4,575 meters above sea level. However, for many of the people traveling there to visit or pray at the mountain, Darchen is not the highest elevation they will encounter. 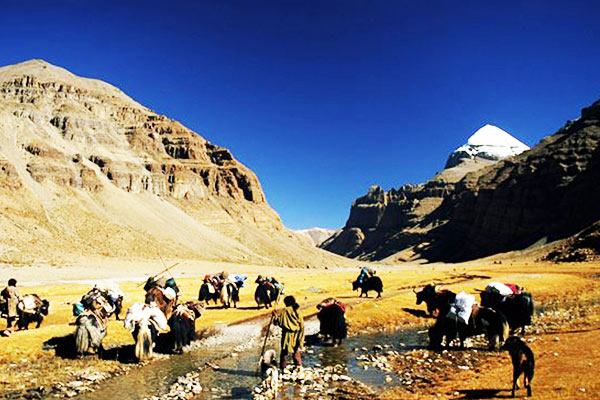 Tourists will go through high altitude from 4,575m to 5,630m during Kailash kora.

Around this sacred mountain is a kora route, a path trodden by those devout believers in search of enlightenment. The Mount Kailash kora extends for 52 kilometers around the mountain, and is an arduous and hard trek taking around three days to complete. The altitude continuously increases for the first day and a half of the trek, and peaks at the famous Dolma La Pass, which lies at an elevation of 5,630 meters. At this high elevation, the highest many people will encounter in Tibet, the risk of AMS is greatly increased, especially as it takes an enormous amount of strenuous exertion and effort to get there.

The first thing to think of when planning a trip around the Mount Kailash kora is your own physical fitness. The trek is not for the faint-hearted, and should only be done by those that are physically fit enough to complete it. For those that are, while making the trek, it is important to remain well hydrated at all times, take frequent rest stops while trekking upwards, and rest properly at the stopping points along the route, to try and avoid the worst of the symptoms of AMS.

The treks around the mountain are organized with the use of expert guides, who have years of experience of both the trek and of AMS itself, and are well prepared for any eventuality. One should be aware of the symptoms of AMS and how to recognize them in yourself, and report any changes in your health to your guide as soon as they occur.

North of Lhasa, around 260 kilometers distant, lies one of the Great Three holy lakes of Tibet, Lake Namtso. Known as the “Heavenly Lake”, Namtso Lake lies at an elevation of around 4,718 meters. Surrounded by the Nyenchen Tanglha Mountains to the south and southeast, and the hilly region of Nagqu to the north and west, the lake lies at a much higher altitude than Lhasa, and acclimatization may be required when traveling there. While the trip can be done from Lhasa in just one day, it is a long drive, and we recommend that you take at least two days to visit the lake, so that some acclimatization can occur and you get the best out of the time you can spend there. 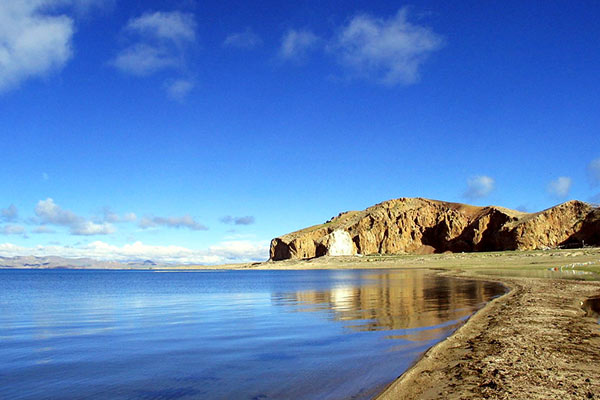 Namtso Lake lies at an elevation of around 4,718 meters, much higher than Lhasa city.

The lake is an area of outstanding natural beauty, and with so much to see there, it can be very tempting to wander along the shoreline too much, expending too much energy and increasing the risk of AMS. While spending time at the lake, you should try to take it easy, hydrate plenty, and enjoy the stunning natural scenery that is all around you.

On the eastern edge of the Qing-Zang Plateau lies Nyingchi Prefecture, the lowest area of the Tibet plateau with an average elevation of around 3,100 meters. While the average elevation may be above 3,000 meters, there are many parts of the prefecture that are much lower, reaching as low as around 900 meters. However, there are also areas that are much higher, reaching above 4,000 meters, with the peak of Mount Namjagbrawa being the highest point of the prefecture at 7,782 meters.

In many parts of Nyingchi, you will not need to worry about AMS, as the elevations are low enough for it not to have any effect on your health. However, when traveling around the area, you should be aware of the changes in elevation from one place to another, and react accordingly in terms of acclimatization procedures, especially if traveling from a very low area to a high one.