How about the Summer in Tibet?

Set on a high altitude plateau, surrounded by mountains in all directions, Tibet is a land that is often known as the Roof of the World. The plateau on which Tibet lies is the highest in the world, and it has recently become a popular destination for tourists that are interested in the unique people and culture of this land of snows.

With an open season for tourists that runs from April to January, the plateau sees majority of its foreign and Chinese visitors in the summer months of June, July, and August. The peak season for tourism in Tibet, a huge percentage of all visitors travel in these three months, when the temperature is at its hottest and the climate is not as dry as the rest of the year.

Traveling to Tibet in the summer means that you will have to endure the crowds of foreign and Chinese tourists that flock to the region every year, although there are several benefits to traveling in summer as opposed to the rest of the year. All of the attractions and sites in Tibet are open in the summer, and with warmer weather and more humidity, the oxygen levels are much higher than during the rest of the year, which slightly reduces the risk of altitude sickness when traveling to the high plateau.

Climate and Temperature of Tibet in June, July and August

Tibet is a country that is affected by the northeast and southwest monsoon seasons, which give it a wet and dry season. Summer in Tibet is the wet season, the time of the monsoon rains, and only lasts for three months of the year, with most of the rain falling in July and August across the region. The southwest monsoons travel from the oceans to the land, bringing with it more moisture and causing the heavy monsoon rains of the tropical countries of Southeast Asia.

However, in Tibet, this is a little different from the monsoon seasons elsewhere in Asia. The high Himalayan Mountains catch the rain before the clouds cross them, and most of the rain they carry falls on the southern and western sides of the mountain range. This leaves little rain for the plateau region, which makes summer a great time to visit. 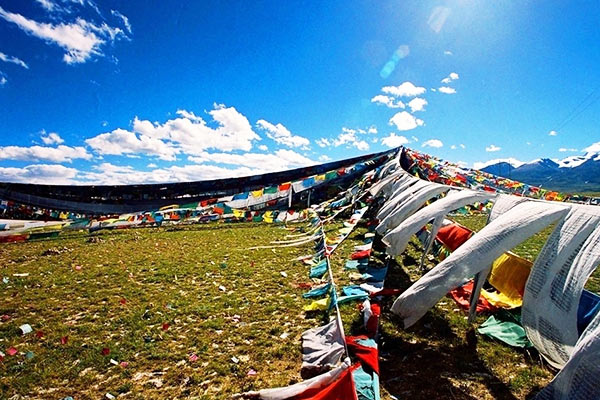 Summer is a great time to visit Tibet.

Temperature-wise, the plateau is at its warmest all across Tibet during the summer months, although the weather doers vary from area to area. In the eastern region of Tibet, around Lhasa and Nyingchi, the weather is slightly warmer than in the west and far north, where the altitudes are much higher. Altitude plays a huge part in the temperatures and climate of the region, and the higher the altitude, the colder it will be, even in summer.

In June, the temperatures are continuing to rise, as the summer progresses from spring, and as it gets hotter, the southwest monsoon brings in the little rains. Temperatures in June average around 20 degrees during the day, although this can drop to as low as around 6 degrees at night in the lower-lying areas. In the higher latitude areas, this low temperature at night can be below freezing, while the daytime average reaches as much as 15-20 degrees. As June progresses, the rains start to fall, averaging around 50-70 millimeters throughout the second half of the month.

As July rolls around, the rains become a little heavier, although they are normally only occurring in the late afternoons and early evenings, or overnight while you are sleeping. By morning, the land is dry again, with bright sunshine ready for the next day of your tour. On average, there is around 125-130mm of rainfall throughout the month, although many of the days are still very clear and bright. Temperatures can reach as high as 26 degrees in the lower areas of Lhasa and Nyingchi, and as high as 22-24 degrees in the west and north of the region. Nights can still get a little cold in the outlying areas, though, with lows of around 1-2 degrees in the most remote and highest areas. In Lhasa, the average nighttime temperature drops to only around 9 degrees, which is a balmy winter’s night in many European countries.

August is the month of maximum rainfall, with more than 130mm on average throughout the month. Travel can sometimes be hampered by the rains and snows in the far outlying areas of Tibet, though it is still warm and sunny for most of the days in August. Temperatures are not as hot as in June and July, with an average high of around 24 degrees. However, the lows are not as low at night in many areas, with nighttime temperatures in Lhasa reaching as high as 9 degrees, and in the Everest region as high as 2-3 degrees.

Throughout August, most of the rain occurs during the nights, which leave the days still bright and clear for traveling and visiting the sights and attractions of Tibet. However, in the mountain areas of Tibet, there is still a higher chance of clouds covering the high mountain peaks, which makes viewing and photographing the summit of Everest a bit of a hit and miss thing.

Summer is the time when the sun’s radiation is at its strongest, and it is important to protect yourself against the harmful rays of the high-altitude sunlight during your Tibet tour in summer. UVA and UVB rays penetrate the thinner atmosphere more easily, and in order to protect yourself, you need a little more than just sun cream.

One of the myths surrounding sun creams is that the higher the Sun Protection Factor (SPF), the more protected you are from the harmful rays of the sun. This is wrong, as it has been shown that an SPF of around 50 can block around 98 percent of the UVB rays, which are the cause of sunburn in most people. However, there is no sun cream that can block the more harmful UVA rays, which are what can cause skin cancers and other afflictions.

To protect against both UVA and UVB, it is best to combine a sun cream with an SPF of around 50 with a wide-brimmed hat, which can keep the sun off your face and neck, and find shade as much as possible when out in the direct sunlight. And this is advisable not just in summer, although that is when the UV rays are most harmful, but also in winter as even then, it can cause skin problems if not protected.

Summer is a great time in Tibet, and is the best time to visit some of Tibet’s most stunning attractions, such as Lake Yamdrok, Lake Namtso, Shigatse, Mount Everest, and Mount Kailash with Lake Manasarovar. With higher temperatures, less chilling wind, and bright clear skies, there are few better times in the year to take a tour of Tibet. 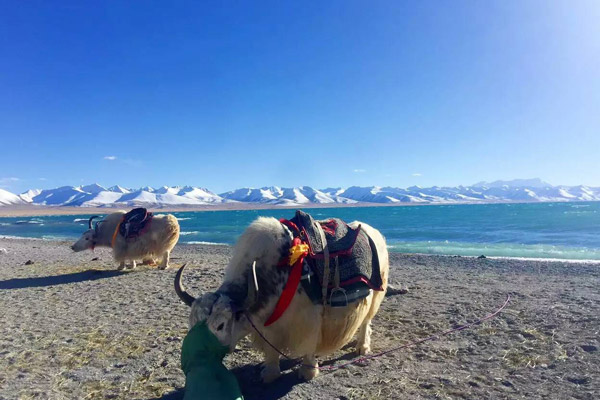 Sitting on the boundary between Lhasa and Nagqu Prefectures, Lake Namtso is more than 240 kilometers from the Tibetan capital, and is surrounded by the Nyenchen Tanglha Mountain range to the east and southeast, and the Transhimalaya to the north. To the west lies a huge expanse of hilly grassland on which nomadic herders graze their yaks and sheep, traveling the plains in search of the best pasture land.

A Namtso Lake tour can be done in one day, but with a five-hour drive each way, it is better visited over a few days, to get the most out of your time at this stunning spot of unique natural beauty. There are guesthouses and camping grounds on the lakeshore, where you can relax after a long day of exploring, and watch the stars come out in one of Tibet’s famous Dark Sky areas.

AS you leave Lhasa and head out to the west, the normal touring route passes by another of the Great Three lakes, Lake Yamdrok. Spread out over a huge area, the lake is shaped roughly like a Chinese fan, and is over 130 kilometers from east to west. At an elevation of around 4,441 meters, the lake is a saline lake, though is does have a very low level of salinity, as it is fed by the melting snow and ice of the mountains and glaciers that surround it. 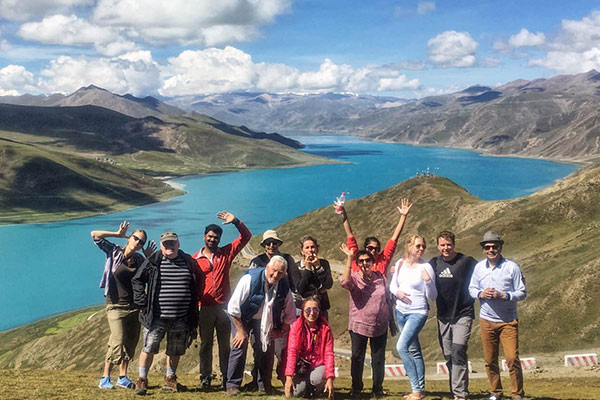 Pass Yamdrok Lake while overland from Lhasa to Kathmandu

The name, Yamdrok-Tso, means “upper pasture”, and the lake is often compared to the precious mineral, Jadeite for its stunning turquoise color. One of the most stunning sights in Tibet, the lake is home to thousands of migrating birds in the summer, that have flown up from lower areas to spend the summer in their breeding grounds around the lakeshore.

Further west from Lake Yamdrok, on the G318 Friendship Highway to Nepal, lies the second city of Tibet, Shigatse. Meaning “fertile land” in Tibetan, Shigatse Prefecture is known for its good grazing lands and fertile farming lands, and much of the area is used for the cultivation of Tibet’s largest cereal crop, highland barley.

The city of Shigatse, the capital of the prefecture, lies at the confluence of the Nyangchu and Yarlung Tsangpo Rivers, at an elevation of around 3,800 meters. The city is popular with tourists for its stunning monastery, Tashi Lhunpo, which is the former seat of the second incarnation in Tibetan Buddhism, the Panchen Lama.

To the northwest of Shigatse, in the Ngari Prefecture of northwestern Tibet, lies the most sacred mountain in the world, Mount Kailash. Believed to be the holy center of the universe in four religions – Hinduism, Buddhism, Jainism, and Bonpo – the mountain is a pyramid-like mass of jet-black rock that stands towering above the other mountains in the Gangdise Range. 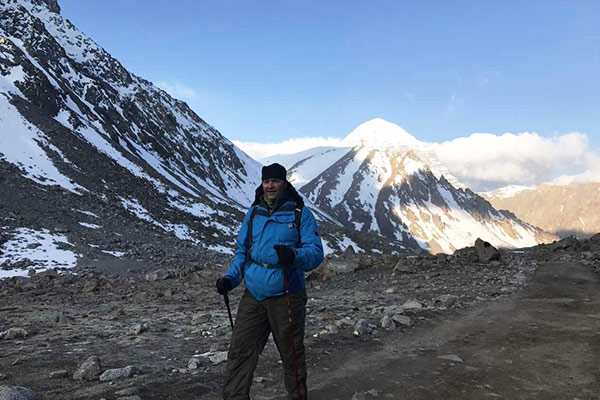 One of the most famous reasons to visit Mount Kailash is the kora route that circles the holy mountain, and which is a popular trek for both tourists and pilgrims alike. Every year, thousands of pilgrims travel to the mountain to perform the kora, a reverent trek that includes prayers and often prostration, around the mountain. Covering a distance of 52 kilometers from start to finish, and passing by five spectacular monasteries, the kora is a challenging trek and not for the faint-hearted. A rough and rugged trail, it takes the average person three days to complete, staying in monastery hostels around the kora route. However, there are those devout Buddhists that make the trek in one single day, to attain more merit on their journey to enlightenment.

The weather of Tibet in summer can be very damaging to the face and skin, so it is best to combine UV protective sun cream with a wide-brimmed hat to protect your exposed skin.

Temperatures can still get a little cold at night, so it is wise to bring some warmer gear with you for when it cools down after sunset and for the early morning starts.

Rain in the summer normally falls in the evening and overnight, but it can shower in the daytime as well, especially in the late afternoon. Take some light waterproofs with you to keep from getting drenched in an unforeseen downpour.