Can I Stay in a Local Monastery during My Tibet Tour

The monasteries of Tibet are some of the oldest and most unique in the world, and for some it is the dream of a lifetime to stay inside the monastery and experience the Tibetan monastic culture first hand.

However, the main problem for those wanting to stay in monasteries while traveling in Tibet is that there are not many places where you can stay. Monastic life is very secular and is often kept private and secluded, not allowing the outside world to see more than the basic outline of the monastery and the practices of its monks.

With majority of monasteries not offering accommodations to tourists, or in fact to anyone, the problem lies with finding monasteries that do allow people in. Tourists normally want to stay within a monastery to experience the monastic culture of the Tibetan Buddhist monks, and learn more about how they live and what they do during their Tibet Tours. Monasteries such as Samye in Shannan Prefecture, Tashilhunpo Monastery in Shigatse, and the Pelkor Chode Monastery in Gyantse, do not offer any kind of accommodation for tourists. In order to find somewhere to stay within the bounds of a monastery, one has to venture further afield, often to the most remote areas of Tibet.

There are some monasteries, mainly in the remote parts of the region, do offering accommodation for tourists, although this is not going to be in the same living quarters as the actual monks. In some places, the local monasteries have their own attached guesthouses, originally designed for the Tibetan pilgrims that travel the plateau heading for sacred sites where they will pray and perform ritual koras around the holy sites of Tibetan Buddhism. If you are keen on staying in one of them, please feel free to tell your travel consultant.

Rongbuk Monastery in Shigatse Prefecture is one such place that provides a guesthouse for pilgrims and tourists to stay in. Mainly used by tourists that have traveled to Rongbuk on the way to visit the stunning site of Mount Everest Base Camp (EBC) in Tibet, the monastery offers a basic guesthouse facility for tourists. There is also a restaurant on site for local Tibetan meals and good noodles. 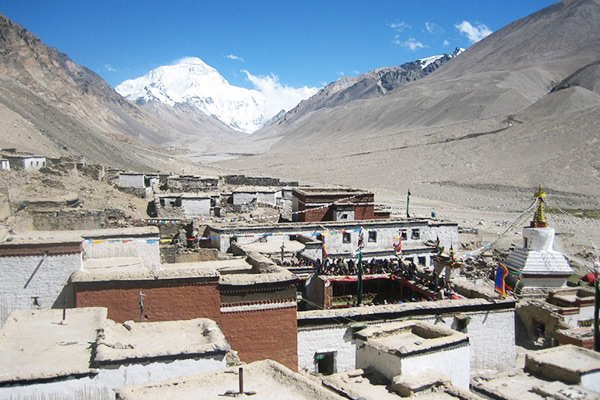 Rongbuk Monatery at EBC provides guesthouse for pilgrims and tourists for overnight stay.

Located around 4 kilometers from Everest Base Camp itself, it is probably the highest guesthouse in the world. Catering to up to 100 guests at a time in 30 rooms, the Rongbuk guesthouse is opposite the actual monastery, about 80 meters from the monastery itself. Many of the reviews of this basic guesthouse will tell you that it is “rustic”, but it does have good beds, plenty of bedding, and comfortable rooms to stay in.

There are no showers at the guesthouse, and washing facilities are a large metal bowl that you fill with water to wash in. Toilets are located outside and are the basic Chinese squat-style toilets. Do not expect a western toilet anywhere in Tibet outside the major hotels. The rooms are clean and decent and have either twin beds or four beds per room. Hot water is available for drinking coffee and for washing. Rooms are all around a central courtyard, and this is one of the best monastery guesthouses of all those available in Tibet. However, the peak season can often see the guesthouse being fully booked with visitors to Mount Everest.

The views of Everest from the guesthouse are stunning, and one of the highlights of the stay there is watching the sun rise and set on the slopes of the world’s highest mountain. Getting to EBC from the monastery is easy, as it is a mere eight kilometers away. Buses run the route to EBC, or your guide can take you in your private vehicle. For those with a sense of adventure, the trek to the base camp takes just one hour, and you get to view some of the spectacular scenery along the way.

For those traveling to Mount Kailash to walk the kora route, there are two monastery guesthouses along the Mount Kailash kora, at Drirapuk Monastery and at Dzultripuk Monastery. Each of the guesthouses are situated at the end of each day’s hiking, and are a great place to stay, though they can get full in the peak season and during the Saga Dawa festival in June. 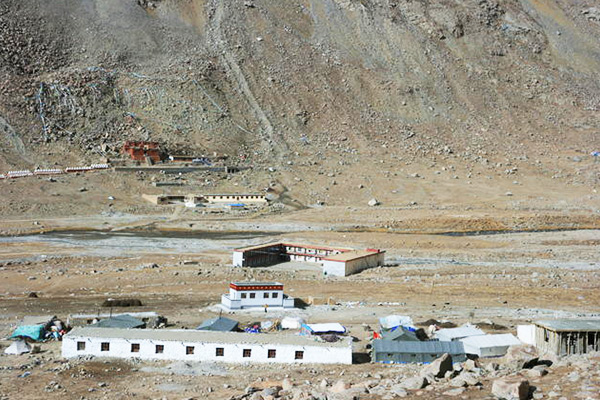 Simple guesthouses are available at the valley area near the Drirapuk Monastery.

The guesthouse at Drirapuk is newly built, and has rooms for 3, 5, and 8 people. The rooms are clean and comfortable, considering it is halfway round the kora route, and while there are no showers, hot water is available. Bedding is limited, so bring your own sleeping bag.

Dzultripuk guesthouse is a little more basic than the one at Drirapuk, though the rooms are dry and clean. Hot water is available for washing and for hot drinks, and the guesthouse does have clean squat-style toilets, though these are located outside.

Drigung Monastery is located around 140 kilometers to the east of the city of Lhasa. It was founded in 1179 and is said to have originally had 108 natural springs, an auspicious number in Tibetan Buddhism. It is also the site of one of the largest sky-burial sites in Tibet, where the bodies of the dead are chopped up and fed to the vultures as part of the ritual death ceremony. 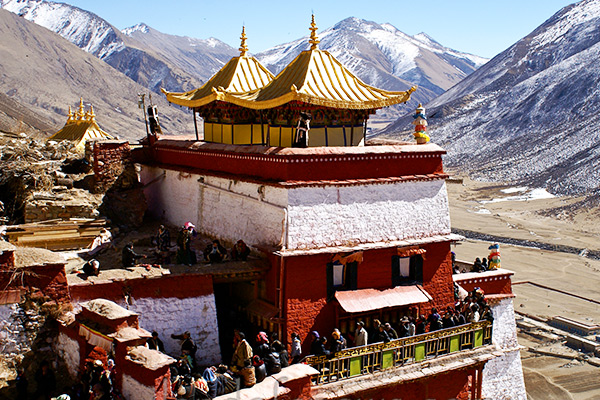 Drigung Monastery is provided with guesthouse for tourists.

The guesthouse at the monastery has dorm rooms for guests and travelers, with two to twelve beds per room. The dorm rooms are basic, with simple beds and mattresses and just a bowl for washing. Toilets are located outside the main building, in an outhouse, and the monks supply hot water for washing and for hot drinks and snacks in thermos flasks. A small on-site shop has basic snack foods such as pot noodles, drinks, and candles for the nights, as there is no electrical supply after a certain time in the evening.

The major highlight of the monastery is the sky burial site, although it is forbidden to actually go and watch this grisly ritual. The monastery itself is a refurbishment of the original monastery, after the main buildings were destroyed by Mongol forces centuries ago. The monastery was rebuilt some years later, and the lineage of monks were allowed to reenter and live there again.

Getting there is a three-hour driver from Lhasa along the G318 National Highway and the S302 Provincial Road, both of which are well paved. Buses leave Lhasa daily and cost around 40 CNY, although for foreign tourists, your guide will take you in the private vehicle supplied.

Located around 110 kilometers to the east of Lhasa city, not far from the Drigung Monastery, lies the Tidrum Nunnery, set in a stunning valley location surrounded by rolling hills. The guesthouse at the nunnery are overlooking the Tidrum hot Springs, which the area is famous for. The rooms are clean and tidy and the beds are basic hardwood with mattresses. Toilets at the nunnery guesthouse are clean Chinese toilets, inside an outhouse outside the guesthouse itself. Food at the nunnery is basic, with a small restaurant offering typical simple Tibetan dishes such as Thukpa. Best to bring some foods to eat if you are not into Tibetan cuisine. 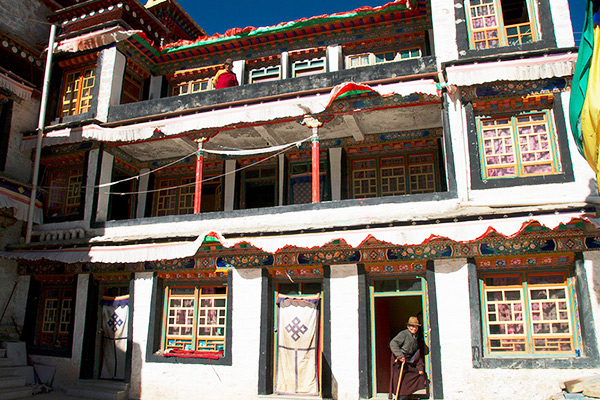 Tidrum Nunnery is mainly famous for the Tidrum Hot Spring nearby.

The Tidrum Hot Springs nearby are said to be healing waters, with magical healing powers. However, they are good mineral hot springs that can help with simple ailments such as arthritis and gastritis and are pleasant and relaxing for any visitor. A great way to heal the soul in such a stunning setting.

Located close by the Drigung Monastery, the same route is used to get to Tidrum Nunnery, and you can include them both at the same time for any visit to the area.

Travel Tips for Staying in the Monastery Guesthouses in Tibet

If you are considering staying in the guesthouses around Tibet, then a few things should be considered before departing. Ideally, take a good sleeping bag with you, as the amount of bedding can vary from season to season and guesthouse to guesthouse. It can still get cold at night, even in the eastern areas of Tibet, and especially at Rongbuk and Mount Kailash.

Follow a few simple rules of Tibetan customs to ensure that you do not offend anyone in the monastery. Do not point the soles of your feet towards statues, altars, and other people, as this is considered to be rude and disrespectful. You should also refrain from touching the heads of Tibetans, especially the monks and novices.