Contrary to what most people think about Tibet, it does not snow there all year round, and in some places, snow is actually quite rare, occurring only in the harshest of winters on the plateau. Even in Lhasa, the Tibetan regional capital, snow is not as frequent as in the western areas where the altitude is higher, and in the Himalayas themselves.

Taking a winter tour of Tibet is, however, the best time to see snow in Tibet, and there are some great places to visit where you can get some great photos, and even trek through the snow-covered landscape. Tibet has a unique charm to it when covered in snow, and with the clear bright skies, the snowy landscape can be just as beautiful as the plateau when it is covered with lush green grasslands. And with winter being the low season for tourism in Tibet, giving some great discounts, if it is snow that you are looking for, then there is no better time to come to the land at the roof of the world.

Why Tibet is Called the Land of Snow

One of the most popular nicknames for Tibet, the “Land of Snows” is an old name, and harkens back to the days when it was believed that the entire plateau was covered in snow all year round. However, this is really only correct when referring to the highest of mountains, such as Mount Everest, Mount Cho Oyu, etc., which are covered in snow throughout the year. 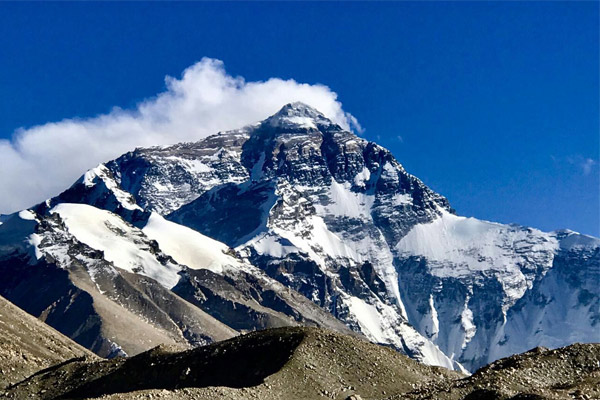 The Mount Everest was covered in snow all year round.

Other ranges, such as the Gangdise and the Nyenchen Tanglha Mountain ranges, which run across the region, also have snow mountains, their peaked capped with snow all year round, which gave rise to the idea that the whole region was always covered in a thick blanket of snow and was almost uninhabitable.

When Does It Usually Snow in Tibet

Winter is the normal time for snow in Tibet, and the best months for snow are from late December through to February. Most of the winter months do not see snow throughout Tibet, but once it gets cold, from late December to early January, then the snow starts to fall, even giving a light dusting in some of the central regions if it gets cold enough.

As you move further west, it is possible to have snow in the earlier part of winter, and in higher altitudes, you can see snow as early as November, which can last until the spring comes in April. There are also many snow mountains in Tibet, revered as sacred by Tibetan Buddhists, where the mountain is capped with snow all year round.

Winter in Tibet is not as inhospitable as many people think, and it can be quite warm in the daytime, even in the depths of winter in many parts of the region. However, once January and February arrive, it is common to see snow in Tibet, and many of the higher latitudes can get heavy snow falls, making it impossible to get to some of the outlying areas of the region.

Where to Enjoy The Snow in Tibet

There are many places where you can enjoy the snow-covered scenery for Tibet tours in winter, mostly in western Tibet, in the areas of western Shigatse Prefecture and throughout most of Ngari Prefecture. Nagqu is at a much higher elevation than Lhasa, and sees snow earlier in the year than most of the rest of Tibet. However, many arts of Nagqu can be impossible to reach once winter sets in, and even Lake Namtso is almost unreachable in the months of January and February.

One of the most popular places to see snow in Tibet, Mount Everest is a snow mountain, covered with snow all year round from around 6,000 meters and upwards. Once the winter sets in, even the base campo can see snow, often as early as November and December. However, despite being covered with a dusting of snow, the base camp is still accessible throughout most of the winter, even into January, unless the winter snows become unusually harsh.

One of the most stunning snow scenes in Tibet, Everest Base Camp (EBC) is a delight, and there is nothing like taking photos of the mountain with the entire scene covered in a pristine white blanket of fresh snow. At an altitude of 5,200 meters above sea level, this popular tourist attraction is one of the best places to visit in winter, and the landscape is even more stunning when the snow has fallen.

Lying out in the Ngari Prefecture of western Tibet, Mount Kailash is well known for having plenty of snow in the winter months, often closing the kora trek due to the heavy snowfall from December to February. One of the best places in Tibet to see the snow-covered landscapes, Mount Kailash is one of the most unforgettable sights in Tibet, a black shard of rock standing tall among the lesser mountains of the Gangdise range. 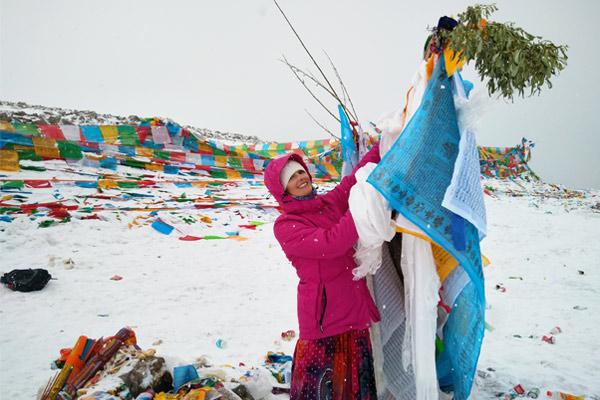 Our client visited the snow-capped Mount Kailash in winter.

While the kora route may not always be accessible for trekking when it snows around Mount Kailash, you can still visit the region, and get some great photos of the world’s most sacred mountain covered in snow. However, with a good layer of snow on the ground, you cannot do the 52-kilometer trek around the mountain.

Some Trekking Routes in central and western Tibet

Western Tibet has several trekking routes that can be done in winter, and even with snow on the ground, it is possible to trek along them. The most popular is the Tingri to EBC trek, which, while even more arduous when it has been snowing, is an awesome adventure, trekking through the snow to the ultimate snow mountain, Mount Everest.

Does It Snow in Lhasa in winter?

Lhasa lies in central Tibet at al altitude of just 3,656 meters above sea level. At this lower altitude, snow is not something that is seen very much in the Lhasa valley area. In the city of Lhasa itself, it may not snow often but it does snow, usually in the depths of winter, in January and February only. A light dusting of snow on the roofs of the Lhasa houses can be seen most years in late January and early February, and it has even been known to snow heavier, leaving a good coating of an inch or so across the entire valley.

Namtso Lake is Inaccessible for The Heavy Snow in Winter

Further north, around Lake Namtso and the mountain areas, it is often covered in snow in the winter months, often cutting off access to the holy Lake Namtso for the entire winter, opening again only in the spring. Lake Namtso lies on the edge of the Lhasa Prefecture area, right on the boundary with Nagqu Prefecture. At an altitude of 4,718 meters above sea level, this increased altitude of the lake area and the high mountains that surround it can often be covered in snow as early as late December, making it impossible to get to the lake as the mountain passes that you need to driver over are clogged with snow.

Pay attention to Snow Blindness when visit the snow-mountain areas

Traveling in the snowy areas of Tibet in winter can actually be more dangerous than you might think. Aside from the fact that it is covered in snow, concealing rocks and crevices in the ground, the most danger in the snowy Tibetan landscape comes from snow blindness.

Caused by the reflection of the intense solar light, similar to looking directly into a very bright lightbulb, only a million times brighter, the bright sunlight can cause what is known as snow blindness, a temporary loss of vision due to overexposure to the bright UV rays of the sun reflected off the snow. The effects of snow blindness are like having sunburn inside your eyes. To prevent it, wearing sunglasses is essential when traveling in snowy areas in Tibet.

Trekking in the winter in Tibet is a popular activity, and while Tibet is not freezing cold all year round, it is very cold in the winter months. If you are trekking or traveling in the outlying areas of Tibet in the winter, such as around Mount Everest or Mount Kailash, then you can expect the nights to get very cold, anywhere around minus ten degrees. Blankets are usually supplied in the guesthouses and lodges, but may not be warm enough for you. A good arctic-rated sleeping bag is a necessity when touring outside Lhasa in the winter months. 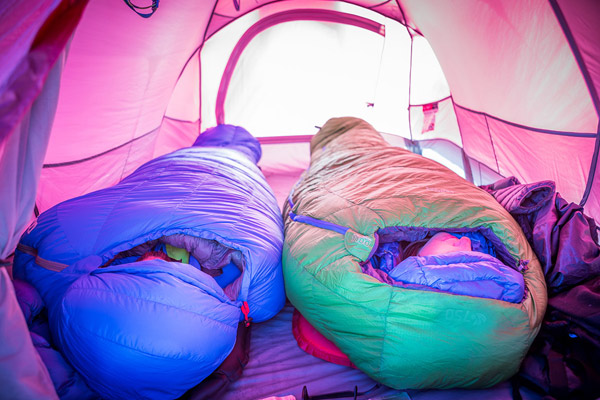 If you are trekking or traveling in the outlying areas of Tibet in the winter, it's better to prepare a good arctic-rated sleeping bag.

What to wear when visit Tibet in winter

While the days can be bright and sunny, they can still be quite cold in Tibet in the winter months from December to February, so it is advisable to wrap up warm to protect from the cold. The best way to stay warm is to pack many thinner tops, and layer them, as this is much more effective for retaining body heat than one or two thicker layers.

Thermal underwear is also a useful addition to your winter wardrobe in Tibet, as they will help to protect your legs from getting too cold, and waterproof winter pants are better than jeans, as they will not let your legs get wet and cold.

Thick socks, strong boots, gloves, and a warm hat are great for keeping your extremities and head warm, especially as the majority of heat lost comes through the head and hands. And if your feet feel cold, the rest of you will feel cold too.