Correct Ways to Present and Receive Hada in Tibet

A very unique tradition found only in Tibet, the Hada, or Khata as it is sometimes known, is presented as a traditional way of showing respect and hospitality to tourists visiting Tibet. The Hada is a long scarf, usually white and made from silk, which symbolizes the purity of the heart of the giver. The Hada itself symbolizes purity and compassion, and is presented on a number of occasions in the Tibetan traditions, from greeting visitors to weddings and other family ceremonies.

The exact origins of the Hada have varying stories. One popular story tells of how the Han Dynasty missionary, Zhangqian, passed through Tibet on a diplomatic mission, and presented silk cloths, prized in China and symbolizing pure friendship, to the local chieftain. Believing this to be a courtesy to build friendships, the tribe turned the giving into a custom. Another myth tells of how the Tibetan king Wangbasi brought colorful silk Hada back from a meeting with Kublai Khan of Mongolia that had “jixiangruyi” in Chinese on it, which means “good luck and happiness to you”. In later years, Hada became synonymous with being the ribbons in the clothes of the fairy maidens, and were given religious meanings.

Presenting Hada in Tibet requires a specific form of presentation, and how it is presented actually depends on who it is being presented to. The presenting of Hada is the most common of all the Tibetan etiquettes, and is meant to show purity of spirit, honesty, sincerity, and respect to those receiving the Hada. And there are several different ways of presenting the Hada, which depend on who you are presenting it to. 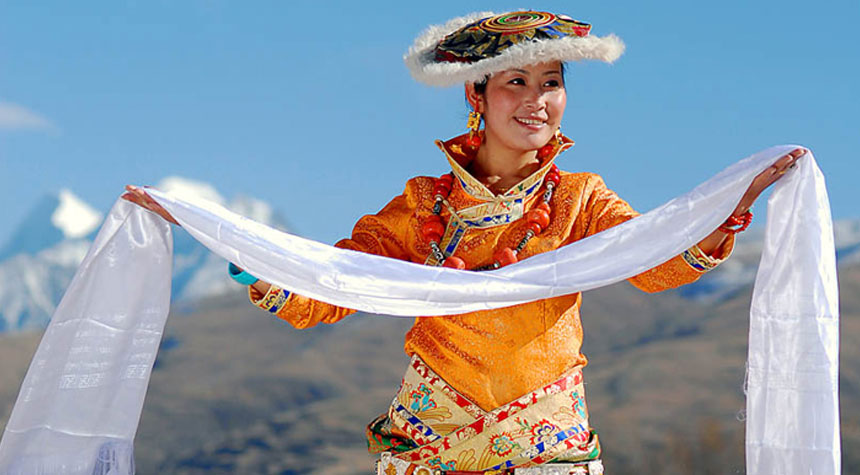 Khata, or Hada, is a traditional ceremonial scarf in Tibetan.

To living Buddha or the elder

For an elder or a Living Buddha, the presentation of the Hada is the most formal and deferential of all, as this is a presentation to what is considered to be a living god. When presenting the Hada, the giver raises the white scarf to the level of his shoulders in both hands, and bows forwards, inclining his head so that it is facing down to the floor, with the Hada level with the top of his head. The Hada is then laid in front of the seat or at the feet of the Living Buddha, who will receive it graciously. Raising the Hada above the head is the ultimate mark of respect in the tradition, and when presenting Hada to elders or the living Buddha, you are showing them your utmost respect and sincerity, showing that the hada is given in honesty and purity. 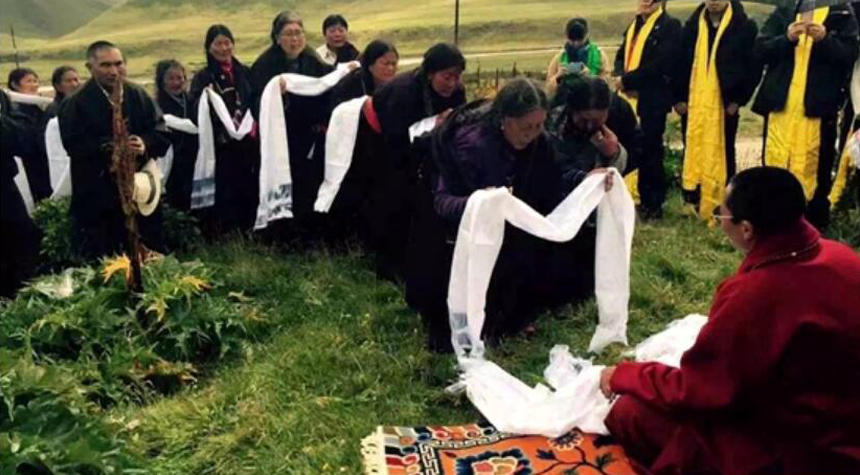 Presenting a Khata to living Buddha in Tibet. 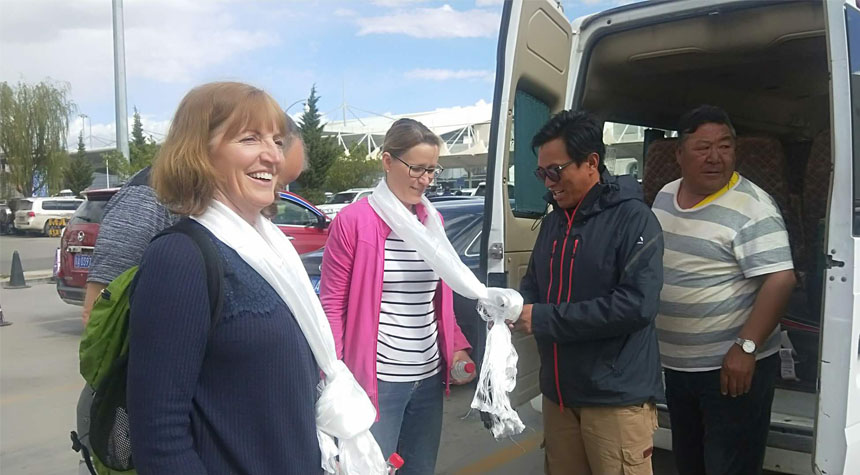 Our Tibetan guide presenting Hada for clients upon their arrival.

The same presentation that is done with friends and people of the same generation is done when presenting Hada to those that are much younger. While this is something that happens less regularly than presenting to same level and older people, it still happens within families especially, and the traditional laying of the Hada around the neck is done. 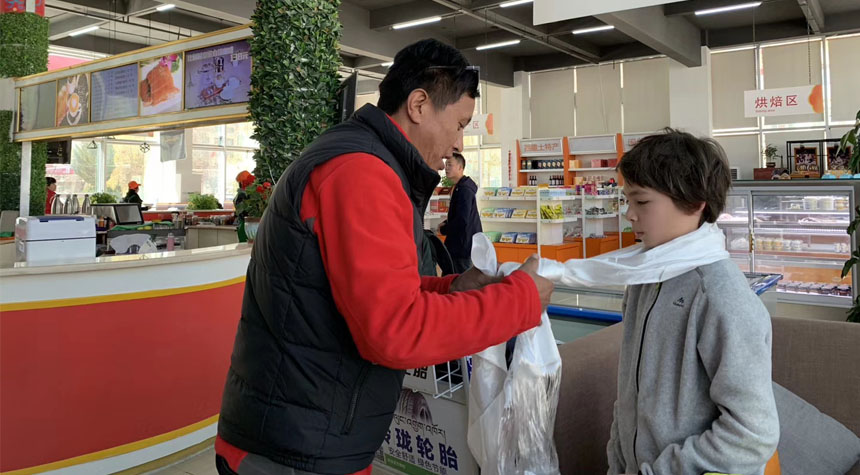 The correct body gesture to receive a Hada

For receiving a Hada in your hands, you should extend them both out at arm’s length, with the palms facing upwards and your head slightly bowed in deference. The giver will lay the Hada onto your palms, with bowed head, after which you should immediately lay the Hada around your neck and wear it during your meeting.

In Tibetan customs and traditions, the Hada, once given, is not put down. The receiver will wear the Hada for the whole duration of the visit of the one who gave it, and not take it off until the guest or visitor has left again, or you have left the meeting. It is actually considered to be very rude to refuse the Hada when offered, and no Tibetan would ever refuse, as this is considered to be an insult to the honesty and integrity of the giver. 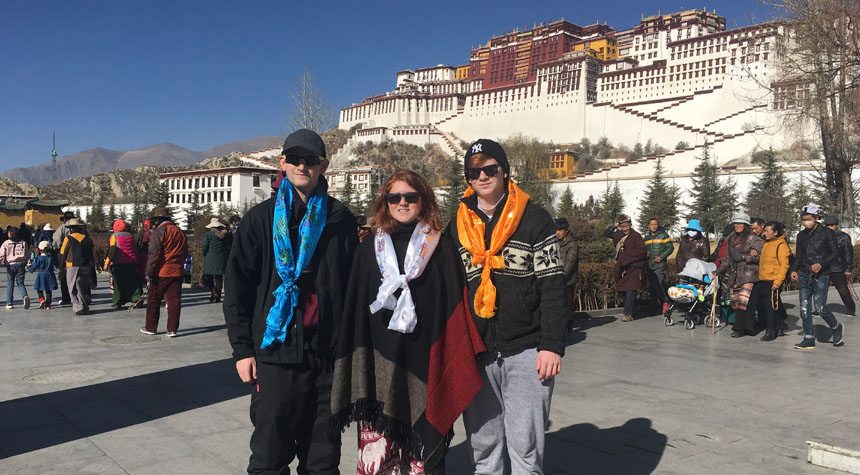 Likewise, it is not done to put the Hada down after receiving it instead of wearing it, and you should take care not to sit on the Hada when you sit down. The Hada are very long, and you should always make sure that, when you sit down after receiving it, that you are not sitting on the ends of the scarf. Simply accept is graciously and wear it for the duration of the time you are with the giver. When you arrive in Tibet, you will receive Hada from your guide, and you can see lots of people in the city wearing them after being presented.

How to deal with the received Hada?

Put it away and take it home

One of the most popular things for international travelers to do with their Hada is to take them home as a souvenir of their trip and to remember the person that gave it to them. And this is a perfectly fine thing to do. Keeping the Hada, putting it away while you travel on through Tibet, and then bringing it home with you to keep forever is respectful to the person that presented it to you, and shows honesty and integrity of your own. The Hada is a gift of respect and hospitality, and to keep it is to show respect for the person that showed you such friendship and hospitality in Tibet. And the Hada does make a great souvenir of your trip to the plateau region.

Tie it to the mountain pass, Mani stones, or other holy sites

Another option for those that want to show respect to the Buddha in Tibetan Buddhism, is to place the Hada at some holy site. Leaving the Hada at a holy religious site is another mark of respect for the site and for the giver, as it means you are passing on the hospitality to the world and the gods. 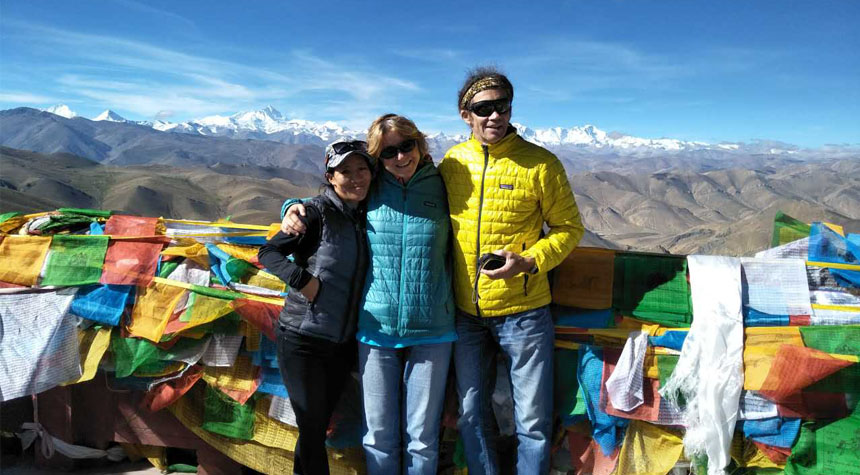 As you travel Tibet, you can see Hada tied to the prayer flags around Tashi Dor Peninsula of Namtso Lake, Gampala Pass to the Yamdrok Lake, and Hada tied to Mani stone walls when trekking around Mt. Kailash and Lake Manasarovar. Many of these Hada have been left here by tourists to Tibet, who want to make their own contribution to giving blessings to the world, and use their Hada instead of prayer flags.

Present it to the throne of Buddha

When entering a sacred monastery or temple for prayer, Tibetans will often leave a Hada behind, presenting it to the Throne of Buddha, or laying it at the feet of the Buddha statue. Often, when visiting a temple or monastery, the pilgrim will present Hada so that they can pray at the statues of Buddha. The Hada is presented in the same way as it would be to a Living Buddha, held in both hands level with your bowed head and laid at the foot of the statue. Hada are also often thrown to the religious Thangka at ceremonies or Tibetan festivals on various monasteries around the region. 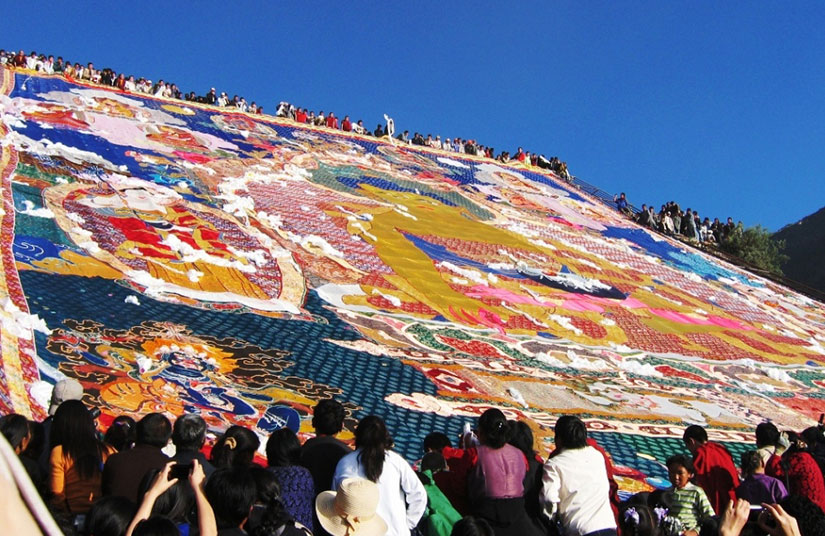 Countless Hadas are thrown to the giant Thangka in Drepung Monastery during Shoton Festival.

Hada are the most common form of greeting in Tibet, and when you arrive in the region, your guide, or the person that collects you from the train station or airport, will present you with a long white Hada as a greeting and to show their friendship and hospitality. Accept the Hada, and enjoy your trip to Tibet, and you will find that these amazing unique people are one of the friendliest peoples in the world.