In the Buddhist land of Tibet, on the roof of the world, festivals and celebrations are a huge part of their way of life. Buddhist celebrations dominate their everyday lives in a way that non-Buddhists can barely even imagine. Dozens of celebrations and festivals, both large and small, are predominant in the Tibetan lunisolar calendar, and throughout the year, none is as popular or as widely celebrated as the Tibetan New Year.

When Is Losar Tibetan New Year

Losar, the Tibetan New Year, is the first day of the first month of the lunisolar calendar, when the first new moon is seen in the sky. The Tibetan lunisolar calendar is based on the lunar cycle, and can consist of either 12 or 13 months, depending on the year. While the dates are somewhat similar to the Chinese New Year, or Spring Festival, they do not always coincide, as the Tibetan calendar is only slightly similar to the Chinese calendar. 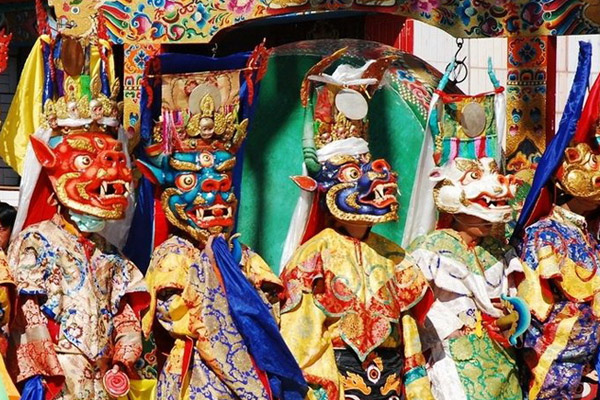 The traditional dance with ceremonial mask during Losar Festival

In 2019, the Tibetan New Year was on February 5 in the Gregorian calendar. However, as with most lunisolar calendars, that date changes annually, and in 2020, Losar occurred on February 24, while in 2021, it is set for February 12. In the Chinese calendar, this can be as little as one day different, or could even be in a completely different month.

Preparations for the festival of Losar begin around two weeks before the date, and start with the cleaning of houses, making or buying new clothes or all the members of the family, and the making of different foods for offering on the family altar. Houses are also decorated with the eight auspicious symbols, as well as many other signs and symbols, either as drawings in white powder or as wall hangings. The local Tibetan monasteries are also decorated with symbols and hangings, and devotional rituals are performed in reverence to the protector spirits.

The wide variety of foods those are present in the Losar celebrations are prepared well beforehand, and are all done before the day comes. The last day of the old year is a time for Tibetan Buddhists to prepare and eat the traditional dish known as "Guthuk". A noodle soup with nine ingredients, the guthuk is eaten on the last day of the old year, and firecrackers are set off, as well as burning grasses and chanting mantras, to drive out the evil spirits of the previous year before the start of the new one. This ceremonial meal focuses on driving out all the negative energy so that the new year and be started in an auspicious and peaceful way. 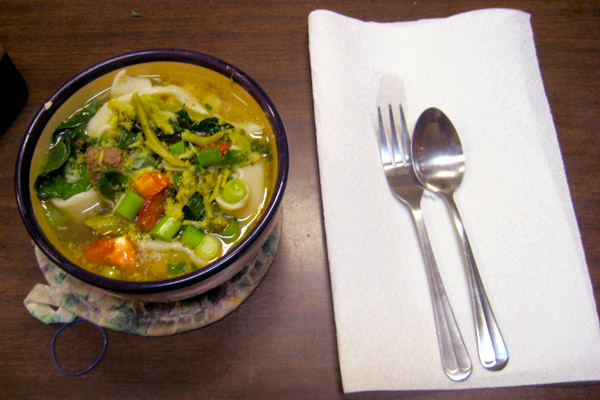 Guthuk is a traditional dish prepared for Tibetan Buddhists on the last day of the year.

The first day of the Losar New Year is when the family greets each other and offers wishes of a good and prosperous year ahead. Known as Lama Losar, it is when offerings are made of barley seeds and tsampa to the home altars, and when the younger members of the family wash the feet of the elders. The families will also visit the monastery or temple to offer up prayers and attend the ceremonies.

King’s Losar is held on day two of the New Year, and was traditionally when the tributes would be offered to the ancient Tibetan kings, and gifts would be given to the people in return. In the modern Losar, this has changed to being a gift and offering greeting with friends and other relatives.

The third day is when the real celebrations start, and often last for up to fifteen days. Across the entire region, a wide variety of festivities are held, including the Weisang ceremony, where pine and cypress branches are burned and the celebrants chant the sutras to pray for peace, good health, and a bountiful harvest. For the rest of the time, celebratory events such as wrestling, horse racing, and many others are performed across Tibet.

The best place to experience the Losar Tibetan New Year in Tibet is in the capital, Lhasa. As the time draws close to the New Year, the city is bedecked with red lanterns, and a strong ambience of festiveness can be felt throughout the entire city. Within the city, there are a number of places to visit to get the best out of the whole Losar experience.

Jokhang Temple, and the surrounding Barkhor Street are the center of celebrations of New Year in Lhasa, and there are many pilgrims walking around the ritual kora out of reverence for the ancient temple. Huge crowds of celebrants, decked out in their finest robes and jewelry, line up around the square to worship at this sacred site for the start of the New Year, to bring more blessings to their families. 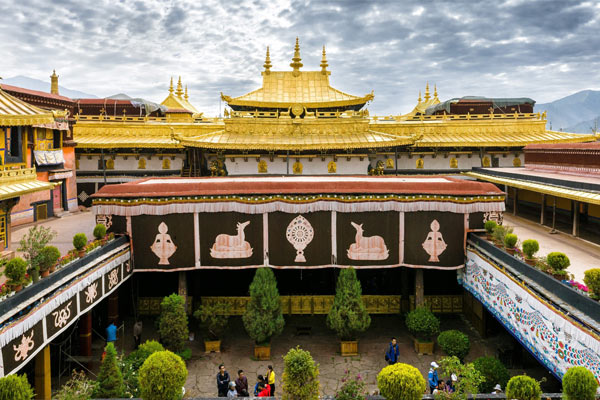 Another amazing experience in Lhasa is the replacement of the prayer flags on the five huge prayer flagpoles that stand in front of Jokhang Temple. The old flags are unwound from the masts, taking care not to let them touch the ground, and lines of flags are tied to the masts and wound around them, similar to the way the ribbons are wound round a maypole. Thousands of pilgrims and locals attend this event, and it is believed that the new flags will send out fresh new wishes and blessings for the new year.

>> Join in our 4 days small group tour in Lhasa to experience the Tibetan New Year with the locals.

Weather of Tibet during The Losar Tibetan New Year Holiday

Climate and Temperature of Tibet in February

February is normally one of the coldest months in Tibet, although it is very dry as well, and the bright sun is normally shining on the people on the first day of the New Year. Temperatures across the region range from 15 degrees in the east and central areas of Tibet, to as low as 2-3 degrees in the west, during the daytime, Nighttime temperatures are much lower, reaching below freezing, even in Lhasa, and as low as minus ten in the western areas of Ngari.

February is the time when it will snow, if the snow is coming that year, and even in Lhasa, there can be some light dustings of snow across the city. However, it can be a pleasant feeling in the bright sun of the plateau, warm enough yet surrounded by a blanket of white snowflakes.

What to Wear when Visit Tibet in Losar New Year Festival

While it may look warm with the sun shining brightly, you can be sure it will be quite cold outside, and you will need to pack plenty of warm clothes if you are visiting Tibet in winter during Losar festival. Layers are the best way to keep warm, as you can always remove or add layers if you are too hot or still too cold. A good fleece jacket is also essential, as it can get even colder as the sun drops below the horizon.

With very few clouds in the sky, the UV radiation is intense in Tibet during the winter months, and a sun hat, sunglasses, and sun cream are essential packing items for your trip. Bring along some gloves and use thick woolen socks to keep your hands and feet warm. Try not to do too much strenuous activity as well, as the oxygen levels in February are around 30 percent lower than in summer, and there is a greater risk of altitude sickness.

Apply for Your Tibet Travel Permit in Advance

If you are planning on a Tibet tour, then you should apply for your tour as early as possible. While you may not be able to stay in Tibet during the period of the Losar celebrations, you can normally take a trip there in the few weeks beforehand. However, this is a very busy time, with a lot of people traveling around the region. Booking your tour early will help with being able to get your Tibet Travel Permit in time.

>> Follow the 4 easy steps to apply for your Tibet Travel Permit online.

Book Your Flight/Train Ticket to Tibet in Advance

The middle of February is normally the Chinese New Year as well, which is known more popularly in China as the Spring Festival. AS one of the two biggest holidays in China, transport in the country can be hard to get at this time, so it is essential that you book your flights and train tickets as far as possible in advance of your trip, to ensure that you can get flights or tickets for the train to Tibet.

With winter being he low season in Tibet, there are fewer places to stay in the region, and especially in the more remote areas outside Lhasa. In Lhasa, however, you may find that the places that are still open have some discounts due to low season price drops, which can make your trip a little cheaper than in summer. However, do not expect to find places to stay at the Everest Base Camp or many of the outlying areas in the depths of winter, as most places are closed for Losar, and for an Everest Base Camp tour, the tent guest houses have been packed up and closed down for the winter months, which means you can only stay in the guesthouse of Rongbuk Monastery.

Winter will also be the time when there are less vegetables available in Tibet, as there are few places where you can grow potatoes, cabbages, carrots, etc. on the plateau. Most of the food will be either yak meat or mutton-based dishes, which are high in proteins, something Tibetans find necessary to survive the winter cold and climate.