Sitting on its high-altitude plateau, ringed by the world’s highest mountain range, Tibet is a land of lakes and rivers, forests and valleys, and a vast number of huge mountains. Of the many mountains that can be found across the region, there are many that are well known, even world famous, and these mountains are among the most popular places to visit for touring international travelers, from the massive heights of Mount Everest and the sacred slopes of Mount Kailash to the holy mountain of Nyenchen Tanglha. Wherever you head in Tibet, you can find holy or sacred mountains, and four of the world’s 14 highest mountains lie in the region.

The most famous mountain in the world, Mount Everest rises 8,848 meters (29,029 ft) above sea level, and is considered to be the peak of mountaineering across the world. Lying right on the border of Nepal and Tibet, the border line crossing over the summit, this vast mountain was unconquered for almost 100 years after its discovery and has claimed the lives of thousands of climbers. 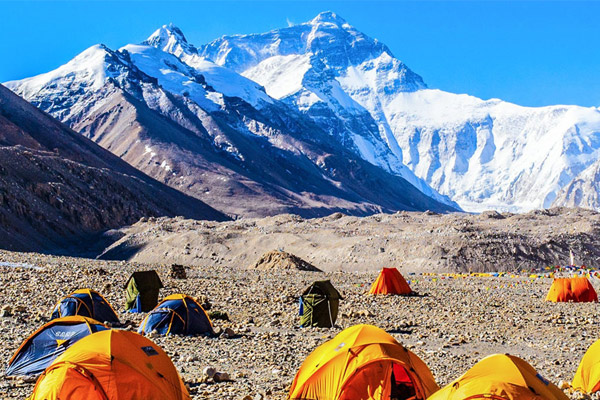 Mount Everest is the most famous mountain in the world with a height of 8,848 meters above sea level.

Known in Nepali as Sagarmatha and in Tibetan as Chomolungma, climbing the mountain is considered to be a feat in the eyes of the climbing community, and many experienced climbers attempt to scale its slopes every year, following in the footsteps of Tensing Norgay and Sir Edmund Hillary, the first people to reach the summit.

Like many mountains in Tibet, Mount Everest has its holy connotations in Tibetan Buddhism. Not only is the summit of the mountain believed to be the home and playground of Miyolangsangma, a Tibetan Buddhist "Goddess of Inexhaustible Giving", where climbers are partially welcome as uninvited guests, but the Sherpa people believe that the slopes of the mountain are blessed with spiritual energy, where the karmic effects of a person’s actions are magnified a thousand-fold, and where impure thoughts should be avoided.

Everest Base Camp Tour – the most popular journey in Mt. Everest in Tibet

One of the most popular tourist destinations in Tibet is the Everest Base Camp (EBC), which is the pinnacle of many Tibet tours. For majority of tours that head outside Lhasa to the western regions of Shigatse Prefecture, Mount Everest Base Camp is the main attraction, and thousands of tourists travel the route to the mountain every year. 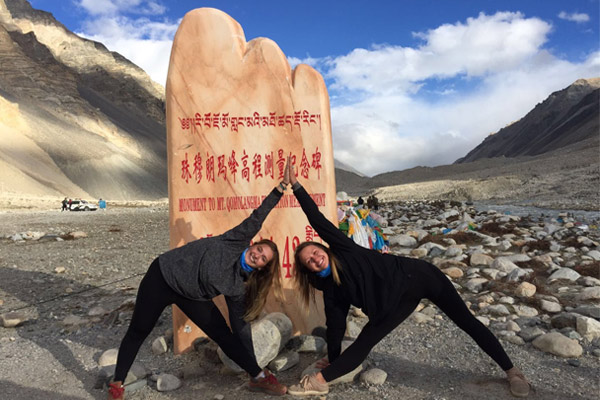 It is so thrilling to take an Everest Base Camp tour.

An Everest Base Camp Tour usually starts in Lhasa, though you can travel overland from Kathmandu to visit the mountain as well. Taking in the stunning sights and scenery of the Tibetan plateau along the route, travelers ride from the Tibetan capital in a long, exciting, adventurous tour of the region, culminating with a visit to Everest Base Camp and the sacred Rongbuk Monastery, which lies at the foot of the massive mountain.

Known as the most sacred mountain in the world, Mount Kailash is revered in four separate religions, and is one of the few mountains in the world over 6,000 meters that has never been climbed. For Hindus, Buddhists, Jains, and the Bonpo, the mountain is either the center of the universe or the earthly abode of a great god, such as Lord Shiva. Located in the west of Tibet, in Ngari Prefecture, this vast pyramid-shaped mountain is another popular tourist location, as well as the most popular pilgrimage destination in Tibet. 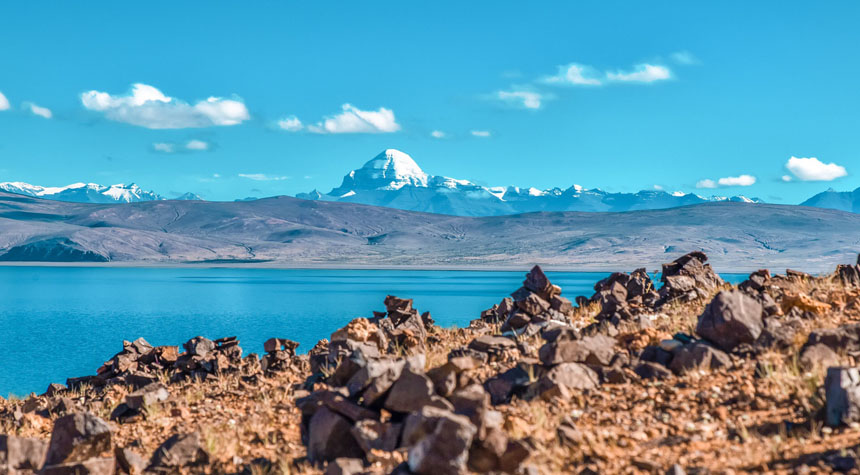 Mount Kailash is known as the most sacred mountain in the world and has never been climbed.

Renowned for its sacred status, the mountain is surrounded by myths and legends, and in Tibetan Buddhism, it is the site where the Buddhist sage, Milarepa, defeated the champion of the Bon religion, Naro Bon-Chung, for dominance over the people of the region. Known as Kailāsa in Sanskrit, Gang Rinpoche in Tibetan, and the Nine Stacked Swastika Mountain by the Bonpo, Mount Kailash is the site of one of the greatest pilgrimage koras and treks in the world.

As a sacred mountain, the slopes of Mount Kailash have never felt the tread of mankind, and likely never will. While attempts have been made to start an expedition to the summit, none has ever succeeded, with the earliest surveys and climbing expeditions put off by sudden and unusual storms around the area of the mountain. The last expedition planned to scale this sacred peak in 2001 received international backlash for their expedition plans, and the Chinese government denied them the chance to make the climb, stating that the sacred mountain was prohibited from being scaled.

One of the most important pilgrimage koras in the world, and one of the world’s best treks, the sacred ritual kora route around the base of the mountain is as close as any human can get to its slopes. Starting from the small town of Darchen, to the south of the sacred mountain, the trek takes you along the southern foothills to the start of the valleys that surround the mountain, and across one of the highest passes in Tibet, Dolma La, at an altitude of 5,500 meters. 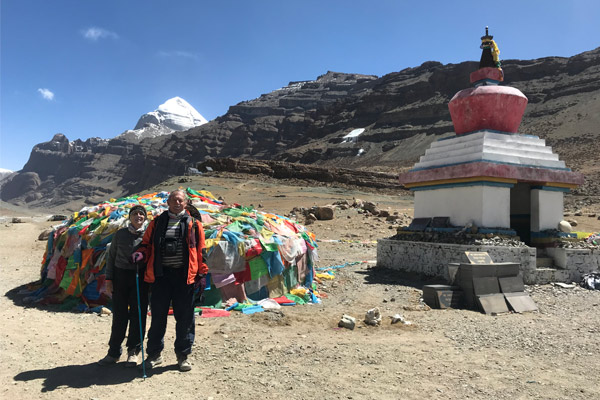 Taking a pilgrimage trip to Mount Kailash is a lifetime experience.

The kora route, which takes three days to trek around, covers a distance of 52 kilometers over some of the plateau’s harshest terrain. And a classic Mount Kailash tour from Lhasa takes about 15 days in total. The kora around the mountain can only be done on foot or by riding ponies or yaks, passing by and staying at several sacred monasteries along the way. Drirapuk and Dzultripuk, two of the five monasteries surrounding the mountain, are stopping points for tourists and pilgrims alike, and provide basic accommodation along the trail for those brave souls making their journey around the sacred mountain.

Lying in the western part of the Nyenchen Tanglha Range, Mount Nyenchen Tanglha is the highest peak in the range, at an elevation of 7.162 meters. Part of the vast range is known as the Transhimalaya, which includes the Gangdise Mountains, and stretches across the middle of the Tibetan plateau. The range lies on the watershed between the Changtang Plains to the north and the Yarlung Tsangpo River to the south. Located in the Lhasa prefecture-level city, this stunningly beautiful mountain is the highest mountain close to the Tibetan capital. 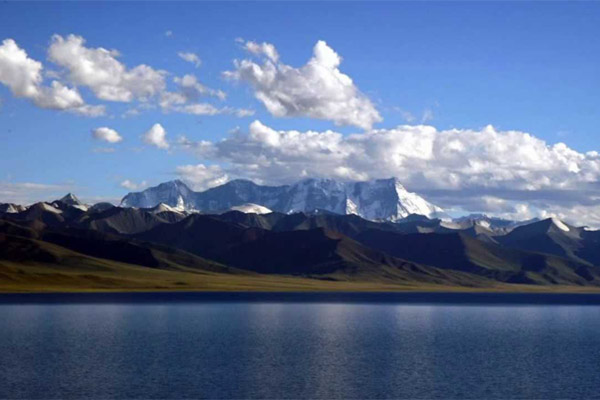 The best view of Nyenchen Tanglha Mountains you can get is on the road from Lhasa to Lake Namtso.

Formed by three summits, all above 7,000 meters, Nyenchen Tanglha is the highest mountain in the Transhimalaya, and its highest summit was the first to be climbed, in 1986, followed by the other two in 1989 and 1995 respectively. The mountain is also a sacred mountain in Tibet, and in Tibetan mythology, it is believed to be the most influential deity in most of northern Tibet. Considered as being a bodhisattva of the eighth level in Tibetan Buddhism, Nyenchen Tanglha is depicted in his mortal form wearing a robe of satin and carrying a whip and Buddhist rosary in his hands, riding a pristine white stallion. The protector of the Nyingma Tradition of Tibetan Buddhism, he has been the subject of countless fairy tales and legends in Tibetan folklore.

The best way to get a good view of the Nyenchen Tanglha Mountains is on the road from Lhasa to Lake Namtso, one of the Great Three Holy Lakes of Tibet, which lies to the north of the mountains in Damxung County of Lhasa Prefecture. In order to get the sacred lake, one has to cross the high passes of the mountain range, and as you come closer to the mountains, the panoramic vista of the Nyenchen Tanglha Mountains makes a spectacular sight. From the passes that cross the range, many of the highest peaks of the range can be seen, including that of Mount Nyenchen Tanglha itself.

>> Join in our 6-day Lhasa to Lake Namtso small group tour to witness the amazing Nyenchen Tanglha Mountains and the holy lake.

The sixth highest mountain in the world, Mount Cho Oyu lies on the border between Tibet and Nepal, and stands at a height of 8,188 meters above sea level. In Tibetan, Cho Oyu means “Turquoise Goddess”, and the mountain is believed to be the sacred home of one of the major deities of Tibetan Buddhism. Lying in the westernmost end of the Khumbu Region of Nepal and the most southwestern end of Shigatse Prefecture in Tibet, Mount Cho Oyu is just 20 kilometers from Mount Everest, and provides some great views of the world’s highest mountain. 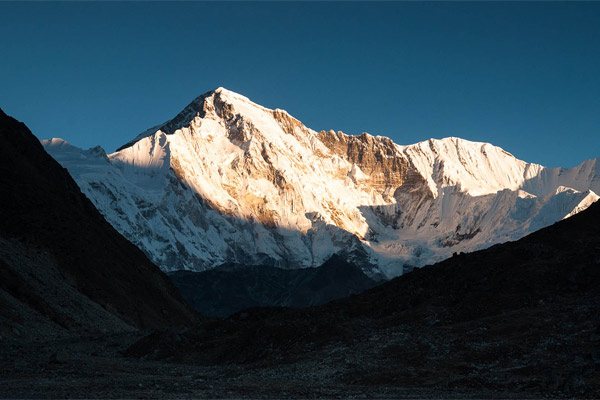 Mount Cho Oyu lies on the border between Tibet and Nepal at an elevation of 8,188 meters above sea level.

Just a few kilometers west of the peak lies the Nangpa La Pass, the main trade route between Tibetans and Khumbu Sherpas, and is the route for Sherpa pilgrims making the trek to Rongbuk Monastery in Tibet for their annual pilgrimage.

The fifth 8,000-meter mountain to be climbed in the Himalayas is Cho Oyu Mountain. The first attempts were by Hillary himself, though it was Herbert Tichy who made the first summit of the mountain in 1954. Considered as one of the easiest of the eight-thousander mountains to climb, Cho Oyu is the second most climbed mountain in the Himalayas, after Mount Everest, and is considered to be a great training and trekking peak. As one of the easiest mountains, Cho Oyu is a popular location in Tibet and Nepal for guided trekking parties along its moderate slopes.

As the easternmost peak over 7,000 meters in the entire Himalayas, Namche Barwa is the traditional eastern anchor of the Himalayas, which originally was thought to extend only from the Indus to the Brahmaputra Rivers. Lying in an isolated area of Tibet rarely visited by tourists to the region, Namche Barwa lays inside the Great Bend of the Yarlung Tsangpo River, at the point where the river enters its famous gorge, the biggest river gorge in the world. Its sister peak, Gyala Peri, rises 7,294 meters above sea level across the span of the river valley, 22 kilometers away, marking the other side of the entrance to the gorge. 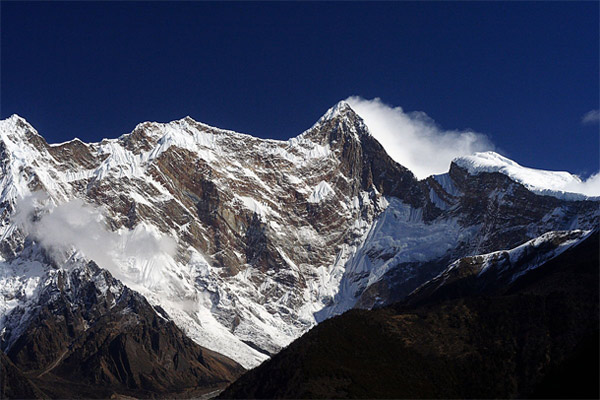 Namche Barwa lays inside the Great Bend of the Yarlung Tsangpo River.

Tibetan legend has it that a prophecy exists around the mountain among the Kongbo Tibetans that live in the area. The prophecy states that, one day, Namche Barwa will fall into the Yarlung Tsangpo River Gorge, completely blocking the flow of the river. The river will then turns aside from the dam, and flow over the Doshong La Pass and into Bome County of Nyingchi Prefecture.

One of the holy Snow Mountains of Tibet, Namche Barwa is a great place to visit, and there are treks that lead from Samye and Tsedang that follow the route of the Yarlung Tsangpo River, reaching the village of Lusha at the bend in the river where the mountain is located. The route also heads up to the base of the mountain, through the forested Pei region, ending at the original base camp of the expedition that reached the summit. While the base camp is not that high, at only 1,600 meters, it provides great views of the snow-capped peak of the mighty Namche Barwa Mountain.