What Etiquette and Taboos do I Need to Know before Taking a Tibet Trip?

Tibet is a unique land of customs and religious beliefs, and these beliefs have influenced Tibetan people deeply. When traveling Tibet, there are certain taboos and forms of etiquette in this high-altitude region that you should know about. As they say, “When in Rome…”

Etiquette and taboos in daily life

The etiquettes and taboos of Tibetan customs and religion often extend into their daily lives, as both custom and religion are tightly intertwined within the culture of the Tibetan people. This means that there are certain things you will need to know in order to not make those cultural or religious faux pas that could be more than a little embarrassing. The major taboos within Tibetan daily life can be confusing at first, but with a little knowledge, you can be as respectful as you want to be when traveling in Tibet. 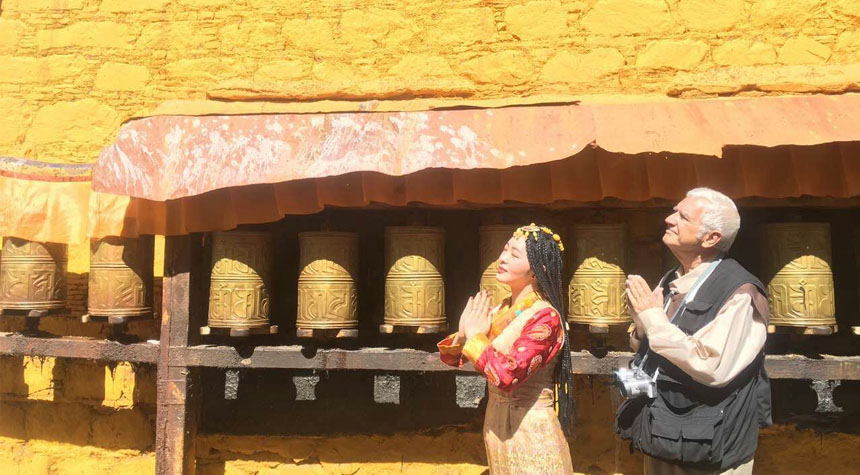 When circumambulating monasteries or holy sites in Tibet, please follow the clockwise direction.

One of the main things you should understand in Tibet is that almost everyone in the region is a devout Buddhist. And in Tibetan Buddhism there are some things that you really should not do when wandering around the streets of Lhasa, or any other city or town in the region. The first thing to think about is touching people’s heads. While this may not be a problem where you come from, in Tibet it is considered rude as the head is sacred in Tibetan Buddhism. And if you come across Tibetans prostrating, either in front of a temple or along the road as they travel on their pilgrimage, you should never disturb them. Even traveling has its taboos in Tibet, and you should not raise your voice or shout when crossing mountain passes or walking alongside holy lakes.

Socially, there are a huge number of taboos in Tibet, and it can pay to know what they are and why they are taboo. Culture in Tibet is reserved, and you should understand that the normal things you may not think about are often restricted. It is important to remember that Tibetans do not kill animals for food, though they will eat beef and mutton that is sold already slaughtered. Tibetans do not eat the meat of cats, dogs, horses, donkeys, and any other animals with round hoofs or sharp claws. And in most places, they do not eat fish either. It is important to accept and understand the taboos on food, to prevent mistakes being made. 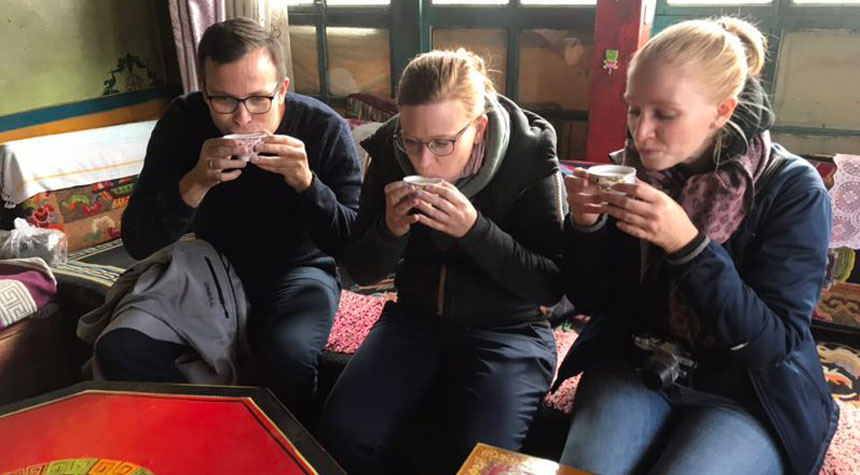 Holding the cup with both hands shows your respect to the Tibetans.

Other dining etiquette includes accepting a bowl of food or drink with both hands together; do not step over kitchenware or food of another; do not spit or clap hands behind another diner; when eating, it is expected to eat quietly with closed mouth and not talk while chewing; and you should never turn the bowl upside down, as this is only done with the bowls of dead people. And whether dining or not, you should never extend your legs so that the soles of your feet face towards another person.

Social etiquette is just as important in Tibet, and your behavior is expected to be the same as the locals. For elders, you should add “la” after their name when addressing them, and avoid rushing in front of elders and monks when walking the streets. And do not be surprised if they poke their tongues out when greeting you. In Tibet, having a black tongue is the sign of demons, so they show their tongue to prove they are not demonic. Breaking wind is also considered to be ill-mannered and impolite in Tibet, so it is best not to do so in front of others. It is also taboo to whistle indoors or at night, as they believe that this will attract nocturnal spirits and ghosts. 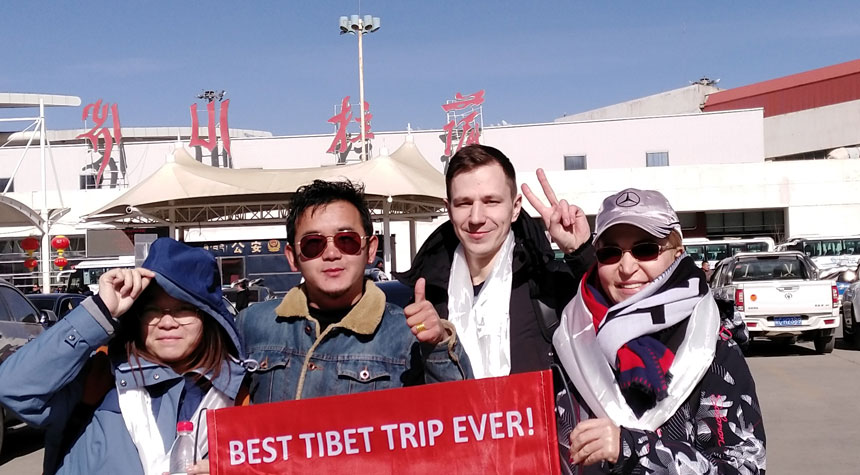 Accept Hada with both hands and lay it over your shoulder when it is presented.

Another important aspect of the social etiquettes of Tibet is the giving and receiving of Hada, the long white scarves that are given as gifts. During many of the Tibetan ceremonies, such as weddings, the arrival of visitors, etc., Tibetans give Hada to express their best wishes. When presenting a Hada to a senior or altar, you should raise it above your head and lay it at their feet. And when receiving it from someone, you should accept it with both hands and lay it over your shoulders.

Etiquette and taboos when visiting monastery in Tibet

Buddhism is the major religion in Tibet, and the Tibetan people are almost all devoutly religious. When visiting the monasteries and temples of Tibet, there are some rules that you should take care to adhere to, as some could result in your being refused entry or even asked to leave.

The first thing is to dress appropriately. Women should not wear shorts or short skirts, and all visitors should ensure their shoulders are covered to the upper arms, with no low-cut tops for women. Modesty is the best rule when visiting a monastery, so remember to cover up. You should also remove headgear and sunglasses when entering the temples, and this should include your own spectacles if they are darkly tinted. Bring a pair that are clear for indoors. And while it is normal for Buddhists to remove their shoes in monasteries and temples, this is not always expected of tourists, so check with your guide. 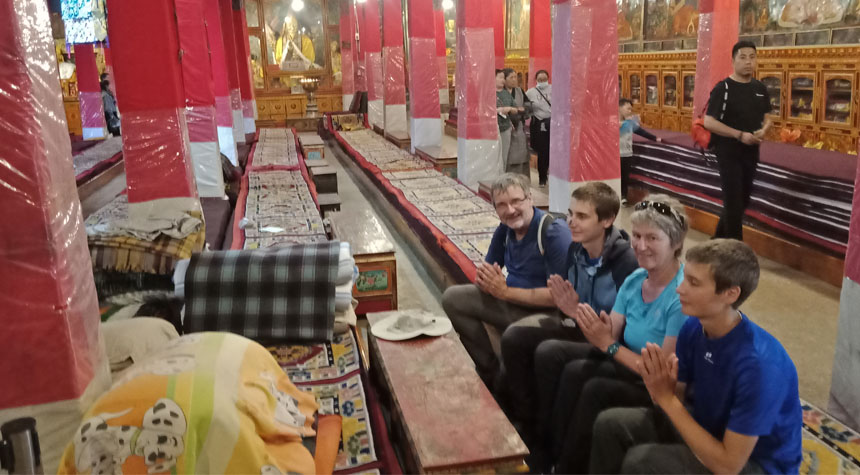 You can consult your tour guide in advance or do what the local Tibetans do when visiting monastery in Tibet.

While inside the monastery, you should always respect the sanctity of the building and be quiet, especially when monks are praying. And the correct way to greet a monks or lama is to hold your hands together in front of your chest and lower your head. Please do not touch the statues, relics, holy objects, and prayer flags that you will find inside and around the monastery. And taking photos inside the monastery is generally taboo, but some monasteries will allow it, as long as you do not photograph the statues of Buddha and the altars.

If you are performing a kora trek around Mount Kailash, monasteries, or other sacred sites, then remember to walk around the site in a clockwise direction. Buddhist pilgrims always pass holy sites walking clockwise, whereas Bon devotees will circle sacred Bonpo sites in an anti-clockwise direction. To go the wrong way would be disrespectful to their Buddhist religion.

Other small but useful things you can do for Tibetans

Following the taboos of the region is not the only thing you can do for helping and respecting the Tibetan people. If you want to make a contribution to the people of Tibet, especially the children, then it is best not to just donate money. Ideally, you can bring some items to donate to the schools for the children, such as stationary, books, pencils, etc. This can help with their education in a much better way than just giving money, which may or may not reach the kids it was intended to benefit. 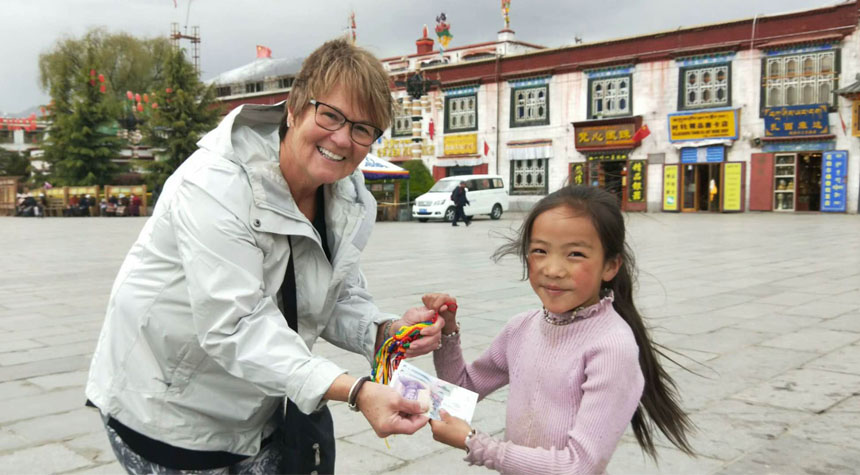 It is a good idea to support Tibetans by buying handicrafts from them.

Another way to make things better for the Tibetan people is to buy the local crafts or farm product from Tibetan craftsmen or farmer directly. Tibetan handicrafts are highly prized outside Tibet, and make a great souvenir of your trip to the plateau. Farm products can also be bought from many of the farm shops across Tibet. The purchase of crafts and farm goods helps the local economies, gives income to the people directly, and aids in keeping the Tibetan workers out of poverty.

Tibet has a lot of customs and taboos when it comes to etiquette, and there are too many to list here in one go. Some are even obscure, and only present in certain areas of the Tibetan plateau. If you are in any doubt, or are not sure if there is a taboo for something you plan to do or say, check it with your Tibetan guide, who will be able to guide you on the correct etiquette for the situation.

0 Comment ON "What Etiquette and Taboos do I Need to Know before Taking a Tibet Trip?"