What is the Best City for Entering Tibet from Mainland China

There are many ways in which you can enter Tibet, from China by flight, train, and overland, as well as from Nepal by flight or overland. Most people, however, choose to travel from mainland China to the roof of the world, and for many good reasons.

With seven gateway cities for the trains to Tibet, as well as multiple airports across the country and three good overland routes there are many good reasons to choose mainland China as your departure location to get to the Tibetan capital of Lhasa.

However, China is really a huge country, with many cities offering trains and flights to Tibet. Which is the best city for entering Tibet? How to choose the best gateway city for your Tibet tour? Here we will introduce you some of the most popular cities to start your Tibet journey from mainland China. 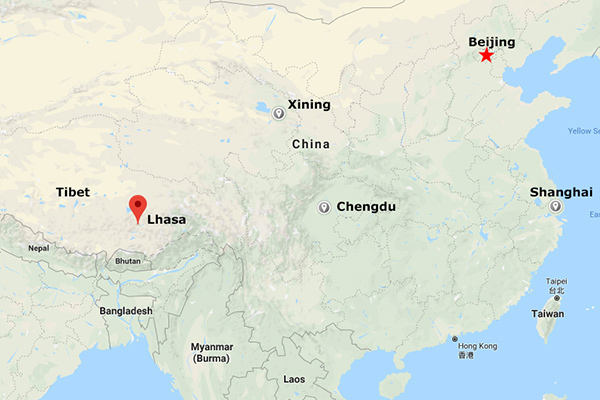 Map of Lhasa in Tibet and Major Gateway Cities in China

Lying on the eastern coast of China, Beijing and Shanghai, always being the first stops for most tourists coming to China, are popular locations from which to start a Tibet tour. As two of the most popular tourist destinations in China, these two huge cities are often visited as part of a longer China Tibet tour, incorporating either Beijing or Shanghai before heading on to Tibet. With so much to see and do in both Beijing and Shanghai, there are more tourists visiting these two cities together every year than in the rest of the country as a whole.

Reason 1: The Gateways of China with Frequent International Flights Connecting with the World

Beijing and Shanghai are also both major international destinations for flights from around the world. Beijing Capital International Airport, the main hub for the Chinese national airline, Air China, is the largest airport in China and the busiest in Asia in terms of passenger transport, as well as the second busiest passenger airport in the world. 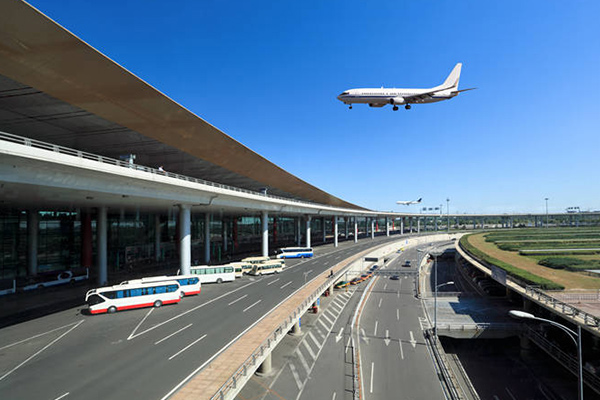 Beijing is one of the major international destinations for flights from around the world.

Reason 2: Both of Them Offer Daily Trains and Flights to Lhasa, Tibet

Not only are they popular cities for Chinese tourism, but they are also major gateway cities to Tibet for the trains that run daily to Lhasa. Crossing the entire country, the Tibet train heading for the Tibetan regional capital via Xining, the starting point of the famous Qinghai Tibet Railway, takes around 40 hours from Beijing and just over 46 hours from Shanghai.

While this may seem like a long ordeal, traveling for almost three days across the whole of China, It is a relaxing and pleasant journey, with comfortable cabins, god cuisine, and a delightful view of the Chinese towns and countryside out of the large windows. Moreover, it is also an amazing experience as you head up to the plateau from Golmud in Qinghai Province, cresting the high mountains and crossing the vast expanse of the Tibetan plateau to Lhasa.

As well as trains to Lhasa, Shanghai and Beijing also offer flights to the Tibetan capital, although neither offer direct non-stop flights. While their flights are direct, they normally stopover in one of the other airports with connections to Lhasa Gonggar International Airport.

Chengdu, in Sichuan Province of Southwest China, is one of the most popular cities from which to depart for Tibet. Another popular local destination for tourists to China, the city has a lot to offer its visitors, and is the location of the world-renowned Panda Research Center, which breeds and rears the rare giant panda for release back in to the wild.

Reason 1: Chengdu Offers the Most Non-stop Flights to Tibet

Chengdu Shuangliu International Airport is the major airport serving Sichuan Province, and is a major international hub or flights from across Asia, as well as receiving flights from further international locations, such as Abu Dhabi, Addis Ababa, Amsterdam, Dubai, London, Los Angeles, Madrid, Melbourne, Moscow, New York, Prague, Paris, San Francisco, Sydney, and Vancouver. The airport is also one of the major hubs for Air China, the Chinese national airline. 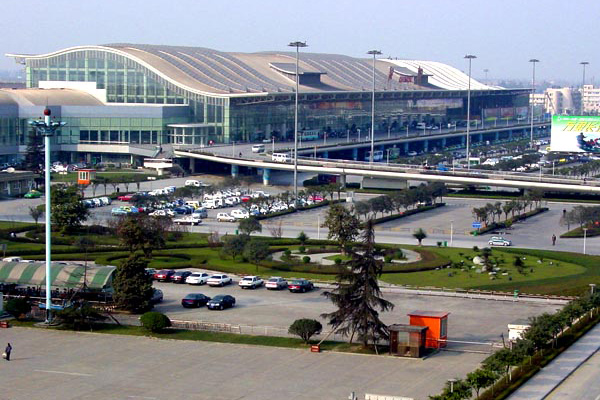 Reason 2: There is One Tibet train departing from Chengdu to Lhasa

Chengdu is one of the seven gateway cities to Tibet for the Tibet trains. Trains to Tibet from Chengdu take around 36 hours to get to Lhasa, which is still not yet the shortest of the seven routes. The trains are a popular way of traveling to Tibet, and the views of the Tibetan landscape after cresting the high Tanggula Pass are some of the most spectacular in the world.

The trains from Chengdu to Lhasa do not depart daily, however, and are listed as every other day. While this can be confusing in some places, at Chengdu they have made this “every other day” system a little simpler. Depending on the month, the trains leave on either the even or odd days of the month. For example, the trains on odd days depart on the 1st, 3rd, 5th, etc., while the even months depart on the 2nd, 4th, 6th, etc. This system is also in place in Chongqing, though the other cities with “every other day” departures have yet to adopt this system.

Reason 3: The Most Beautiful Overland Route to Tibet is from Chengdu to Lhasa

For those that want to make their trip to Tibet an even bigger adventure, a Tibet overland tour from Chengdu to Lhasa is the best choice. Following the route of the G318 National Road, which runs for 5,476 kilometers from Shanghai in eastern China to Zhangmu in Tibet Autonomous Region, on the border with Nepal.

Running for over 2,000 kilometers from the Sichuan Capital of Chengdu to the Tibetan capital of Lhasa, this amazing journey takes its travelers through some of the most amazing scenery in southeast Tibet, including the stunning sights of Nyingchi, the lowest prefecture in Tibet in terms of altitude. There are actually two separate routes to take along this road, the northern and southern routes. Although both have amazing scenery along the way, the southern route is the more popular, although also the more dangerous, due to the lower quality of the roads through the mountains. 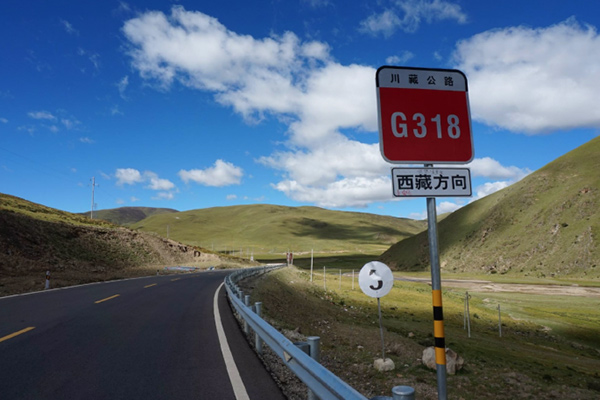 One can travel overland from Chengdu to Lhasa along the scenic G318 Road.

This exciting adventure is not one that can be done alone, though. Driving in China requires you to have a local Chinese driving license, which is only available to Chinese citizens. And driving in Tibet is also only allowed for Chinese nationals, as is any form of independent travel in the region. For foreign tourists intending to take the Sichuan Tibet highway to Lhasa, they would need to book a tour with a registered tour operator capable of providing the service for both Sichuan and Tibet, such as Tibet Vista.

Xining, in Qinghai Province of China, is the start of the world-famous Qinghai Tibet Railway, the first rail link between mainland China and the Tibet Autonomous Region. Located at an altitude of around 2,275 meters above sea level, this unique city has more train tickets to Tibet per year than any other city across China. Despite only departing for Lhasa every other day (and not using the system of odd and even days as in Chengdu), the trains from Xining are longer, with more carriages for hard sleeper and soft sleeper berths. On average, each train from Xining carries more than twice as many passengers than any other train from the other six gateway cities.

Reason 1: The Shortest Train Journey to Tibet with the Most Essential Parts of Qinghai Tibet Railway

The trains to Tibet from Xining are also the shortest in terms of time and distance. With a total traveling distance of 1,972 kilometers, the Xining-Lhasa train takes just under 22 hours to cross the high Kunlun and Tanggula mountains and traverse the vast Tibetan Plateau. For travelers on this train, there is a much more pleasant experience during the journey. The trains leave Xining in the afternoon, which means that they reach the heights of the plateau just as the sun comes up, so passengers can sleep through the night and not miss any of the amazing sights of the journey across Tibet. 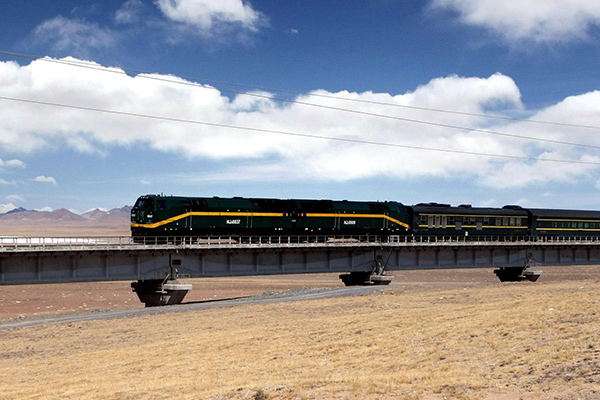 The train from Xining to Lhasa covers the shortest distance to Tibet.

Reason 2: Connected with Lhasa and Other Major Cities of Mainland China by Flight Network

There is also the option of getting a flight to Lhasa from Xining Caojiabao International Airport. There are currently between four and six flights per day from Xining to Lhasa Gonggar International Airport, which take around 2 hours 20 minutes to cover the distance. Despite only being a relatively small airport, Xining receives flights from all across China every day, as well as from Hong Kong and Taiwan.

Best Way to Go: Get to Xining First and Take the Xining-Lhasa Train to Tibet

It is highly recommended to start your Tibet tour from Xining by getting to the city first and joining the train from there, instead of starting at your inbound destination in China. Xining has dozens of convenient flights to the other major cities in China, including Beijing, Shanghai, Guangzhou, and Chengdu, and all trains from the other six gateway cities to Tibet pass through Xining Railway Station on their way to Lhasa. There are also a large number of standard trains that make the trip to Xining, which can be used to get to the city for your connecting train to Tibet.

More Choices for You to Get to Tibet

As well as Xining, Chengdu, Beijing, and Shanghai, you can also get the train from Lanzhou, Chongqing, and Guangzhou. Guangzhou is the furthest of all the seven gateway cities for Tibet, taking more than 55 hours to cover the 4,980 kilometers to the Tibetan capital.

From Chongqing and Lanzhou, the trains leave every other day, and take 35 hours from Chongqing and 24 hours from Lanzhou. The trains are the same type as all the other trains from the gateway cities, although not as popular with foreign and domestic tourists to Tibet, except in the peak season from June to September.

There are also three other overland routes to Tibet from China, although they are not always available for travel by foreign tourists and do require a booked tour of Tibet in order to take the trip when available. The routes run from Xinjiang province in northwest Tibet, from Yunnan Province in southwest Tibet, and from Xining in Qinghai Province. The route from Xining is normally open for foreign tourists with a booked tour, and follows the old Qinghai Tibet Highway, which runs alongside the Qinghai Tibet Railway for most of the journey. The original route to Tibet for travelers and goods, this highway is the best route to Tibet for overland travel, and the road is well paved for its entire length.