Distance from Beijing to Lhasa and how to get there

Lying on the northeastern coast of China, Beijing is the nation’s capital and one of the largest cities in the country. The most populated capital city in the world, Beijing has a wealth of history behind it, giving it an awe-inspiring aura of ancient and modern mixed seamlessly together.

Beijing is a popular entry point in China, and as the first gateway city to Tibet when the Qinghai Tibet Railway first opened in 2006, it has remained one of the most popular starting points for train travelers and flights to Lhasa. With inbound flights from all around the world on every continent, the Beijing Capital International Airport is the main hub for the nation’s flagship airline, Air China, and is the world’s second busiest airport for passenger transport. 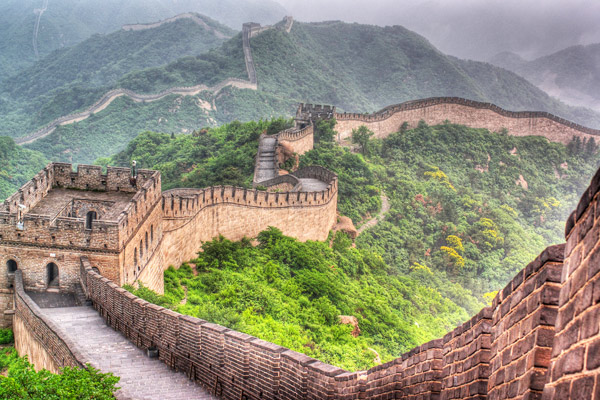 The Great Wall, one of the seven wonders of the world.

More than 95 million people pass through Beijing Capital International Airport every year, and a good number of those are heading for Tibet. And with options on getting to Tibet from Beijing, it is one of the most popular choices for western tourists traveling to the plateau region.

The flight from Beijing to Lhasa takes around 5 hours 40 minutes to cover the 2,566 kilometers. Air China is the only carrier that has a direct flight to Tibet, which leaves daily at around 7:30am. However, this flight being direct, is the most popular flight to Lhasa, and is often fully booked well in advance of the actual flight date.

However, the cost of this direct flight is high, starting at around US$ 500 for a single economy ticket to Lhasa. Indirect flights from Beijing to Lhasa are much cheaper, but only in the off season for Tibetan tourism. A peak season indirect ticket can cost as much as US$ 600, while in the low season, it can be as little as 300 dollars for the same flight.

Connecting flights to Lhasa from Beijing normally stop off in either Chengdu, Chongqing, or Xi’an, and the flight can take from 7-8 hours to as much as 12 hours if the layover time is longer. There are few options for budget airlines to Tibet from Beijing, since only a Chinese-owned airline can offer flights there. If you are planning to travel to Lhasa from Beijing and return to Beijing after, it can work out a lot cheaper to buy the return ticket with the same airline, as this can sometimes prompt a little higher discount.

The distance from Beijing to Lhasa by train is a lot more than the 2,566 kilometers that is the direct flight route to the Tibetan capital. By train, the track to Tibet from Beijing is a whopping 3,757 kilometers long, the third longest of all the train journeys to Tibet. Taking the train to Tibet takes around 40 hours from Beijing, leaving at around 8:00pm and arriving at approximately 12:20pm on the third day. 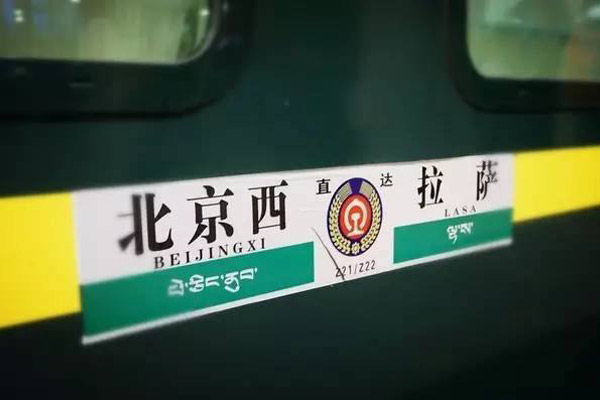 The Tibet Train from Beijingxi to Lhasa.

Getting the train to Lhasa from Beijing in the peak season would probably mean booking as early as possible to try and get a ticket. Trains in China open the ticket window 60 days before the date of the ticket for travel, and in the peak months of summer, trains book out extremely fast, sometimes in as little as one day. If you are looking to travel to Lhasa from Beijing by train in the peak tourist season, then you should be a little flexible about your dates for getting the train, to give you a better chance of getting a ticket. It is also suggested to make your Tibet train ticket reservation online as early as possible.

In the low season, tickets are normally much easier to come by, with the exception of the first week in October, which is the National Day Holiday in China, and the time when most of the people will be traveling, many to Tibet. Tickets for the hard sleeper, the second-class option, cost from as little as 720 CNY, while the soft sleeper prices, for first-class are actually low at only 1,144 CNY.

The train from Beijing is the Z21, which crosses eight Chinese provinces before getting to Tibet Autonomous Region as it steams its way across the immense Chinese countryside. For the last 1,110 kilometers of this epic journey of discovery, the train is traveling on the actual Tibetan plateau, at altitudes that sometimes exceed 5,000 meters above sea level.

If you are planning a road trip from Beijing to Lhasa, then get ready for some serious driving. The total distance along the shortest road route to Lhasa is 3,600 kilometers, which is also the fastest route. There are other, more scenic and longer routes you can take, but it is not advisable.

The overland driving route to Lhasa, if you are driving constantly, will take you just 48 hours. However, allowing for rest stops and an average driving distance of around 750 kilometers per day (around ten hours driving), it should normally take the average driver around five days to reach the Tibetan capital, having driven across almost the entire nation.

The best route if you are driving is to take the G4 highway coming out of Beijing, turning onto the G5 Highway where the G4 turns south at Shijiazhuang. At Yangquan, in Shanxi Province, the road turns into the S50 Highway, which crosses Shanxi and heads into Shaanxi Province, until Yulin.

Leaving Yulin, you take the G65 across part of Shaanxi to Jingbian, and then the G20 all the way to Yanchi, on the boundary of Shaanxi and Ningxia Province. From Yanchi, you then take the G2012 all the way to Zhongwei, then cut down the G109 for a short distance to meet the G6 traveling west, crossing into Gansu Province at Xingrenzhen and continuing on to Lanzhou. 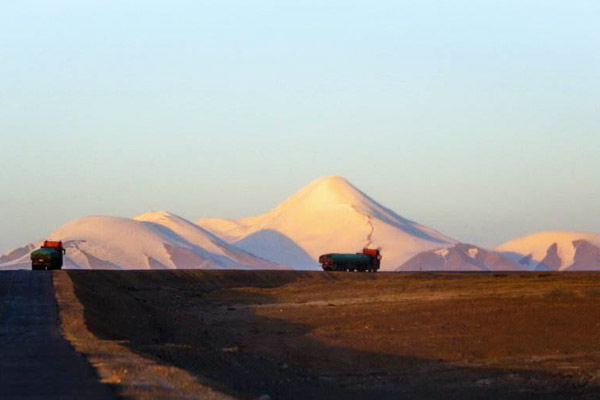 The Road condition and scenery from Beijing to Lhasa.

From Lanzhou, another of the seven gateway cities to Tibet for the Tibet trains, you continue along the G6 into Qinghai Province, which takes you all the way to Xining, the regional capital and start of the Qinghai Tibet Railway, as well as the beginning of the Qinghai Tibet highway.

The G109 Qinghai Tibet Highway was the first road that connected Tibet to the rest of China, covering a distance of around 1,917 kilometers, this high-altitude road was the only lifeline for goods into and out of Tibet until the Qinghai Tibet Railway was opened in 2006. The road is a part of the original G109, also known as China National Highway 109, which once ran direct from Beijing to Lhasa, a total distance of 3,901 kilometers.

Travel Tips for Getting to Lhasa from Beijing

Get Tibet Travel Permit before you go

If you are planning on a Beijing Tibet tour, then you will need to have booked a tour with us, so that we can make the application for your Tibet Travel Permit before you go. Independent travel in Tibet is prohibited, so you will need to be on a pre-booked tour with a registered tour operator, such as us.

Once you have booked your tour, then we can make the application for the Tibet Travel Permit late October to the end of January is the best time to travel, using scanned copies of your passport and Chinese Entry Visa. The processing of the permit normally takes around 20 days, and if you can book early enough, we can have the permit waiting for you at your hotel in Beijing, ready for you to leave for Tibet. 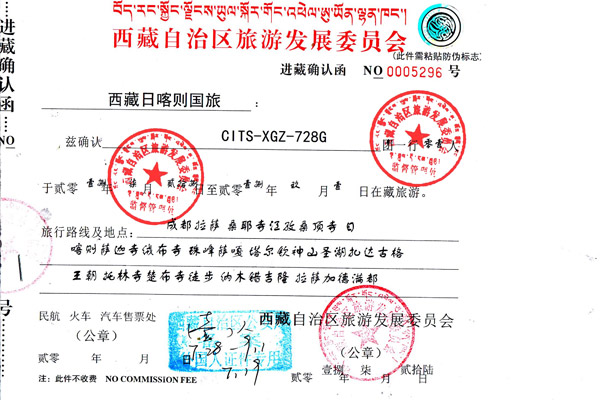 The sample of Tibet travel permit.

The permit is a requirement for all travelers heading for Tibet, and you cannot even board the train or flight if you are not in possession of the permit, either the original (for flights) or a photocopy (for the trains). You will also be required to produce it for the application of the other permits you may need once you arrive in Lhasa, and for any of the many checkpoints that can be found across the plateau region.

Altitude sickness occurs when you travel from a low elevation to a higher elevation (normally above 2,400 meters, but it can be as low as 1,500 meters) quickly without first acclimatizing along the way. Experts recommend that you acclimatize to the high altitudes of Lhasa by acclimatizing at a lower altitude first, usually between 2,400 meters and 3,000 meters.

Contrary to popular opinion, the train to Lhasa does not allow for acclimatization. While it does take a long time to get to the plateau, even from Xining in Qinghai Province, the train has additional oxygen pumped into it to compensate for the lower oxygen levels of the plateau. This is done to help stop passengers from getting altitude sickness on the train before they even get to the Tibetan capital.

If you are traveling to high elevations, the best place to stop for a day or two to acclimatize is Xining, which lies at 2,275 meters above sea level. A day or two of rest in Xining can help you to acclimatize better to the higher altitude of Lhasa at 3,356 meters.

There really is no “best time to go” to Tibet, as you can visit the plateau region at almost any time of the year, with the exception of the period of Losar, the Tibetan New Year, when it is closed. When to go should depend on when you are best suited to travel and the conditions that you require once you arrive. Summer is the busiest season to travel, as it is the peak season for tourism in Tibet, Winter is the low season, so if you are not fond of crowds, then late October to the end of January is the best time to travel. 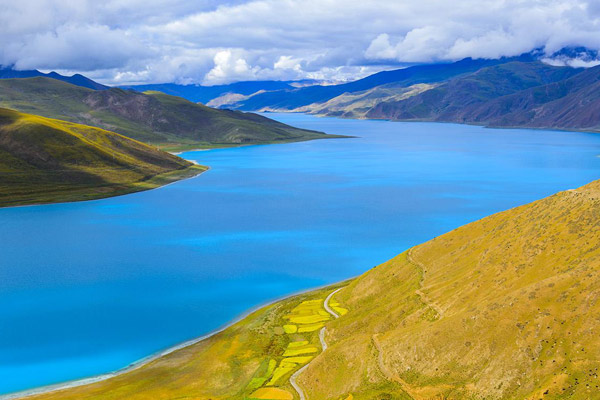 The beautiful scenery of Yamdrok Lake in October.

Spring and autumn are the shoulder seasons, when it is best to go trekking because of the better and drier weather. There are les people than in summer, though not so few as to leave the temples and monasteries un-crowded of tourists. The first week in October should be avoided like the plague, as this is the time when China has its National Day Holiday, which lasts for a week. At this time many Chinese head to Lhasa for their own vacation, and the area become crowded even more than in summer.