Tibet, the roof of the world and one of the highest habitable lands in the world, is also one of the spiritual centres of Asia. Tibet is a land of mountains and monasteries. People from all over the world come to Tibet for experiencing two things—adventure and spirituality; pushing your mind and body to the fullest. Tibet is a place where culture and religion are so tightly bound; spirituality and profound way of living is something you will find among the locals. Here are some of the most famous spiritual and cultural sites in Tibet:

Located in Barkhor Street, Jokhang Temple in Lhasa is one of the important Buddhist Temples in Tibet. It is more than 1,000 years old. Located in the city centre, the architecture of this temple is influenced by Indian, Nepalese, and Tibetan style. The 1.5m high, 12- year old Jowa Sakyamuni Temple is a revered treasure of this temple. Local pilgrims visit this temple everyday and perform Kora in the Barkhor Street around the temple. It takes about 30 minutes and travellers can also perform Kora around the temple. Jokhang Temple is one of the best places to get a peek into the religious ways of the Buddhists. That’s why it is one of the must-sees for all Tibet tours.

Located in Shigatse, Tashilhunpo is one of the largest monasteries of the Gelugpa Sect. Spreading over 300,000 sq. m, this monastery is one of the very few functioning Buddhist institutions in the world. The golden roofs, white walls, small chapels decorate this monastery. Main attractions in this huge monastery are Panchen Lama’s Palace, Maitreya’s Chapel, and Kelsang Temple. Kora around this monastery takes about an hour to finish. One can also find exquisite wall paintings and murals depicting Buddhism with splash of colours. Tibetan festivals like Tibetan New Year and Dancing Deity Festival are celebrated every year in this monastery and during this time, the entry is free for all. 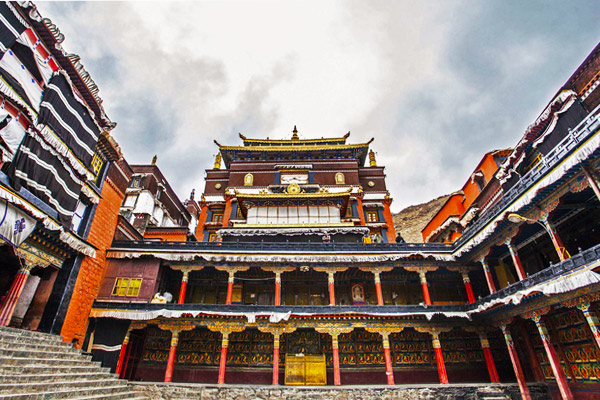 Tashilhunpo Monastery —— one of the largest monasteries of the Gelugpa Sect.

Located 160 km from Shigatse, Sakya Monastery is one of the main monasteries following the Sakyapa Sect. This monastery has stood the test of some intense political and religious turmoil in Tibet over many centuries. This monastery consists of two parts: the northern side and southern side divided by a river running across in between. It is home to many Buddhist arts, statues, scriptures, thangkas, paintings, books etc. Some of the main highlights of this monastery are: sutra (scrolls) library with over 80,000 on various subjects, murals and paintings, large scale Buddhist rituals, etc. Remember to walk in clock wise direction inside the temple and travellers can also meditate inside the temple. There is nothing but peace and tranquillity in this hillside monastery.

Samye Monastery is known to be the very first monastery of Tibet. It is located 170 kms from Lhasa in the banks of Yarlung River. Samye Monastery has a very complex layout that was designed in such a way that it represents the universe. The centre of the universe is represented by the Wuzi Hall, and two chapels stand on the north and south side as the sun and moon of the universe. The continents of the world are represented as small and large halls surrounding. There are four pagodas in each corner standing as four pillars. The whole monastery is surrounded by a circular wall, making the layout look like a mandala from bird’s eye view. It might take more than a day to explore the whole monastery there are accommodations in the monastery and in the nearby villages.

Mt Kailash is considered as a sacred mountain not just in Buddhism, but also in other faiths like Hindu, Jain, Bon, etc. Every year pilgrims from all over Asia travel to hike Mt Kailash, as completing a Mount Kailash Kora is a lifetime quest for many believers. Lake Manasarovar is 20 kms from Mt Kailash and is considered as one of the holy lakes of Tibet. This lake is also the source for four important rivers in Asia namely the Indus, Brahmaputra, Karnali and Sutlej. Many pilgrims perform kora around the mountain and lake. You can camp near the lake or stay in the nearby guesthouses to catch the beautiful sunrise and sunset.

Shoton is one of the most popular festivals in Tibet. One of the most popular activities during this festival is the Buddha painting unfurling. A huge thangka is unfurled in Drepung at the foot of Gebeiwoze Mountain. In the courtyard there activities like Tibetan opera, yogurt banquet etc. take place. This is truly one of the best festivals where travellers can enjoy and learn more about their culture and religion at the same time. With smiles on their faces, excitement palpable in the air and music in the wind, Shoton festival is a pleasure to experience. 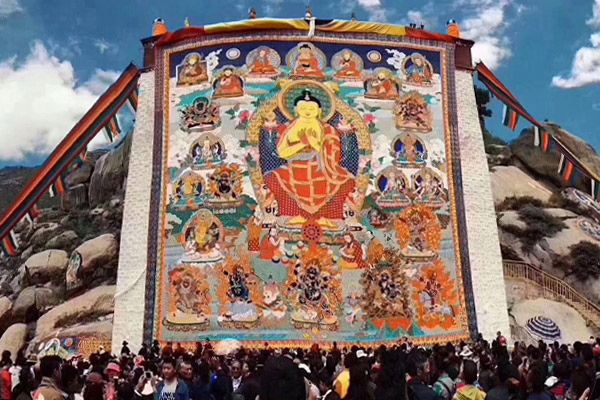 The huge thangka was unfurled at the foot of Gebeiwoze Mountain during Shoton Festival.

>> Join in a 4 days Lhasa city tour with a trip to Drepung Monastery.

Saga Dawa festival celebrates the occasion when Sakyamuni Buddha attained Nirvana. It falls on the month of April or May. During this festival, the locals give back to the poor and set birds free. It is believed that people get a lot of good karma by doing so on that day. A lot of pilgrims go to Mt Kailash during this festival and perform kora and light up butter lamps. Old prayer flags are replaced by new ones and each prayer flag represents the wish of the devotee. During this festival, locals also enjoy extensive picnics in the neighbourhood parks.

Tibetan Butter Lamp festival is best witnessed in Jokhang Temple. This festival is celebrated to commemorate Buddha Sakyamuni. In the day time people perform kora around the temple and at night, hundreds of butter lamps are lit in the temple with many butter made structures. There are puppet shows and statues are extensively decorated in flowers. At night all the locals merrily walk on the streets enjoying the views of the butter structures and puppet shows.

These are some of the etiquettes to be followed:

1. Always circulate in clockwise direction.
2. Ask permission of monks in the monastery before taking pictures of the monastery. Please do the same before capturing the pictures of locals too. Not all the locals are comfortable with their pictures taken
3. Don’t be loud inside the monastery
4. Learning some basic phrases in the local language always brings a smile in the faces of the locals
5. Don’t wear clothes that are vulgar and too revealing while visiting any spiritual sites.

And above all, come with an open heart and curious mind to learn and experience the spirituality in the beautiful Tibet.