Nowadays, the most convenient way to get to Tibet is taking a flight to Lhasa Gonggar Airport from mainland China or Kathmandu, Nepal. Among more than a dozen airports connecting to Lhasa, some of them offer non-stop flights to Lhasa, while others just offer connecting flights. In order to save more time on the way, finding the closest airport to Tibet and taking the shortest flight route to Lhasa could be the most effective way. Just check the closest airports to Tibet as below. 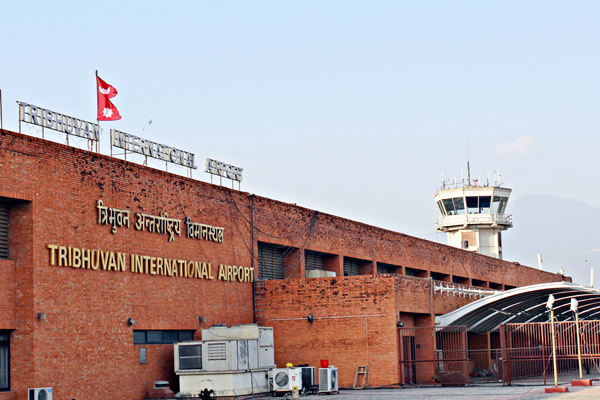 Kathmandu is the capital city of Nepal, lying in the ancient Kathmandu Valley, an area considered in Nepal to be the “true Nepal”. One of the most exotic and exciting cities in the world, Kathmandu has long been a paradise for backpackers and travelers from the west, enticed by the low cost of travel, accommodation, and food in the country, as well as the stunning Himalaya treks. So many travelers decide to take a Tibet Nepal tour to visit the best of the Himalayas in just one go.

Kathmandu’s Tribhuvan International Airport was constructed in around 1949, and was inaugurated as the major airport of the country in 1955. It has only two terminals (one international and one domestic), yet more than 5.2 million passengers travel through the airport every year, and those numbers are increasing annually. The Distance from Kathmandu to Lhasa by Air is 609 kilometers.

Flights from Kathmandu to Lhasa

Flights to Lhasa from Kathmandu run daily, with five major airlines that run the flights; Air China, China Southern, China Eastern, Tibet Airlines, and Sichuan Airlines. There is currently only one direct flight to Lhasa daily, run by Air China, while Sichuan Airlines direct flight only runs every other day. The flight takes just 85 minutes to get across the Himalayas and almost the entire length of the plateau, to land in Lhasa. The cost of the Nepal to Tibet flight depends on the date of travel and the airline used, with the cheapest summer flight being around US$ 465, and some flights reaching as high as over 600 dollars.

Lying in the Sichuan Basin, on the edge of the Chengdu Plain, Chengdu is the provincial capital of Sichuan Province, and one of the most popular locations from which to get flights to Tibet. Chengdu Shuangliu International Airport is a major airport and international flight hub for western China, handling more than 46 million passengers a year. The airport handles eight direct flights to Lhasa daily, with more than 80 other indirect flights as well. The Distance from Chengdu to Lhasa by Air is 1,248 km, and to Nyingchi is 939 km. 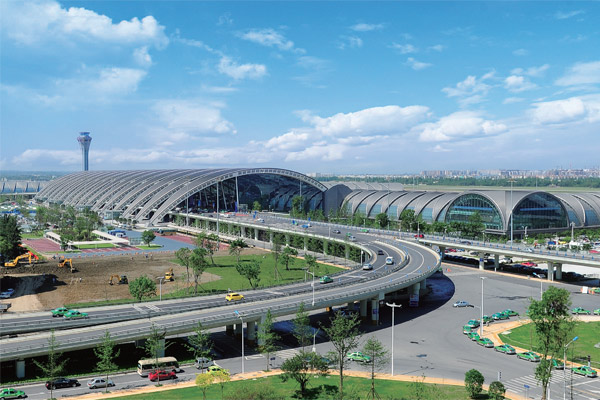 Chengdu Shuangliu International Airport has the most frequent flights to Tibet.

Chengdu is one of the most popular holiday destinations for international travelers to China, with a host of attractions in and around the city, including the Chengdu Research Base of Giant Pandas, the nearby Jiuzhai Valley National Park (Juizhaigou), and the Wuhou Memorial Temple. With so much to see, it is a frequent stopover for those who are going to take a Tibet tour before getting the flights to Lhasa.

Flights from Chengdu to Lhasa

With eight direct flights a day to Lhasa from Chengdu, there are plenty of options for getting tickets to get to Tibet. One of the most popular flight centers for Tibet tourists, flights from Chengdu to Lhasa take around 2 hours 15 minutes. Flight costs from Chengdu to Lhasa can vary greatly depending on the season, and in the height of summer, can cost from around 258 US dollars. Discounts are also available from Chengdu, further reducing the cost of some flight deals to less than 150 dollars.

Flights from Chengdu to Nyingchi

Besides the flight to Lhasa, there are also flights from Chengdu to Nyingchi. The flights from Chengdu to Nyingchi Mainling Airport run four times a day, due to its being a small airport with limited passengers of only around 380,000 per year. Located in the Yarlung Tsangpo River Valley, it is rated as one of the most difficult airports in the world to land in. Flights take just two hours to get to the small airport from Chengdu, and can cost from around 400 US dollars per person for an economy ticket.

Xining Caojiabao International Airport is the main airport that serves Qinghai Province in northern China, and lies in Huzhu County, around 30 kilometers from the center of Xining. An international airport, Xining receives flights from all across China, as well as the Mongolian capital of Hohhot. The Distance from Xining to Lhasa by Air is 1,258 km. 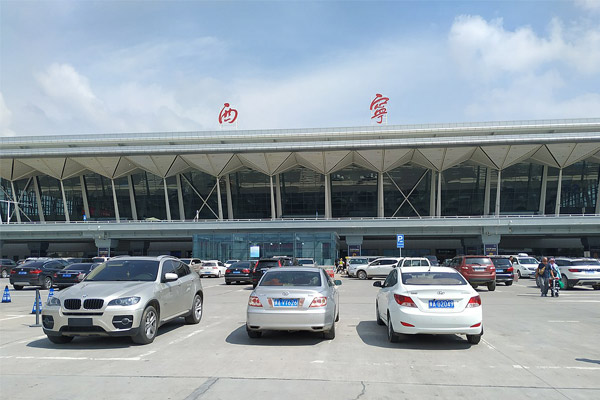 Xining is one of the seven gateway cities for Tibet trains to Lhasa, and is the start of the famous Qinghai Tibet Railway, the first rail link to connect Tibet with the rest of China. Home to the Kumbum Monastery and the famous Tulou Temple, it is an ideal place to acclimatize before traveling to Lhasa.

Flights from Xining to Lhasa

Currently, there are only two direct flights from Xining to Lhasa per day, which are both offered by Sichuan Airlines. The flight to Lhasa from the Qinghai provincial capital takes around 2 hours 15 minutes, and costs from as little as 271 US dollars. While it is not as cheap as the train, it is much faster.

Diqing Shangri-La Airport is located in the Diqing Tibetan Autonomous Prefecture in Yunnan Province. One of the smallest airports with direct flights to Lhasa, the site has one terminal and one taxiway. The Distance from Shangri-La to Lhasa by Air is 860 km. 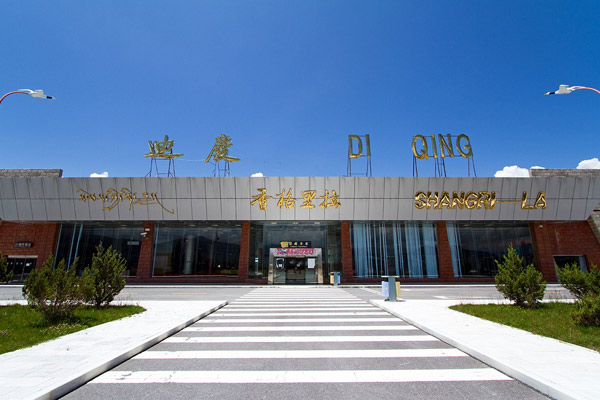 Diqing Shangri-La Airport is located in Yunnan Province and is one of the smallest airports with direct flights to Lhasa.

Shangri-La, in Yunnan Province, was so renamed from Zhongdian to promote tourism in the region, taking the name from the famous novel, Lost Horizon, by James Hilton, written about a mythical city utopia supposedly set in Tibet. A stunningly beautiful place to visit, the area has numerous attractions for the casual visitor, including the famous Tiger Leaping Gorge, Ganden Sumtseling, and the Potatso National Park. And the overland journey from to Lhasa via the Yunnan-Tibet highway is also a popular way to get to Tibet from Shangri-La.

Flights from Shangri-La to Lhasa

There is only one flight to Lhasa from Shangri-La daily, which takes around 2 hours 5 minutes to reach the Tibetan capital. However, there are several connecting flights via Chengdu and Kunming, although these are more expensive. In the height of summer, the busy season for Tibetan tourism, flights to Lhasa from Diqing cost from around 196 US dollars for an economy ticket.

Kashgar Airport is located just outside the city of Kashgar in the Xinjiang Uyghur Autonomous Prefecture in Northwest China. The Kashgar airport is the closest airport to the northern areas of Ngari Prefecture of Tibet and is one of the northernmost airports in China. As well as receiving flights from many cities in China, Kashgar Airport also receives flights from Manas International Airport, the main airport in Bishkek in Kyrgyzstan. 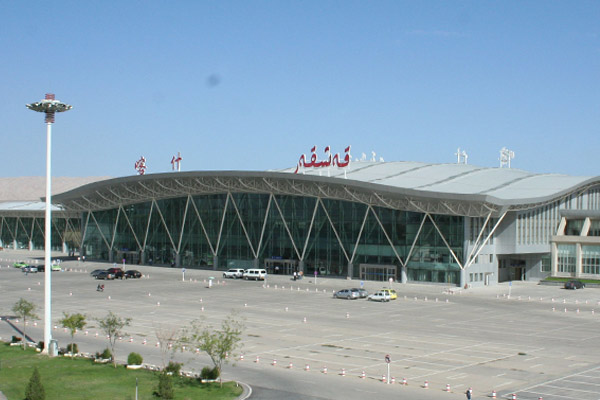 There are two regular flights per week between Ngari Gunsa Airport and Kashgar Airport.

There are regular flights that connect the Kashgar Airport with the Ngari Gunsa Airport, which is located in the city of Shiquanhe, the provincial seat of Ngari Prefecture. With only 859 kilometers between the two airports, flights take less than two hours, which drastically cuts down the time it takes to get to Mount Kailash.

Flights from Kashgar to Ngari

There are only two flights per week between Ngari Gunsa Airport and Kashgar Airport, offered by China Eastern Airlines and Lucky Air. The flight from Kashgar to Shiquanhe takes around 1 hour 35 minutes, and costs from around 300 US dollars for an economy ticket. If you are planning to travel from Kashgar by air to Ngari to visit Mount Kailash, it is best to check the flight dates first, as there are sometimes no flights for several days throughout the spring and autumn seasons, and none in winter from December to the end of March.