Christmas in Tibet: Is That a Good Option for a Tibet Winter Tour?

Christmas is an amazing time of year, filled with love and peace, a cherished time for families, and a time for giving and receiving gifts, eating lots of food, and celebrating in the most expansive way possible. And even in Tibet, this happens. For many travelers to Tibet in the winter months, Christmas is celebrated in the major hotels in Lhasa, where you can see the Christmas trees bedecked with tinsel and baubles, and crowned with a star, and the dining rooms and lounges decorated with traditional western Christmas decorations. You can even get a traditional turkey Christmas Dinner in most of the hotels that remain open for the western Christmas holiday season.

A lower travel cost, a special Christmas experience, a featured winter view of Tibet…all you will experience in a Christmas holiday in Tibet could be a special lifetime memory for you.

Why Travel Tibet during Christmas Season

Unlike most of the western world, which celebrates Christmas as a major holiday, December is a low season for Tibet tours, which means a lower price and fewer travelers there. The cheaper price can be lasted from November to January during the Christmas seasons. Here are the major reasons to take a Tibet tour in these winter months.

A Cheaper Price in Low Season for Tibet Tours in Christmas

While western holiday destination prices may double for the Christmas season, Tibet still has the usual low prices of the winter months, making it a great place to travel to for Christmas. Winter is the low season for Tibetan tourism, and this often means lower prices on tours, hotels, flights, and even on the price of the attractions.

With fewer tourists traveling to Tibet in winter, the hotels are often giving discounts on rooms, and removing the usual single room supplements in order to try and attract the few winter tourists that are brave enough to adventure to Tibet in the winter. Similarly, the low season can help you get cheaper flights to Tibet from mainland China. When you take a Tibet train in winter, the Tibet train ticket price is lower in winter than in summer, for there is no extra fee caused by the huge demand in peak seasons.

Tours in Tibet are less expensive in the winter months to, with several deals available for the Tibet winter tours, and while the cost of most attractions are included in the price of the tour, this is also passed on to the tourists in the overall price reduction for a winter tour.

Experience How the Tibetans Celebrate the New Year

It is also a rare chance to experience Tibetan New Year if you visit Tibet in the late Christmas season. The Losar Tibetan New Year, mostly known as the Tibetan New Year, starts more than a week before the end of the previous year, and lasts for at least seven days into the new year, sometimes as much as fifteen days. While this period is normally a closed time for Tibetan tourism, travelers from the rest of China can experience the festival in Tibet, and international travelers can travel to some of the Tibetan areas outside the Tibet Autonomous Region, such as Yunnan and Sichuan, where the celebrations are the same, but the Tibet Travel Permit is not required. 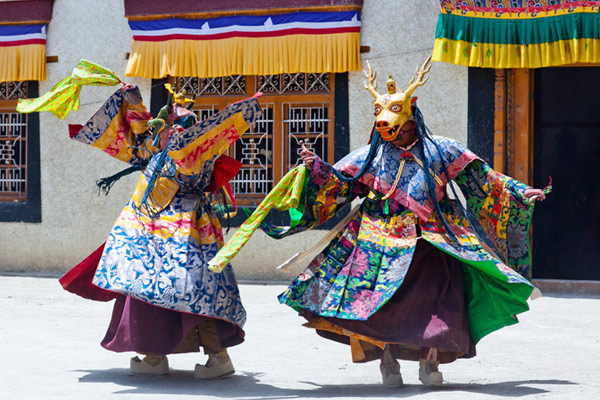 Performing a traditional dance with ceremonial mask is one of the methods to celebrate Losar Tibetan New Year.

Weather of Tibet in Christmas Season from November to January

Weather of Tibet in Christmas largely depends on where you are traveling within the region, but is almost always pretty cold. In Lhasa, the temperatures can get low, to around 3-5 degrees during the day and as low as minus ten degrees at night, while in the west of Tibet, the area around Mount Everest can drop to as low as freezing even during the day, with nighttime temperatures of around minus fifteen degrees.

The advantage of the Christmas season in terms of weather is that it is almost always dry, with very little rain in any part of Tibet, and the skies are clear and bright, making the days warmer than they really are. The disadvantage is the intense wind that blows across the plateau from the west during the winter months, that can reduce the air temperature greatly, making you feel much colder, even in the bright sunshine.

Best Things to Do on a Tibet Winter Tour

If you are thinking of traveling to Tibet in the winter, then you are in for a rare treat. With fewer tourists around, the attractions and monasteries are not crowded, and you can take your time exploring and discovering the stunning aspects of these awesome places.

Touring around Lhasa in the winter is so much better than in the crowded summer months, and you have less chance of getting rained on. The Potala Palace is actually a much better sight in the winter, with a light frost covering its roofs and a little iciness to the air, making the photos crisper and clearer. 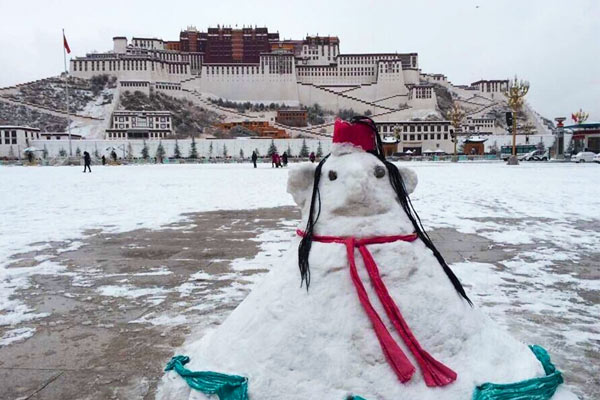 Tourists made a snowman in front of Potala Place when Lhasa met with its first snowfall.

While Jokhang Temple may be an amazing place to visit in Summer, the winter is when most Tibetan pilgrims make their journeys across the plateau to the most sacred temple in Tibet. The low season is when you will see more pilgrims prostrating in front of the temple, and performing the ritual kora around Barkhor Street, and this will give you a much better experience in understanding the Tibetan Buddhist culture.

While some of the places outside Lhasa may not be accessible, such as Lake Namtso, Mount Everest is still open for tourists, though the tent hotels and guesthouses have already packed up until spring. The base camp is a stunning sight in the winter months, covered in snow, and makes a much better photo, with the snowy beauty of the landscape and he vast mountain in the background.

Tips for Traveling in Tibet in Christmas

Apply for the Tibet Travel Permit in Advance

If you are thinking of traveling to Tibet in the winter months, then do not make the mistake of thinking that the fewer tourists will make getting the Tibet Travel Permit much faster. The processing time is the same, whether you book in the busiest season or the slowest season. Since the processing of the permit can take around 15 to 20 days to complete, then it is still essential to book your trip in advance of your expected travel date, with more than enough time to process and receive the permits you require for your tour.

Worried about visa expiry? This is usually not a problem, unless you get your visa from the embassy more than three months before you are going to travel. An embassy-issued visa from the Embassy of the People’s Republic of China is valid for three months from the date of issue, so you can get the visa and book your trip well in advance, without worrying that your visa may expire.

There may be few accommodation options, especially for an EBC tour in winter

One of the disadvantages of traveling to Tibet in the winter low season months is the lack of accommodations in some areas. While Lhasa is usually fine, with plenty of hotels and guesthouses staying open throughout the winter for those winter tourists, though they may be few. However, you may find that you have very limited options on where to stay in some of the more outlying areas, such as EBC. At EBC in the winter, the guesthouses at the base camp have packed up until spring, so your only option for your Everest Base Camp Tour in winter is the Rongbuk Monastery Guesthouse, with very basic facilities.

Celebrating Christmas on the Plateau

While Tibet may be a mainly Buddhist culture, the recent years have seen a change in the way people in Tibet see the outside world. You may even hear some of the younger Tibetans wishing you “Merry Christmas” as you wander the streets in the middle of December. Though they may not celebrate it, many of the younger people know of Christmas more as a celebration these days, instead of just being thought of as “Jesus’ birthday”. The modern world as already come to Tibet, and with more western travelers heading to the region every year, Tibetans are learning more about western culture, while westerners learn more about the Tibetan culture in return. Christmas may not be celebrated, but it is well known now, and there are plenty of hotels where you can find Christmas trees and decorations, and even Christmas Dinner for their western guests.

If you are looking for a white Christmas, then Tibet is one of the best places to find it. It may not snow much in Lhasa in December, but the surrounding mountains are often covered in snow throughout the winter, and many of the mountains of the Himalayas are snow mountains, covered with snow all year round. If you want to find snow on Christmas Day, then try Tibet for that white Christmas feeling.

0 Comment ON "Christmas in Tibet: Is That a Good Option for a Tibet Winter Tour?"