Best Way to Get to Tibet from China

Traveling to Tibet can be done from either China or Nepal, and for most people, the trip from China is their preference. There are many international flights that terminate in cities across China, and with more places from which to travel to Tibet, and different ways in which to get there, traveling to Lhasa from mainland China is one of the best options.

Traveling to Tibet by train is a very popular option for travelers to the roof of the world, and there are seven gateway cities across China from which you can get the trains to Tibet. One of the most unique ways to travel in China is by train, and the rail network across this huge country is well established, with several lines now carrying the modern high-speed trains that can reach speeds of up to 250 kilometers per hour.

For Tibet, however, there are no high-speed options as yet. Although the journeys by train to the Tibetan plateau are filled with excitement and amazement at the journey across the vast Tibetan plateau. This adventurous journey can take from between 22 and 55 hours, depending on where you get the Tibet train, and is an experience that everyone traveling to or from Tibet should try at least once.

The gateway cities that have trains that leave for Tibet are: Guangzhou, Beijing, Shanghai, Chengdu, Chongqing, Lanzhou, and Xining, and there are trains that stop in Xi’an, where you can board if there is space and free tickets.

Xining is the shortest of the journeys to Tibet, located in Qinghai Province in northwest China. The start of the amazing and spectacular Qinghai Tibet Railway, the first rail link to connect mainland China with the Tibetan plateau, Xining is one of the most popular locations from which to start the journey and has more tickets available on each train than from the other six gateway cities. 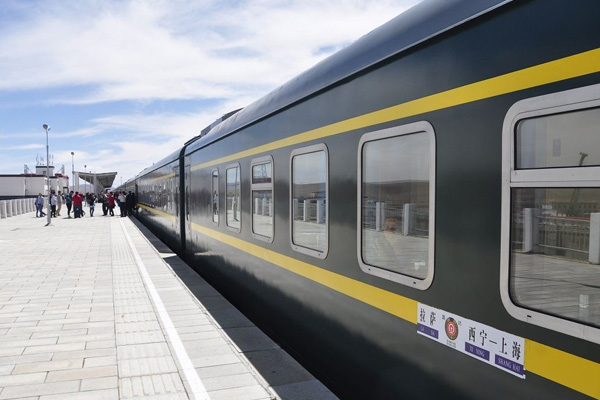 Xining offers the shortest journey for tourists to take a Tibet train to Lhasa.

Guangzhou is the longest of all the seven journeys to Lhasa, taking around 55 hours to travel from southern China to Qinghai and beyond to the Tibetan capital. As the longest journey, it is also the most expensive, although it is not as costly as flying to Tibet.

One of the main reasons for taking the train, apart from the amazing views that you get as the train speeds its way across the vast expanse of the plateau from the Tanggula Mountains to Lhasa, is the cost. Trains from all across China work out to be much less costly than flights to Tibet’s Lhasa Gonggar International Airport, even if you are taking the most expensive first-class option.

The trains also have much more comfort than flying, mainly due to the long period of time that you will spend on board. There are three main classes of tickets for trains to Tibet. First-class is the Soft Sleeper berth, which is a cabin with four bunks over two levels, and which includes a lockable door and local television. The second-class option, the Hard Sleeper berth, is not actually as bad as it sounds, since the beds are still nice and soft. The main difference here is that the cabin is open to the corridor of the train and has six berths over three levels. The top berths in these cabins is often the best option (including the middle berth in the Hard Sleeper), since it is normal for the other occupants to use the bottom berths to sit on during the daytime.

The final option is the Hard Seat, which is not actually hard and is not recommended for traveling to the Tibetan capital, even from Xining. Sitting in one seat for 22-55 hours is not good for the body, and can become uncomfortable after several hours, leaving you wanting to wander along the train and wishing you had booked the sleeper berths instead.

Traveling by air to Tibet is the fastest way to get to the plateau, though not always the best. At most, from the furthest city in mainland China, it only takes 8-9 hours to reach Lhasa, while the shortest train journey requires at least 22 hours of travel. If time is of importance, then flying is the best option, though it may be a lot more expensive that taking the train. 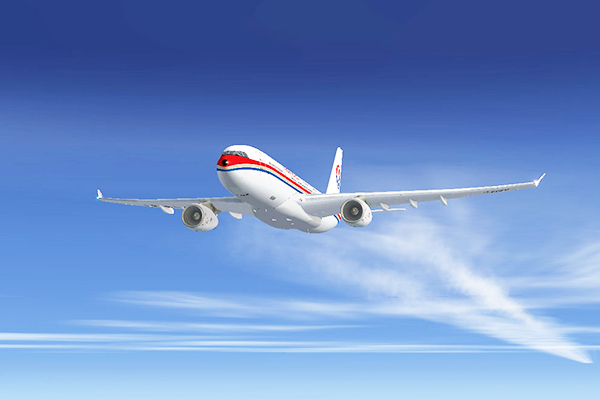 Tourists can take a flight to Lhasa from mainland cities in China to save time on the way.

There are flights to Lhasa from multiple cities across China, including Beijing, Shanghai, Chengdu, Chongqing, Xi’an, Lanzhou, Kunming, Kangding, Xining, and many others. Flights are sometimes the only option for travelers to Tibet, especially in the summer months, when the trains are often fully booked in advance of the date of departure. Flights can also be fully booked though, and you will need to make sure you book far enough in advance to ensure your seat. However, as flights can be booked up to a year in advance, while trains can only be bought up to sixty days before the date of departure, then the flight option can sometimes also be the more convenient one.

Get to Tibet from China by Overland - Five Highways to Tibet 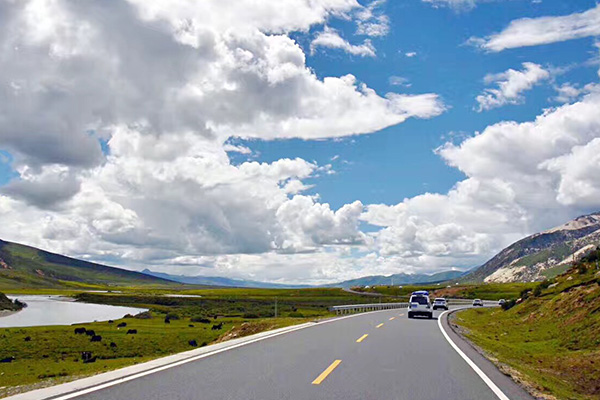 Taking an overland trip to Tibet could be a unique travel experience.

From the north of China, there is the famous Qinghai Tibet Highway, the former main route for trucking supplies and goods into and out of the region, and the most popular of all the driving routes. In the northwest, there is also the Xinjiang Tibet Highway, which runs from Kashgar in Xinjiang Uyghur Autonomous Region to Lhasa, following the G219 National Road and the G318 National Road all the way to Lhasa.

While the idea of driving may appeal to many people who love road trips, it is not permitted for tourists from outside China to drive in China and Tibet, and you will need to have a local Chinese or Tibetan driver for the whole trip, which can make your Tibet overland trip rather expensive.

Required Documents for getting to Tibet from China

If you are traveling to Tibet from mainland China, there are a number of documents and permits that you will need, to get around in Tibet as well as to just enter the region. These documents are all required of all foreign tourists to Tibet, and many are not available to be obtained directly.

The main document you need, before anything else (apart from your passport!) is the Chinese Entry Visa, which is needed to get into the country in order to start your journey to Tibet. The visa cannot be applied for on arrival at any of the airports or other ports of entry and must be obtained prior to traveling from an Embassy of the People’s Republic of China.

The Tibet Travel Permit is the primary permit that you will need in order to get into Tibet and travel around within the region. This, however, cannot be obtained personally, and is applied for as part of your booked tour. Once you have decided on your tour and booked the package you want, we will make the application for your Tibet Travel Permit using scanned copies of your passport and visa. Application can take between 15 and 20 days to process and should be made as early as possible to avoid not getting your permit in time. Rush permits are not available from the Tibet Tourism Bureau in Lhasa.

Once the permit has been approved, it will be forwarded to us, and we will deliver it to you in your hotel in China. You must leave enough time to have the permit delivered to your hotel before leaving is you are flying to Lhasa, as the flight boarding requires the original permit to get on the plane. For train travelers, a photocopy will suffice, and you should make several copies, as a precaution. Your original copy of the permit will be used by your guide in Lhasa to obtain the other permits you may need to travel around the region outside the area of Lhasa.

Travel Tips for Getting to Tibet from China

If time is of the issue, then it is often better to fly, though if budget is a concern, then a flight to Xining and train to Lhasa can help accommodate both options and keep the costs down while not taking too long to get there.

If you are traveling by train, it is a good idea to take plenty of snacks with you, especially if you are not accustomed to Tibetan and Chinese food. Western foods are not normally available on the trains, although there is a cart that sells snack foods and packet meals that are internationally known, such as cup noodles and biscuits.

Neither train nor flight allow you to acclimatize on the way to Tibet, despite what you might have read on some sites which tell you that you can acclimatize on the train. The trains to Tibet are piped with oxygen after the trains pass Golmud, on the way up to the plateau, to make the journey easier for foreign tourists. Acclimatization requires you to be at a constant elevation above 2,400 meters for at least a full day for it to be effective, and the train does not have that option.

If you want to acclimatize to a lower altitude, to make the transition in Lhasa easier, then Xining is the ideal place to spend a day or two. At 2,275 meters above sea level, it is within the intermediate acclimatization level for making things easier to acclimatize to the higher altitudes of the plateau. You can also get to see some of the beautiful sights of this part of Qinghai Province as well, such as the massive Qinghai Lake.

0 Comment ON "Best Way to Get to Tibet from China"