Tibet Weather: When is the Best Time to Visit Tibet?

Lying on the high-altitude Tibetan plateau, the Tibet Autonomous Region is a popular tourist destination for foreign travelers, and many ask the question “How about the weather in Tibet?” There really is no uniform answer for this, as the best time to visit Tibet largely depends on what you want to see and where you wish to travel within the region. The diverse geography of the plateau and the varied weather patterns mean that certain areas of Tibet are better visited at different times of the year, and knowing when it is best to visit an individual area is a better idea.

The peak season for Tibet tourism is normally from April to October, while the low season runs from November to January, with a closure of the region to foreign tourists during February and March. You can visit Tibet all year round, and where you want to go usually defines the best time to visit. Tibet is a sub-tropical plateau climate area, with four distinct seasons, spring, summer, autumn, and winter. However, there are distinct variations in the climate across the region, which can depend on the altitude and area, and while it can be heavy with snow in the northwest of the region, the southeast can be sunny and warm. The following is the detailed information about Tibet weather in the major travel destinations.

Sitting at an elevation of around 3,656 meters, the capital of Tibet has gone from being a niche holiday to a commercial tourist destination. For many people, the best time to visit Lhasa is from April to October, in the peak periods for tourism, as this is the warmest time of year. However, the summer months of July and August are the rainy season, and there is slightly more rain in Lhasa than in the western areas. For many, the rain is not an issue, as it does not interfere with a tour of the region, and usually only occurs in the late afternoon and early evening. 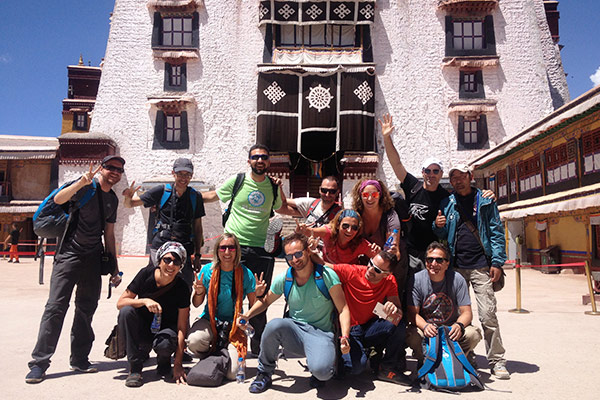 April to June and September to October are classed as the optimum time to visit all of Tibet, and especially Lhasa, as these are the dry yet warm months, when there is very little rain and it is warm enough to be comfortable. The spring and autumn periods are dry and a little windy, so skin moisturizers and lip balms are a necessity, while summer is hotter, but a little wetter, and definitely more humid. With temperatures reaching only around 10-20 degrees, Lhasa may seem quite comfortable, although the ultraviolet rays of the sun can be damaging during this period as the atmosphere is thinner and filters out less UV radiation.

Winter in Lhasa is only a little colder than autumn during the day, and it is at night that you will see the real temperature difference, as it can drop from a balmy 10 degrees in the day to an arctic minus 10 degrees at night. However, this is not a bar to take a Lhasa tour, as there is rarely any snow in the city and surrounding area, and touring around the area and the city is still possible. Just remember to take a few sweaters and a warm jacket with you for the evenings.

Lying in the far west of the region, Mount Everest, known locally as Qomolangma, is one of the most popular destinations in Tibet for foreign tourists. The weather in the mountain regions of Tibet can be extremely hard to predict, which means that there are certain times of the year when it is better to visit Everest Base Camp (EBC) than others. With the mountain being in the midst of the mighty Himalayas, right on the border with Nepal, it is not a very good idea to try and travel there in the winter months from November to April. 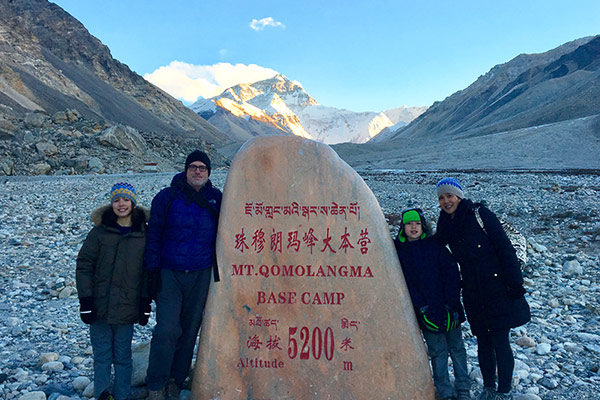 Adventure to Everest Base Camp to view world's highest peak

Even summer is not really ideal for visiting the mountain, as the summer monsoon does have a small affect on the climate in the area, and brings in clouds, although they do not release much rain over the mountain. However, the clouds do have a tendency to obscure the peak, leaving tourists visiting to see the summit of the mountain a little disappointed.

Spring, from April to May is the very best time to head for EBC, as the colder weather is now over, and the rainy season has not yet started. The skies are normally clear, and while it may be windy, the temperatures are warm enough to be comfortable. April and May are also the optimum time for climbing the world’s tallest mountain, and there are often expeditions at the base camps at this time of year. There is also a small period in autumn, in September and October, where there is a good chance of favorable conditions, as the rainy season has passed and the clouds have moved on.

Another famous mountain set out in the west of Tibet, in Ngari Prefecture, is the sacred mountain of four religions, Mount Kailash. Often visited as a twin stop with Lake Manasarovar, one of the Great Three Holy Lakes of Tibet, there is a defined period when it is best to visit the area. In an area of extremely pure air and giving of an aura of intense spirituality, Mount Kailash is one of the most popular places to visit for pilgrims, who often travel to the mountain on foot to pray at its slopes and perform the ritual kora trek around the mountain. 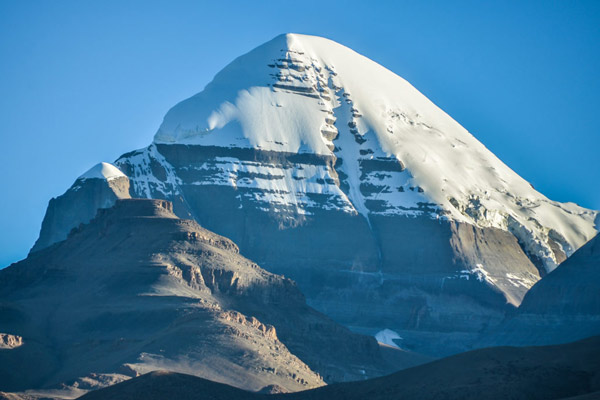 Spring and Autumn are ideal times to take a Mount Kailash tour.

Winter is definitely out for traveling to Ngari Prefecture, and the weather is always inclement, and roads can often be blocked by snowfall. Similarly, as the mountain is set farther into Tibet than Everest, the rainy season brings more rains that can make traveling around the kora route very dangerous.

Spring and Autumn, from April to June and September through October, are the ideal times to take a Mount Kailash tour. While it is not as warm as summer, it is warm enough to be comfortable, although the temperatures can drop drastically at night. However, it is not too cold to spend a few days trekking around the mountain, and the long walks each day will keep you warm. The weather is at its most optimum during spring and fall for trekking in Tibet, especially around the kora routes of Lake Manasarovar and Mount Kailash, and the lake itself has a slightly warmer temperature for those that want to take a dip to wash away their sins.

Lying some 160 kilometers to the north of Lhasa, Lake Namtso lies on the border between Lhasa Prefecture and Nagqu Prefecture, and can get very cold in the winter months. Known in Tibetan as the “Heavenly Lake”, it is the highest saline lake in the world, although it can still freeze in the winter. Another of the Great Three Holy Lakes of Tibet, it lies at an elevation of 4,800 meters, and is surrounded by mountains whose spring melt feeds the lake. 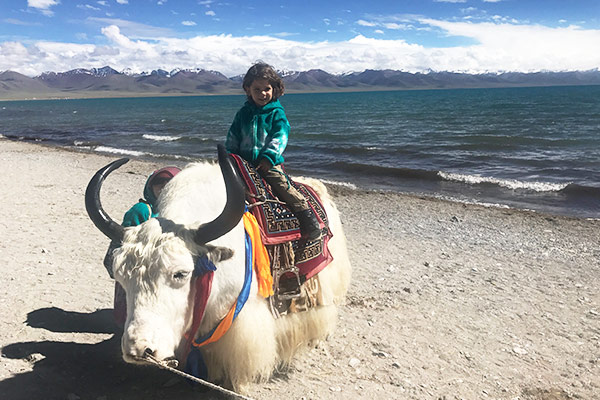 The best season to visit Namtso is from June to late October.

When it comes to the best season to visit, it is normally best in summer and autumn, from June to the end of October. The temperature around the lake can still be very cold in spring, and until the ice and snow melts from the area, getting there can be a little hazardous. However, once the summer season starts, the lake has warmed up, and the surrounding air is much fresher and more pleasant. Despite having a short monsoon season in the summer months, it is still possible to visit the lake, as long as the rains are not too hard to make driving over the high pass impossible. The weather is warm, and there is a good chance you can see the nomadic herders moving their herds of yak across the surrounding plain looking for the best pasture.

In autumn, the weather is a little colder, but the skies are clear, and the cold is not that noticeable. With almost no rainfall at all, the five-hour trip to Namtso is a delightful drive, as you pass through the stunning countryside heading north from Lhasa. Autumn is also the best time for stargazing, and the area around Lake Namtso has no light pollution at all, making it one of the prime dark sky areas of Tibet, where you can see more stars than at any other location on the planet, including a great view of the Milky Way itself.

The elevation in Nyingchi is mostly lower than that of Lhasa, and the seasons are more defined, with more rainfall in the summer monsoon months. Summer in Nyingchi runs from May to September, and the heavier rainfall can sometimes cause landslides, making travel almost impossible. The roads getting there can be dangerous as well, as the rain makes the surfaces slippery and hazardous. 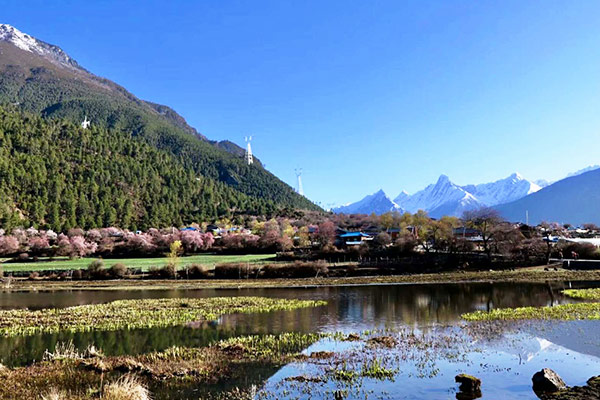 Nyingchi in spring is especially attractive with warm temperature and fascinating peach blossoms.

Spring is one of the best times to visit Nyingchi, from March to early May, when the weather is warm and pleasant, and it is also the time when the stunning beauty of the peach blossoms fill the valleys and mountainsides with delightful pink and peach colored flowers. One of the major highlights of any trip to Nyingchi is the annual Peach Blossom Festival, which occurs in late March and throughout April, and is one of the most popular festivals in the Tibet. With dozens of places in which to see and photograph the beautiful blossoms, there is no doubt that spring is the best time to be there.

Autumn is also a prime time to visit, as the leaves are turning brown and the weather is warm and clear. As the trees shed their summer leaves, the ground is covered with a blanket of color, which contrasts the snow-capped mountains and green pine forests. Winter in Nyingchi is the dry season, and while travel is possible, thanks to the lower elevation, one needs to take care of your skin and lips, as the winds are strong and chaffing. It is still a little warm during the daytime, but the nights can drop to well below freezing, making it an icy time to visit. However, with enough warm clothing and a nice warm bed to sleep in, there is no reason why a trip to Nyingchi in winter is not possible.

0 Comment ON "Tibet Weather: When is the Best Time to Visit Tibet?"