Lying in the mighty Himalayas is the tallest mountain on earth, Mount Everest. At 7,848 meters, the peak of the mountain stands tall against the height of the mountains that surround it, while down below, at the northern Everest Base Camp (EBC), thousands of tourists come to see this amazing peak, and take their photos for posterity.

The northern Everest Base Camp lies in the Tibet Autonomous Region of China, and is one of the most popular places in Tibet for tourists to visit. At an altitude of 5,200 meters above sea level, the base camp is one of the best places from which to view the mountain, but to get the best view, tourists have to be in the region at the right time of year. The best time to visit Everest Base Camp, as well as the ideal conditions for photographing the mountain, actually do not occur in the peak period for tourism in Tibet for the weather of Mount Everest area is different from the weather of Tibet in other regions. If you are there in the peak months of summer, chances are the summit will be covered in clouds.

Summer in Tibet is the monsoon season, and while there is not really that much rain in the high mountains of the Himalayas in summer, the cloud persists, and often obscures the high mountain peaks. For the best time to come to visit and view the mountain, you need to be there in spring and autumn.

In Tibet, near the border with Nepal where Everest lies, spring is from March to May, while autumn runs from September to November. However, March and November are not the best times to visit. Most of the time, March is a closed month in Tibet, as it follows the Tibetan New Year, Losar, at which time tourism is not permitted in the region. November, however, is an open month, though it is starting to get a little colder around the base of Mount Everest, and there is a small possibility of snowfall.

Weather at the Everest Base Camp can be changeable at any time of the year, and the temperatures vary greatly between the seasons. However, with moderate temperatures in spring and autumn, there is little chance of snow or rainfall, and it is comfortable enough to be able to travel there without arctic trekking gear.

Once Tibet opens for tourists in April, the temperature at EBC has already risen to a comfortable 10 degrees, and with the sun shining down, it can make it feel warmer than that. Clear skies prevail throughout April and May, although it can get windy at times, and the wind is dry and chaffing. AS the season progresses into May, temperatures rise a little more, with maximum highs of around 15 degrees, and warm sunny weather, albeit often windy. 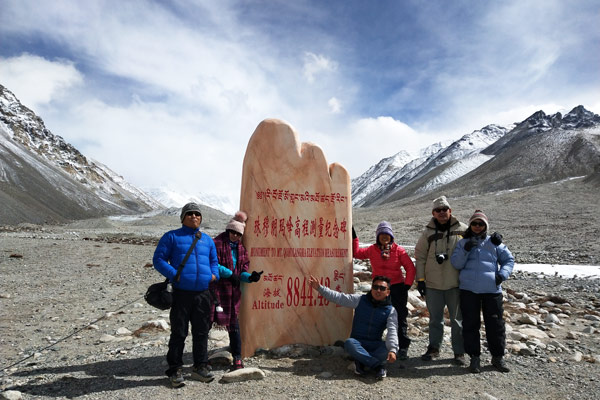 Fine weather in spring and autumn is good for the trip to Everest Base Camp.

Night time temperatures, however, are a different matter. Tibet is known to be a land of extremes, and the extremes in temperature change between night and day are incredible. In May, the temperature can drop to around freezing at night, while in April, it can get as low as -5 degrees. The reason for this massive difference in temperatures is the atmosphere. With a thinner atmosphere at the high altitude of the base camp, the air neither blocks nor holds in the sun’s rays, and while the sun shines the heat is on, but once it has dropped below the horizon, all the heat in the air leaches out into space, leaving the air cold and icy.

The main benefit of the spring and autumn months of April, May, September, and October is the warmth of the day and the clear skies. With the sun beating down, it is possible to just wear light sweaters and still not feel cold, and with the clear skies, there is no better time to get photos of the peak of this amazing mountain than in spring and autumn.

April to May and September to October are known as the pre and post monsoon periods, both before and after the summer monsoon rains strike on the mountainside. From June to mid-September, there rain averages above 200 millimeters per months, which is enough to make it very wet. However, in April and may, there is very little rain, averaging around 50mm over the two months, and similarly, the average in late September and October is around 40mm over the two months.

With little rainfall in the spring and autumn, there is a better chance of getting some good views and photos of the peak of the mountain, as the skies are clear and bright. There is still a chance that it can become cloudy and have a little rain during these months, but these days are rare in spring and autumn, and your tour guide can normally work around it if the planned day to go to EBC is a little too cloudy.

What to Bring When Visiting EBC During these Months

Spring and autumn at EBC can be warm during the day, but you still need to have some warm clothing, as it does not get as warm as the lowland areas of Tibet. At this high altitude, even spring and fall can be colder than you may be used to, with temperatures ranging from 7 to 15 degrees.

It is best to wear several thinner layers to stay warm during your Everest Base Camp tour, rather than just a few really thick layers of clothing. The body heat is trapped between the layers better, and can keep you warmer than when wearing a heavy sweater and thick jacket. Moreover, if it does get to warm or too cold, you can always remove or add layers to suit the temperature. 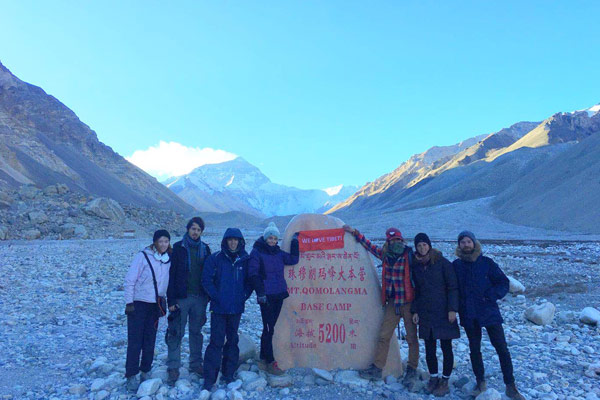 Lightweight thermal underwear can help better with staying warm, and breathable pants and fleece sweaters are a good addition to your packing list. Rather than a heavy arctic jacket, which is not really necessary at any time of year in Tibet, unless you are planning to climb the mountains, a good down coat is preferable, as it can keep out the wind and cold better, and not make you sweat too much. When sweat dries it can get cold, and make you feel colder than it actually is.

For the feet, warm thermal or woolen socks are best, with a good solid pair of hiking boots or shoes. The ground around EBC is not paved, and is rough and rugged in majority of the area, so light shoes or rubber shoes are not really practical. Gloves are not always necessary, but it is a good idea to have a pair of decent thermal gloves to hand in case your hands get cold. Heat loss through your extremities is common at high altitudes, and gloves can help prevent this. A hat is a necessity, and not just to keep the sun off your head. Heat loss also occurs heavily through the scalp, and the hat can help keep the warmth of the body in.

Aside from those few essentials, you will want to bring sunglasses with you, as the UV rays from the sun can be a lot stronger at higher altitudes, and can easily damage your eyes, causing snow-blindness in bright conditions where there is a very light, reflective landscape. EBC can still have some remnants of snow in April, and even with no snow, the light-colored ground can be glaringly bright to the naked eye. Also, since it can get a little windy at times, and the winds are dry and chaffing, moisturizers for the hands and face and some lip balm can help protect the exposed areas of skin from the harsh winds.

Nighttime in EBC can still get down to below freezing in spring and autumn, and it is a good idea to bring a warmer jacket and pants for evenings, as well as a good arctic sleeping bag if you are going to be staying overnight. Even in the tent hostels at EBC, it can still get very cold at night as there is no central heating available.

Travel Tips for Visiting EBC in This Period

EBC is at an altitude of 5,200 meters, which is around 1,600 meters higher than Lhasa. Acclimatization to the altitude of EBC is not always possible, and staying overnight at the base camp can increase the risk of altitude sickness. Rongbuk Monastery, at only 4,980 meters, is the better place to stay overnight, as it is best when ascending high, to descend to a slightly lower altitude for the night.

Sun cream is a good way to ward off the sun at very high altitudes, and though there are many creams available that say they have a very high Sun Protection Factor (SPF) to allow you to stay in the sun longer, this is actually a myth. Sun creams with an SPF of around 50 blocks around 98 percent of the sun’s UVB radiation, but it does not block the UVA radiation, so wearing a wide-brimmed hat as well can help reduce the harmful effects of the sun.

Protecting your gadgets is an important thing when traveling to high altitudes such as EBC. Many cellphones, tablets, and laptops do not work well at altitudes above 4,000 meters, so it is necessary to ensure your equipment will work, or you may have a problem with taking those photos with your phone or tablet. Digital cameras have less of a problem at high altitudes, but should still be kept in the camera bag and close to the body for warmth rather than hanging around your neck in the open air.