Concealed on the “roof of the world,” the Tibet plateau is a land of breathtaking views, majestic statues, and spiritual monasteries that seems like a different realm altogether. Not only are the vistas worth the trip, but you are also bound to find people there willing to go out of their way to help you out! It attracts around 23 million tourists from all corners of the world per annum, and the number goes up by 15% each year.

Tibet is called the ‘roof of the world,’ and there is a good reason for that. It’s the world’s biggest and highest plateau, with an area of 2.5 million square kilometers. Tibet’s average elevation is roughly 4,500 meters (~14,800ft), featuring snow-peaked mountains standing tall in front of vast plains. Wide highways weave their way through tall passes, which have prayer flags hanging over them, causing you to reflect upon your spiritual beliefs before you even get to the monasteries.

To top all that, clear, still blue lakes reflect the snowy mountaintops and glaciers like glass, which takes your breath away. Home to one of the nicest people on Earth, Tibet can win over even the most hardened of hearts within minutes.

For those of you who are either on your way, are about to or are simply planning to travel to Tibet someday, we have compiled a list for you about the most beautiful parts of the region which you absolutely must see during your Tibet tours.

Tibet is home to the most beautiful, unpolluted lakes on the Earth. There are a number of lakes in the plateau, each more alluring than the last, with the ability to mystify you at one glance.

Namstso Lake is revered as one of the holy lakes by Tibetans. Sited at an altitude of 4700 meters, it is at a 4-hour-drive from Lhasa, the administrative capital of Tibet. Its name translates to “celestial or sacred lake,“ but it is more commonly known amongst the tourists as the “Heavenly Lake.” 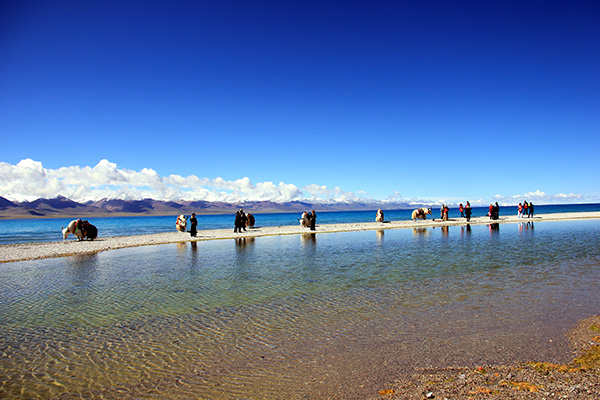 Lake Namtso is known as the "Heavenly Lakea" among the tourists.

Namatso Lake offers spectacular views of clouds almost touching the water-surface, the mountain whites reflecting in the waves, and monks praying, all to get you awestruck on the first sight. You can enjoy horse rides and other recreational activities while you take in the sights.

The lake stretches 70 kilometers from the east to west, and is not only the second largest saltwater lake in China but is also the highest lake in the world! The best time to visit Lake Namtso is from May to September, where the weather is just right- cool enough, but not frozen.

Join in our classic 6 Days Lhasa Lake Namtso Group Tour to appreiciate the beauty of the holy lake.

The Mother of all Holy Lakes, Lake Manasarovar lies southeast of Mount Kailash, around 2000 kilometers from Lhasa. This lake is in Ngari, by far the hardest city to get to and is referred to as “ridge of the roof of the world” by Tibetans. It lies at an altitude of 4,500 meters with a perimeter of 90 kilometers. 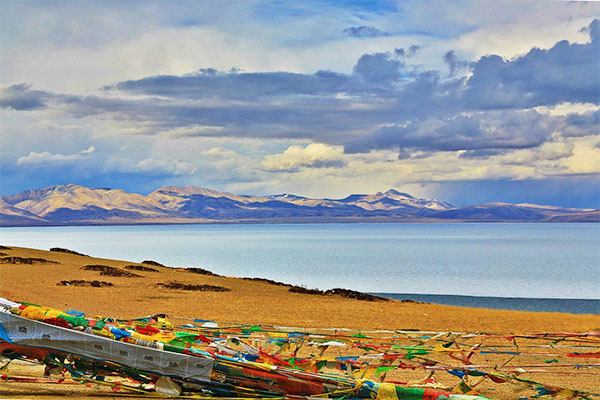 Manasarovar Lake is in Ngari, around 2000 kilometers from Lhasa.

The lake offers the awe-inspiring sight of Mount Kailash reflecting in its still, clear water. On the beach-front, short, protein-filled grass attracts wildlife such as Yaks that give the customer a sense of serenity and peace. The lake also gives a view of the origin of Sutlej which is a sight to behold on its own.

Lake Manasarovar is the holiest lake of the Tibetan region, thought to have the ability to wash away all the sorrow and evilness from anyone who bathes in its water. Manasarovar Lake is best for a visit from early May to the middle of October.

Also known as the Yamzho Yumco, Yamdrok Lake is one of the three largest sacred lakes in Tibet. Spanning over 72km, the lake gives the spectacular view of snow-capped mountains around and numerous streams leading into the lake. 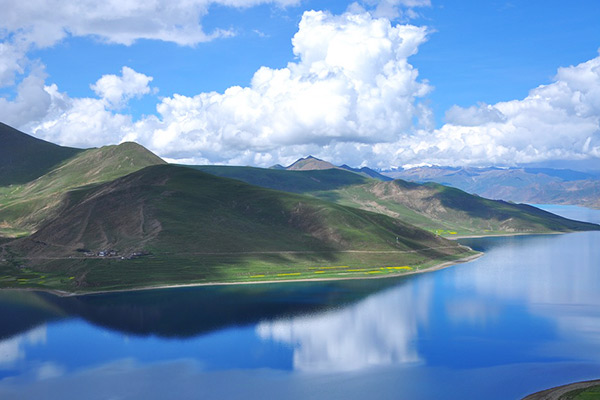 Yamdrok Lake is almost 100km away from Lhasa,that is one of the three largest sacred lakes in Tibet.

It is almost 100km away from Lhasa if you’re coming by road, and along the way you are bound to see a good amount of Yaks, goats and other Nomad life. There is also a village, Baidi, near the lake’s western end where tourists can relax and enjoy company with the locals.

According to local mythology, Yamdrok Lake is a goddess transformed into a lake. The best time to visit Yamdrok Lake is between March and June. There are countless other lakes on the mesmerizing Tibet Plateau, but there is more to see on your visit than lakes, no matter how beautiful they are.

It is the majesty of the mountains which attracts everyone to the plateau. The thought of seeing snow-covered mountain tops can get anyone feeling riled up for adventure.

The Tibet Plateau also contains the Himalayas, which separates the plateau from the Indian sub-continent. The range extends 2400km in length, offering spectacular views of the Nyenchen Tanglha Mountains, the range’s neighbor. The Himalayan range houses many of the highest peaks of the world, including Mount Everest, Mount Kailash and K2, or Mount Goldwin-Austin.

Some of the most popular mountains in the Tibet Plateau are:

Every living person knows about this mountain. Mount Everest is the tallest mountain in the world, with its elevation ranked first at 8,848 meters (29,029 feet). 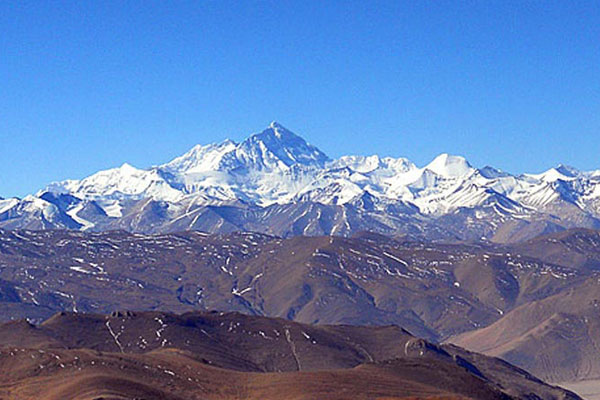 Tibetans call Mount Everest as "Mother of the Worldis", that is the tallest mountain in the world.

Tibetans call it Chomolungma, or Mother of the World. Mount Everest holds a special place in the tourists’ minds as they cross it, endeavoring to climb it one day. In an Everest Base Camp Tour, tourists can get a full view of the highest peaks of the Himalaya Mountains from the Kyawula Pass, one of the most stunning passes on the plateau. Photographers and tourists both jump at the chance to take panoramas of the peaks to enjoy at home. The best time to visit Mount Everest is from April to May and from September to Octover.

Mount Kailash, the Tibet Holy Mountain, is the second highest peak of Gangdise mountain range with an altitude of 6638m. Mount Kailash is regarded as the pilgrimage center by Buddhists, Hindus, and Jains. 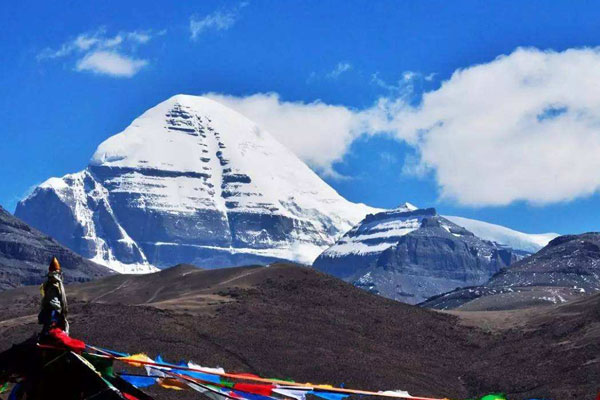 Mount Kailash is the Tibet Holy Mountain with an altitude of 6638m.

Its northern face of the mountain offers a stunning view of black rock covered with white snow, offering a unique perspective to the viewer. The dirt-rock combination of the surrounding area mixed with Lake Manasarovar and Lake Rakshastal at its feet offers a three-biome view available only at selected places on Earth. The road to Mount Kailash from the Tibetan capital, Lhasa, is 955km long.

While taking the Mount Kailash kora, you can feel the spiritual energy along with all the pilgrims and prayers as they take the prayer-flag-ridden road to the mountain. The best time to visit Mount Kailash is between April and October.

The rivers of the Tibetan Plateau flow crystal-clear, where unpolluted water comes straight from mountain-tops. Because of these rivers, Tibet plateau is known as the water tower of Asia, supplying clean water and minerals to the whole continent. The turquoise rivers entice tourists to take a dip into the inviting cool and refreshing water.

Also known as Yalu Zagbu, Yarlung Tsangpo is the longest river in Tibet and highest in the world. The river’s banks offer vistas of trees and hills, cold deserts and arid grasslands as they zig-zag down from the Angsi glacier. 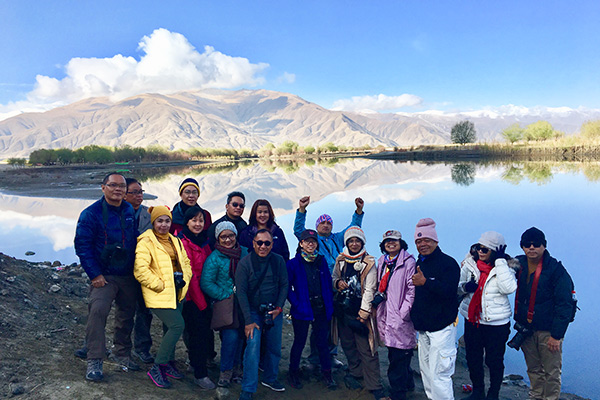 Yarlung Tsangpo is the longest river in Tibet and highest in the world.

The river offers great opportunities for whitewater rafting and kayaking adventures. The river also has the deepest canyon in the world and two waterfalls, inviting visitors and adventurers to take a dip into the cold water for that adrenaline rush.

The Lhasa River originating at Mount Nyanchen is another tourist attraction, running for 495 kilometers. Lhasa River offers Tibetans a place to bathe and wash their clothes in their Bathing Festival, during the seventh month of the Tibetan calendar. 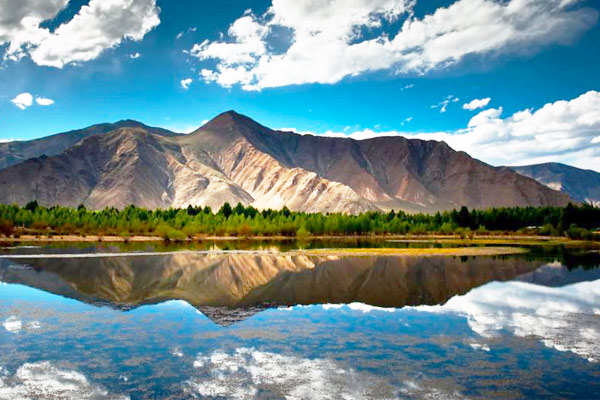 The Lhasa River originating at Mount Nyanchen, running for 495 kilometers.

Tibetans believe that at this time the water of this river becomes holy. Tourists can join them in bathing if they choose. This is another great opportunity for photographers to get stunning photos.

The river’s water is cold all-year-long, so if you wish to bathe with the locals, you should probably take extra precautions not to get sick on your vacation.

Tibet holds one of the five biggest pastures in China. Nurtured by the Black River, the North Grassland of Tibet is a haven for wild animals and plants. Sheep, cows, and yaks can be seen grazing on the never-ending grassland. The grass grown at this altitude has the highest protein content, making the flocks stronger and healthier. You can enjoy the clean air and free wild-life in these grasslands and feel the real environment, as it is supposed to be. These grasslands feature short hills and vast plains that give the viewers a sight to behold. Other Tibetan grasslands include Nagqu Frigid grassland, Changtang grassland, and others.

Everyone who’s been to Tibet will tell you that Tibetans are one of the nicest people you will ever meet. They lead simple lives—raise yaks and livestock, collect milk, collect wood, keep their children fed, keep their houses warm and that’s it.

Despite their simplicity, they have intimate knowledge of the landscape, ways to live and survive with nothing but their hands and other intricate information about mother earth, which in our rush for technology, we can’t even begin to fathom. 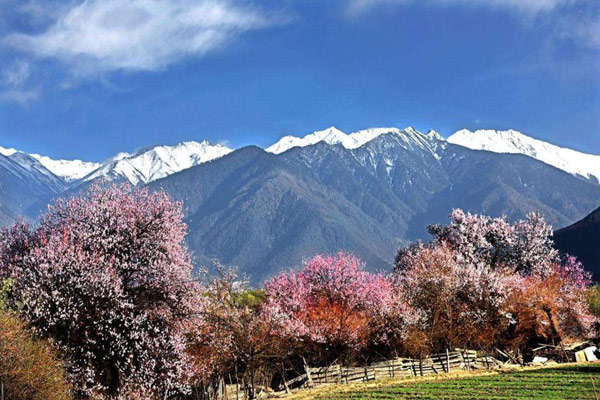 The Nyingchi Peach-Blossom festival starts from March 15th to April 20th each year.

Each year, as spring approached the Tibetans start getting ready for their annual festival. Although most of Tibet is still covered with snow with no sign of melting, Nyingchi gets ready to submerge into a sea of peach flowers.

Tibetans have celebrated this festival since 2002, in which locals and tourists can enjoy not only rosy peach-blossoms and ever-exotic scenery, but also explore other Tibetan villages, enjoy performances and try some delicacies locals prepare only for the occasion! You can have the chance to get to know details about the life-styles of the locals and share delicacies and recipes to remember your trip by.

Tibet has much to offer, from its lush vistas to high mountain peaks, turquoise lakes to running rivers, lavish grasslands to barren desserts — there is something for everyone. If you’re a spiritual person, Tibet can offer you places where you can find your inner self and reflect upon life.