Nepal vs. Tibet: Choose One or Travel to Both

Tibet and Nepal set in the high Himalayan Mountain Range in Southeast Asia. Both are landlocked, without a coast and beaches, but are popular travel destinations for tourists who love to get out into the wilderness and explore, as well as trekkers and hikers. If you are planning a Nepal Tibet tour to explore these Himalaya regions, if you are making a hard choice, whether just to visit one of them, or need a long time journey to both, here are some useful information that will help you plan your lifetime trip to the top of the world.

Differences between Nepal and Tibet

While they have many things in common, such as the Himalayas, Buddhism, and monasteries, they also have their differences. Tibet is a high-altitude plateau region, with an average elevation above 4,000 meters across its entirety, while Nepal is a land of varying altitudes, from the heights of Mount Everest to the lowlands of Chitwan, where elephants and rhinos roam in tropical forests, and crocodiles swim the wild rivers.

Religion is also a point of difference between Nepal and Tibet. Nepal is mostly comprised of Hindus, but there are a significant number of Buddhists and Muslims living in the country. Considering it was the birthplace of Buddha, it is no surprise that Hinduism is the stronger religion, with India as their other neighbor. 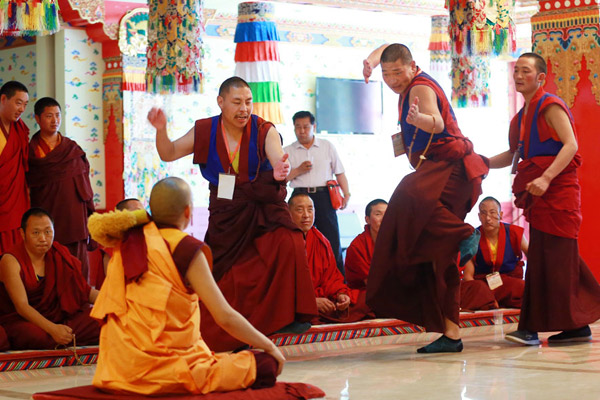 Tibet features a unique kind of Buddhism called Tibetan Buddhism. Based loosely on the Theravada Buddhist teachings of Siddhartha Gautama, the first Buddha, it was introduced to Tibet during the reign of Trisong Detsen, the Tibetan king in the 8th century, and quickly replaced Bonism as the main religion.

Different Everest Base Camp in Nepal and Tibet

The international border between Tibet Autonomous Region and Nepal runs across Everest’s precise summit point. There are two base camps on opposite sides of Everest, South Base Camp in Nepal and North Base Camp in Tibet. These camps are used as temporary campsites by mountain climbers for ascents and descents. Located in the remote southern region of Tibet, the northern base camp is trekked lesser than its southern counterpart in Nepal is. The desolated landscape, its Buddhist monasteries and Tibetan architectures gives an exotic cultural flavor to the tour, making it culturally significant. 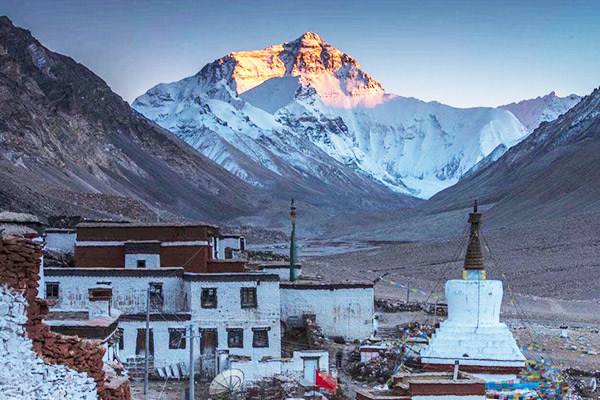 The view of Mount Everest in Tibet from Rongbuk Monastery

At an elevation of 5,150 meters, the Everest Base Camp in Tibet is located about 4km from Rongbuk Monastery, which is the highest Buddhist shrine in the world, while the actual climbers’ Base Camp is at the foot of Rongbuk glacier, higher up on the mountainside. There are also tent hostels for travelers and climbers, offering beds and food, and guesthouses around Rongbuk Monastery also provide rooms for travelers. 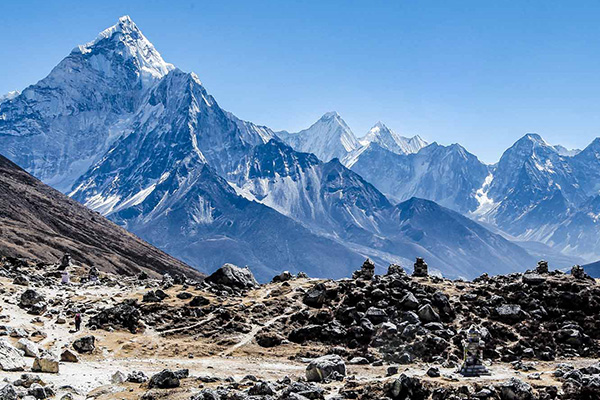 Everest Base Camp on the south side in Nepal

The Everest Base Camp on the south side in Nepal is one of the most popular in the Himalayas and is visited by thousands each year. It is at an altitude of 5,320m, and many climbers and travelers camp there for acclimatization to reduce the risks of altitude sickness. The base camp is mostly dotted with colorful small tents and yellow-roofed huts during climbing seasons, and the otherwise gray/white landscape of the Khumbu Icefall sits on the background. The sunset is the biggest highlight from the South Base Camp.

The unique landscape of Tibet needs no elaborate explanation—a glance at a topographic map of the world tells you all. The plateau has a very distinct and protruding landscape that clearly separates itself from the rest of the world with its boot-like feature. Tibet has a protruding geographical formation, and it is the highest region on earth, with an average elevation of 4,900 meters. That’s why it is praised as the Third Pole on the Earth. 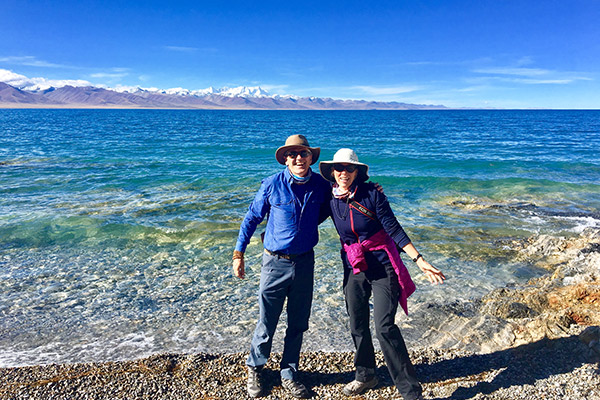 Lake Namtso in Tibet is quite popular among tourists

Tibet has some of the most beautiful natural sceneries in the world. Many people draw the comparison of Tibet with Shangri-La, the mythical Himalayan utopia. With the plateau offering a completely breathtaking experience to its visitors from across the globe, Tibet has already claimed its spot as one of most of exciting travel destinations of all time. The holy Lake Namtso, the great Mount Everest, the sacred Mount Kailash and the vast northern Tibet grassland… all are the unique beauty you can just see in Tibet. 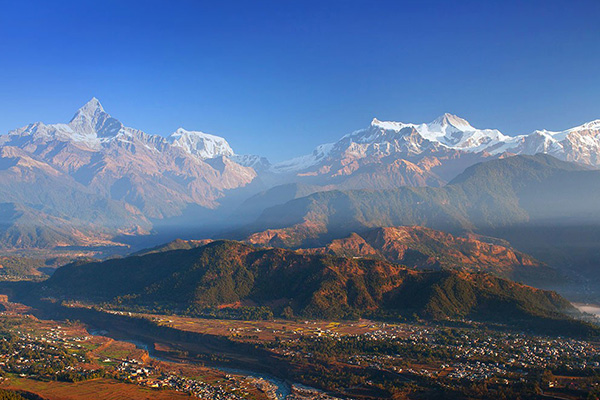 Compared with Tibet, Nepal offers more kinds of landscapes, from the low-lying terrain in the southern Nepal to the hills region and the Himalayas of Nepal. The various kinds of landscapes provide more adventures in Nepal. To the geology enthusiast and outdoor adventurer alike, this relatively small country beckons with a staggering collection of landforms.

Nepal is named for the Kathmandu Valley, where the nation's founder established a capital in the late eighteenth century. Nepali culture represents a fusion of Indo-Aryan and Tibeto-Mongolian influences, the result of a long history of migration, conquest, and trade. The culture of Nepal has many symbols from Hindu and Buddhist sources. 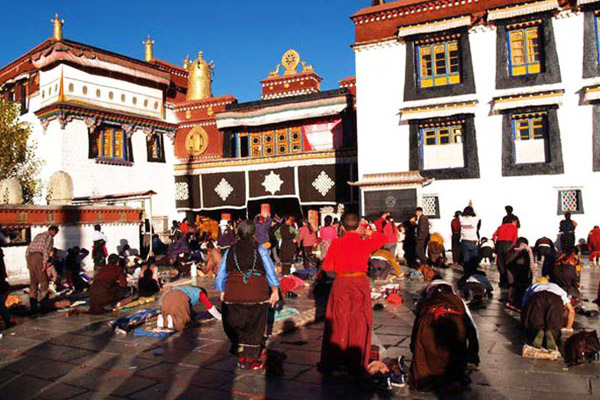 Tibetan people prostrating themselves in front of the holy Jokhang Temple

Tibetan culture and identity is inseparably linked to Tibetan Buddhism. Religious practice and Buddhist principles are a part of daily life for most Tibetans. Over the centuries, Tibetan culture was developed due to both internal and external factors. The cultural influence of the neighboring areas also played an important role in the development of Tibetan culture, including Nepal, India, Bhutan, China, and Mongolia. Later, in the 7th and 8th centuries, the introduction of Buddhism from India exerted a deep influence over the whole plateau, and since then Buddhism became an indispensable part of the Tibetan culture. Gradually, cultural variations came to exist due to the regional, geographical, and environmental distinction in different parts of Tibet.

Since then, its geographical remoteness and inaccessibility had isolated the region from the rest of the world, and preserved its rich and indigenous culture without any influence from the outside world in terms of modernization.

Better to visit Nepal or Tibet, or Travel Both?

Both Tibet and Nepal has some of the world’s best things to explore. It is hard to say which one can take the place of the other one. If time permit, why you not to visit Tibet and Nepal together to explore the similarity and the difference of these two mysterious lands by yourself. 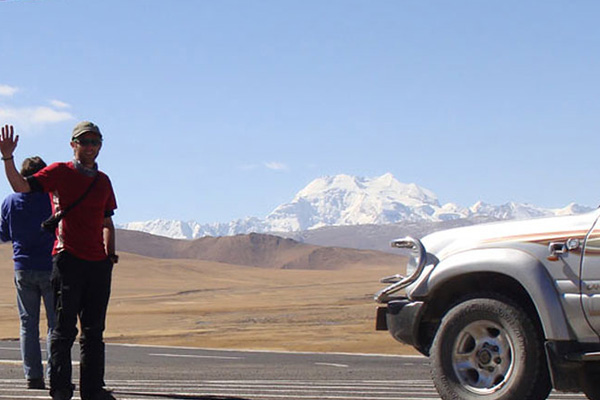 Take an overland tour from Kathmandu to Lhasa

A tour of Tibet from Nepal is one that gives you amazing views of the Himalayas from both the Nepal side and the Tibetan side. As an overland drive from Kathmandu to Lhasa, you will get to see the change in scenery from the Kathmandu Valley as you climb up into the high Himalayas, crossing the overland border at Gyirong port. Then it is on to Shigatse, Tibet’s second largest city, Gyantse, the site of the famous Pelkor Monastery, and on to Lhasa, where you will tour the Potala Palace and the Jokhang Temple, Tibet’s most sacred site.

Things to Know before a Nepal Tibet Tour

To apply for the Tibet Travel Permit is the most important thing before your Tibet tour. If you plan to enter Tibet from mainland China, you need to obtain a Chinese Visa, and then apply for the Tibet travel permit for entering Tibet. For tourists who wish to travel to Tibet from Nepal, a Group Tourist Visa will need to be issued from the Chinese Embassy in Kathmandu. Also, the Tibet Travel Permit is required for entering Tibet from Nepal.

Overland tour between Nepal and Tibet is highly recommended

For many foreign tourists, a tour in the Himalaya region incorporates both Tibet and Nepal, and with the opening of the border crossing at Gyirong Port, overland trips from Lhasa to Kathmandu, and vice versa, are more popular than ever. Including the best of Tibet, from the high mountains to the great lakes, as well as the exotic city of Kathmandu, and the temples of Pashupatinath and Boudhanath, a trip overland from Tibet to Nepal is a wonderful adventure covering two distinct peoples and cultures.

There are flights between Kathmandu and Tibet

Aside from the border crossing at Gyirong Port, Nepal also has a direct link with Tibet by plane. Traveling by air is the easiest and most convenient way to get from Nepal to Lhasa, and thanks to the direct flights that are available, it is now even easier. To date, there are only three airlines that run flights from Kathmandu to Lhasa, Sichuan Airlines, Air China, and relative newcomer, Tibet Airlines.

The Best time to visit Nepal and Tibet

For both Nepal and Tibet, when to go is a question of priorities. Both Tibet and Nepal have their peak tourist season between June and October, and the low season is always the winter. Since Tibet is normally closed in February and March, April is the start of tourism in Tibet, and is the first shoulder season. For the cheapest tours, you would need to visit Tibet and Nepal between November and the end of January, when the tours are cheapest, hotels and restaurants have reductions, and there are a lot less people.

If weather is not an issue for you, then traveling in the off-peak months is much cheaper, and can make all the difference to your budget. You may experience a few delays if you are traveling in January, since the mountains often see snow at that time of year, but overall, the snow is rarely much of a hindrance these days. Roads across Tibet are much better now, and the crossing at Gyirong Port rarely gets blocked by snow. In Nepal, once you drop down from the border fort of Rasuwagadhi, snow is never seen, and within an hour of traveling in Nepal, you would be in lush, dense, forests on the way to Kathmandu.

0 Comment ON "Nepal vs. Tibet: Choose One or Travel to Both"