In order to better help you plan your life-changing trip to Tibet, at the Roof of the World, we have put together a collection of maps and details about Tibet and Nepal, their locations, how to get there, the best places to visit, and other places that can be included in a tour.

Delve into the fascinating world of mountain lore and Tibetan and Nepalese cultures, while visiting the fabled cities of Lhasa, Shigatse, and Kathmandu. Take in some of the most magnificent mountain vistas on Earth as you journey across the Tibetan Plateau to the North Face Base Camp of Mount Everest and into Nepal. 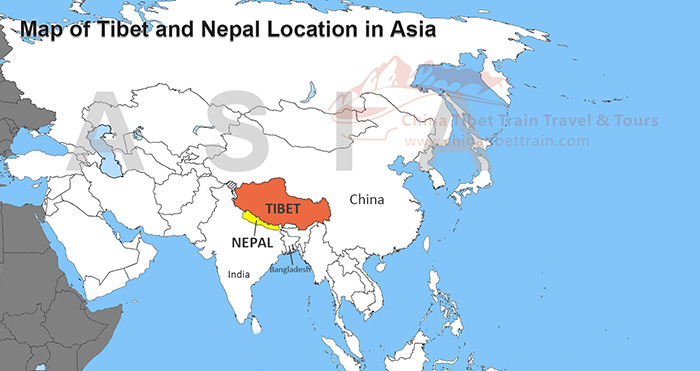 Map of Tibet and Nepal Location in Asia

Tibet and Nepal are the closest of neighbors, sitting atop the mighty Himalayas, in Southeast Asia. Sandwiched between mainland China and the Indian sub-continent, these two landlocked regions have been hidden from the world for decades. Famous for being the location of the highest mountain in the world, Mount Everest, and the holiest and most sacred Hindu and Buddhist site, Mt. Kailash, Nepal and Tibet are lands full of mystery and mysticism, with unique cultures that are intertwined with their respective religions.

While Nepal only has India and Tibet on its borders, Tibet also has borders with India, Bhutan, and Myanmar. Moreover, while they may be the closest of neighbors, both the culture and the landscapes are very different, resulting in a combined trip to Nepal and Tibet being one of the most amazing journeys ever.

How to Travel to Tibet from Nepal

Getting from Nepal to Tibet can seem extremely difficult, although in reality, it is very easy, with open relations between the two, and easy border crossings and flights from their respective international airports.

There are two main ways to get from Nepal to Tibet. You can take a flight from Tribhuvan International Airport in Kathmandu, Nepal, or you can travel overland, crossing the border at Gyirong port, high in the Himalayas, before traveling across the region to the capital city of Lhasa. 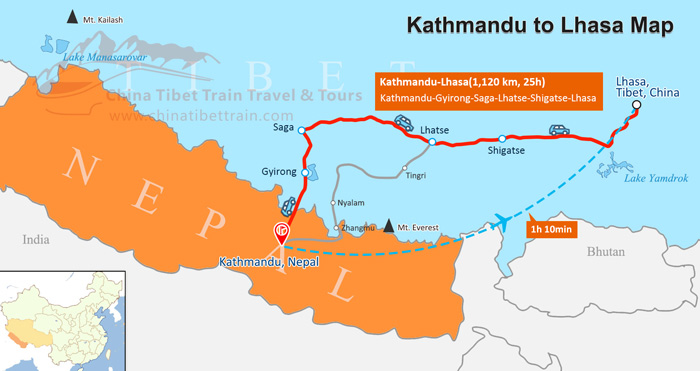 The overland journey between Nepal and Tibet covers a distance of 1,120 kilometers, and can take anywhere from 8 to 15 days, depending on what you want to see during the trip. The border is around 85 kilometers from Kathmandu, along a rutted, narrow road, which leads up to the border checkpoint at Rasuwagadhi. From there it is a short crossing to the Chinese side of the border, over the Resuo Bridge, where your tour guide will be waiting to transport you to Gyirong Town. From there, it is a long journey to Lhasa, passing by some of the most spectacular landscapes in the world, and taking in such amazing sites as Mount Everest Base Camp, Rongbuk Monastery, Shigatse, Gyantse, and Lake Yamdrok. 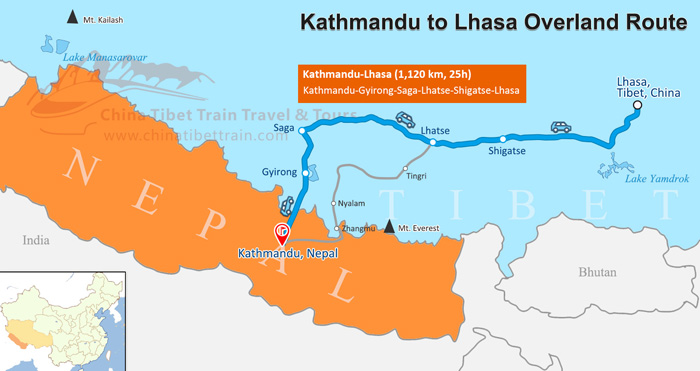 Flights run daily with Air China, leaving in the morning and getting you into Lhasa just after lunch. Sichuan Airlines and Tibet Airlines operate on only three days a week, Monday, Wednesday, and Friday, and they run in the mornings as well. The flight time from Kathmandu to Lhasa is just an hour and ten minutes, and if you get a seat on the correct side of the plane, you get an impressive view of Everest as you fly over the Himalayas.

It is also possible to get connecting flights from Nepal to Tibet, which go through Chengdu, Kangding, or Chongqing, although the flight times with the connections can be up to 20 hours. 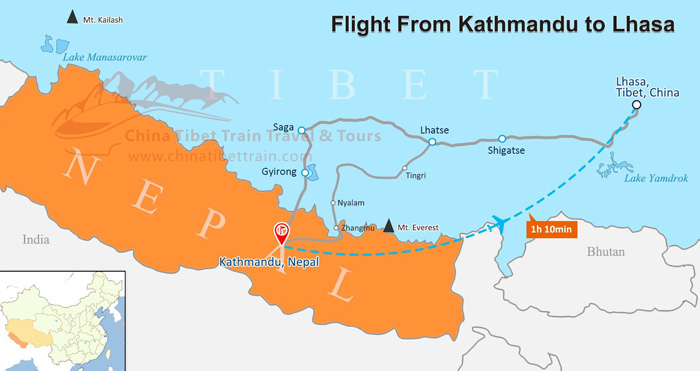 Maps of Mount Everest in Nepal and Tibet 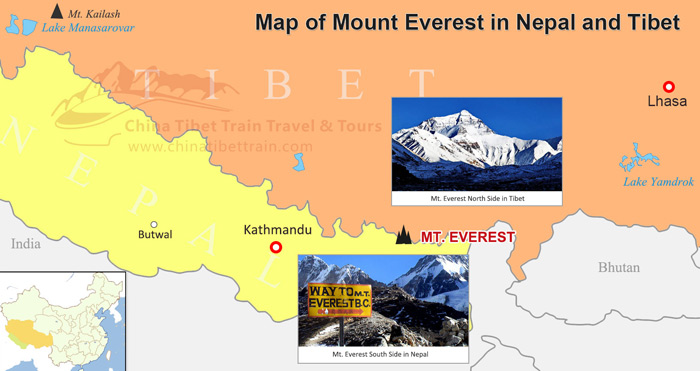 Map of Mount Everest in Nepal and Tibet

One of the greatest sights of any tour in Tibet or Nepal is the spectacular Mount Everest. Standing 8,844 meters above sea level, it is the highest mountain in the world, and has a unique attraction for visitors who desire to visit the base camps and gaze upon this majestic peak. Sitting exactly on the border between Tibet and Nepal, Everest is the crowning glory of both in terms of tourism. Base camps exist on both sides of the mountain, although the Tibetan base camp is easier to access, and the road goes all the way, while the Nepal base camp requires a trek of 12 days to get to it.

More Things to Do in Nepal and Tibet

There are many attractions in Tibet that are going to thrill and amaze you, and visiting the monasteries, lakes, and sacred sites is a beautiful experience. Lhasa is the capital of Tibet, and the center of Tibetan Buddhism. With its famous Potala Palace and the sacred Jokhang Temple, it is the highlight of the region.

Lake Namtso is one of the four Holy Lakes of Tibet, and is known as the “Heavenly Lake”. It is the largest lake in Tibet, and the second largest saltwater lake in China. At an elevation of 4,470 meters, it is the highest lake in the world, and is supplied by the Nyenchen Tanggula Mountains.

Lake Yamdrok, one of the three holy lakes in Tibetan Buddhism, has beautiful, turquoise waters, and at 4,400 meters above sea level, the lake lies nestled between lofty mountains.

Mt. Kailash is the holiest mountain in Tibetan Buddhism, as well as Hinduism, Bonism, and Jainism. The name means “mountain of the god”, and it is one of the holiest sites in the world.

Lake Manasarovar is one of the three holy lakes of Tibetan Buddhism, and is the highest freshwater lake in the world at 4,590 meters. It is also a site of pilgrimage for Buddhists and Hindus from all over the world.

Rongbuk Monastery is the highest monastery in the world, at 5,000 meters above sea level, and is part of the Nyingmapa Sect of Tibetan Buddhism, and is unique in that both monks and nuns live together in the same monastery.

Everest Base Camp (EBC) is one of the most popular sites in Tibet for foreign visitors, and the views of the world’s highest mountain are spectacular. 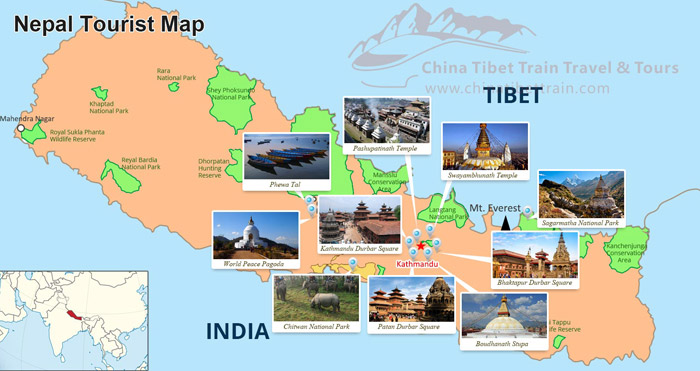 Across the border in Nepal, there are just as many amazing attractions, and very different ones from the Tibetan plateau. Choose from stunning alpine treks, ancient Hindu temples, old Royal Palaces, and sub-tropical nature reserves.

The Buddhist temple of Swayambhunath in Kathmandu is one of the most sacred sites in all Nepal, and is a place where local Buddhists come to perform ceremonies and to pray. Also a temple attracts pilgrims from Tibet and beyond, the top of the stupa is in the shape of a square with four sets of Buddha’s eyes – one on each side.

Boudhanath is the largest stupa in Nepal and perhaps the most important. In 1979, it became a UNESCO World Heritage Site along with a number of other monuments in the Kathmandu Valley. Boudhanath shelters over 16,000 Tibetans who have made Nepal their home. Believers walk in a clockwise direction around the stupa to pay their respects and have their wishes granted. For Buddhist people it is a daily ritual to walk three or more times around the stupa while repeating a mantra, either quietly or aloud.

Pashupatinath is located in the Kathmandu Valley and is where Nepal’s most important Hindu temple stands on the banks of the holy Baghmati River. Sadhus and devotees of Shiva flock to Pashupatinath from across all of Nepal.

Chitwan National Park is one of the premier draw cards in Nepal. Meaning ‘Heart of the Jungle’, Chitwan is famous as one of the best wildlife-viewing national parks in Asia, and you have an excellent chance of spotting one-horned rhinos, deer, monkeys and up to 544 species of birds. If you are extremely lucky, you will see leopards, wild elephants and sloth bears – though it is the once-in-a-lifetime chance to spot a majestic royal Bengal tiger that attracts people in their droves. 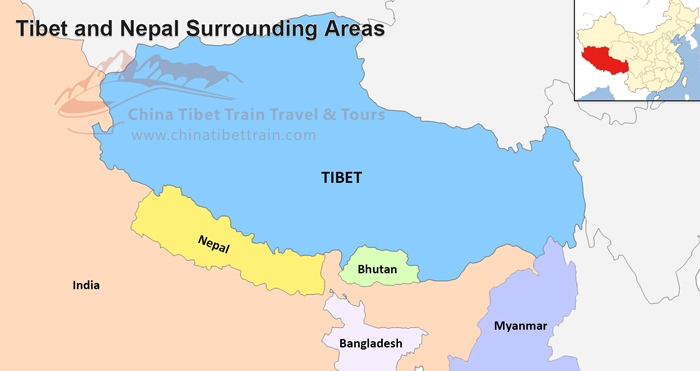 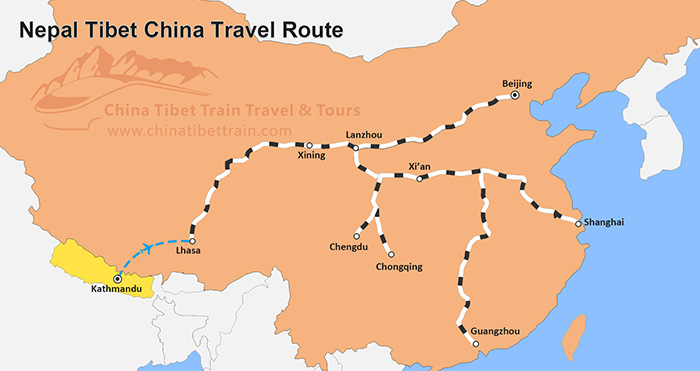 Starting from Nepal, you can travel across the border and journey overland to Lhasa, visiting such sights as Everest, Mt. Kailash, lake Manasarovar, Shigatse, Gyantse, and Lake Yamdrok, on the way to Lhasa. After spending a few days in Lhasa, exploring the famous Potala Palace, the ancient and sacred Jokhang Temple, and the monasteries of Sera and Drepung, it is time to take the train to China.

Tibet trains from Lhasa run to seven major gateway cities in China, including Xining, Chongqing, Chengdu, Guangzhou, Beijing, Shanghai, and Xi’an. Once in China, you can spend time exploring this ancient culture, and visiting amazing places such as the Summer Palace and the giant panda reserve. 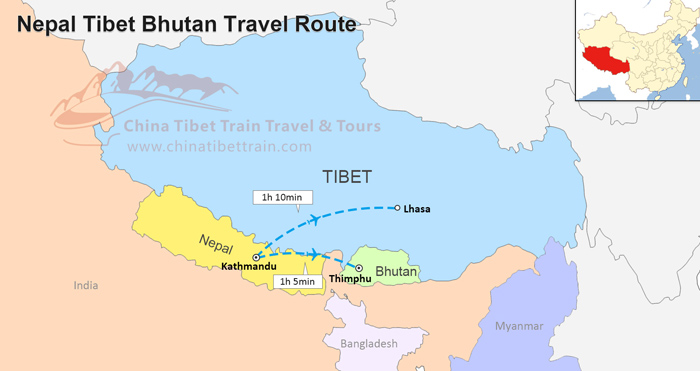 Explore Nepal’s capital city of Kathmandu, an unforgettable melting pot of Hindu and Buddhist cultures. Then take a flight to the ancient and beautiful Himalayan Kingdom of Bhutan. It will feel as if time stood still, as you explore the pastoral back roads of Bhutan, a true bastion of tradition in an uncertain world. You will visit the Shangri-La setting of the Paro Valley, the central Bhutanese town of Punakha, with its huge, spectacular monastery set by the river, and the capital city of Thimpu.

Then it is a flight back to Nepal, and on to Lhasa, before taking an overland tour across the Tibetan plateau, exploring the sights and sounds of this unique landscape, and experiencing the delightful and friendly Tibetan culture. Then you cross the overland border back to Nepal, and drop over 4,000 meters to the Kathmandu Valley, and the end of the tour. 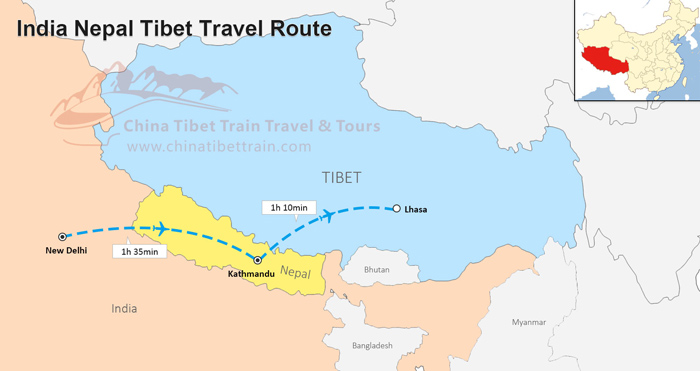 This adventure begins in Delhi, India where you will get to see the famous and majestic Taj Mahal, and the green Ganges River. Then it is on to the Kathmandu Valley and Nagarkot in Nepal, where you can explore the trekking trails of the Himalayas, and the exotic city of Kathmandu. After your visit to Nepal, it is up to the border, where you will then take a high-road overland trip to Lhasa in Tibet, driving on one of the world's most beautiful, picturesque highways.