Traveling from Nepal to Tibet has always been a popular route for tourists and pilgrims to the Tibet Autonomous Region, and for many years, the border crossing between Kodari and Zhangmu was the main source of overland tourism to Tibet. It was also the route taken for those tourists that finished their tours in Tibet and wanted to continue their Asian travels in Nepal.

Rasuwa - The New Port for Nepal to Tibet Border Crossing

Lying in the high Himalayas, around 120 kilometers directly north of Kathmandu, the Nepali capital, Rasuwa Gadhi is the small ancient fort that lies on the border with China’s Tibet Autonomous Region. In the Rasuwa District of Nepal, the historic ruined fort lies alongside the Trishuli River Gorge, around 20 kilometers north of the small town of Timure, which lies in the Langtang National Park. 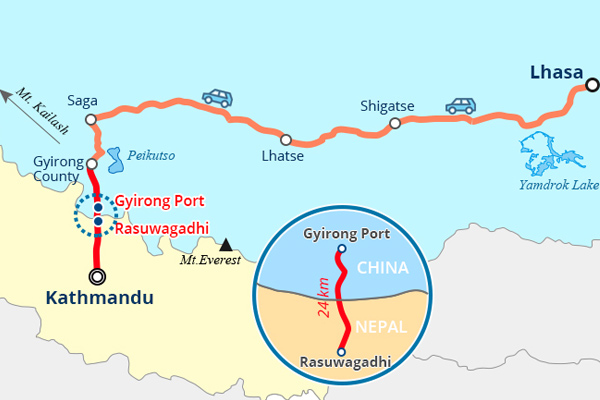 The Nepal Tibet border crossing can really only be done during daylight hours, as the Chinese Immigration office on the Gyirong site in Tibet is only open from 10:00am to 5:30pm, though it is open seven days a week. However, it is a six-hour drive from Kathmandu to Rasuwa Fort, so it is unlikely that you would get there before 10:00am, as the buses do not leave that early in the morning. Please pay attentions to your arrival time when you take a Tibet Nepal tour by overland.

How to Get to Rasuwa from Kathmandu

Getting to the border from Kathmandu can be done by private vehicle or by public bus, and the choice is mainly decided by most tourists traveling the route based on cost.

The bus from Kathmandu to Rasuwa Gadhi costs around 700 rupees, which is around US$ 10. The trip takes around six hours, and stops for a light lunch on the way. From Kathmandu, the normal route for both buses and cars heads northwest to Bidur, then north along some less well-paved roads to Rasuwa Fort, passing through the edge of the Langtang National Park for the last 30-40 kilometers.

There is also the option of taking the local jeeps to Rasuwa Fort, which is run once a day by local drivers. The cost is a little higher, but not as expensive as a private car, since you will share the jeep with other travelers. However, there is no guarantee that you will leave with a full jeep, so you may have to wait or find more passengers yourself if you do not want to pay the additional costs for the empty seats. The cost for each seat on the jeep is normally around 1,100 rupees, or US$ 16.

If you are traveling alone and do not fancy the experience of riding the bus, with its crowds of tourists and locals with crates of chickens, then the private car is the best option, rather than paying for all the seats of the jeeps. Hiring a car to self-drive is not permitted in Nepal, so you will need to get the car and driver. The average cost of a car and driver is normally around US$ 50 per day. However, for the direct trip to Rasuwa Fort, a service car from a good agency will only cost you around 2,500 rupees, which is around US$ 37, a lot less than four seats in a jeep.

If you are traveling to Rasuwa Fort, then you are most likely to be continuing on to Tibet, which means that there are a certain number of permits and papers that you will need to have before you can cross the border. China does not have a Visa on Arrival service, and since the standard visa cannot be used from Nepal, you will need help to get the paperwork all sorted.

The Group Tourist Visa is he visa that you need to get when traveling to Tibet from Nepal, instead of the standard Chinese Entry Visa. This cannot be applied for personally, as it is only issued to tourists on a pre-booked tour to Tibet. You will need to be in Kathmandu at least five days before your expected departure date in order to process the visa, and once you arrive, we will meet you at your hotel to get your passport to make the application on your behalf. The process takes three working days, and once completed, we will bring your passport and visa back to you at your hotel.

The Tibet Travel permit is the main permit for traveling to Tibet, and you cannot get anywhere without it. The permit is obtained by us in advance of your trip, and takes around 20 days to process with the Tibet Tourism Bureau in Lhasa. Once you have booked your tour, we will need scanned copies of your passport in order to make the application for you. The Tibet Travel Permit is required for travel into Tibet and around the Lhasa area. 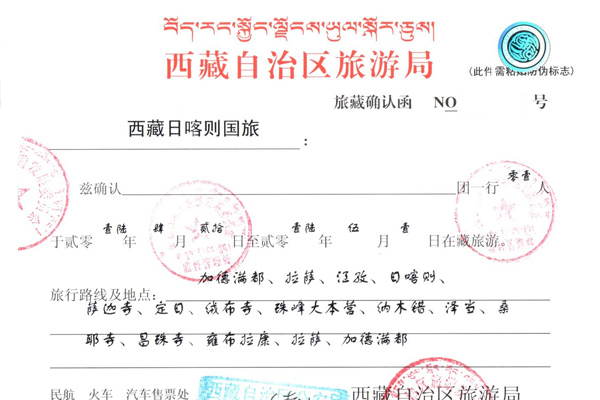 Alien’s Travel Permit for passing through the Mount Everest Area

The Alien’s Travel Permit is required for all tourists that are traveling outside the area of Lhasa, which includes those crossing the border from Nepal and traveling to Mount Everest. The permit is applied for in Lhasa, and we will use the scanned copy of your passport from the Tibet Travel Permit application to apply for it on your behalf.

The Frontier Pass is required for all tourists traveling through areas close to China’s Tibetan border regions, such as he borders with Nepal, India, and Bhutan. It is obtained in Lhasa by us prior to your trip, and will be given to you once you arrive in Nepal.

Rasuwa to Everest Base Camp

Traveling from the border checkpoint of Rasuwa Fort to Everest Base Camp follows the route of all tours for the first part, from Rasuwa Fort across the border to Tibet and then on to Gyirong Town, the first stop. From here, the way split, depending on where you are going in Tibet. For EBC, you will travel along the G214 going east until you reach the junction for the G318 Friendship Highway. 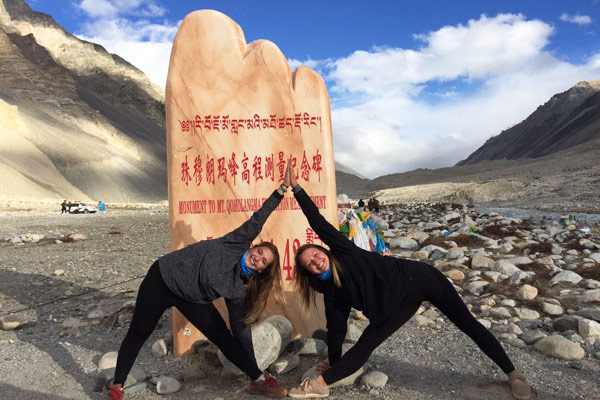 The Friendship Highway will take you to Ganggazhen, also known as Old Tingri, where you will turn south onto the S218 which takes you to Rongbuk Monastery and Everest Base Camp. Unlike the base camp in Nepal, the Everest Base Camp in Tibet can be reached by road right up to the actual camp itself.

>> See the detailed travel itinerary from Kathmandu to Lhasa via EBC

If you are traveling from Rasuwa Fort to Lhasa, then you will follow the same route for some of the journey. Instead of turning off to follow the S218 to Mount Everest, you will continue along the Friendship Highway to Lhasa, traveling through Shigatse City and Gyantse along the way. 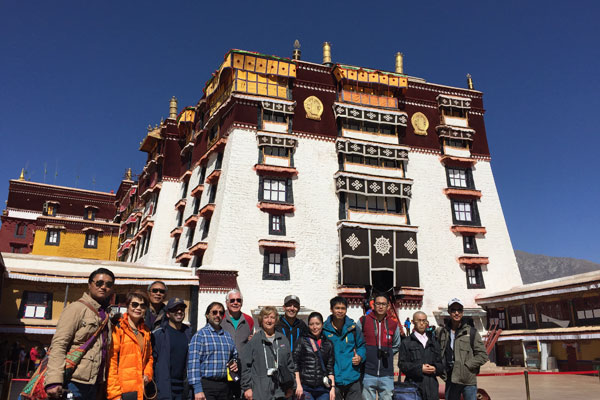 Visit Potala Palace while traveling from Nepal to Tibet

The route from Rasuwa to Lhasa is around 900 kilometers long and can take around three days to traverse. You will stop for the night first at Gyirong Town, then again in EBC (if you are going there) and at Shigatse itself. From Shigatse, it is a straight run to Lhasa, though you can make a detour to Lake Yamdrok, to the southwest of Lhasa, by turning off the Friendship highway in Shigatse, and traveling through Gyantse.

Traveling to Mount Kailash from Rasuwa Fort is a journey in the opposite direction to that of Lhasa and Mount Everest., Mount Kailash lies in the northwest of Tibet, in Ngari Prefecture, and from Lhasa, it is a long journey. However, from Rasuwa, it is a mere 680 kilometers to the sacred mountain. The route will travel to Gyirong Town, the same as before, but then you will turn northwest, and take the road known as the Jiaji Line to Satay County, where you will join the G219. 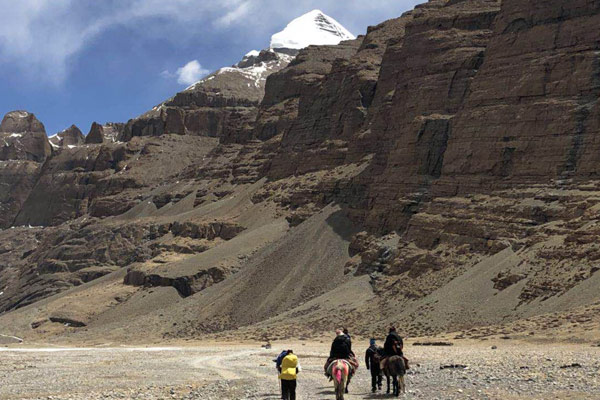 Following the pilgrimage route of out kora around Mount Kailash

Following the G219, you will drive northwest for around 489 kilometers, passing through the towns of Saga and Zhongba along the way. The road follows the course of the Yarlung Zangbo River for much of its route northwest, and you will pass by a huge number of small and large lakes along the way. The last lake you see before you turn off to Darchen, at the foot of Mount Kailash, is the Manasarovar lake, one of the great three holy lakes of Tibet, and an important lake in both Buddhist and Hindu religions.