How to Travel from Nepal to Tibet by Road

There are many ways in which one can travel to Tibet, by flight, by train, and by road. While the train is an amazing journey, it is quite long, taking from 22-55 hours to reach Lhasa, the center of Tibet. Flights can also be useful, especially for those who are strapped for time, as most of the flights into Lhasa take up to 6-7 hours at most, with the shortest being just 90 minutes.

However, driving to Lhasa in Tibet is an adventure in itself, and while the roads from mainland China to Tibet can be traveled as an awesome adventure, the best road route to Lhasa is the one that starts in Nepal. The route from Kathmandu, the capital of Nepal, to Lhasa is one that is not only adventurous, but has other advantages over flying and taking the train. Not the least of these is the experience of traveling over the border at the Gyirong crossing checkpoint, which crosses the stunning Trishuli River Gorge on the Resuo Bridge. One of the most beautiful sights of the lower Himalayas, the gorge runs deep below the bridge, with plant-covered sides dropping down to the rushing river far below.

The route from Kathmandu to Lhasa is long and winding, covering more than 1,000 kilometers up into the Himalayas and across the vast expanse of the Tibetan plateau. Starting in Kathmandu, which lies at an elevation of just 1,400 meters, the route heads northwest along winding roads to the small town of Bidur, 65 kilometers from the Nepali capital. From there the road turns north through Laharapauwa, where it enters the Langtang National Park. Continuing north, the route passes through the town of Dunche on its way to Rasuwagadhi Fort, the Nepali side of the Resuo Bridge and the immigration point for people entering Nepal from Tibet overland. 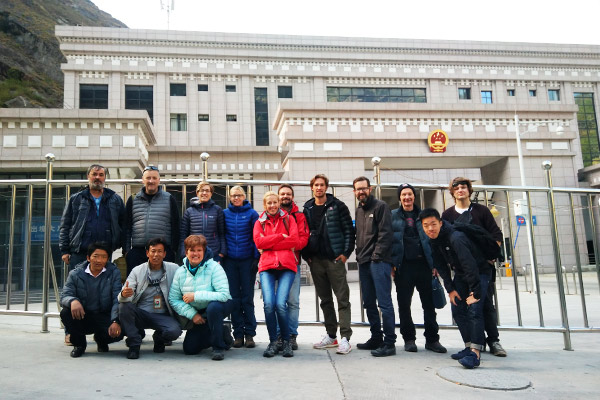 Meeting with the local Tibetan guide after crossing the border at Gyirong Port.

Once past the border crossing and into Tibet, where your guide and driver will meet you, the first stop is at Gyirong Town (2,800m), 24 kilometers from the border. A small town, there is little to see but the amazing landscape and the lush green valley in which it lies. The town has grown as a stopping point for tourists heading across the border in both directions thanks to the opening of the Gyirong Port border checkpoint in August 2017.

After Gyirong Town, the Kathmandu to Lhasa overland journey continues to head north for a short distance, before turning east on the S214 Provincial Road and passing a series of three lakes, each smaller than the last. Peiku-tso is the first and largest of the three, followed by Langqiang Co and Baikuimai Co, as the road heads on eastwards. Shortly after passing the lakes, the route turns onto the G318 National Road, also known as the Sino-Nepal Friendship highway, which runs all the way to Lhasa.

For those visiting Mount Everest, Old Tingri (4,300m), a short distance from the place where you joined the G318, marks the turning for the world’s highest mountain. Most travelers to Tibet that cross the plateau overland from Kathmandu to Lhasa stop at the Everest base Camp (EBC), to view and photograph this unique mountain.

After visiting EBC (5,200m), it is then back to the Friendship Highway and on eastwards to the second city of Tibet, Shigatse, at 3,830 meters above sea level. Home of the Tashilhunpo Monastery, the only monastery in Tibet that houses three separate schools of Tibetan Buddhism, Shigatse is one of the most stunning cities in Tibet, after Lhasa itself. 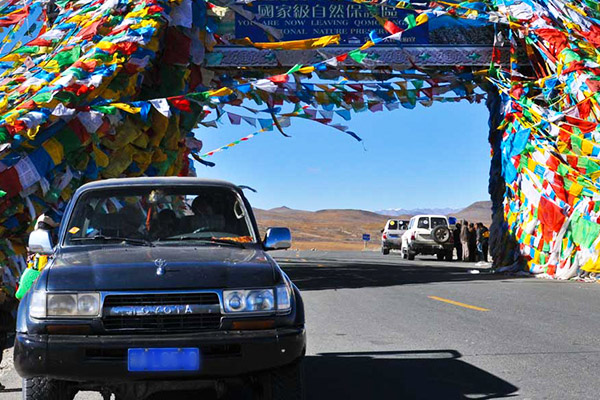 Driving back to Friendship Highway to move to eastern Tibet after visiting EBC.

From Shigatse, the route separates from the Friendship Highway for a spell, as it heads along the S204 Provincial Road to the town of Gyantse (4,000m), which lies on the banks of the Nyang River, the longest tributary of the Yarlung Tsangpo River. Noted for the famous 32 meter-high Kumbum, a stupa with multiple tiers and 108 chapels, Gyantse is the home of the Pelkor Chode Monastery, the most important center of the Sakya School of Tibetan Buddhism.

After Gyantse, the route takes the S307 provincial Road, which takes you past the stunning Lake Yamdrok. One of the Great Three holy lakes of Tibet, Yamdrok is a spectacular sight, and the road runs alongside the western shore before turning north to Dagaxiang, where it rejoins the Friendship Highway. From Dagaxiang, the route heads through Quxu as it heads north, following the route of the beautiful Lhasa River until you reach the Tibetan regional capital, which lies at an elevation of 3,560 meters.

For those traveling from Nepal to Tibet along the Friendship Highway via Gyirong port, there are certain permits and documents that are required before you can leave Nepal. These are normally obtained by your tour operator and can only be applied for once you have booked a Tibet tour.

The Tibet Travel Permit is the primary permit for all travelers to Tibet, and it is impossible to even board a flight or train to Lhasa without first showing the permit when boarding or checking in. For those traveling overland from Kathmandu, you will need the permit to show to the immigration officials at the border crossing at Gyirong Port.

The permit is applied for by the tour operator once you have booked your Tibet tour, and requires photocopies of your passport pages in order to process the application. Once it has been obtained, it will be used to obtain the other permits and visas required once you arrive in Kathmandu. The permits you need to travel across the border also include the Alien’s Travel permit, for travel outside Lhasa within Tibet and the Frontier Pass, which is needed for everyone traveling in Tibet near the borders with Nepal and India.

Instead of applying for a Chinese Entry Visa at the Embassy of the People’s Republic of China, traveling into Tibet from Nepal means that you need to have what is known as the Tibet Group Tourist Visa. This is issued by the Chinese Embassy in Kathmandu and is applied for by the tour operator once you arrive in Kathmandu. The application requires your original passport, as well as the Tibet Travel Permit and a completed application form.

Processing of the visa normally takes around three working days, so it is recommended that you arrive in Nepal at least five working days before your expected date of departure for Tibet. Our local office in Kathmandu will collect your passport and completed application form and make the application on your first morning in Nepal. The visa is normally ready for us to collect on the third day, after which we will deliver it to you for you to start your trip to Rasuwagadhi Fort and Gyirong Port.

The route of Tibet-Nepal highway is one of the most beautiful stretches of Tibetan landscape on the plateau, as well as the stunning, if a little scary, trip from the Nepali capital to the border. Getting there can be done by public bus or private car and takes around six hours on mostly gravel and dirt roads that are only single lane.

Beautiful Gyirong Gorge at the Edge of the Himalayas

Lying in the Himalayan foothills Gyirong Valley is one of the least known of all the stunning valleys in Tibet and is said to be the most beautiful valley on the entre plateau. The entire region of the valley, which stretches for more than 100 kilometers, is filled with alpine bushes and trees and rising mountain peaks, with villages and farms spread along its length. Starting at around 1,700 meters at its southern end, the valley rises in altitude to around 7,000 meters in the north, and this relatively closed valley has a unique ecosystem that changes as the altitude increase. 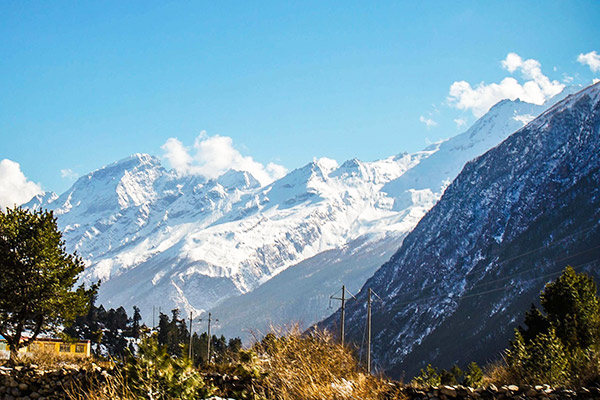 Gyirong Valley is one of the least known of all the stunning valleys in Tibet.

A stunning lake in Shigatse prefecture, Lake Peiku-tso lies alongside the S214 Provincial Road just after Gyirong Town. At 4,591 meters above sea level, the lake is shaped roughly like an hourglass and is surrounded by 6,000+ meter mountains. While still stunning, the brackish water of the lake shows that it has not overflowed into the Yarlung Tsangpo River for thousands of years. 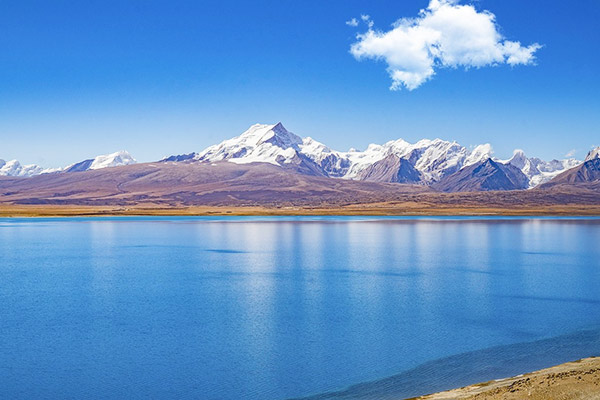 When driving across Lake Peiku-tso, one can see the snowy Mt. Shishapangma in the distance.

From the road that runs past the three lakes, a southward look shows the massive height of Mount Shishapangma in the distance, around 30 kilometers south of the road. The 14th highest mountain in the world, and the fifth highest in Tibet, this 8,027 meter-high mountain is the highest mountain that is wholly in Tibet and the last of the 8,000+ meter mountains to be climbed in the Himalayas, mainly due to its remote location.

On the road to EBC, the route passes over the Gawula Pass, one of the highest passes in Tibet at 5,198 meters above sea level. The view from the top of the pass is one of the most stunning in Tibet, with a panoramic vista of the Himalayas that stretches from Mount Shishapangma in the west t Mount Makalu in the east, including Mount Cho Oyu and Mount Everest in between. It is also one of the best places to get an uninterrupted view of Mount Everest with the rest of the Himalayas in the background. 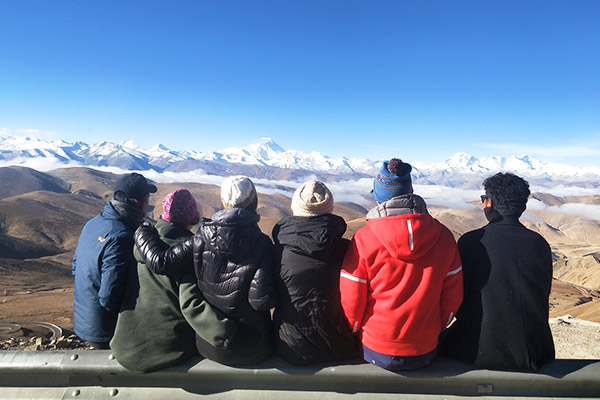 The Himalayas view from the top of Gawula Pass is one of the most stunning in Tibet.

Stay Overnight at Everest Base Camp

Everest Base Camp (EBC) is one of the most popular tourist spots in Asia, and sees thousands of travelers stopping during their tours of Tibet. More easily accessible than its southern counterpart in Nepal, the base camp is easily reached by car, and the tent guesthouses are a popular place to stay while spending the night at the base camp. Authentic Tibetan tents, the guesthouses accommodate up to a dozen people in each, and it is the best place to stay from April to October for the morning view of the sunrise on the slopes of Mount Everest. 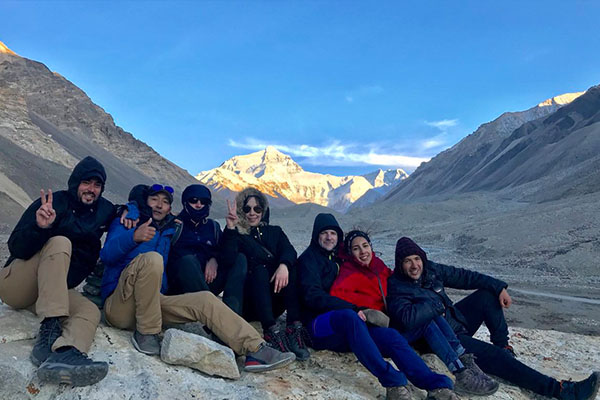 It's a good choice to stay one night at EBC to see the sunrise on the slopes of Mount Everest.

Best of the Central Tibet from Shigatse to Lhasa

After visiting the Everest Base Camp, you will follow the route from Shigatse to Lhasa to explore the central and southern area of Tibet. During the last section of the journey before reaching Lhasa city, you will visit the Tashilunpo Monastery in Shigatse, witness the Yamdrok Lake from the Gampala Pass and enjoy the marvelous view of the awesome turquoise Yamdrok Lake.

While there is decent three to five-star accommodation in the major cities of Lhasa and Shigatse, most of the places you will stay along the route in the outlying areas will not be of the same standard. Some of the guesthouses in the towns do not even have hot running water. Expect basic accommodation when out of the bigger cities, and very basic guesthouses when staying at Mont Everest Base Camp and other remote sites.

The road conditions along the route to Lhasa from Gyirong is good lately, with asphalt roads for most of the route you are taking. There are some dirt and gravel roads in places on the lesser highways and Provincial Roads, although even the road to EBC is now almost completely asphalted.

Altitude is the biggest danger for anyone traveling on the Tibetan plateau, and the high altitudes of Tibet can often cause altitude sickness if not acclimatized properly. On the route from Kathmandu to Lhasa, there is an opportunity to stop in Gyirong Town for a day or two to acclimatize to the intermediate elevation at 2,800 meters. This intermediate acclimatization will help with acclimatizing to the higher altitudes, often up to more than 5,000 meters, and the higher altitude of Lhasa itself.