Trekking in Tibet and Nepal: The Best Himalaya Trekking Experience in the World

Trekking in Tibet and Nepal attracts over half a million visitors a year. Sitting on the high Himalayas, which straddle the border between Nepal and Tibet, the lure of the mountains and valleys is encapsulating, and draws in new trekkers every year. From the stunning trails of Annapurna, Cho Oyu, Manaslu, and Langtang, to the spectacular, high-altitude treks of Everest Base Camp, Gama Valley, or Mt. Shishapangma on the Tibetan Plateau, there is nowhere else on earth that can bring the peace and tranquility as well as the sense of achievement that a Himalayan trek gives.

In Tibet, there are some of the world’s best trekking routes in Tibet, that bring you closer to nature with their stunning beauty and spectacular landscapes, such as the trekking tour from Old Tingri to Everest Base Camp. Nepal, a beautiful country with a well-established trekking tradition, offers a multitude of trekking options and trekking trails, such as the Everest Base Camp trekking tour in the southern face of Mount Everest, and the popular Annapurna circuit.

Trekking in the Northern Everest Base Camp in Tibet

For many people, the main reason that they go to Tibet is to see the amazing view of Everest’s famous North Face. The view of Everest from the Tibet side gives a clear, sweeping view of the mountain. You can drive all the way up to Everest Base Camp in Tibet, should you wish, but many travelers choose to make the two-hour hike at the end of the paved road. 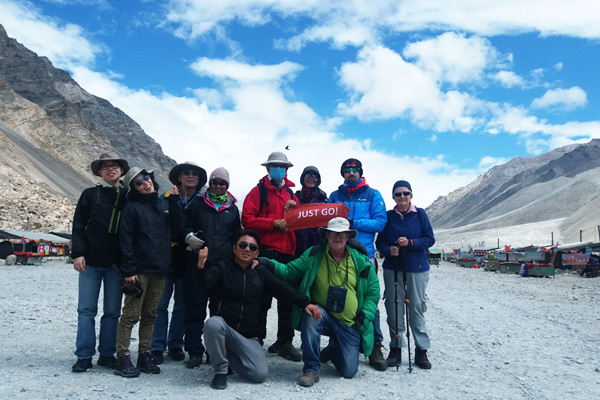 Trekking in the Northern Everest Base Camp in Tibet

However, for the more adventurous, there is also a 70-kilometer trek from Old Tingri to EBC, which takes four days and is done solely on foot, with the tour vehicle meeting you at the base camp itself, while you camp for the three nights of trekking. On the route to the base camp, you pass through some stunning valleys and see some of the world’s highest mountain landscapes. While it is not the hard trek style of Nepal, there is something of a challenge to walking somewhere when you can be driven to within a few feet of your destination. The trek which can be done at any time of the year, gives one a sense of achievement that only comes from doing something that few people do.

Trekking in the Southern Everest Base Camp in Nepal

Everest trekking in Nepal is undoubtedly one of the world’s best trekking routes, and thousands of tourists go trekking in Everest every year to see Everest and experience Sherpa hospitality. The Everest trek traverses the classic trail used by Tenzing Norgay Sherpa and Sir Edmund Hillary for their historic summit of Everest in 1953. 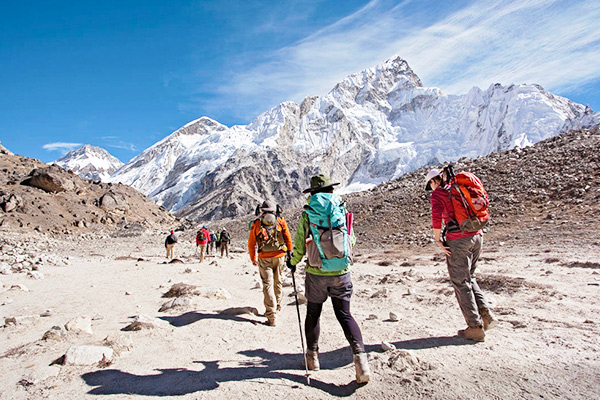 Trekking in the southern Everest Base Camp in Nepal

Situated North East of Kathmandu, the Everest trek is popular for Everest Base Camp and Kala Patthar. You will also get a chance to visit beautiful and vibrant town of Namche Bazaar and Lukla, Tenboche Monastery, Gokyo Lake, and many others. Everest is one of the global hotspots for ecological diversity as it is home to some unique wildlife species. The area is covered in forests of rhododendrons and pines and is drained by the famous Dudhkoshi and Bhotekoshi rivers. Panoramic views of several snowcapped peaks, such as Mount Makalu, Mt. Nuptse, Lhotse, and Ama Dablam, can be easily observed along the trail. Today the region is protected by the establishment of Sagarmatha National Park, which has been listed as a World Heritage Site by UNESCOc.

The Everest trek begins in Lukla, the gateway to the Everest region, and ends with a challenging walk to Everest Base Camp at 5,364 meters. The trail passes through Sherpa villages with well cultivated fields and small hamlets, interspersed with magnificent forests of rhododendron, magnolia and giant firs. You will have plenty of opportunity to learn about Sherpa culture and taste the Himalayan delicacies. The trek passes through famous viewpoints such as Tengboche Monastery, one of the biggest monasteries in the Everest region, and Kala Patthar will offer the best glimpse of Everest seen from anywhere in the world.

The Everest Trek can be organized at varying times of the year and for different durations. As such, you will have to keep in mind the issue of acclimatization and attractions while setting out your itinerary.

A “kora” is a trek around a holy site of the Buddhist religion. Thousands of people from all over the world come to Tibet to walk the kora around places like Mt. Kailash. The holy mountain is the most sacred of places for Buddhists from around the world. The Mount Kailash trekking tour is a challenging route, which is both physically and mentally challenging. The route around the mountain has an average elevation of around 4,700 meters above sea level, and at Drolma La Pass you will climb up to a heady 5,630 meters, before dropping down into the valley on the other side. 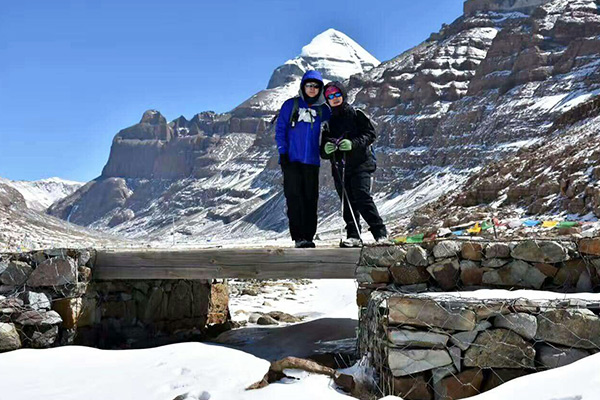 An old classic when it comes to trekking routes, this trek is one of the most famous and popular routes in China. The trek to Tsurphu Monastery is a relatively easy one, and the monastery itself is another major site of the Kagyu sect. Built at the end of the Tubo Dynasty of the Tibetan Empire, the Kagyu sect was the dominant religion in Tibet for more than 100 years. The second day of the trek takes you to Yangpachen, and its famous hot spring resorts. An abundance of geothermal springs, it is the ideal place to refresh after the trek.

One of the most sacred lakes in Tibet, Namtso Lake sees a large number of tourists and pilgrims every year who come to walk the kora around the lake. This spiritual and religious worship to the Tibetan gods is a huge part of both Tibetan culture and Buddhism. At an elevation of 4,718 meters, it is a challenging trek in high altitude that can take around a week to complete one circuit of the lake. 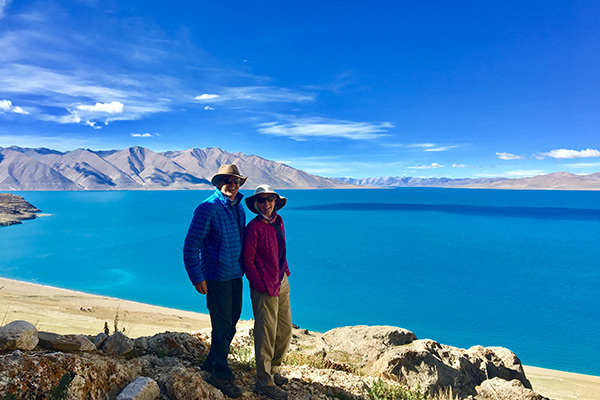 In Shigatse, in the south-east of Tibet, lies Gama Valley, a snow melt-formed valley surrounded by towering mountains. One of the most beautiful valleys in the world, it is a popular route for trekking in Tibet. The green valley, with its rare plants and varied wildlife is part of the Everest Nature reserve, and the home of the famous mountaineers, the Sherpas. There are four trekking routes through the valley, and it is not for the faint-hearted. The routes are all challenging and best for very experienced trekkers.

Situated near Pokhara, the Annapurna circuit is the most popular trekking region in Nepal, with almost a hundred thousand trekkers visiting ever year. As the first of the few trekking trails to be opened for trekkers in Nepal, this route offers you an opportunity to taste the amazing and magnificent Annapurna and Dhaulagiri Himalayan ranges along with a unique biodiversity and the culture of Thakali, Gurung and Magar communities. The region is home to Annapurna I, the tenth highest mountain in the world, and Dhaulagiri, the seventh highest mountain in the world. 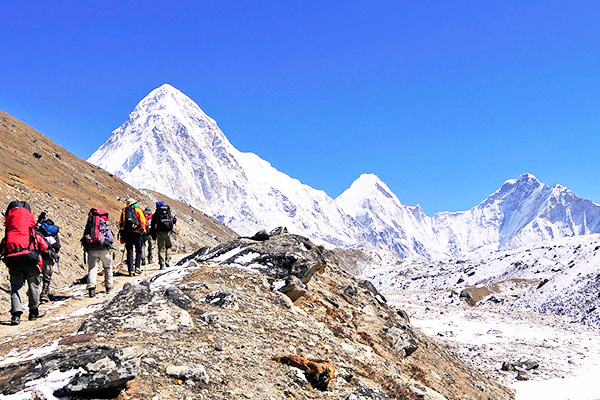 Langtang Trekking is located in the central part of Nepal quite near from Kathmandu and close to Tibet. It is one of the most easily accessible and easy Himalayan treks in Nepal. Langtang region is famous for Red Panda, Rhododendrons, Langtang Himalayan ranges, glaciers and Buddhist culture and heritage of Tamang and Tibetan communities. The culture of Tamang and Tibetan community possess a common linkage to Tibet.

Langtang has all the features and attractions that any world class trekking trail commands. But what makes it so different and unique is that thankfully it is one of the least explored and visited trekking areas in Nepal. It has become famous ever since the British mountaineer Bill Tilman described it as ‘the most beautiful valley in the world’.

0 Comment ON "Trekking in Tibet and Nepal: The Best Himalaya Trekking Experience in the World"